Heading out on the Paris to Mont St Michel Veloscenie bike route? Here are 7 things to factor into your itinerary.

We sent Tracy Melass and Chenél Ferreira off on Veloscenie and it was a hugely popular ride, with loads of you out there following the girls en route from Versailles to Mont St Michel.

So, just in case you're planning a similar trip yourself, here are a few things you should factor into your itinerary.

1. A brush with royalty

17th century Château de Maintenon was the private residence of Madame de Maintenon, the second wife of King Louis XIV. Its gardens still carry the aura of royalty – there's even an aqueduct.

To find out how French regency travelled, check ot the gallery of horse-drawn carriages at the Palace of Versailles.  Having been kept under lock and key since 2007, the gallery is reopening on May 10, 2016. See chateauversailles.fr.

For English history, the castle town of Domfront (beware the steep climb to hte top!) hosted a succession of English kings and queens. The tourist office has a mobile app for signposted bike routes that take you to all the key sites in the area.

Visit the world’s only fragrance archive, Osmothèque, as you pass through Versailles. It's got more than 3,200 different scents, including 400 that are are no longer available. See osmotheque.fr.

From April 22 to October 7 you can see the mediaeval centre of Chartres lit up with illuminations that are projected across the city from the cathedral crypt to the waterways. See chartresenlumieres.com.

Relax those weary muscles with a massage in the spa town of Bagnoles-de-l’Orne – the only thermal spring in north-west France. See bo-resort.com.

5. Get back to nature

Want panoramas? Between Thiron-Gardais and Nogent-le-Rotrou lie some of his most beautiful panoramas of the Perche, including the Route the Balconies loop.

Or get lost in the forest park Espace Rambouillet Sonchamp, which is home to owls, deer and wild boar. It also has a range of activities for kids (big and small), with plenty of animals to feed, horses to ride and eagles to tame. See espacerambouillet.fr

You can’t go all the way and not spend some time pottering around the Bay of Mont Saint-Michel with its record tidal shifts. You can take a guided tour with a local expert (ask via manchetourisme.com). Don’t forget to ask about the dungeons in the 8th century abbey, and check out the beautifully preserved Carolingian chapel (See abbaye-mont-saint-michel.fr) 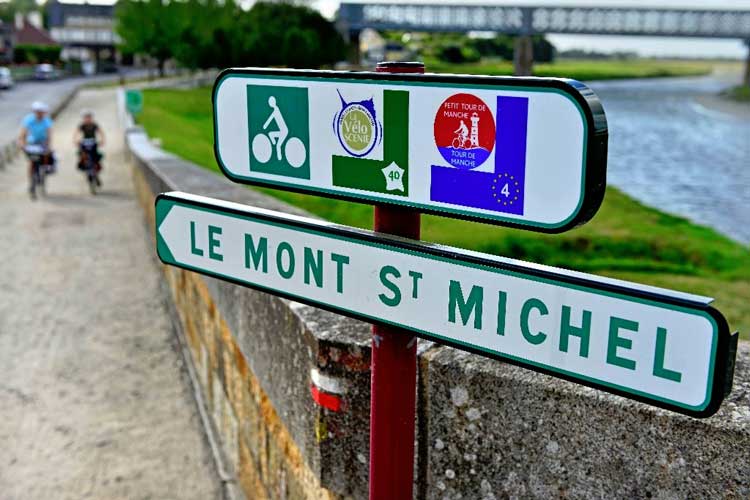 Swap protein bars for local produce – pick your own season fruit and veg at the 125-acre Ferme de Viltain. Entry is free – just pay for what you pick. See viltain.fr.  For something that requires less effort (but deeper pockets), in the heart of medieval Chartres is Le Saint-Hilaire, a Michelin-starred restaurant that prides itself on local produce (think farm cheeses and Percheron snails…) See restaurant-saint-hilaire.fr.

Indulge in a cone of handmade ice-cream or sorbet – from mocha to mint – made by Herdis Paesen in the village of St Langis les Mortagne. See r10glaces.com.

Or look up Bruno Slagmulder, an actor who makes saffron-infused goodies – think breads, chocolates, macaroons and jams – in the Perche Natural Regional Park.

For more Veloscenie inspiration, go here. We also have this list of things you need to know before you go.