The Trans-Ardennes bike path goes from Charleville-Mézières to within spitting distance of Belgium. Gerry Patterson follows one of France's least-explored but best developed greenway routes. 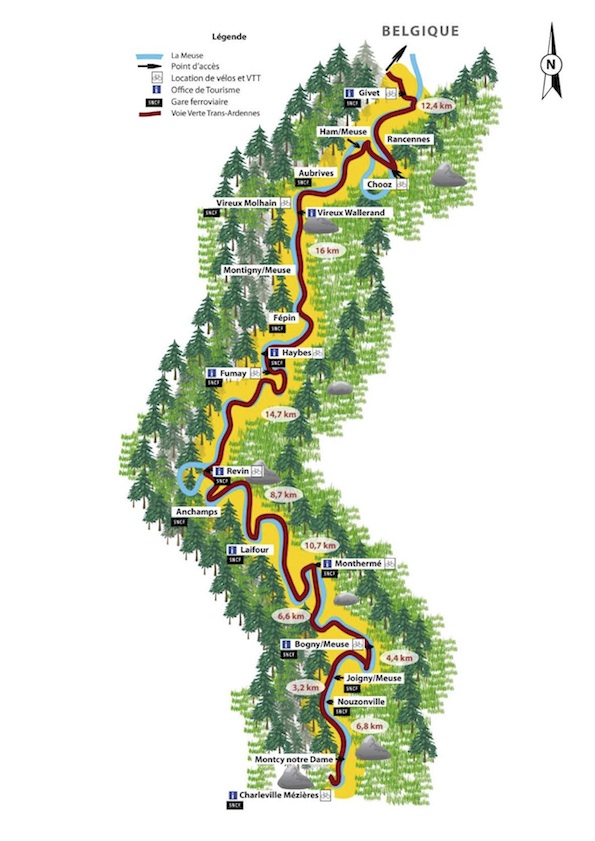 The Ardennes is an area of vast forests, rivers and hills that covers bits of France, Belgium and Luxembourg.

The French Ardennes is a departement, and part of the Champagne-Ardenne region.

It's sparsely populated, culturally interesting, and full of nature. And it's crying out to by cycled.

The centrepiece of the department's cycling infrastructure is the Trans-Ardennes Bike Path (voie verte in French), which runs from Charleville-Mézières in the south, to Givet in the north, at the border with Belgium.

Nearly the entire 83km runs right beside the lovely, meandering Meuse River, and it forms part of EuroVelo 19, the Meuse Cycle Route.

The flat, paved, multi-use path has been built over the old towpath that ran the length of the river, much the same as parts of the Canal du Midi in Languedoc.

The bike path starts just outside the capital of the department, Charleville-Mézières, a modestly populated (50,000) city that was built in the 17th century by a Franco-Italian prince named, yes, Charles.

He actually constructed the ‘Charles’ part of the modern-day city, and the much older Mézières was more recently attached.

Click map to enlarge. It can also be downloaded here.

Charleville-Mézières' most famous son is the ‘decadent’ poet Arthur Rimbaud. There is the Rimbaud Museum in his honour (Quai Arthur Rimbaud, naturally), and places he used to frequent, like Bar de l’Univers, in front of the train station also survive.

The impressive main square (and it is totally square) is the Place Ducale, a grand public space with beautiful symmetry. It was built by the brother of the architect who conceived of the beautiful Place des Vosges, Paris’ oldest planned public square, and the similarities are evident as soon as you place one step inside.

This region has a long industrial past, particularly in metalworking. At one point before the Industrial Revolution there were 8000 people employed making nails here. Up until the 1970s the Meuse River valley thrived on industry. Still today the majority of workers are employed in factories in the Ardennes, but these factories are shutting their doors one after another, much like in other parts of the developed world. Along the voie verte you will find information boards that give (bilingual!) information on the interesting history of this proud area. For more on the Ardennes’ industrial past, stop in at the Musée de la Métallurgie Ardennaise (in French) at 103 rue de la Vallée, Bogny-sur-Meuse. The river, with its canals and locks previously reserved for industrial barges, is now a popular waterway for pleasure boats (it's possible to take a boat from Holland, through here and down to the south of France using the canal systems).

The bike path is part of France's ever-expanding network of greenways.

It doesn’t mess around at all with ugly suburbs or industrial parks; it's clean and green as soon at you start pedalling, just outside the city limits in Montcy-Notre-Dame.

The first town of any size you reach is Nouzonville, which really doesn’t have much to recommend it, except the warm welcome you will receive at Le Temps des Cerises, a B&B run by M. and Mme. Dié. They are locals and have a wealth of knowledge on the history and culture of their region. The charming B&B also hires out bikes, if you aren’t taking along your own.

A little over half-way up the river is the pretty town of Haybes, a good place to spend the night if you're breaking the ride into two days, or even as a base for exploring the forests on either side of the Meuse.

The Saint Hubert Hotel is a very good two-star option that has a great (and popular) restaurant, serving up local cuisine. (If boudin blanc is on the menu, order it!)

The Trans Ardennes Bike Path ends at Givet, with its hilltop fortress. From here you can turn back and enjoy the voie verte in reverse, or continue on into Belgium (only 2km away) and hook up with that country’s network of cycling routes, which can take you through to Holland, Germany or Luxembourg. You're never far from a picnic spot on the Trans-Ardennes bike path.
Photo: Gerry Patterson

Not on the bike path (yet) is the old town of Sedan, 25km from Charleville, which is well worth a visit if you have time. It's home to the largest medieval fortress in Europe, which itself now houses an excellent bicycle-friendly 3-star hotel and restaurant, Hôtel Le Château Fort. For bike rental options, see our listings for bike hire in Champagne-Ardenne.

The tourist office in Charleville-Mézières is at 24 Place Ducale, right on the main square. It has copies of the ‘Road Book’ (Carnet de Route), which is a handy map booklet of the ride.

For more on the Trans-Ardennes bike path, including a downloadable road book, maps and brochures, see the Voies Vertes website.

For more on the French Ardennes department and other things to see and do while you're there, see the tourism website. For region-wide information, see the Champagne-Ardennes website. The region will eventually have a network of more than 1000km of cycling paths, with almost half of these already in use.

There are maps and guides available with many mountain bike (VTT) routes in Champagne-Ardennes – see the tourist website for routes and maps, or ask at bike hire shops in the area. A new park, the Parc naturel régional des Ardennes (in French) will also feature mountain bike (VTT) facilities.

Getting to the French Ardennes

Charleville-Mézières is 1.5 hours by TGV from Gare de l’Est in Paris. All the TGVs on this run have space for bikes, but you must reserve in advance. There is a bike-friendly TER (local train) that runs alongside the Meuse River. You can simply wheel your bike on this train, with no reservation necessary. In the summer you can buy a Pass Ardenne day ticket for €6, allowing you to hop on and off as you like. See voyages-sncf.com for train times and ticket prices. See also our information on taking bikes on French trains. In Charleville-Mézières, try the Hotel De Paris or César Hôtel – all adequate but basic two-star options.

In Haybes, there's the Saint Hubert Hotel; in Nouzonville, try the Le Temps des Cerises B&B. If you make it to Sedan, Hôtel Le Château Fort is great value considering it's housed within the walls of the old fort.

Check here to do your own search for other accommodation in the area, including hotel, gîte, B&B, self-catered and campsite options.

IGN and Michelin both have a regional map for Champagne-Ardenne. English-language books on the region are hard to find; for French readers, there's a Michelin Green Guide and a Routard guide.