The Tour de Manche bike route is a cycling route linking Devon and Dorset  in England to Brittany and Normandy in France, writes Lynette Eyb. 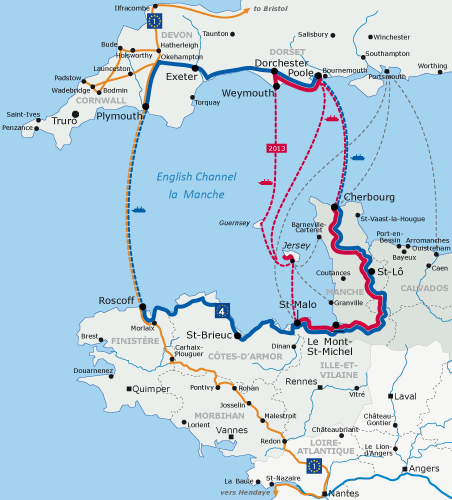 The Tour de Manche bike route is a cross-Channel signposted cycle route linking Devon and Dorset in England to Brittany and Normandy in northern France.

It gives cyclists various options for exploring the south of England and the north of France using the English Channel ferry services to hop between the two.

The main Tour de Manche route (marked in blue on the map) is 700km long and takes in Morlaix Bay and Mont Saint Michel on the French side, and the Jurassic Coast and Dartmoor National Park on the English side.

A shorter Petit Tour de Manche route (marked in red on the map) offers an abbreviated version, covering just 440km, but still including Mont St Michel and the D-Day beaches in Normandy.

The ferry ports at Roscoff, St Malo, and Cherbourg all feature on the route, giving cyclists the option of cycling the entire network or choosing a smaller section to cycle.

The route on the English side of the Channel links Plymouth to Roscoff, and continues down the Atlantic Coast of France as part of the EuroVelo 1 bike route, La Velodyssey.

Across the top of France, the section of the Tour de Manche from Roscoff to Carentan forms part of the EuroVelo 4 cycling route that eventually leads to Ukraine.

An overview of Le Petit Tour de Manche from the official website.
(Bit baffled by the the percentage of greenways used for the Mortain > Ducey section, but impressive nonetheless). 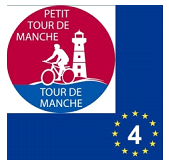 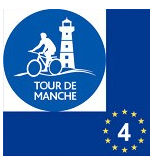 Both the Petit Tour de Manche bike route and the main Tour de Manche cycling route are signposted routes – these are the signs used in Brittany and Normandy on the French side of the English Channel.

The official website has detailed route information, plus GPS trackers, and key points of reference along the way.

Cycling accommodation in Normandy and Brittany

To find a bike-friendly place to stay, zoom in to see the B&Bs, hotels and self-catering options on our map below, or search our Where to stay section.

There are several companies offering self-guided cycling holidays along the routes of the Tour de Manche, as well as on some inland routes. Tours around Mont St Michel and coastal routes are particularly popular. Most include accommodation, route notes and maps, plus local support and advice. Bike hire can usually also be arranged on request. You can search our organised tours section here.

More information on cycling in Normandy

We have more information in the site for cycling in northern France, starting with our cycling guide to Normandy. We also have a page dedicated to website links and maps for Normandy. See also our overview of seeing Mont St Michel by bike.

For accommodation for cycling in Normandy, see our Where to stay section. See here for bike hire in Normandy.

See our guide to cycling in Brittany and our further article on cycling Brittany's greenways. South of the Tour de Manche, we have guides to cycling the Nantes-Brest Canal, St Malo, Quimper, Vannes, Rennes and Dinan.

For accommodation for cycling in Normandy, see our Where to stay section. See here for bike hire in Brittany.