After three days of cycling La Sarthe à vélo, Jacqui and Adrian Brown had a day off in Le Mans to explore the city. Jacqui writes ... 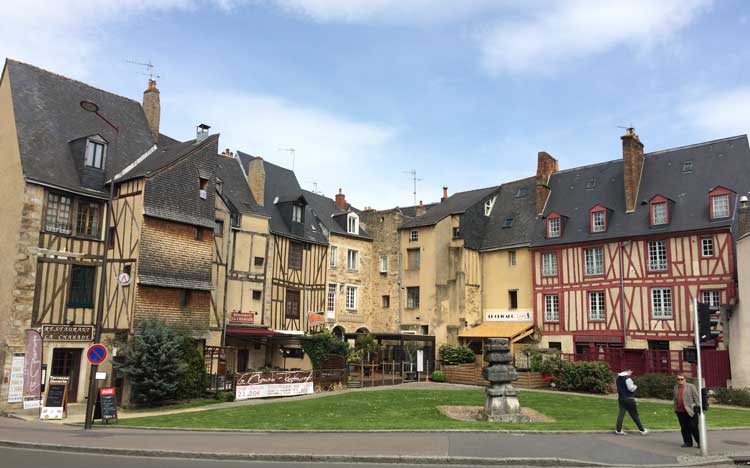 A day off from cycle touring didn't mean a lazy day lounging around and putting our feet up. Oh no, Le Mans is far too interesting for that, although by the time we returned to our comfy cabin at the end of the day I was more tired than I’d been after a day on the bike, and disappointingly there was so much we hadn’t had time to see. Everyone knows about the 24 Hour circuit, but there is so much more to Le Mans than that.

The morning began with a coffee in the medieval cobbled streets of the Plantagenet City where the timber framed buildings crowd together in the narrow streets and hidden clues to life many years ago are all around. 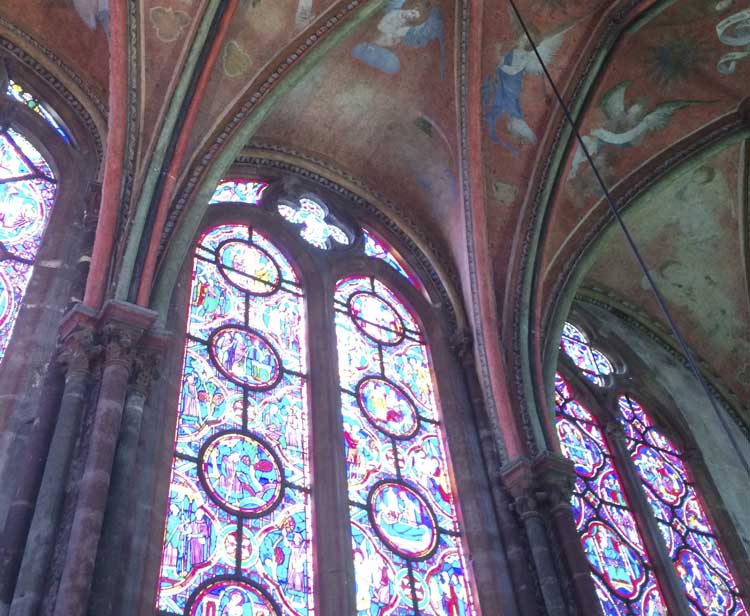 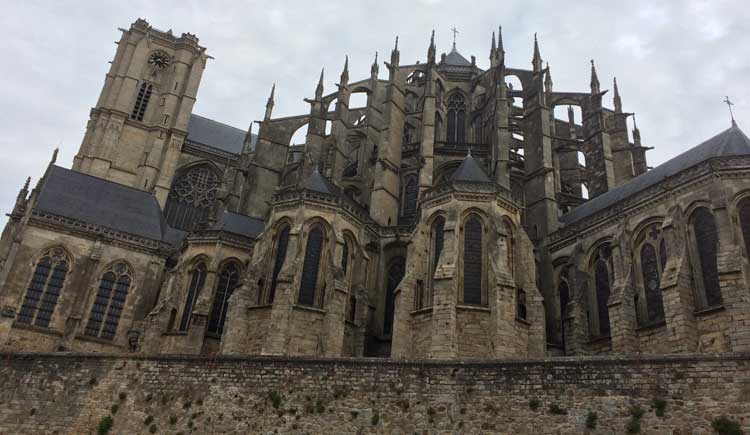 The first part of the cathedral was constructed in the 5th century and in order to encourage the pagans to come and worship, a Menhir (standing stone) was (cunningly) propped against an outside wall. Once they were outside, they were led inside and eventually converted to Christianity. A bit like Adrian, really. I didn’t want to mention to Patricia and Jacqui, our guides for the morning, that getting him inside a church or cathedral is a very rare occurrence, however they were able to bring history to life and he was certainly interested in its architecture and how the structure evolved after several extensions were added over the centuries.

If you happen to be visiting on a Wednesday morning, Friday (all day) or Sunday morning, at the base of the cathedral is the Jacobins market where you will find a great selection of local produce that will make a tasty picnic treat.

The cathedral is also lit up every July and August as part of the city's annual illuminations.

We took a quick tour of the old Plantagenet city and we learned that the pillars and colours of the old buildings played a useful part in their history. In an age where most people couldn’t read, the markings and colours on the pillars were essential for finding your way around, “head to the pillar with the keys, which you will find two doors down from the blue pillar”.

It was also interesting to discover the large stones, still found leaning against the buildings in the cobblestoned streets, were useful for restricting damage done when carts rattled around narrow corners, but were also handy for tying your horse to as well. As this part of Le Mans remains very authentic, it is regularly used as a location for films, including The Man in the Iron Mask, although there were no film stars there during our visit.

Le Mans played an important part in the history of the Plantagenet monarchy of France, but as there was quite a relationship between them and the English monarchy of the day – with many being rulers of England and part of France at the same time – it is steeped in English history too.

In the Abbey de l’Epau, at the edge of the nature reserve just to the east of the city, we paid our respects to Queen Bérengère, the Queen of England and widow of Richard the Lionheart. She founded the abbey after his death and spent her remaining days there. While not as ostentatious as the cathedral, the abbey is still beautiful and can be visited via a 23km cycle circuit called Le Mans – L’Abbaye de l’Epau et la Reine Bérengère (ask at the tourist office for a brochure).

If you are looking for traditional Sarthoise cuisine, I can recommend a meal at Aux Cocottes Sarthoises in the medieval town. Their specialities are the one-pot casserole dishes of the region, served in the individual cast iron cooking pots. We enjoyed the fricassée Sarthoise, a chicken, rabbit and vegetable dish in a creamy white sauce as part of their €18.90 two-course discovery menu.

We also stopped for a real French lunch (almost two hours long) that involved three delicious courses and a selection of local wines at I’Un Des Sens, a wine and food cave. It was very busy, so reservations might be necessary, but I can recommend it as the food was superb and the owner was the most wine-knowledgeable person I’ve ever met and his selection of the local Jasnières white and Coteaux du Loir red wines were very drinkable, even at lunchtime. I would have liked more time to wander the old medieval streets, but in the distance we could hear the engines roar as a track day was in progress at the 24-hour circuit and we just had to visit the on-site museum ..

Anyone with an interest in engines, cars and racing really should make a pilgrimage here and my other half, Adrian, was in his element. It is so much more than a collection of old racing cars. Since its conception in 1906, the Le Mans 24-hour race has been used to test new ideas and designs, many of which were successful and are now commonplace in the cars we drive every day. 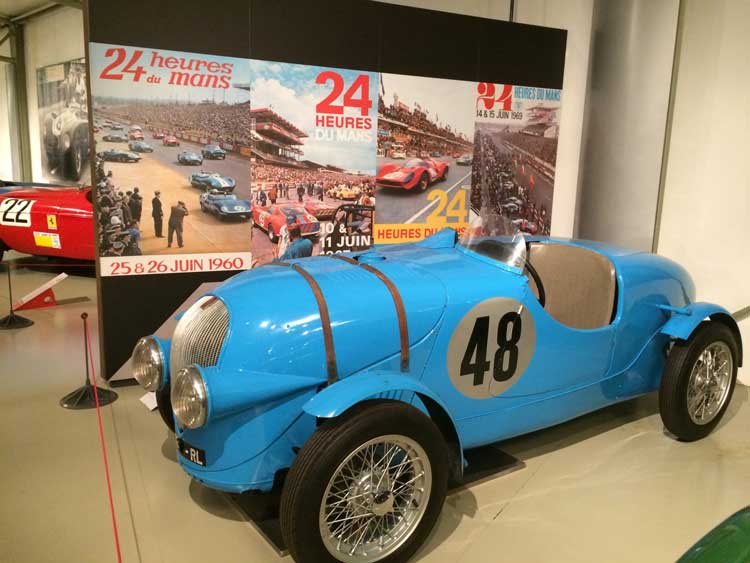 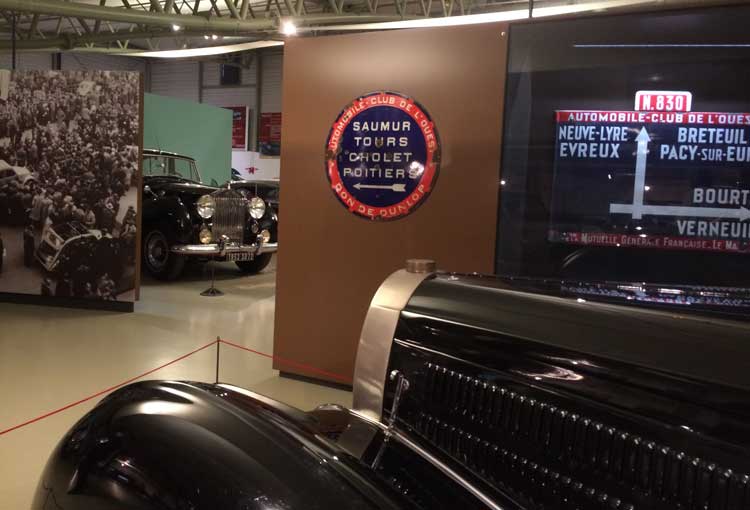 Our guide had every fact, date and driver anecdote in his head and ready to share and we were an enthusiastic audience. The smell of engines, leather and polish just added to the excitement of learning about the history of the race and getting close up with many of the cars that have raced there in the last hundred years. We were even lucky enough to meet a few retired drivers, smartly attired and seemingly just passing by to say hello and have a quick look at the cars they used to drive. I had to drag Adrian away. See the Musée des 24 Heures du Mans website for opening hours.

In short, one day really isn’t enough if you want to explore Le Mans in any detail, so I’m hoping to return again one day.
Le Mans tourism information website.