We profile the voie verte linking the ferry port in Ouistreham to Caen town centre, giving you access to northern France via Normandy.

An easy 15km bike ride along an established voie verte or greenway route links the ferry port in Ouistreham to Caen town centre, providing easy access to Normandy for cyclists arriving by bike on ferries from Portsmouth.

The voie verte runs alongside the Canal de Caen à la Mer, which in turn runs parallel to the River Orne. The canal is one of France's best established, having been started in 1837, with the thoroughfare opening to boats 20 years later. It has two locks, the one near the port at Ouistreham is large enough to allow ships of more than 200m through.

The bike route passes over the Pegasus Bridge, which crosses the canal near Bénouville. The bridge is significant in World War Two history, having been named after an Allied operation in the opening hours of the Normandy landings.

Britain's 6th Airborne Division was ordered to take and hold the bridge to limit the success of German efforts to make inroads into Allied-held territory. Pegasus was on the shoulder emblem of that division. The bridge seen today, however, is not the original, but a reconstruction; the original is now in a museum. 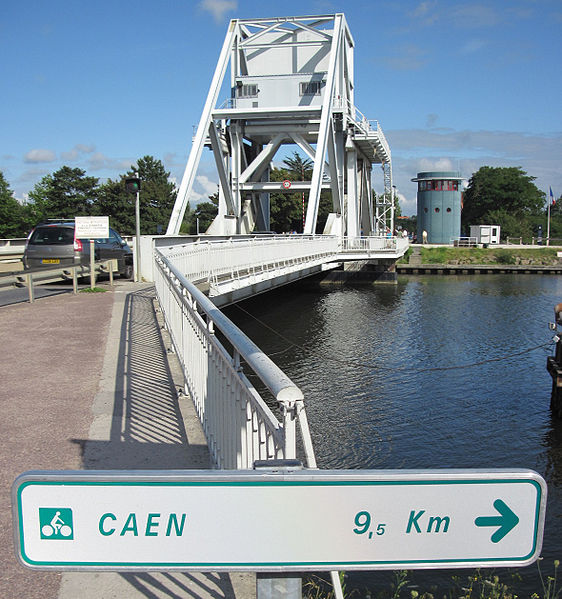 Above: The Pegasus Bridge on the voie verte between Caen and Ouistreham is historically significant thanks to its role in protecting Allied gains following the D-Day Landings.
Photo: Man Vyi
Right: The entire voie verte from route from Ouistreham to Caen. Map: voiesvertes.com, which has additional information on this route in French.
Below: Ouistreham town centre, showing how to access the bike route from near the tourist office in Ouistreham. Map: voiesvertes.com, which, again, has more information in French. 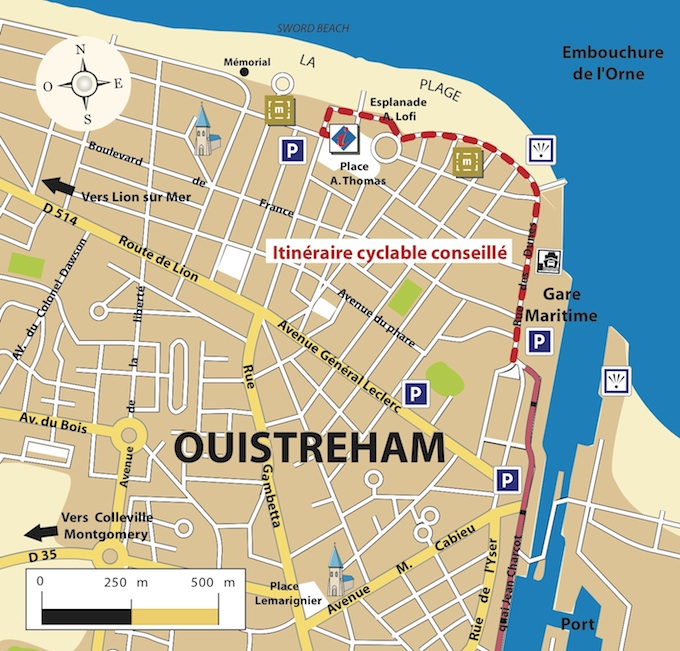 Brittany Ferries operates services from Portsmouth to Caen. You can book your bike when you reserve your ticket online.

Caen is a good starting point for rides out to the D-Day Beaches, and it's also a good access point for the Tour de Manche bike route that links France to England. EuroVelo 4 passes across the top of France and takes in Caen (see here for other EuroVelo bike routes in France).

Mapmyride has more than a dozen mapped routes around Caen. See also our overview of biking in Normandy and our Normandy cycling links page for more local contacts. The Normandy Tourism website has more ideas and suggestions, while the Calvados tourism website has links to downoads and maps for routes throughout the department.

Accommodation and bike hire in Caen

Search our Organised tours section for self-guided rides in Normandy. See also this information on organised cycling tours in France.