A cycling guide to Mont St-Michel in Normandy

Jean-Louis Guéry, author of The Normandy Coast from the Air, takes a tour of the Bay of Mont St-Michel, one of the most spectacular bike routes in France and now linked to Paris via the Veloscenie bike route. 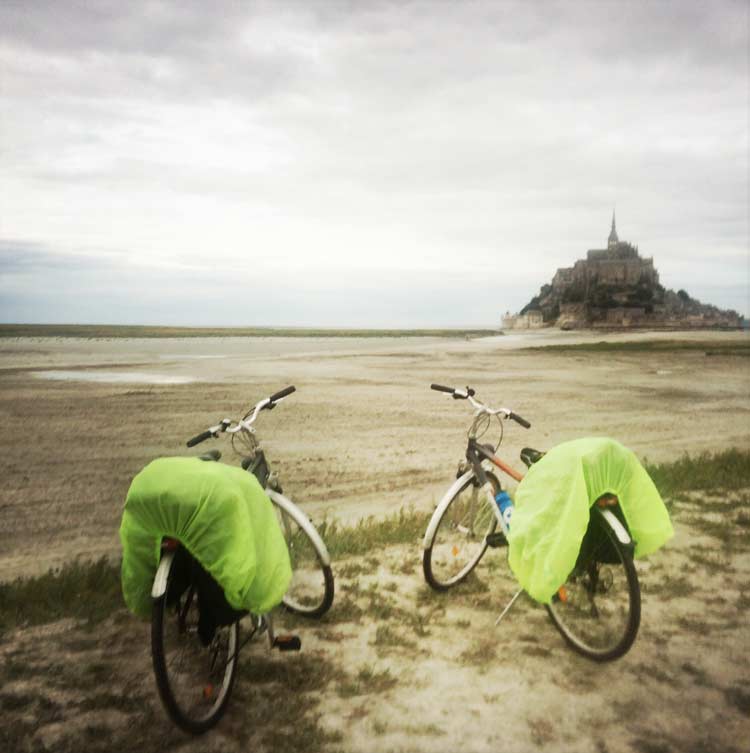 All roads lead to the Bay of Mont St-Michel. Photo: Chenel Ferreira

Ride the Véloscénie bike route from Paris to Mont St Michel with us here.

On the cusp between Brittany and Normandy, the Bay of Mont St-Michel is a unique, dramatic seascape. Sheer cliffs at each end embrace vast acres of sand and mud which cover and uncover hypnotically with each tide. The geometric patterns of oyster beds on the sands give way to mudflats with abundant wildlife, then salt marshes, and finally lush meadows where sheep graze.

The famous landmark of Mont St-Michel rises majestically from the edge of the sands, lapped by the sea at high tide. Within that great inlet between Pointe du Grouin and the Champeaux cliffs, the flat sands and marshes of the Bay of Mont St Michel stretch as far as the eye can see. The muted colours of the sea, the muddy sand and the lonely marshes often merge in haze to create a strangely mystical landscape. Over the centuries, man and nature have achieved a striking equilibrium on this special part of the coast. The rhythm of tides and seasons ensures a rich variety of wildlife, while in this apparently fragile environment, one of the architectural jewels of history has been built – the haunting silhouette of Mont St-Michel.

The cliffs of Pointe de Champeaux end abruptly at Saint-Jean-le-Thomas where the tiny Mill Brook spills out. This charming village is well known for its warm microclimate and used to be called the Nice of the English Channel. It is here that the Bay of Mont St-Michel really begins. At low tide, the flat coastline reveals wide stretches of sand where a few shellfisheries still work. Lonely dunes fringe the beach all the way to Bec d’Andaine, where the salt meadows begin, locally called herbus.

The best way to discover this coast is by following the minor road from Saint-Jean-le-Thomas to Genêts, which passes through Obrey and Launay and close to the Manoir de Brion, where during the 12th century, many pilgrims stayed before crossing to the Mont. Running between the D911 and the coast, this route has beautiful views over the marshes and the dunes across the bay, with plenty of small tracks en route for detours.

At Vains-Saint-Léonard, you can visit the Maison de la Pêche à Pied (Cockling and Winkling Museum), where an exhibition of paintings, photos, tools and machinery shows the different techniques used in the bay for this type of fishing. During the era of religious pilgrimages, this tiny village on the edge of the bay received plenty of visitors. From Bec d’Andaine, the faithful would set off across the sands to reach Mont St-Michel. The six-kilometre crossing was often dangerous owing to the speed of the flood tide and the quicksands. Whilst serious accidents are now rare, you should always take an experienced guide when venturing onto the bay on foot.

High on a hill on the south bank of the River Sée, Avranches overlooks the bay. Avranches is a fascinating town to visit – don’t miss the church of Saint-Gervais, a walk around the Botanical Gardens, or a visit to see the famous manuscripts of Mont St-Michel Abbey.

The leafy valley of the Sélune River is rich in flora and fauna. The river rises close to Saint-Cyr-du-Bailleul and joins the River Sée south-west of Avranches before flowing into the bay. The bay is an important habitat for the English Channel and North Sea, because very young flatfish grow here, particularly sole and plaice. It is also a staging post for many species of migratory fish and an area much appreciated by dolphins. Vast numbers of migrating and indigenous birds are also an essential part of this ecosystem.

Economically, the bay claims to have the largest flocks (about 7,000) of salt meadow sheep in France, and it produces up to 10,000 tons of mussels and 3,000 tons of oysters annually. But perhaps the most significant contributors to the local economy are the two million or more tourists who visit the Mont every year.

This amazing corner of the bay is Brittany’s largest producer of shellfish. At low tide you can see forests of black stakes in the sand which are covered with the millions of mussels cultivated here. Between Cherrueix and Saint-Benoît des-Ondes, the mussel farms cover almost 300 square kilometres on the fringes of the bay.

At Saint-Benoît-des-Ondes you can also see numerous V-shaped fish traps on the foreshore. The Saint-Benoît traps are made of stakes and brushwood, and the main catches today are plaice, sole and brown shrimps. The rights to these fish traps are passed down through families and date from the 17th century.

A short detour inland brings you to Mont-Dol, another granite outcrop of the same geological period as Mont St-Michel and Tombelaine. Follow the D155 from Vivier-sur-Mer for about four kilometere to the foot of Mont-Dol and a path up the north side to the chapel on the summit. From here, on a clear day, there are wonderful views back to Mont St-Michel. Near Dol you can find one of the largest megaliths in Europe, 9.5 metres high.

After Saint-Benoît you come to Cancale, one of Brittany’s most picturesque fishing harbours. The next bay you reach is Port-Pican. Several local boating clubs are based here, with water-skiing, scuba-diving and sailing all very active during the summer. Port-Mer is another popular anchorage and a pleasant holiday destination with hotels, restaurants and open-air cafés around the beach. A walk out to the tip of Pointe du Grouin gives one of the best views of the Bay of Mont St-Michel.

Our overview of the Bay of Mont St-Michel is an edited extract from The Normandy Coast from the Air: Cap de la Hague to Cap Frehel by Jean-Louis Guéry, published by Adlard Coles Nautical. The paperback version carries excellent colour maps of the area, with minor coastal roads and campsites clearly marked.

Cycling the Bay of Mont St-Michel

It doesn't matter which way you cycle around the bay – the views are equally impressive. The D911 from near Carolles on the east side of the bay follows the coast south to Avranches, where it becomes the N175. Keep following it south around to Pontaubault, where it becomes the D43 and then the D275. At Mont St-Michel the road (now the D976) heads inland for about 4km before you head west on the D797, back towards the bay. Keep following it along the coastal as it heads through Saint-Benoît-des-Ondes and Cancale as the D155 and then the D76 to Pointe de Grouin, the tip of the western peninsula. All along this route there are ample opportunities to take detours or make stops on smaller local roads.

The Brittany Ferries website suggests a 190-mile circular route starting in St-Malo and taking in Cancale, Mont St-Michel and other key points in the area.

Mont St Michel is linked to Paris via the Véloscénie bike route. There are more links to other information and maps on cycling in Normandy here.

Getting to Mont St-Michel

The D201 follows the coast from just north of Cancale and continues around the peninsula to St-Malo, which has a daily Brittany Ferries service from Portsmouth. The ferry port a short ride to the town centre; the railway station and its links to Rennes and Brest is 850m from the port.

The official Mont St-Michel website has lots of information and links, inlcuding accommodation options. Remember that nearby the Mont is one of France's top tourist attractions, so book accommodation in advance in July and August, as well as during other holiday periods and over long weekends.

Search Brittany and Normandy in our Where to stay section for links to bike-friendly accommodation, including hotels, gîtes, gîtes d’étapes, B&Bs, self-catered and campsite options, or zoom in and click on the icons on the map below.

Camping France lists lots of campsites – mostly within a few kilometres of the bay – within easy reach of Mont St-Michel. Most campsites will be marked on local maps and are well signposted from the road.