Mike Wells, author of The Rhine Cycle Route guidebook, has this overview of the French section of the EuroVelo 15 bike route, which passes through Alsace.

We can help with bike hire on this route

The Rhine Cycle Route follows Western Europe’s longest river all the way from its source high in the Swiss Alps to its estuary on the Dutch North Sea coast, a bike ride of 1378km. 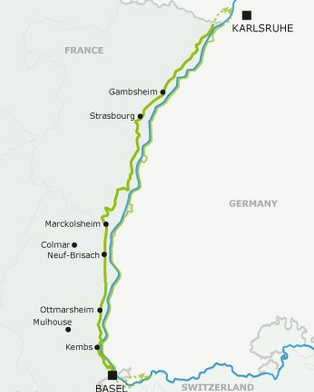 A strong cyclist should be able to complete the route in two weeks, a more leisurely ride allowing time for sightseeing en-route could take three weeks to a month. The route runs through France for 200km, entirely in Alsace, running from the suburbs of Basle through Strasbourg to the small border town of Lauterbourg, 20km south-west of the German city of Karlsruhe. The French part of the route can be cycled at any time of year, but is best between May and October.

As we report in this overview of EuroVelo cycle routes, The Rhine Cycle Route – or EuroVelo 15 – is part of a network of long-distance cycle routes set-up by the European Cyclists’ Federation, a Brussels-based organisation that brings together the various national cycling organisations throughout Europe. See also our article on EuroVelo routes that pass through France. 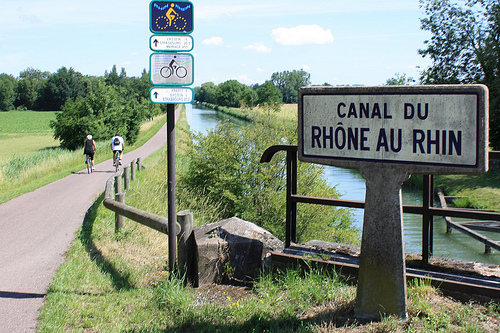 In France the Rhine River Route uses a mix of canal towpaths, forest tracks and riverside flood dykes with only a few very short stretches on mostly quiet roads, usually with a cycle lane. The towpath of the Canal du Rhone au Rhin, which is followed for 60km, has been reopened and surfaced in accordance with national voie verte standards as a 3m-wide asphalt cycle track.

This part of the route is entirely flat, following the wide flood plain of the middle Rhine with the Vosges Mountains in the distance to the west, and the Black Forest across the river in Germany to the east. It is mostly asphalt surfaced, though there are a few short stretches of unsurfaced but well compacted and easily cycleable gravel track along canal towpaths. It is well suited to mountain bikes, hybrids and tourers, and almost all is also rideable on a narrow tyred racing bike. Indeed at weekends the towpath stretch between Marckolsheim and Strasbourg is well used by Lycra-clad speed merchants.

Using a grant provided by the EU, the French Rhein/Rhin Route has been comprehensively waymarked with blue/yellow signposts that show a cycle with its wheels formed from the circle of stars in the European flag. It is almost impossible to get lost. 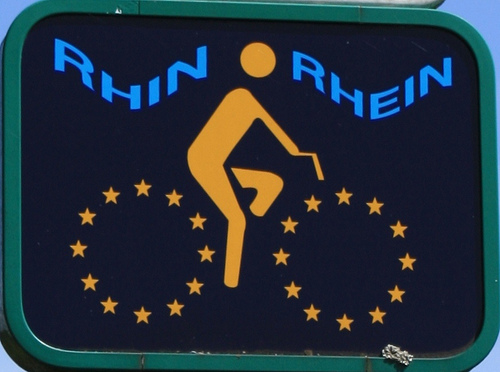 The distinctive blue and yellow signposts that mark EuroVelo 15, making it almost impossible to get lost. Photo: Mike Wells

Although the going is easy, there are some long stretches between towns and cyclists should carry ‘get you home’ spares and tools, such as pump, spanners and spare tubes. There are cycle shops in most towns capable of undertaking more demanding repairs.

Places of interest along the Rhine River Cycle Route

Basle, the city astride the Rhine at the meeting point of France, Germany and Switzerland, has an attractive old town, gothic cathedral, quaint cable operated ferries and a variety of museums.

Neuf-Brisach is a purpose-built fortified town, designed by the military engineer Vauban in 1697, encircled by a complex system of bastions and moats.

Marckolsheim is a small country town with a museum to the pre-Second World War Maginot line fortifications that run nearby.

Strasbourg, medieval city and regional capital, is the jewel of eastern France. The old town on an island in the River Ill has a soaring cathedral and the Petit France district of pretty canalside half-timbered houses, many of them now restaurants and bars. A truly European city, there are modern buildings for the EU parliament, Court of Human Rights, Council of Europe and EU Ombudsman in the European Quarter.

Munchausen is a delightful sleepy village by a wildfowl reserve on the banks of the River Sauer.

Lauterbourg, the most easterly town in mainland France, has ruined fortifications and an attractive town centre.

Just off-route, short excursions along surfaced canal towpaths can be made to visit Mulhouse and Colmar. 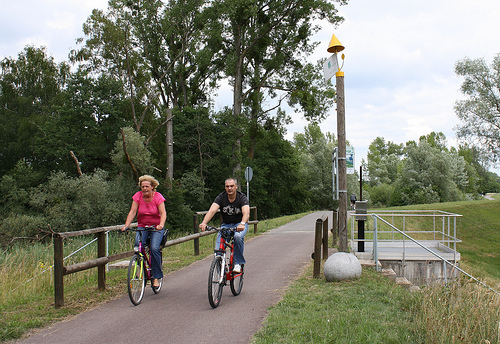 Regular German trains that will carry your bike run from Karlsruhe to Basle, enabling you to get back to the start.

Other alternatives for circular excursions include following the Canal du Marne au Rhin from Strasbourg to Nancy, then the Moselle cycle route to the source of the Moselle on the slopes of the Vosges. Cross the Vosges by the quiet and easily ridden col du Bussang or the more challenging Col du Ballon (the first ever mountain stage of the Tour de France, used in 1905) to Mulhouse and return to Basle.

Cross the Rhine at Lauterbourg and return along the German side of the river through Kehl and Breisach to Basle. This is waymarked Deutsches Radweg 8 (D8), but uses mostly dusty unsurfaced gravel tracks along the Rhine flood dyke. 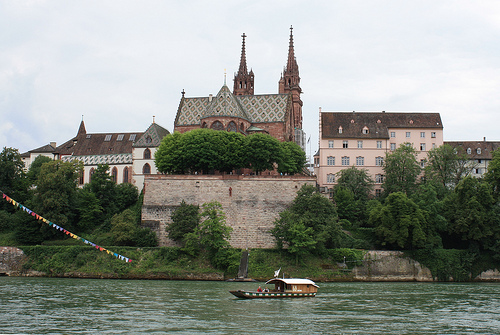 There are many places to sleep with everything from bed and breakfast accommodation all the way to five-star hotels. There are three youth hostels (Basle, Mulhouse and Strasbourg) and official campsites at Huningue (Basle), Obersaasheim, Neuf-Brisach, Marckolsheim, Strasbourg, Selz, Munchausen and Lauterbourg. Booking is seldom necessary. See also our Alsace accommodation page, or browse the map below.

Restaurants abound. The most typical Alsatian snack is Tarte Flambée, a kind of white thin-based pizza topped with cheese and bacon. For a hearty meal try Choucroute garnie, a mix of different pork cuts cooked with sauerkraut pickled cabbage.

For one-way bike hire use our bespoke service.

Cicerone Press publishes a guide to The Rhine Cycle Route covering the whole route, including detailed descriptions of the French stages.

See also the official EuroVelo 15 website and cyclingeurope.org for more on the EuroVelo network.

Mike Wells is an author of walking and cycling guides, including the Cicerone guide to The Rhine Cycle Route. He has walked long-distance footpaths for 25 years, including sections of France's Grande Randonnée. He has been a keen cyclist for over 20 years, cycling long-distance routes such as Lon Las Cymru in Wales, the C2C route across northern England, the Camino and Ruta de la Plata to Santiago de la Compostela, and a circumnavigation of Iceland.