7 D-Day Museums for Cycling in Normandy

Here are 7 fascinating museums and sites that help tell the story of the D-Day Landings.

Here are 7 thought-provoking stops for any Normandy/D-Day cycling itinerary. 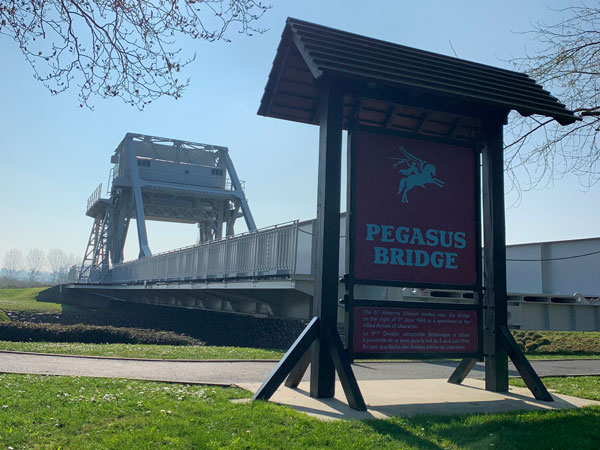 Situated just south-east of the D-Day Landing Beaches on the Caen Canal, the Pegasus Memorial Museum focuses on the missions carried out by 6th Airborne Division on the night of June 5, 1944. These soldiers were the first to set foot in Normandy during Operation Overlord. Their missions included the capture of Bénouville Bridge, now more commonly known as Pegasus Bridge, as well as the nearby Ranville Bridge and the Merville battery 8.5km away. Although the bridge has since been replaced, the original Pegasus Bridge is now displayed in the grounds of the Pegasus Memorial Museum and, alongside a life-size reproduction of a Horsa Glider, is well worth a visit. 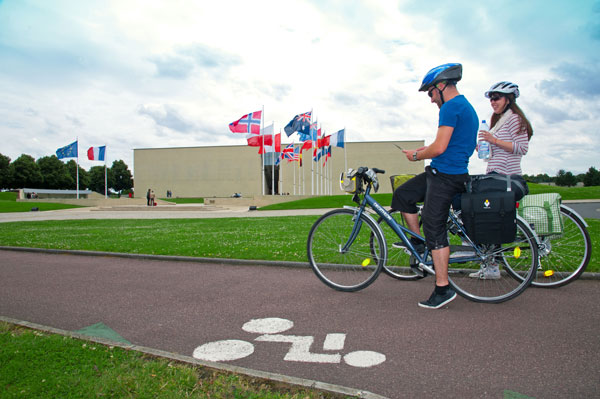 Caen, bombed during the summer of 1944 and a martyred city of the Liberation, deserved a memorial on a scale befitting its suffering. The result, the Caen Memorial Museum, is dedicated to peace and is considered the best museum in France for 20th-century history. Start by learning about the history behind the Second World War before moving on to the D-Day exhibition and the poignant 19-minute film The Battle of Normandy: 100 days which changed the world. Exhibitions combine classic and interactive displays, films and a fully comprehensive audio-tour available for an additional fee. There is also a Cold War exhibit for those looking to learn beyond D-Day, as well as regular temporary exhibitions. 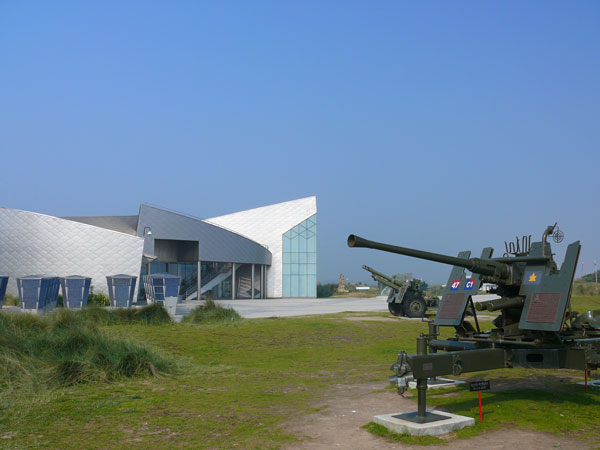 Built on the beach where the Canadians landed in June 1944 at the side of the other Allied forces, the Juno Beach Centre details of the role Canada played during the Second World War, particularly in Normandy. After a short introductory film, you can find out about Canada’s crucial role in D-Day, passing through five different zones displaying written documents, photos, audio-visual and sound records, multimedia, maps and other artefacts, as well as the moving 12-minute film They Walk With You, which will give you an idea of what the Canadians experienced on D-Day and during the Battle of Normandy. The Juno Beach Centre has always focused on making its exhibitions accessible to children and, as of 2019, you can use a new interactive app when visiting the museum, making it even more geared to younger visitors. 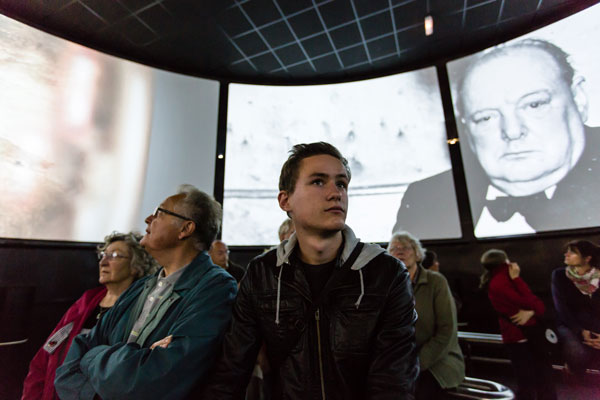 Situated on the hill above the seaside town of Arromanches, the Arromanches 360 circular cinema looks over the remains of the artificial Mulberry port built in 1944 by the Allies. The cinema screens The 100 Days of Normandy, a 20-minute film that plunges spectators into the heart of D-Day and the Battle of Normandy. Projected on nine screens, the film is made up of previously unreleased archive pictures which retraces 100 days of terrible fighting, and is a tribute to combatants from all nations and the 20,000 civilians who died during the conflict. 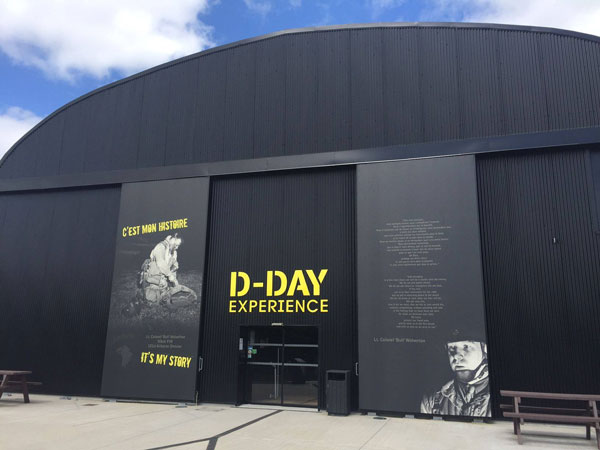 According to General Eisenhower, the area around Saint-Côme-du-Mont and Carentan was the most crucial for the success of the Normandy invasion. The paratroopers of the 101st US Airborne Division – the famous ‘Screaming Eagles’ – were among the first Allied troops to land in Normandy on June 6, 1944. One of their objectives was securing the town of Saint-Côme-du-Mont, a vital junction between Utah Beach and Omaha Beach. Visit the D-Day Experience, take a realistic flight simulation in a real C-47 that took part in D-Day and, from June 2019, watch the film D-Day: Normandy 1944 at Normandy’s very first IMAX 3D cinema. Note that the flight simulation not appropriate for under 13s. 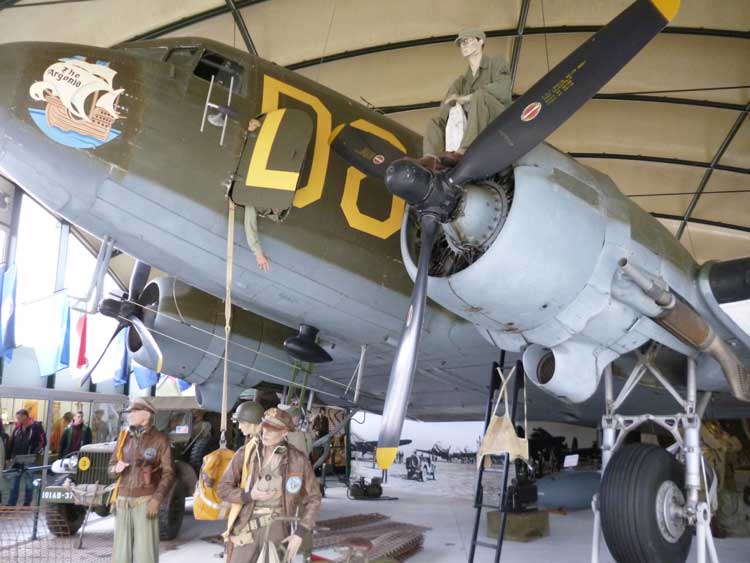 The Airborne Museum lets you experience the invasion alongside the American paratroopers of the 82nd and 101st Airborne Divisions with spectacularly realistic displays, an amazing collection of historical objects, including a real glider and C-47, both of which took part in the D-Day operations. Experience the parachute drops of June 6, 1944 by boarding a night flight, dropping into Sainte-Mère-Eglise in the midst of the fighting and taking part in the operations that followed. Children and adults alike will also enjoy 360° immersion in what happened in Sainte-Mere-Eglise under the Occupation and on D-Day, thanks to the new HistoPad tablet. 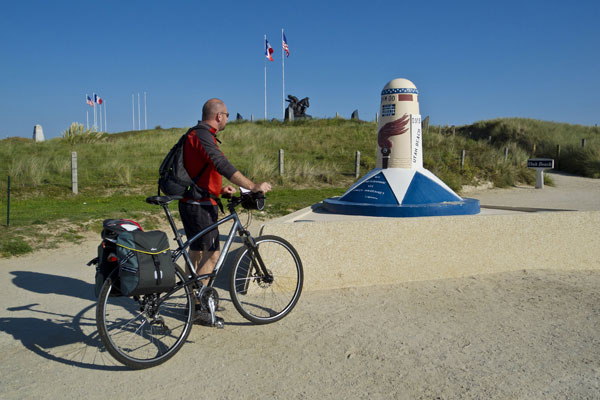 Built on the very spot where American troops landed on June 6, 1944, the Utah Beach D-Day Museum recounts the events of D-Day, from its planning right through to its success. Highlights of the museum include an authentic American Marauder B26 bomber displayed in a specially designed hangar, and the milestone in front of the museum which marks the beginning of the Liberty Route between Normandy and Belgium. Watch the film Victory Beach and relive the epic effort of the American soldiers in this decisive battle, which was the biggest amphibious operation in military history. Hearing the moving accounts of the veterans, you get a real idea of the dangers they faced and their sacrifice. There are also poignant quotes from local residents wose lives were forever affected by war.

For up-to-date information about D-Day and the Battle of Normandy, visit normandydday75.com

Search here for accommodation for cycling in Normandy.

See this page for guided and self-guided rides that take in the Normandy peninsula and the D-Day Beaches.

More on cycling in this area