Disappearing into the forest along the Boucle du Lion. The 18km circuit just south of Lacanac Beach includes a 4.5km stretch of La Vélodyssée, the Atlantic Coast EuroVelo 1 route.

The Medoc Ocean coast between Lacanau and Hourtin is an ideal place for a cycling holiday in France. By Lynette Eyb.

The Atlantic Coast of France, with its flat forest land and paved, developed beach resorts, lends itself to cycling, a fact not lost on the European Cyclists' Federation, which devised EuroVelo 1 to run the entire length of the west coast of France.

The resulting La Vélodyssée route passes beachside towns and zips through forests as it makes its way south through the department of Gironde in the Aquitaine region.

The coast joining Lacanau Ocean to Hourtin via Carcans and Maubuisson is now marketed as the Medoc Ocean, its laid-back holiday feel giving way in spring to heaving summers of tourists, tans and surf tournaments. Yet even at the heights of a sunburnt French summer, it's an ideal place for a bike ride because its tall pine forests provide relief from the sun and its dedicated cycle paths give cyclists the mobility that its traffic-jammed roads can't afford. After lunch on any given day in August, I'd hedge a bet that the Bordeaux-Lacanau bike path, an old railway line salvaged for cyclists, is moving at a faster pace than the D6 main road that runs nearby for much of the journey. 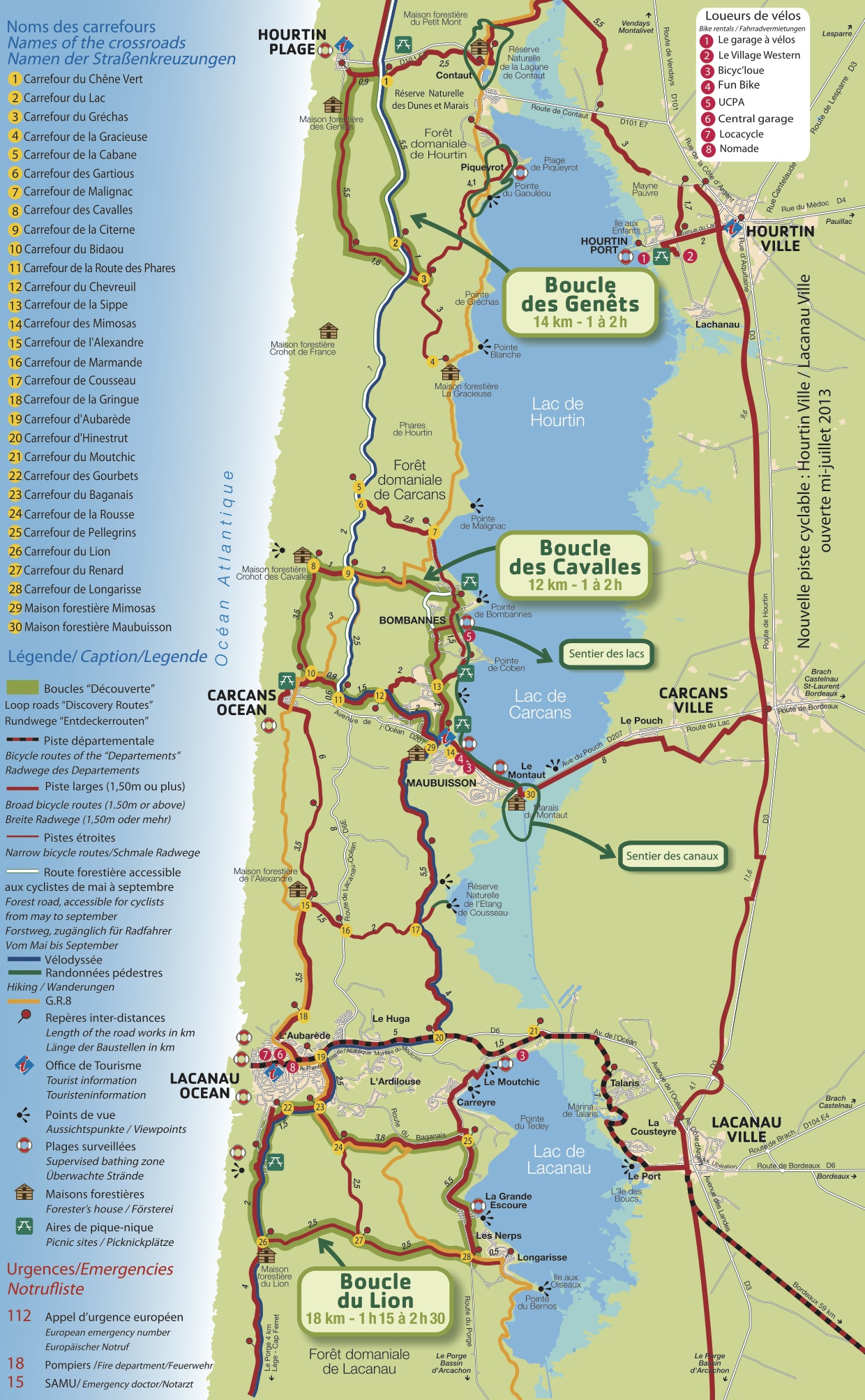 This stretch of Atlantic Coast between Hourtin Plage and Lacanau Ocean is blessed with not just long, sandy beaches and peaceful forests escapes, but also lakes. Three lakes, each named after its town, Lac du Hourtin, Lac de Carcans and Lac de Lacanau, provide inland detours for cyclists devising routes around this part of the world.

Between lake, forest and sea, there are enough cycle paths – mostly either purpose built or converted forest roads – to guarantee you will more often than not have space in front of you free of someone else's tracks. There are 150km of bike paths in this area, covering some 3000 square kilometres of forestry land. And that's not counting the open and paved beach fronts, complete with easy access ramps and allocated parking, nor the smaller local roads that weave around the back streets of each village.

The cycling is mostly flat, making it ideal for families and daytrippers, but the interconnected nature of the trails means that it's easy for more experienced riders to devise longer rides as well.

Shorter day rides: Each of the main towns has a central circuit (see map). Lacanau has the 18km Boucle du Lion, Carcans has its 12km Boucle des Cavalles, and Hourtin has the Boucle des Genêts (14km). Each is linked to the other via a series of dedicated tracks. La Vélodyssée, in a kind of showboating fashion, makes an appearance on all three, cutting through the heart of the Cavalles and the Genêts, and imposing itself on the Lion for a 3.5km leg.

You can read my report on cycling the Boucle du Lion here.

Nearly all routes are well-signposted, making it hard to get lost (though the map on this page is widely available locally just in case).

Longer rides: For more experienced riders and touring cyclists, there are longer options that link to towns and villages inland, and up and down the coast.

For cyclists looking for longer routes, there is of course La Vélodyssée, which will eventually take you to the ferry ports of Brittany or to the Spanish border. Southwards, it goes via Le Porge, a less developed beach resort that's without the creature comforts of Lacanau, and on towards the beautiful Cap Ferret and the Bay of Arcachon. With heavy car traffic around here in summer, a bike is by far the easiest and least frustrating way to explore this part of Aqutaine.

Inland, the Lacanau-Bordeaux bike path will take you to the heart of France's old wine region in around 60km. The path is peaceful and largely unadventurous as it makes its way through the pine forests.

From Hourtin it's possible to follow the Route du Medoc (starting on the D4, it becomes the D205) to Pauillac and the northern half of the Medoc vines. This road does get busy in peak season, but there are opportunities for detours along smaller roads past seemingly hidden chateaux.

Getting to the Atlantic Coast of Gironde

There is no train service to this stretch of the Atlantic Coast for anyone not arriving by pedal power or car. There is, however, a semi regular bus service that goes from Bordeaux's main train station to Lacanau. There is a train serving the Bordeaux-Arcachon line, too. It's a 70-odd kilometre ride around the Bay of Arcachon to Lacanau via Cap Ferret. Don't forget to take in the remarkable Dune du Pilat en route. (Go very early or late to avoid the crowds that flock to Europe's largest sand dune.)

We stayed in an apartment at the Pierre & Vacances self-catering village, a tastefully designed resort comprised of individually designed chocolate box houses and apartments sleeping up to 8 people.

For other accommodation options in the area, search this list of hotels, B&Bs and apartments that are cycle-friendly (we are adding more every week), or see our advice here on finding accommodation for cycling holidays in France. The tourist board website also has accommodation options, including campsites. Wherever you stay, you MUST book well ahead in summer, when it is near impossible to find a camping pitch or an affordable hotel at short notice. Weekends in April-May and Septmeber-October are ideal as it's less busy and more affordable.

Many hotels and apartments around here have bikes for guest use (Pierre & Vacances had an entire shiny fleet of bikes, numbering in their dozens), while each village and town has local hire services which are prominent and well advertised. See our bike hire listings to get started. If you get stuck, one of these bike delivery services may be able to bring your wheels to you. Most hire outlets will have sturdy hybrid bikes or mountain bikes suitable for local paths and forest roads, plus child seats, trailers and tag-alongs; finding a road bike will be much more difficult.