Cycling in the Vézère Valley of the Dordogne

The ancient sites and sweeping gorges of the Vézère Valley in the Dordogne are all within cycling distance of each other. By Lynette Eyb.

The Vézère river, with its gorges and caves, hides the ancient secrets of man – and of dinosaurs before him. The river valley – in the Dordogne department of Aquitaine – is dotted with archaeological sites of international importance, the most famous being Lascaux, near Montignac, where the original Paleolithic cave paintings have been protected from the debiliating effects of tourism (a replica cave is open to the public nearby). The entire valley is UNESCO World Heritage Listed (all its prehistoric sites – many of then open to the public – are listed here). 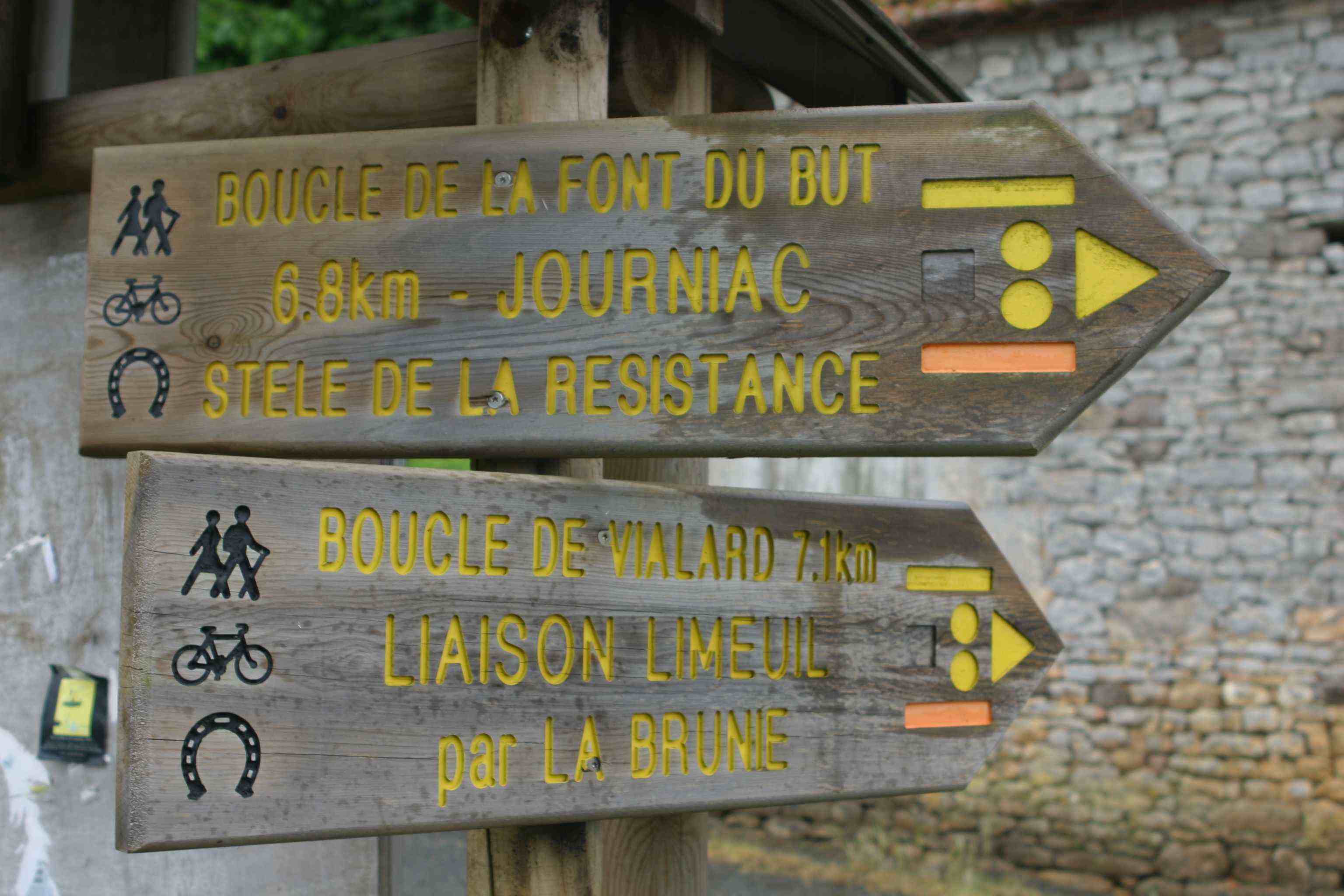 Official routes around our campsite near Saint-Avit-de-Vialard. Photo: Lynette Eyb

Where to cycle in the Vézère Valley

Everything between Lascaux and the busy town of Le Bugue is within cycling distance – just under 40km separate the two on the main road, the D706, though there are dozens of backroad routes that you can explore with the help of an IGN map. (The D706 can get busy, especially in summer.)

From Campagne, we followed the Route de la Saint-Cirq on the western side of the river, emerging on the north-west edge of Les Eyzies-de-Tayac-Sireuil (known locally as Les Eyzies) in time to check out the Musee National de Prehistoire, where our two-year-old future cyclist took pleasure in pointing at the big, hairy man with the spear and yelling "Papa".

While there are no official voies vertes (dedicated green routes for cycling) in this area, most tourist centres will have maps of local cycling routes. (We stayed near St Avit de Vialard, just outside Le Bugue, and picked up maps at the campsite for two local official routes starting from the Mairie – the 6.7km Boucle de la Font du But and the 7.1km Boucle de Vialard – plus a folder of additional routes scouted by the campsite staff.)

From Le Bugue it's under 7km to the town of Limeuil, where the Vézère meets the mighty Dordogne. We arrived in Limeuil (officially one of France's prettiest villages) just in time to see a bride and groom arrive by canoe. From here, there are various routes taking you towards the western edge of the Dordogne, and into the wine country of St-Emilion and Bordeaux, both over the departmental border in Gironde. From Mauzac, just west of Limeuil, it's possible to ride to Bergerac following the towpath along the Dordogne's canal lateral.

If you're heading further east into the Dordogne, it's just over 30km from Le Bugue to Sarlat, centre of the so-called honeypot area of the Dordogne, where beautiful villages are lined with cobbles and topped with chateaux over which much blood has been spilled.

If more fresh air is on your agenda, then there are numerous canoe and kayak hire centres up and down the valley that will drop you and your canoe off and pick you up at the other end – we spent a morning drifting down the valley towards Le Bugue from Tursac. There are numerous points of entry up and down the river, though the more spectacular gorges can be found north of Tursac and down.

History buffs are spoilt for choice with the Museum of Prehistory just one of the many attractions you can visit. For more ideas relating to museums, castles, grottes and troglodytes, caves and mammoths, see the tourist information website.

Along with the Loire and Brittany, the Dordogne is one of France's most popular regions for organised cycling holidays. Most of these are self-guided rides, with the terrain relatively gentle compared to many other regions of France. Self-guided holidays in the Dordogne usually include accommodation, detailed route notes and maps, and on-ground local support and advice. Self-guided rides offer you independence, with the safeguard of having local backup if you need it. Bike hire can also be arranged by most tour companies. You can search our organised tours section here.

Cycling accommodation in the Dordogne

We stayed at the St Avit Loisirs campsite, near the tiny village of St Avit de Vialard, just north of Le Bugue. We booked through Eurocamp and stayed in a 3-bedroom cabin (the forecast was bleak), although you can also visit the site independently.

Search the Aquitaine section of our Where to stay page, or zoom in on the icons on our map below for bike-friendly accommodation in the Dordogne. The official tourism website is very good and also lists accommodaiton options. For general information on accommodation options in France, see our accommodation overview.

Bike rental in the Vezère Valley

Many campsites (and some canoe hire outlets) offer bike hire. Ask ahead about the type and quality of bikes – our campsite had a selection of mountain bikes of varying quality which were fine for 5 or 10 mile rides.

Stanfords bookshop has an excellent range of Brittany books and maps, including hundreds of IGN maps.

La Dordogne à Vélo (in French) by Claude-Hélène Yvard Guermonprez (UK link, US link) is the most established guide to cycling in the area.

American cyclist Walter Judson Moore has a self-published guide to Dordogne’s Valleys and Villages (UK, US), which features detailed route information, maps and general cycling advice. Thomas Cook’s Driving Guide to the Dordogne and Western France may be of use to road cyclists.

See also this river, canoe and hiking map for the Dordogne – it has campsites marked, and would be especially useful if you were combining cycling and canoeing or walking during your trip.

DK Eyewitness has a general tourist guidebook to the Dordogne, Bordeaux and the south-west coast of France, while there is also a Rough Guide to the Dordogne and Lot (UK link, US link) and a Michelin Green Guide; Lonely Planet has a chapter that can be downloaded.