A Guide to Cycling in Burgundy

Cycle Burgundy's canals, and follow back roads and tracks through some of the world's greatest wine-producing estates. Richard Peace has this overview of cycling in Burgundy. 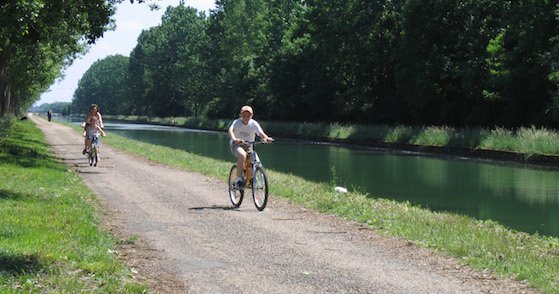 Fans of history, architecture and cooking will adore Burgundy. For much of its past, the Dukes of Burgundy remained more powerful and controlled more European territory than many kings. Today, it is still one of the wealthiest areas of France today. Many traces of this wealth remain, for example, in the incredible Ducal palace at Dijon or the lovely abbeys of Fontenay and Ancy, all within very easy striking distance of a bike trip along the Burgundy Canal. Perhaps most wonderful of all are magnificent multi-coloured roof tiles seen on the grander buildings throughout the region.

The area also has its own cooking description; à la bourguignonne means cooked in wine sauce using one of the area's rich reds. Snails, meanwhile, are a particular speciality, usually stewed in white Chablis wine with various vegetables and finally stuffed with garlic butter. 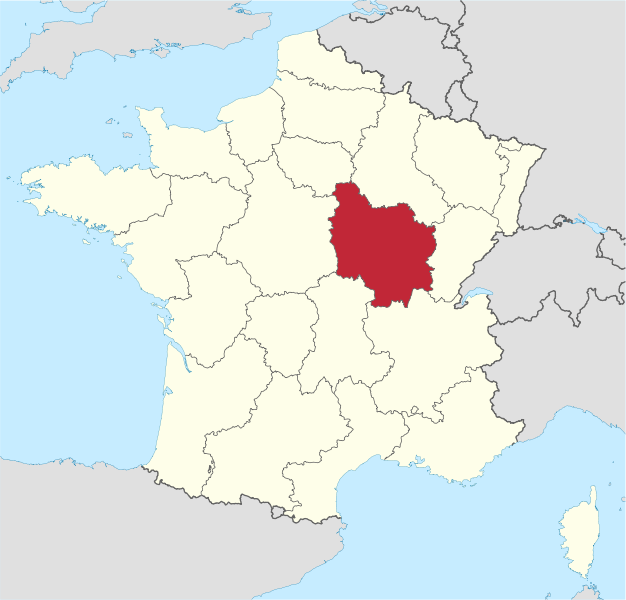 Dijon is one France's most beautiful, stylish and richest cities. Just behind the Ducal palace is a area rich is magnificent and ancient town houses and the magnificently gothic church of Notre-Dame. Many streets have been pedestrianised making the compact centre relaxing for cycling and walking across. Dijon also has the Velodi bike share system.

Auxerre is a sizeable and very pretty town in northern Burgundy and lies at the northern end of the lovely 175km Canal du Nivernais, now an official voie verte (greenway).

Tonnerre, also sizeable, is less ornate than nearby Auxerre but is also a useful base for exploring by bike as it's on the Burgundy Canal (not yet an official voie verte hereabouts but with a perfectly cycleable if somewhat gravelly towpath). It's also home to the wonderful washhouse and pool known as the Fosse Diane – see this circular day ride idea.

Semur-en-Auxois has to be one of Burgundy's most beautiful towns, a sublime blend of ancient buildings and a magnificent natural site above the lovely river Armancon. Other attractive Burgundian hilltop towns include Avallon and Vézelay.

In southern Burgundy, the town of Beaune's centrepiece is a graceful and unusual looking 15th century hospital. It is something of a hub for cyclists (and winelovers), and accommodation is plentiful here. Further south, the port town of Chalon-sur-Saône is worth more than a passing look.

Where to cycle in Burgundy 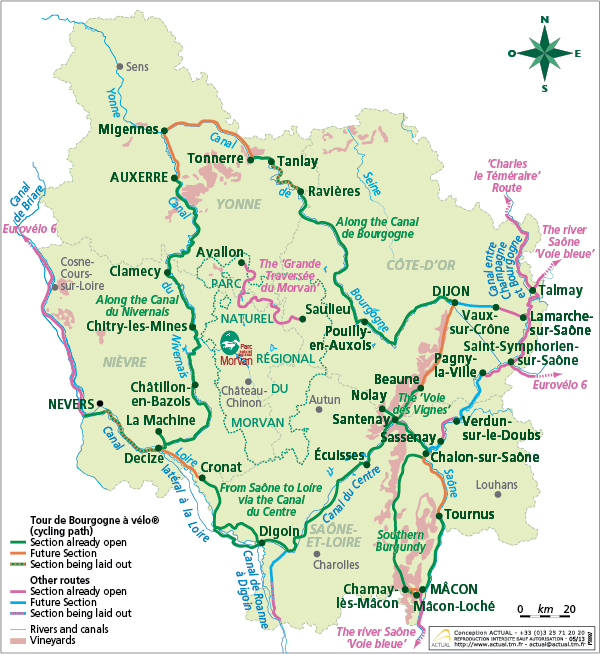 Burgundy's 'flagship' route has to be its eponymous canal, the 212km Canal de Bourgogne. The more scenic section is at the southern end, where the canal shares the valley bottom with the lovely river Ouche.

Northwest of the Ouche valley the canal rises to its highpoint, Pouilly-en-Auxois, so whichever direction you choose to do the route in it's all downhill from here. Just north-west of Pouilly-en-Auxois is the incredible 'vault'; in fact a 333m long tunnel which the route runs more or less along the top of, and from which you can peer down into the abyss via some of the 32 ventilation shafts.

If the southern dogleg of the canal seems like too much canal towpath you can easily take to the hills for a glorious shortcut via the picture-postcard hill town of Châteauneuf, above the forest of Bouhey.

Heading north-west along the canal there are a couple of great diversions to the west; Semur-en-Auxois is one of those French towns veritably dripping with history and beauty and is less than 10 miles from the canal, whilst Noyers-sur-Serein and Chablis lie west of the canal between Montbard and Tonerre. Noyers is a real gem of a village and Chablis is a must for all white wine lovers.

You can continue on the towpath north of Montbard, though this may or may not have been upgraded beyond its longstanding rather potholed and gravelly condition yet. Fontenay Abbey and Château Ancy-le-Franc are two architectural marvels that light up the section north of Montbard.

Western Burgundy houses the Nivernais Canal, through incredibly rich farmland, the canal dotted with attractive villages such as Mailly-le-Château, Châtel-Censoir, pretty little Lucy-sur-Yonne and Clamecy and is classed as a voie verte in its entirety, usually a guarantee of a good quality surface.

In between the two canals lies the more arduous terrain of the Morvan, known mainly for its tough mountain bike traverse, but also home to many virtually deserted minor roads that let you explore this mini-natureland of trees, rocky outcrops and occasional lakes. Saulieu and Autun are both good bases from which to explore the area by bike and the whole of the Morvan is chock full of campsites in summer making it idealfor a mini cycle camping tour.

South of Dijon and the Morvan more waterside riding is on offer, with roads and cycle tracks tracing the course of the Loire from Nevers to the popular pilgrim site of Paray-le-Monial from where you pick up the line (and latterly the towpath itself) of the 171km Canal du Centre to Chalon-sur-Saône. 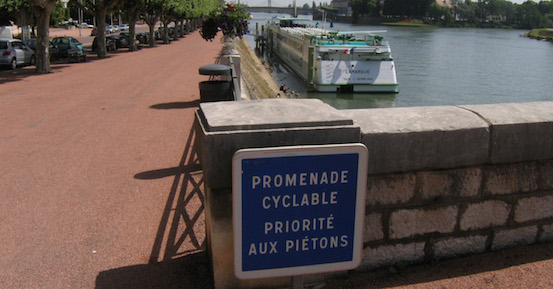 Not a tourist hotspot, but highly recommended, Chalon has a fine riverside cycle lane and a pleasant old town, as well as a small selection of interesting museums. It will also develop as a cycling route ‘hub’ for the area over the coming years, with Burgundy’s Vineyard Way and the Givry to Mâcon greenway passing through or close by. There are also plans to put a route along the river Saône itself.

Too much talk of towpath and easy going cycling? Then why not explore southern Burgundy on the Vineyard Way – the Voie des Vignes. Stretching 20km from Beaune to Santenay, it's a lovely ride on a mix of often very minor roads and tracks, sometimes tarmac, sometimes stone and gravel. The intention is to carry on extending the route at either end to connect Dijon and Digoin. The Vineyard Way is followed by a good towpath ride from Santenay along the Canal du Centre Greenway into Chalon-sur-Saône. 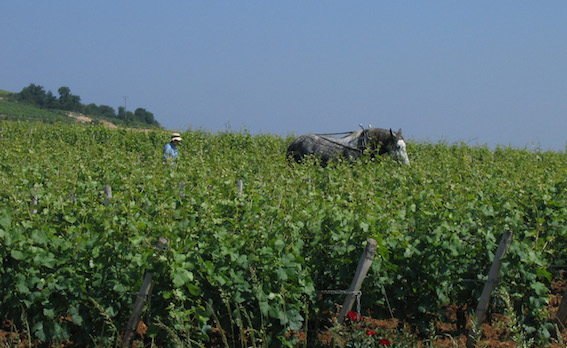 Also in the area, the 65km Chalon-Mâcon voie verte is a luxurious ride on an uninterrupted tarmacked traffic-free path from the Chalon to Charnay-lès-Mâcon. Various facilities along the way including drinking water. There’s a tunnel south of Cluny over a mile long which is quite cold (overhead alternative route available).

There is a grand scheme to link all the above voie verte / greenway style routes into a coherent whole as the Tour de Bourgogne à vélo, a grand 500 mile network covering much of Burgundy. Although there are one or two gaps still these are easily bridged by linking tracks and minor roads – see the suggested links in my guidebook Cycling Southern France (UK, US) – and the sections that are finished are often to an impressively high standard; for example the Canal du Centre towpath towards Chalon is more like a minor road than a towpath.

If you are cycling into Burgundy you have a choice of signed leisure routes. Coming from the west, you can follow Eurovelo 6 (also known as La Loire à Vélo for most of its western extent in France), which extends west to the Breton port of St Nazaire, the Loire's mouth, around 400 miles from the route's entry into Burgundy near Nevers. (See more on cycling the Loire river here).

Coming from Champagne country, there is the Champagne to Burgundy canal and from the east you could head west back along EuroVelo 6 which heads through eastern France to Basel.

If you want to arrive rather more quickly, Paris's Gare de Lyon is only around 1 hour 40 mins away by superfast TGV train – for information on travelling to Burgundy by train, see our French bikes and trains page. There are many direct flights to Lyon, just a stone's throw from Burgundy to the north. See our flights to France page here.

Bike hire and accommodation for cycling in Burgundy

See our Burgundy bike hire listings here, as well as this reader Q&A on electric bike hire in Burgundy. For bike-friendly accommodation options, search our Where to Stay section, or zoom into our map below (we are endeavouring to add more over the coming weeks). See also our info page on finding affordable accommodation in France.

Burgundy is one of the most popular regions to feature on self-guided cycling itineraries. You can search our organised tours section for a selection of cycling holidays to suit all budgets. Self-guided tours usually include baggage transfer, accommodation, detailed route notes and optional bike hire. See our article on choosing the right tour option for your cycling holiday in France.

More information on cycling in Burgundy

The official Burgundy tourism site, Burgundy by Bike, is a great source of informtion and further ideas, and includes downloadable GPS route maps.

French publisher Chamina has two excellent guides to cycling in Burgundy. Both are in French, but the maps are clear and easy to follow. See Le Tour de Bourgogne à vélo and Eurovélo 6 - De Bâle à Nevers; Michelin also have the Canal du Nivernais à vélo. North Burgundy (Burgundy & Nivernais Canals) are both covered off in Richard Peace's Cycling Northern France (UK, US).

Burgundy map thanks to TUBS/Wikipedia