Andrew packed a rucksack and headed off to tackle his first 'proper' col, the Hourquette in the Pyrenees. Here's his report.

The Hourquette on a clear day. Ths photo by Pretre is taken about half way up from Payolle.

See also our introduction to cycling in the Pyrenees.

Autumn has always been my favourite time of year, especially for cycling since moving to the rural south-west of France. With the vines gently turning russet and the temperatures varying from an invigorating morning chill to mild blue-skied afternoons, it beats the heat and humidity of summer – as long as you can keep your nerve with the gunshots of hunting season ringing out (tip: don't wear antlers on your helmet).

A few weeks ago I decided I was ready to see if I could manage a climb or two in the Pyrenees, a life-long ambition since watching the Tour de France as a kid on Channel 4. I am now in my mid-forties and ride two or three times a week. I usually ride on rolling terrain with the odd short climb of 3-5%, so I was intrigued to see how I'd go in the high Pyrenees. Here's how I got on.

I landed on my feet with this TGV from Bordeaux to Tarbes. My small second-class compartment had space for two bikes. It was attached to the end of first class and was totally deserted: carriage 11, seat 25. (A reservation is needed for your bike) 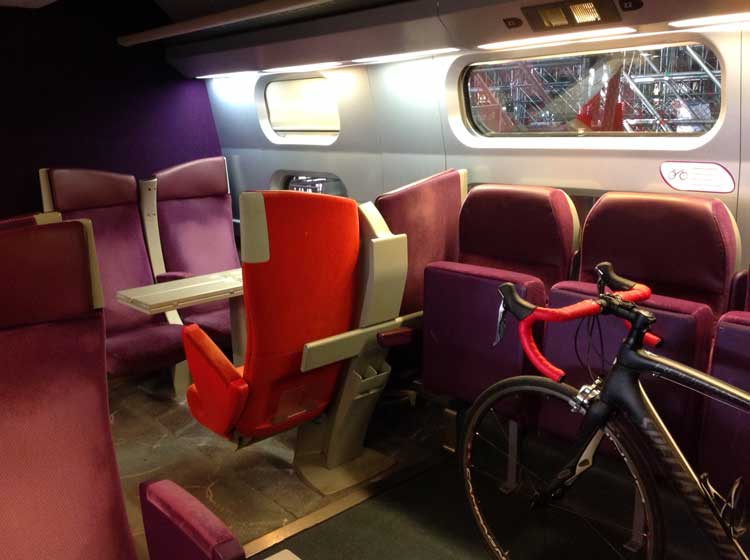 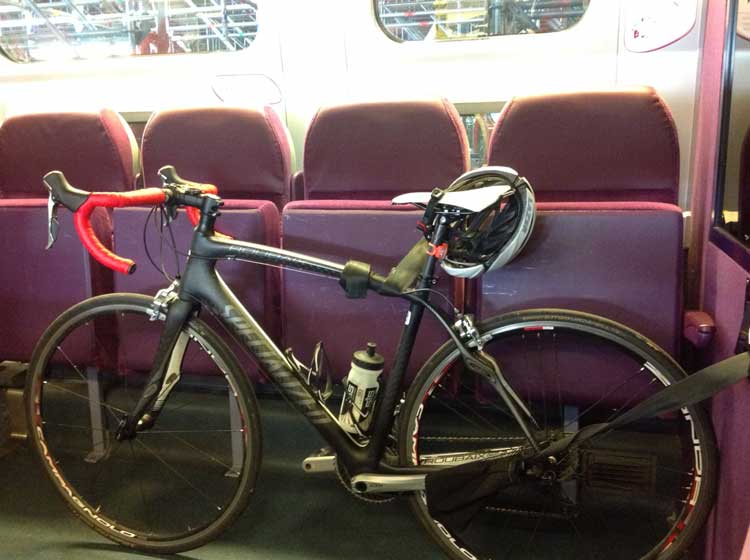 Bikes travel in style on TGVs. There's space for two bikes, with a seat belt to wrap around the bikes to stop them falling or moving about.

I decided to base myself in Bagnères-de-Bigorre for three days, and my target was to climb the Col d'Aspin and perhaps the Hourquette d'Ancizan, with an eye on the Col du Tourmalet for spring next year if I go OK – I think it is too much for me now (I like beer too much). 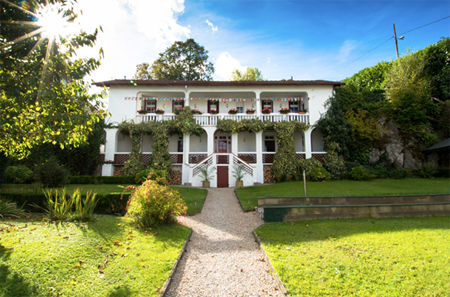 Bagnères-de-Bigorre is 25km from Tarbes, so from the train I cycled with my rucksack to the Les Dix Arches chambres d’hôtes (right) run by Caroline and Andy (they're big fans of Freewheeling France, so I was sure they'd be nice people!)

The ride from Tarbes was quite hard actually, mainly because I put all my stuff into a standard rucksack, meaning the 23km of very gradual climbing along the D8 was quite slow going, coupled with the mountain vista directly in front of me and added up to a general feeling of 'what am I getting myself into here?'

But that was soon forgotten after a warm welcome and a cup of tea upon arrival. The chat with Andy, a font of knowledge on cycling in the the Pyrénées, was invaluable and he recommended I tackle the Hourquette rather than the Aspin, saying that they could in any case be easily combined if I felt OK.

With the sun setting and my bike secured in Andy's great bike storage area, I nipped out for a walk around town and was pleasantly surprised. 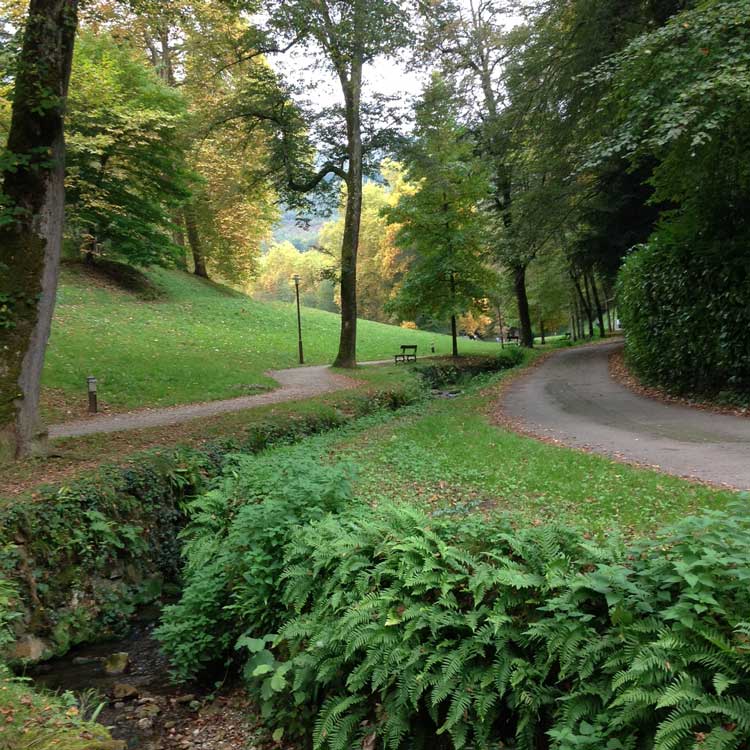 I went for a lovely park walk and stocked up on supplies of post-ride snacks from one of the many local shops before grabbing a Leffe in one of plentiful local bars and restaurants.

I joined Andy and Caroline for a lovely meal in the evening, which really set me up for the efforts to come, and retired with everything ready for my climb the following day (although I must admit to some nerves).

After a good sleep and a super breakfast, I peered towards the horizon from my bedroom window and was greeted by a cool morning with that kind of light rain and low cloud you only get at higher altitudes. That was fine for me: I didn't expect to be doing much sight-seeing and could try the new Castelli jacket I'd bought especially for the occasion.

I got the bike out, loaded my pockets and bidons, and went for it!

I set off at 10ish and took the D935 road to Saint Marie De Campan, which is 11km from Bagnères-de-Bigorre. This marks the start point for both the Col d'Aspin and the Col du Tourmalet and I made sure I took the right direction.

At St Marie de Campan, though, I was already a bit worried, the road climbs steadily all the way from Bagnères, although only at a gradual 2 or 3%, yet my heart rate was already quite high despite riding steadily to conserve energy; I just tried to relax as best I could. 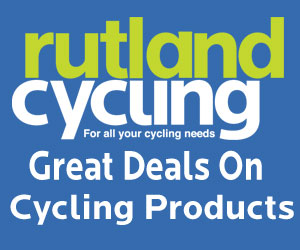 To access the Hourquette, you climb part of the Aspin and turn off at Payolle. The road is marked by dedicated signs that provide guidance every kilometre – be warned: they can be either be a real morale booster or you'll come ot hate them!

The first sign at the bottom of Aspin showed 13km to go – crikey, I thought. I knew I had to find a rhythm or this ride just wasn't going to happen. But it was much more difficult than I imagined to settle. Eventually, though, the kilometres ticked by, although my heart rate was still high and I had to work harder than I ever expected.

Finally, the hamlet of Payolle came into view. I turned off the Aspin road to be welcomed by a slacking off in the gradient. I sighed with relief and felt more positive. I took in my surrounds: mountain pastures, beautiful trees and streams were everywhere, albeit shrouded in cloud.

Nearby was the Lac de Payolle (see stage 7 of the 2016 Tour de France) but I could see no more than 50m and with the surrounding forest it was becoming a little eerie.

Then the low point: I see the first Hourquette sign and it says 8.8km – I didn't expect it to be that far and my morale drops. At 6km to go I felt that I could climb no longer: my legs were really tired, my breathing laboured and the sweat – even though it was cold – was dripping from my helmet.

I turned around and descended 50m before stopping, turning back around and climbing again. Just one more kilometre, I tell  myself. The next 2km were hard for me, the hardest thing I have done on a bike. The thing about these climbs is the length if them if you're not used to them. It's hard to train and prepare for the distance physically, but it's also the mental aspect that needs preparation.

I kept spinning my 34x32 gear and eventually I wa under 4km to go. I knew that if I could get to 3km, I could probably make it. To help, there is a false summit, so I recovered slightly before the final 2km.

Within 1.5km to go, I started to inwardly smile – I knew then that I was going to make it, even though I also knew the final kilometre was around 8%.

And I DID make it. I saw the sign with the font and the black background I know so well from other people's photos and I finally got to pose in front of one myself. It was windy, cold and lonely, but a wonderful feeling. After a quick snap, I turned around and started the descent. I was on cloud 9, but first I had to get back up that false summit .... ahhhhhh! 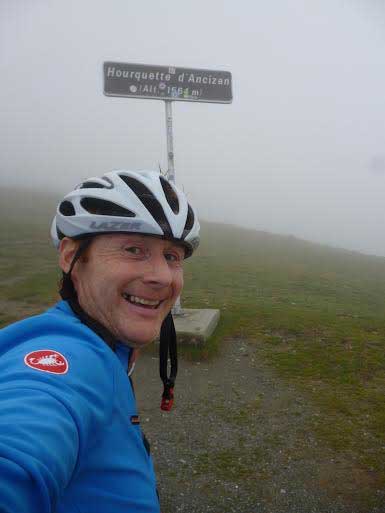 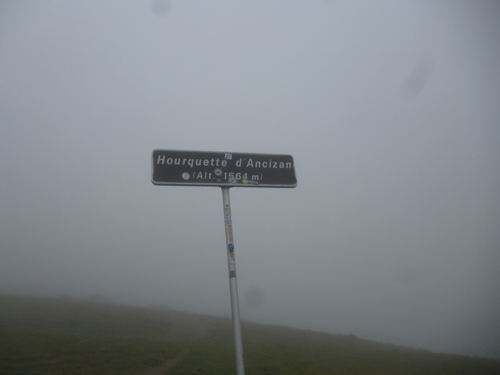 It was a bit grim at the top, and I didn't see a single other cyclist on the way up. If you are after a bit of solitude, then October is the time to go.

At the top of the col, my Garmin showed I had ridden 29km uphill, and the 29km back down were just wonderful. There were lots of animals roaming around the pastures, but this was lunchtime and I had the roads to myself. As I passed the Tourmalet turn-off, I found a new respect for anybody who had ridden up it or any other major col.

In total the ride was approx 60km, it took me 2hr 45min going up, and around 45 minutes to come back down.

That night I had beer and pizza!

Even though I ate well after the Horquette ride, my were really tired and sore in the morning, so I was happy when Andy suggested a steadier ride in the local valley.

We did a loop via Lourdes coming back via Angles, which I loved (in red below; the Hourquette ride is in blue). The colours of the hills and mountains were lovely and the climbs nice (especially knowing they were comparatively short). This would be a great ride for anyone wanting a recovery day. It's also a challenge in its own right for less experienced riders who are looking for a ride away from the cols.

Although I was suffering, it rounded off a great couple of days (seeing a Red Kite was special, too).

During my first evening I has seen a spa called Aquensis, so I decided to spend an hour there. It was a super facility with loads of pools and jacuzzis, an I would definitely recommend it for anyone with tired muscles.

My stay was rounded off by joining Caroline, Andy and a couple of French guests for a tables d’hôtes dinner that the guys hold on certain evenings. It was a great laugh, great food and I went to bed armed with some more French vocab (albeit ones not entirely suitable for the kids).

The trip back home was fine. Andy offered to run me back to the station at Tarbes in his van and I jumped at the chance. The train was busier this time. When I arrived home, it was time to empty the dishwasher.

Get the lowest gearing you can, lose as much weight as you can, try and prepare mentally for climbing uphill for a long time and go as slowly as you need to to get to the top. See also this page for general info about cycling in the Pyrenees.

Accommodation for cycling the Hourquette

I stayed with Andy and Caroline at  Les Dix Arches chambres d’hôtes in Bagnères-de-Bigorre, which is a good base for the Hourquette as well as for the Aspin, the Tourmalet and a bunch of other cols in the area. As I was travelling with only a rucksack, I wanted to be in the centre of town. For othe options (or for when Andy and Caroline ar booked out), browse the ma below or see the Pyreness Where to stay page – there are lots of B&B and self-catering options there for anyone cycling in this part of France.

Bike hire in the Pyrenees

Nearly all the B&Bs and gite owners listed above can help arraneg biek hire locally. You can also see here.

Taking your bike on French trains

There is lots of info here.

We have lots of great contacts if you prefer to take an organised cycling holiday in the Pyrenees. We also have suggestions for cycling holidays in the Alps.