Hilde Morris recounts her 52km bike ride from Fécamp to Le Havre along the Véloroute du Littoral de la Côte d'Albâtre. She has this overview for anyone planning on riding this bike route in Normandy. 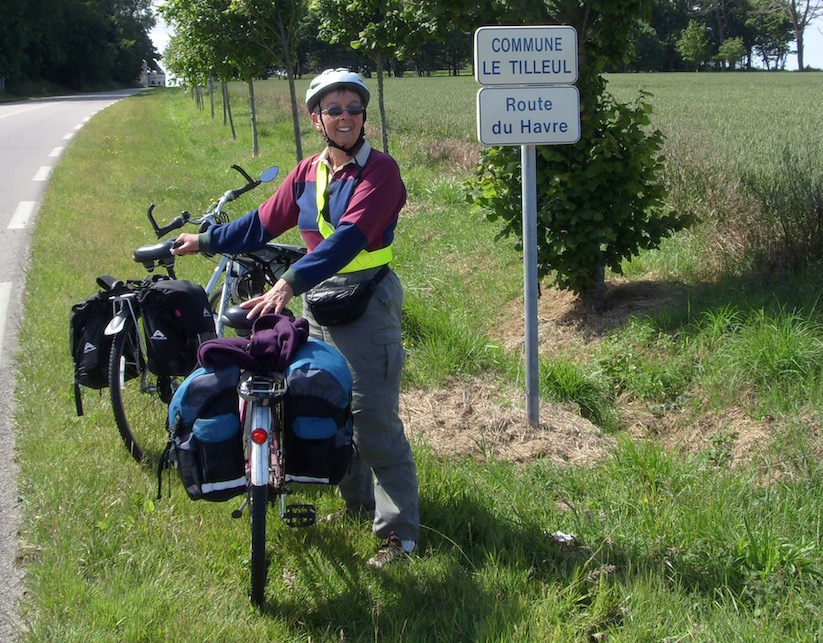 This is the story of our first 'serious' self-planned/self-guided 'velo-jaunt'. Previously my partner Heather and I had cycled around the Cherbourg peninsula, but is was very ad hoc – no planning and nearly no bed for the night. We'd also cycled from Niort to La Rochelle with an organisation, Belle France, provided bikes and carried luggage, which was great. However as we lived so close to the UK's Channel ports, we figured it was time we organised a trip ourselves – plus it would be fun planning everything ourselves.

We chose Véloroute du Littoral de la Côte d'Albâtre (sometimes also called La Véloroute du Littoral en Seine-Maritime) and Le Havre as our start/end point because we love coastal walking/cycling and I fancied visiting Fecamp and Etretat, names I recognised from history/art lessons and from my reading. I found an excellent Voies Vertes website and got help from the local tourist boards.

The Véloroute du Littoral de la Côte d'Albâtre is shared in some places with motor vehicles and, as at the time we were unable to find much information about it, we decided on just one day's cycling, taking the train one way, to Fecamp, and cycling back. This made sense as we knew that there is a steep hill going down into the port.

Because the véloroute is not a voie verte (ie not a greenway route developed specifically for bikes), it does have some sections shared with motorised traffic, and the terrain is more varied, more interesting, and of course, more challenging. 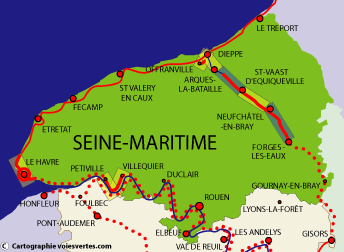 As luck would have it, it seems we chose to do the easiest bit, Fecamp-Le Havre. We have talked about doing a longer stretch of 112km from Le Havre to Dieppe, coming in on one ferry to France and out on the other. However, the stretch from Dieppe to Fecamp is very hilly and should apparently only be tackled by mature, experienced riders (which lets me out on both counts!).

The full Véloroute du Littoral de la Côte d'Albâtre route goes on to the Le Tréport, taking the total distance from Le Havre to 172km – you can read our overview here.

The route follows the coast (see the map from voiesvertes.com). The AFV3 website also more in French.

Hitting the road in Normandy

Setting off mid-week on the night-ferry, we had not anticipated any trouble finding the train station in Le Havre. However we were totally unprepared for the fact that almost the entire road network of the town was being dug-up to lay tram tracks. The noise of drills and bulldozers was diabolical and we were forced to push our bikes along crowded pavements.

Finally, we reached the station in time to catch our train and 40 minutes later we arrived early afternoon in Fecamp. We parked our bikes and climbed the hill above the town to eat our sandwiches before wandering down to the sea to find the beginning of the veloroute.

After a couple of false starts we were on our way through narrow leafy lanes. The little seaside town of Yport, about 8km from Fecamp, was our destination, where we had booked a room for the night at the Hotel Normand. Having spent time on the beach and wandering around the little village, we ate a delicious supper at the hotel and made an early start the next morning.

The actual distance from Yport to Le Havre is only about 48km, but the route follows the coast quite closely and there are steep slopes in and out of the valleys for the 12km to Etretat, where we stopped for coffee. Our luck was in as it was market day! 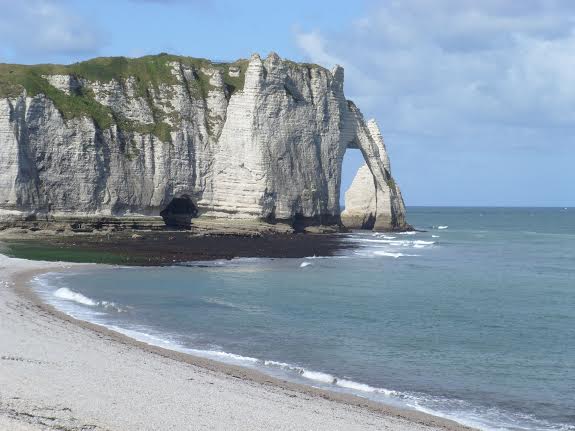 Cliffs on the route near Etretat. Photo: Hilde Morris

Etretat is a lovely busy town, well worth a visit, with a beautiful beach made famous by Impressionist painters Monet and Courbet. The steep hill out of the town was tough going, but from then on, all the way to Le Havre the route was a delight.

We cycled gently along broad tracks that crossed farmland, down narrow 'routes partagees', and along wide footpaths between the sea and the main road, the meadows full of flowers.

At one point we joined the main coast road, with some trepidation it has to be said, but French drivers are very respectful and give cyclists a wide berth – we felt perfectly safe. 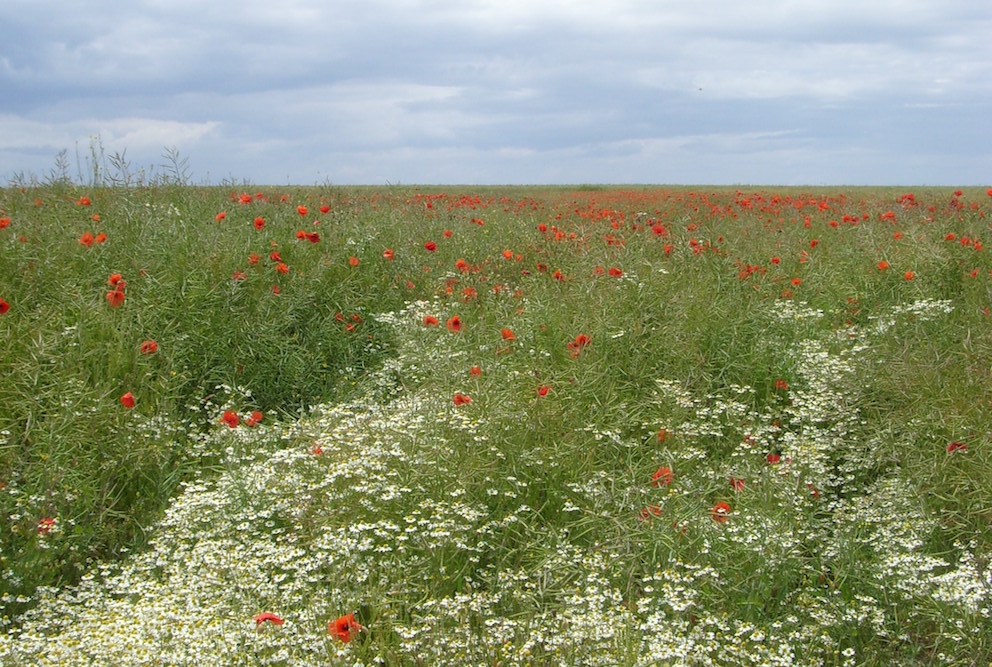 Poppies flutter in the breeze near the aerodrome on the approach into Le Havre in Normandy. Photo: Hilde Morris

The end of the road

After circling the small aerodrome, we dropped down, arriving at the end of the promenade, in time to have a long cool beer before finding our hotel.

That evening we had an idyllic walk along by the sea front before eating supper in a tiny little restaurant tucked away in the old part of town. It's not just the cycling we go to France for!

Hilde Morris and her partner, Heather Godrey, are two sixtysomething cyclists who live in England. They are always planning their next French cycling holiday.

It links Le Tréport and Le Havre, via Dieppe, Saint-Valéry-en-Caux and Fécamp in the Seine-Maritime region.

See Normandy Tourism's downloadable brochure of the entire route (also available from the Seine-Maritime site, or by emailing tourisme@cdt76.fr).