Harriet Bristow swapped her busy London life for Corsica. She chats to Freewheeling France about the joys of cycling in Corsica. Harriet swapped London for the open roads of Corsica.

When's the best time of year to cycle in Corsica?

Late spring and early autumn – the weather is usually warm and the roads are generally quiet. It's possible to cycle in July and August – and many people do – but it can be extremely hot, plus there are a lot of cars on the roads because lots of French tourists come to Corsica for their summer holidays. Late autumn and early spring can be nice, but the weather is more temperamental and many hotels are closed.

Are the roads and routes cyclist-friendly?

Generally, yes, in the sense that the routes which are nice for cycling are fairly quiet: there are no specific cycle routes, although there is talk of cycle paths being created around the principal towns, such as Bastia. It's better to avoid the main roads – there aren't many of them – and stick to the minor roads. Most roads have good tarmac, although a few of the very minor routes are in poor condition in parts, but still cycleable. You might also encounter pigs, goats and other animals on the road in the mountains, so some care is required! Corsican driving can be a little crazy at times, but they are fairly respectful of cyclists.

What types of cyclists does Corsica attract?

Corsica attracts road and leisure cyclists and, to a lesser extent, mountain bikers. The average stay for a cycling holiday on Corsica is between one and two weeks. In general people will cover either the North or the South of the island in that time.

Much of the island is designated as protected area – does this mean restrictions for cyclists?

Nearly two-thirds of the island is covered by natural parks. There are no restrictions on cycling, but free or wild camping isn't allowed in order to prevent accidental fires. There are also some general rules that people should abide by, such as not dropping litter and not picking wild flowers.

The terrain is varied – and mountainous. How much climbing is involved in a road-based cycling holiday?

Corsica is often described as 'the mountain in the sea', so pretty much wherever you cycle you can be guaranteed that it will involve some climbing. It's best to be guided by the relief rather than the distance in kilometres between places. You do have to expect some pretty tough climbs, but these are rewarded with downhill runs. If you're keen to avoid climbs, then you could stick to the coast, which is more undulating.

Corsica suits those who are fanatical about road riding and want to challenge themselves, but it's also suitable for leisure cyclists who want to take their time exploring the island's culture and heritage. You just need to plan well to ensure you find a route that suits you, or discuss your needs with a tour operator who will find you a holiday to fit your level of cycling. A general level of fitness is definitely recommended. 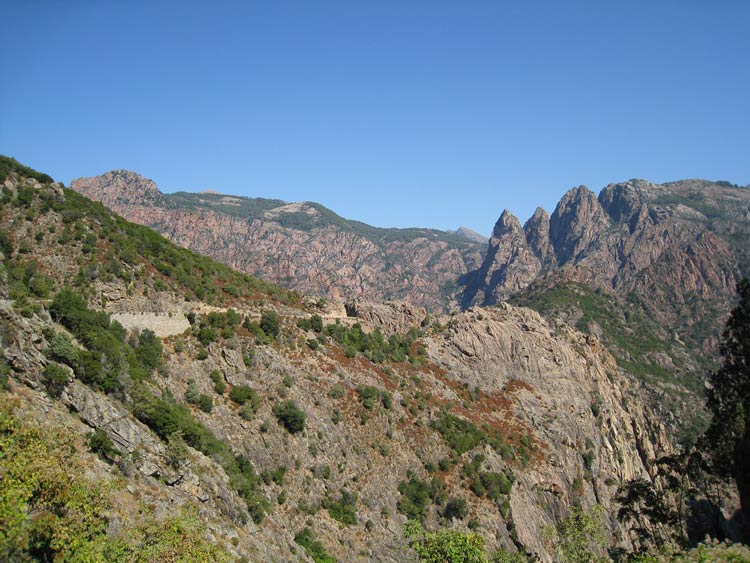 The mountains of Corsica offer some challenging climbs.

Can you recommend a route that best showcases the mountain scenery?

One of my favourite stages on a trip taking in the highlights of the North of the island starts in Porto, a super little village on the West coast with a back drop of red cliffs which plunge into the sea. From here you begin a beautiful climb up through the Spelunca gorge, into the Aitone-forest and up to the highest road pass of the island, the Col de Vergio. It's then a long and winding descent through the forest before you reach the ancient capital of the island, Corte. I'll never forget the first time I rode this route – it really is fantastic!

You mentioned the coastal roads – can you recommend a route for cyclists wanting to take in the views?

The Cape of Corsica in the North is one of my favourite routes. You can cycle along the east coast, over the top of the Cape and then down the west coast. The views are stunning. 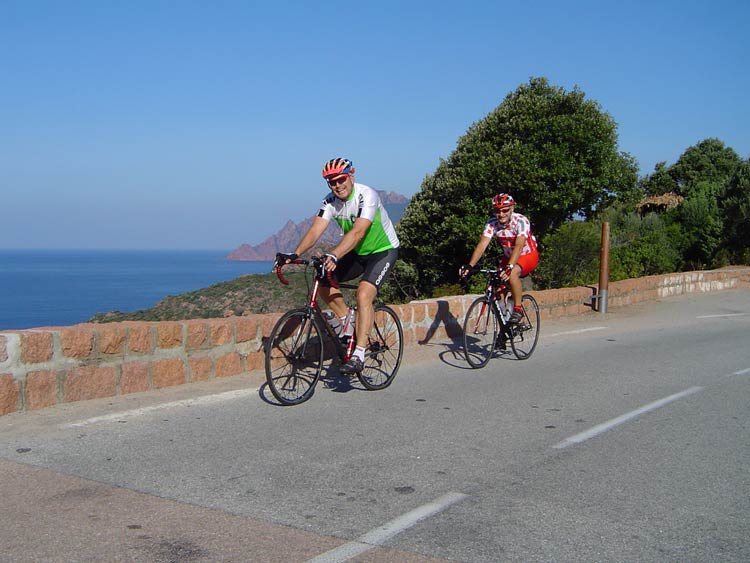 Taking in the scenery on the coastal road.

Aside from the scenery, what are some other highlights?

Bastia is a wonderful old town well worth a visit. Corte, the ancient capital in the centre of the island, is also popular, along with the sleepy port of St Florent. Then there's Calvi, with its ancient citadel, and Ile Rousse on the west coast. In the South, there's Ajaccio, the sophisticated capital of 'Corse de Sud', and Porto Vecchio, which is great for those who love to recline on the beach. There's also Bonifacio, which is an old town balanced on the cliffs facing Sardinia. In terms of scenery in the South, there's Bavella, which is famous for its winding routes up into the mountains; in the North you'll find the Castagniccia, which according to some is the largest chestnut forest in the world. I could go on...

What type of bike do you recommend for road riding?

Either a good hybrid with plenty of gears or a road bike – it's a personal choice. The most important thing is to ensure you have a bike in good working order and that you're able to deal with punctures and minor repairs. Check your brakes every morning as you'll be in need of them on the long descents! If you're hiring a road bike, you might want to bring your own pedals; some people also bring their own saddles to make sure they have maximum comfort. If you're carrying your own luggage, pack lightly so you don't struggle with the climbs, or book a holiday where your luggage is transported for you so all you have to do is enjoy the ride.

What does Corsica have to offer mountain bikers?

Corsica is a fantastic place to mountain bike. Sadly there are very few marked trails. It's probably best to go with a recognised tour operator who'll be able to give you maps and local route notes. If anyone has done a lot of mountain biking on Corsica and has some feedback, I'd love to hear it.

What's the infrastructure like for people who want to cycle independently?

Bringing your own bikes is fairly easy during the spring and summer if you're coming from the UK. However many people opt to hire bikes as they are uneasy about their 'beloved' being thrown around by baggage handlers on the plane. From mainland France or elsewhere in Europe,  Corsica is easy to get to on the train (Eurostar and TGV) and then ferry.

Once on Corsica it's quite difficult to take public transport with a bike, so it's better to plan an itinerary that allows you to cycle from place to place. The policy of taking bikes on trains and buses isn't clear and often depends on how crowded they are or on the mood of the driver. If you book a cycling holiday through a tour operator, they'll usually include your transfers.

Touring independently is possible and many people do it, although it does require some planning. I would never leave booking accommodation to chance in Corsica, especially in the summer months. Having a basic level of French would also be an advantage, particularly in the interior. However, even if you don't speak good French, general courtesy and a nice smile will get you a long way.

Self-guided holidays are very easy. Your tour operator should give you the maps and the route notes, the bikes (if you decide to hire), book all your accommodation and even transport your luggage to each night's accommodation.

There are lots of accommodation options, from campsites to gite d'etapes, B&Bs, hotels, hostels and refuges (dormitories). Accommodation is generally basic and clean, if a little on the expensive side. Prices increase for July and August and places on the coast book up quickly. If money's no object, there are some super four- and five-star hotels.

There are tourist information centres in most of the big towns and tourist areas, although finding one that's open when you need it could be more of a challenge!

What sort of budget should an independent tourer factor in for accommodation and food?

Corsica is not cheap, but it is possible to keep the costs down. Firstly, book your flights, train and ferry tickets well in advance. Expect to pay about €40 per person for B&B, although most hotels have a single supplement, so travelling alone will be more expensive. Taking the evening meal in your hotel (demi-pension) can be better value than eating out. If you do eat out, the fixed menu (three courses) is normally cheaper than the regular a la carte menu. Also, buy your lunch in a boulangerie in the morning – most shops are closed at lunchtime, so if you haven't bought anything, you'll need to go to a restaurant for lunch as well.

How should visitors expect to wind down after a day's riding?

Corsica takes its food and drink very seriously, offering real ‘country cuisine’ which is perfect for filling the bellies of hungry cyclists. It's a meat-loving island with wild boar (sanglier), goats, sheep and pigs providing the staple diet. Prisuttu (cured ham), figatellu (liver sausage), lonzu (dried fillet), coppa (dried sirloin) and salame (salami) are just a few examples of the many pork specialities found on the island. The Corsican scrub or ‘maquis’ also gave itself to cooking, with plenty of wild herbs, such as wild mint, rosemary, laurel and catmint. Honey is also a local speciality with six official varieties, as are chestnuts. Chestnut-flour (pulenta) turns up in many guises, both sweet and savoury, and the local chestnut beer (Pietra) is an excellent thirst quencher after a long day’s ride. There are many good local wines worth trying too.

There are fewer options for vegetarians, but it’s still possible to eat well. Corsicans pride themselves on their goat's and sheep's cheeses, which can be found on most menus. Two classic dishes for vegetarians are the ‘Omelette à la menthe’, which usually includes a tasty combination of brocciu cheese and wild mint, and the ‘cannelloni al brocciu’. Corsicans have been heavily influenced by their Italian neighbours, too, so pastas and pizzas are widely available.

What final advice do you have for anyone thinking about a cycling holiday in Corsica?

Don't think any more about it – just come! You'll have a fantastic time!

Corsica Ferries has services to Ajaccio from Nice on the mainland, as well as ferries from Nice to Calvi and Ile Rousse; and Toulon to Ajaccio, Calvi and Bastia. There's also Toulon to Bastia ferry.

It's also possible to sail between Corsica and Italy with Corsica Ferries, which has routes from Livorno and Savona to Bastia. Moby Lines sails from Genoa to Bastia and from Livorno to Bastia. SNAV has a crossing from Civitavecchia to Porto Vecchi. Moby Lines also has a ferry to Bonifacio from Santa Teresa di Gallura, Sardinia.

All ferry tickets can be booked via Southern Ferries.

Another option is to fly to Nice or Marseille with Air France, British Airways, BMI, flybe.com or EasyJet (among others), and cross by ferry. Alternatively, fly to Pisa in Italy and cross by ferry from Livorno.

Use my bespoke service.

Search here for accommodation. Drop me a line at lyn@freewheelingfrance.com if you can recommend a bike-friendly place to stay.

Use my bespoke service.

The official tourist website has downloadable brochures, including a comprehensive 'practical guide'.
For local train information, see the TEF/SNCF site.
CorsicaCyclist is an excellent local resource.