Cycling Caen to Honfleur (and back) 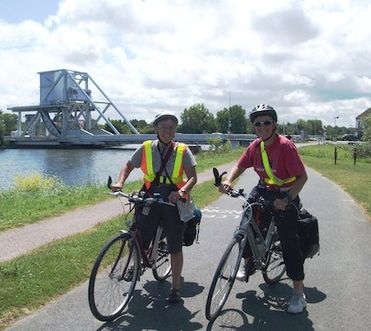 The girls on the road near the Pegasus bridge. 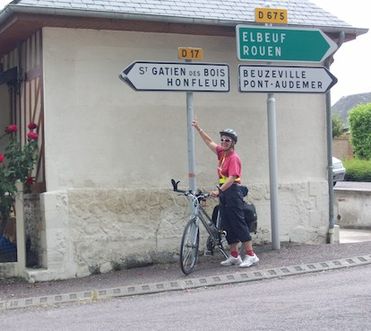 On the way into Honfleur.

Hilde Morris is back! She's sent me this report from her latest French cycling adventure with partner Heather Godrey. Here's what they got up to as they rode from Caen to Honfleur via Brionne – and back again.

This year we decided to explore more of the Normandy coast, I especially wanted to visit Honfleur and Ponte Audemer, places I already know from the Impressionist paintings of that area.

We took the Wednesday night ferry to Ouistreham (Caen), arriving nice and early, ready for our four-day ride. This was going to be quite challenging as we were not following cycle paths (there aren't many!) and apart from the lovely stretch along the river Risle, we had to make our own way across country, along minor roads, choosing a route that more-or-less went in the right direction.

The circuit we followed was this Caen bike route but rather than follow it all the way round, going deep into the country, we turned round just south of Brionne, returning along a different route after Pont Audemer.

There is a lovely cycle track along the canal from Ouistreham to Caen and we followed it until we reached the Pegasus bridge, famous WW2 spot.

Over the bridge, we followed D roads across country. Our plan was to cycle way south of Honfleur and our chambre d'hote that night was in the tiny hamlet of Genneville.

Stopping at Dozule and Pont L'Eveque en route, we wandered through countless leafy lanes and byways, sped down lots of hills (and pushed out bikes up the other side!), and all went well until we were 5km from our destination.

The black clouds that had been hanging around all day suddenly emptied over our heads. We barely had time to pull on our waterproofs and arrived at Genneville, drenched.

We sheltered in the church until we got our bearings and soon found our B&B (chez M. Daniel Neel), which was superb, we had a very warm welcome, hot drinks and a place to hang all our wet clothes. Supper was at a marvellous pancake place just across the fields and as the rain had passed by then we enjoyed the walk and the food.

The next day, again making our way across country, we arrived at the lovely town of Pont Audemer where the market was in full swing. We ate our lunch on the steps of the ancient church and cycled out of town to the banks of the River Risle.

From then on the cycling is idyllic, still on road but traffic is rare and the countryside is beautiful. We again had to cycle through rain but this time it was not torrential.

We stopped for tea in the little town of Brionne before cycling south a few kilometres to La Riviere Thibouville, a small village which nevertheless boasts a hotel, Le Soloro, where we stayed. Our hotel had obviously seen better days as the gardens were overgrown and from the outside it looked rundown, but la patronne was very friendly, our room was lovely and we ate at the hotel that evening. It was reasonably priced and a good place to stop.

The village bar is good too, we enjoyed a very acceptable vin blanc, sitting in the sun, after our long day.

The next morning, Saturday, we turned back along the river, making for Honfleur. We followed our outward route as far as Pont Audemer but this time it was not raining and we enjoyed the ride a lot.

After coffee we carried on along the river for a while, until another cloud-burst forced us into a little church to eat our lunch. Soon afterwards we reached the Seine estuary.

On the map there is a path marked all along the river meadows but sadly it is rough sand and large pebbles and not good for bikes so we had to return to the road, arriving at Honfleur mid-afternoon.

After an ice-cream enjoyed sitting in the bustling port we set off to find our B&B, Les Coquillettes, 2km to the west of Honfleur at Equemauville.

We had chosen to spend the night on the west side of the town as we needed to make an early start the next morning. The road out of town goes up a long steep hill, and we were pretty tired by the time we got to the top, however it was a good choice, again reasonably priced and a smashing breakfast.

Honfleur is a delightful town, we strolled down in the evening to explore and had supper at a restaurant in the old port – life doesn't get much better! 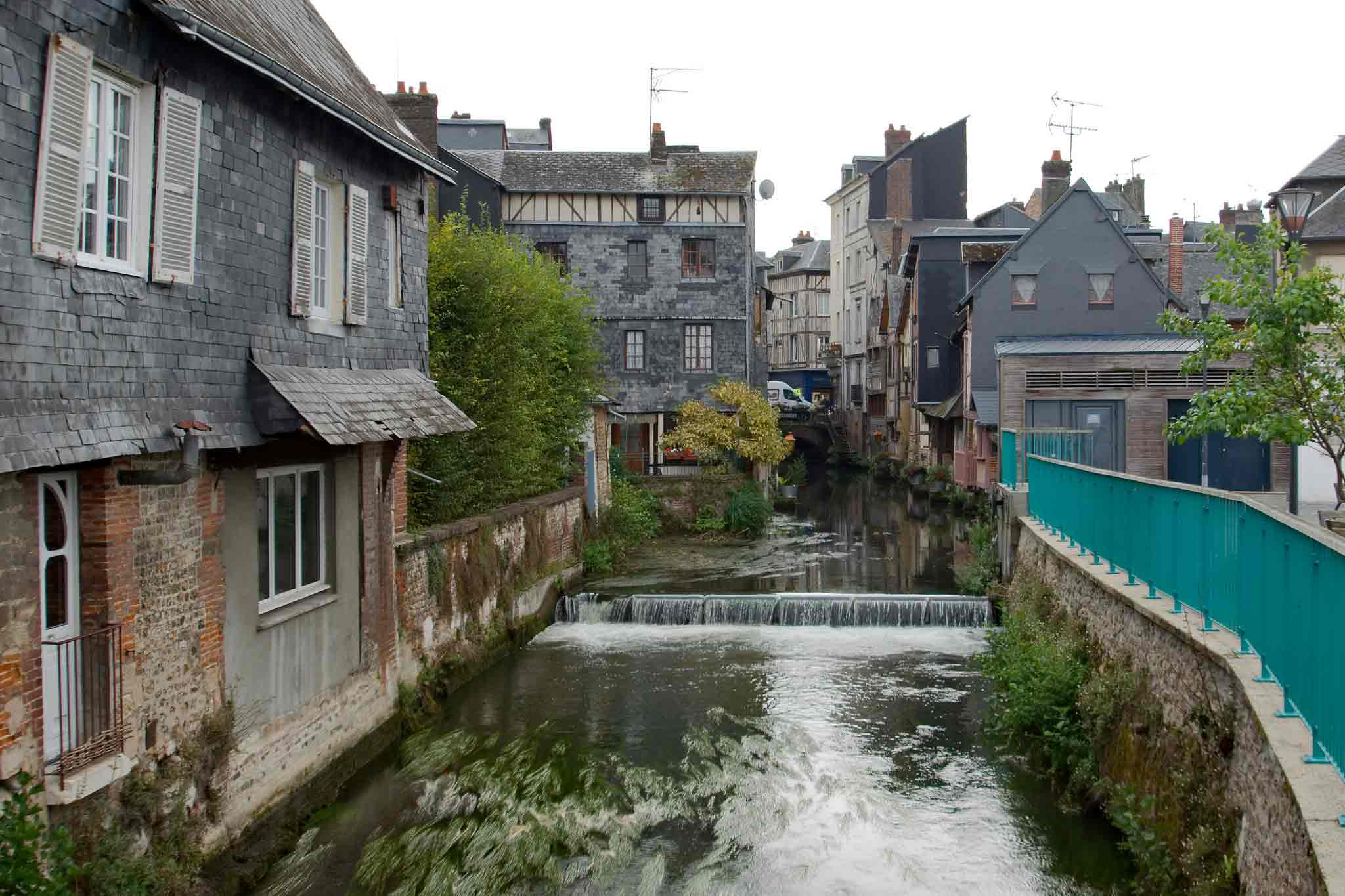 The river Risle as it runs through Pont-Audemer. Photo: Frédéric Bisson

The route on our last day was quite straighforward, following the coast the whole way. Our first stop was Trouville where there was a huge Sunday market so we allowed ourselves half an hour to wander round before heading off. Alas, as we left the town the heavens opened and this time there was no let-up, the rain was torrential, at one point it was so heavy that we dismounted and took shelter.

It was a bit worrying as we still had a good way to go, we had to be at the port by 3pm, but after about half an hour it let up slightly and we went on our way. Around lunchtime the sun came out and we stopped for lunch when we reached the canal, arriving in Ouistreham with time to spare we sat in the sun drinking a beer.

This is a relatively easy route for 'leisure' cyclists like us, who are more interested in exploring than getting from A to B. The roads, even the minor ones that we used, are superb, no potholes, a lovely smooth ride.

In theory there is no special provision for cyclists but on the main roads a thick white line is painted about 70cm from the edge of the tarmac, this gives bikes just enough room and means that traffic does not have to swerve out to avoid them, I felt quite safe, much safer than in England!

I should mention, though, that this route is quite hilly in places. Fortunately we had allowed enough time to dismount and push our bikes up the slopes.

The best part for me was definitely Honfleur and the valley of the river Risle, I would be happy to go back and follow the river from Brionne but next year we are heading south to the Loire valley. Watch this space!

More on cycling in Normandy

Books and maps for cycling in Normandy

Richard Peace and Andrew Stevenson's Cycling Northern France (UK, US) guidebook is a 260-page spiral bound book with waterproof map of bike routes across Normandy and other northern regions.

IGN's 1:100,000 Tourisme et Découverte series has maps coverng the region in details, including Caen Cherbourg-Octeville (map 106), Rouen Le Havre (107), Laval Fougères (116), Caen Evreux (117). There is also a map that takes in both Upper and Lower Normandy.

Many tour operators have Normandy itineraries with accommodation and luggage transfer included. Also provided are maps and local advice and gudance. See our recommendations here.