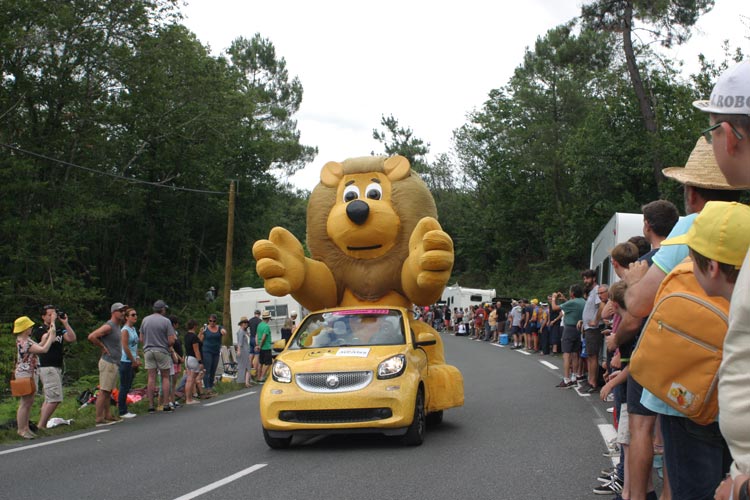 The Grand Depart, which had been scheduled for Copenhagen, was moved to Brittany due to the crazy 2021 sporting schedule that has resulted from the coronavirus pandemic. The rescheduled 2021 European football championships has games in Denmark in June. Bringing the Tour de France back inside French borders, therefore, was seen as a sensible precaution.

The Grand Depart will instead take part in Copenhagen in 2022.

The 2021 Tour de France dates have also been brought forward a week to avoid clashing with the 2021 Tokyo Olympics. 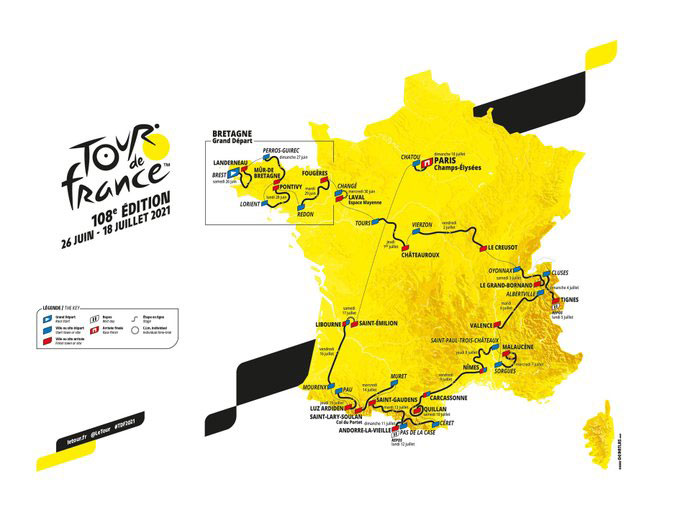 Specific info on each stage and more detailed maps are also usually published online each May and in the official race program. We'll post links to it when it's released.

We have this page for Tour de France road closure information, which we also update as information comes to hand (usually not from around May onwards).

See here for accommodation near the route (it will also be progressively updated throughout 2021).

The 2021 Tour de France will return to Brittany for 4 stages, starting in Brest. Given the uncertainty surrounding the coronavirus pandemic, the organisers undoubtedly see Brittany as a 'safe pair of hands'. Some 170 stages of the Tour have been held in Brittany since 1906 and 33 towns and cities have been hosts, so there is plenty of TDF experience in the region. It's also a region steeped in Tour de France folklore, with Brittany being the home of French cycling heroes Lucien Petit-Breton (Tour de France winner in 1907 and 1908), Jean Robic (1947), Louison Bobet (1953, 1954 and 1955) and Bernard Hinault (1978 and 1979, 1981, 1982 and 1985). 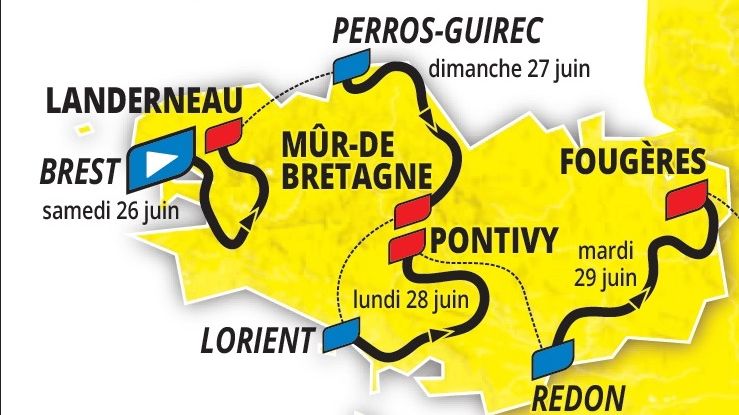 If you are planning on being in Brest, the team presentations will take place on Thursday, June 24, most likely in front of the town hall as they were in 2008. 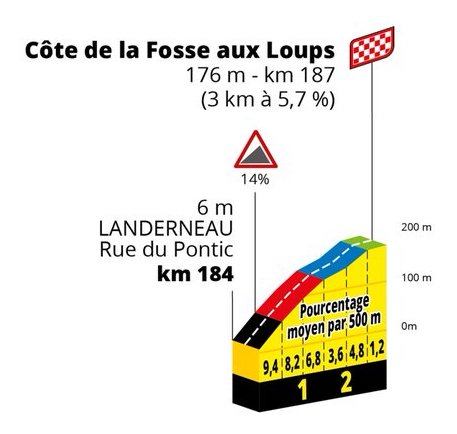 A return to Mûr-de-Bretagne – not once, but twice. It's not the Ventoux (see stage 11) but it's a mythical local climb with a long Tour de France history. 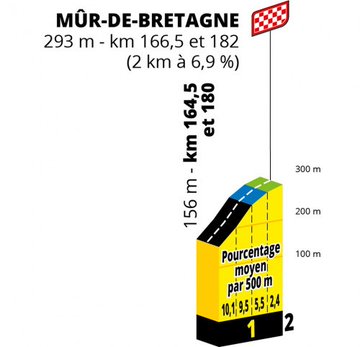 Today will also be the women's race, La Course by Tour de France.

The first chance for the sprinters. Flat, flat, flat.

Another day for the sprinters. British cycling fans will remember Mark Cavendish winning here in 2015.

A flat stage to suit the sprinters through the vineyard region of the Loire, heading southish from the mighty river. Anyone who has ridden through here will attest to its beauty, though these 144km will be a bit faster than most people ride when passing through Tours on the EuroVelo 6.

The longest stage of the Tour includes a climb never used by the TDF before – Le Signal d'Uchon climbs 5.7km at 5.7%. 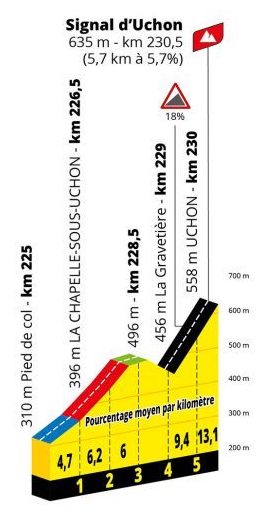 Le Grand Bornard is back – so too is neigbouring Col de la Colombiere, which offers a tasty final climb at 7.5km at 8.5%. Cote de Mont-Saxonnet and Col de Romme provide the starters. 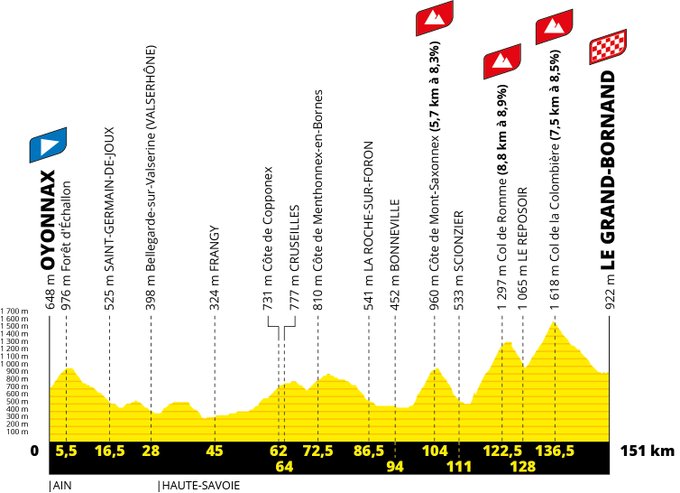 Tignes is back after the snow storms and landslides of 2019 wrecked its showcase stage finale, Bernal snatching yellow from Alaphilippe on a shortened stage. 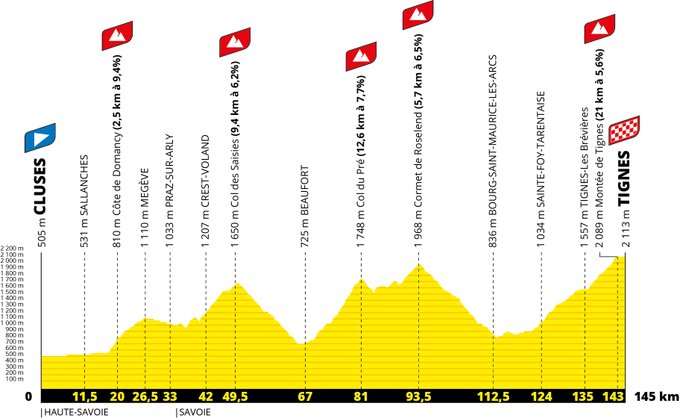 From the Alps to the banks of the Rhone River at Valence. It won't be a leisurely stage like cycle tourist usually enjoy when they venture to the Via Rhona bike route. Expect a sprint finale. 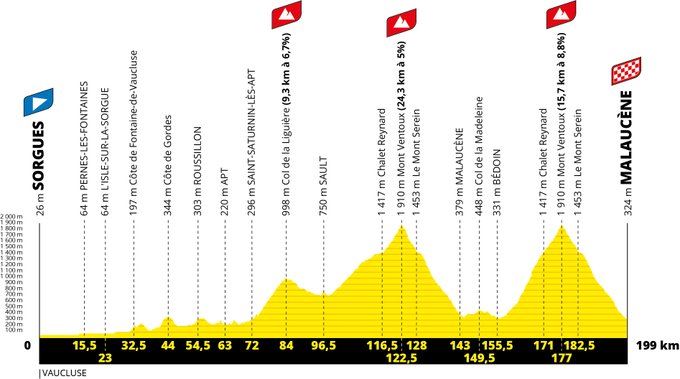 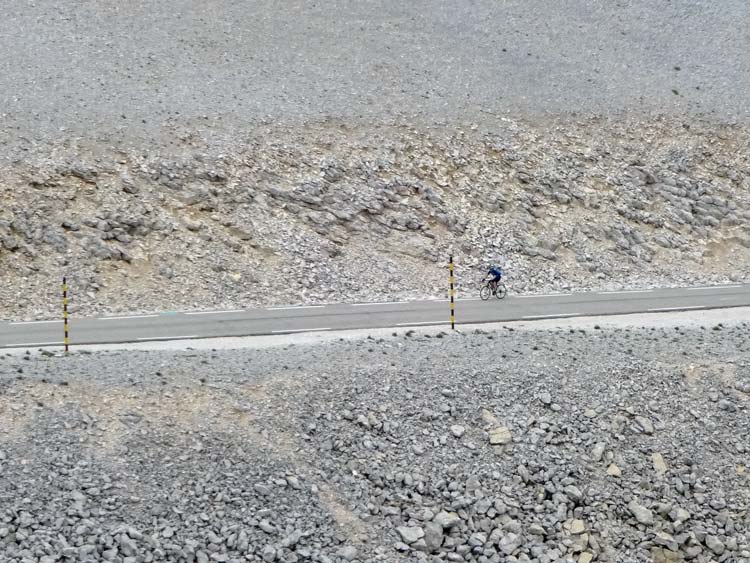 It can be a lonely old climb from Bedoin to the summit of the Ventoux, especially on a hot day in the middle of summer. The ride up through the dreaded forest can seem never-ending, only to emerge into a moonscape to see the elusive weather station only a dot in the distance.

The top of the Ventoux was closed to traffic for most of 2020 as work was undertaken to repave the road and get it in top condition for the Tour de France's return.

2021 signals the first time the Giant of Provence has featured since windy weather scuppered a summit finish in 2016 - the same year *that* motorbike calamity took place, resulting in this strange sensation:

Say what you want about the Ventoux, but whether you are an amateur rider crawling up its sides so slowly that your Garmin autopauses (who? me?), or a Tour de France spectator, it never – never – disappoints.

Back to the sprinters and a bunch finish as the parcours edges closer to the Pyrenees via the ancient Roman city of Nimes, which is now a fairly regular Tour town.

This is one for the helicopters and the local tourist boards as the TV cameras drift over the iconic turrets of the old city of Carcassonne. Expect another sprint finish if you can take your eyes off the scenery.

Into the Pyrenees with three fairly gentle but not insignificant ascents to warm those GC legs up. This area is a beautiful and often under-rated (and under-cycled) corner of the Pyrenees. 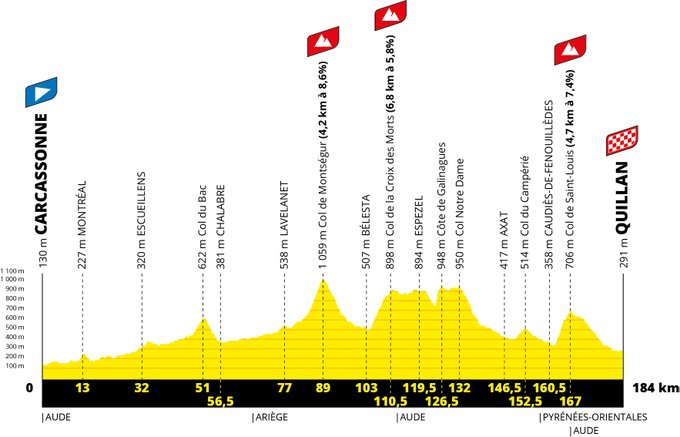 The only border being crossed in this year's Tour is the one marking France from Andorra on stage 15. This stage also has the highest col of the entire parcours, the Port d’Envalira's Souvenir Henri Desgrange, which comes in at a mighty 2408m. The route finishes in Andorra ahead of a rest day. 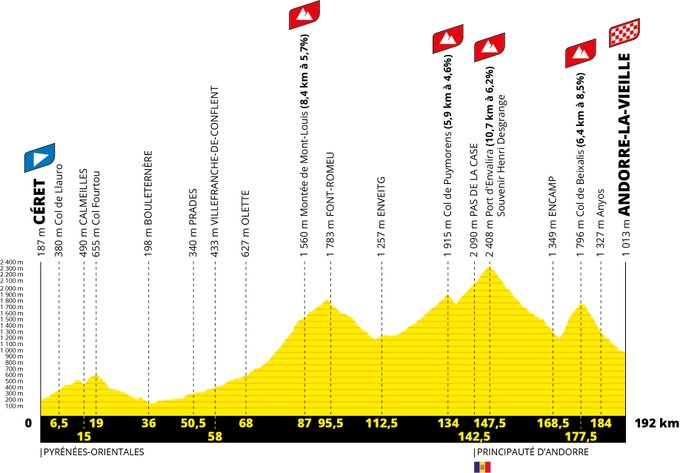 One for the breakaway riders.

This is a tough day, with the stage taking in the Col du Peyresourde and the Col de Val Louron-Azet before finishing on the Col du Portet. 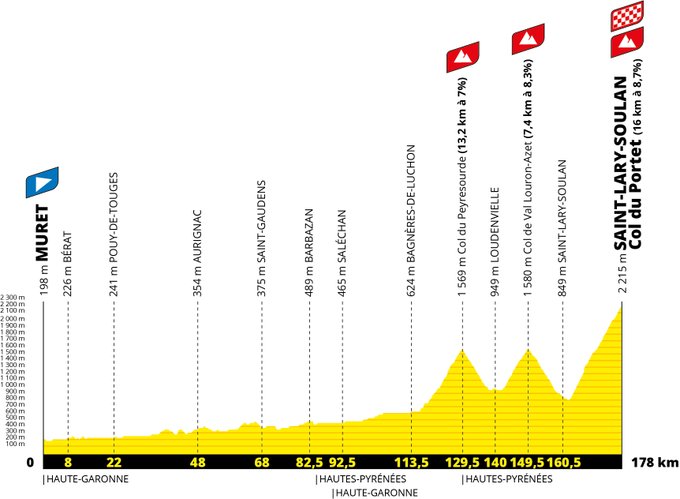 Staes 19 and 20 are personal for us at Freewheeling France as they are roads local to us – and the Tour rarely comes this close to us. Libourne, where the mighty Dordogne river meets the river Isle, has pipped its big sister Bordeaux as this year's stage town. Libourne has invested a lot of money in recent years in its development, converted te riverfront into a pedestrian promenade and supporting local restaurants and cafes to liven up the city.

This is the first of two stages in the heart of some of the word's most famous – and beautiful – wine country. Beds among the vineyards will be at a premium for these two days heading into the weekend, though Bordeaux city centre would be a fine base as well. It's linked to Libourne via the signposted EuroVelo 3 and to Saint-Emilion via this lovely rural route. All three are linked by local TER trains (train info here). As for all stages, I'll add accommodation options here.

A time trial through the vineyards of the wonderful Pomerol to the UNESCO Heritage Site of Saint-Emilion. Expect lots of helicopter shots of rolling vineyards and Roman ruins if you're watching at home.

Bonus points will be up for grabs at the end of each regular stage, giving the first three riders 10, 6 and 4 seconds.

Bonus points will be up for grabs at the summits of 6 climbs, handing the first three riders 8, 5 and 2 seconds.

Get the official 2020 Tour de France Race Guide: This collates all stage maps and race times into one booklet.