Published by Elliot on 6 February 2011

The excitement and colour of watching the Tour de France from the roadside was an early inspiration for competitive cyclist Roger Dunne.
Photo: Hans de Kort

It was on a club summer cycling trip to the Alps, near Chambery in 1978, when I saw two stages of the Tour de France – one that passed by where we were staying in Lescheraines and the other at the classic Alp d’Huez – that my passion for road cycling was ignited and changed my life forever. The colour, atmosphere, the Mediterranean climate, the adrenalin surging through my body and the sheer excitement of seeing my cycling heroes meant there was no going back. Over the years I’ve seen the tour climb d’Huez several times and, for me, it's the No.1 place to see the race.

I had to give up my professional career as a quantity surveyor to pursue my sport but that didn’t matter as really there was no competition between an office job and cycling. I quickly joined a top UK amateur team, Anglia Sport, based in Essex, and as a team we were regularly invited to cross the Channel to compete in races. It soon became apparent that the heart of cycling was in the Continent.

Through a contact, I was signed to ACC Contern in Luxembourg for three years and it was this team, a few years later, that produced the Tour de France winner Biarne Ries.

In my twilight amateur career I actually raced up Alp d’Huez from a town at the base called Bourg d’Oisans. It was a race I treated with total respect, and I quickly settled into my own pace to ride within myself and enjoy it. Suffice to say, I didn’t beat Lance Armstrong’s time, but I’m only human.

I ended my career in 1989/90 in the Rhone-Alps in the town of Romans-sur-Isere, 20km east of Valence and 80km south of Lyon, signed to local team that went on to produce one of France’s top pro riders, Charly Mottet. It was here that I discovered the spectacular terrain of the Vercors which offers such a superb choice of cycling routes. Funnily enough, Charly’s home town is St-Jean-en-Royans, where we are now based. This past Christmas, while Charly was home visiting his parents, we were invited to meet him. Sometimes, it's not a good thing to meet one of your heroes, but in this case it was an absolute delight and just reinforced my view that we really are living in a cyclist's paradise.

* Roger Dunne was a retired semi-professional cyclist who represented Great Britain and rode with teams in France and Luxembourg. An early supported of Freewheelng France, he sadly passed away in 2015. His partner Teresa Harte continues to run Velo Vercors, the cycling company they set up together at the foothills of the Vercors in the Drome region of the French Alps. 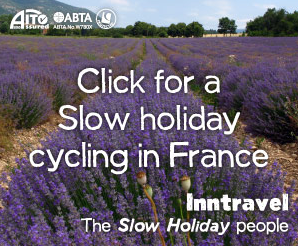