This year will be the 106th edition of the Tour de France and celebrates the 100th year of the famous yellow jersey. 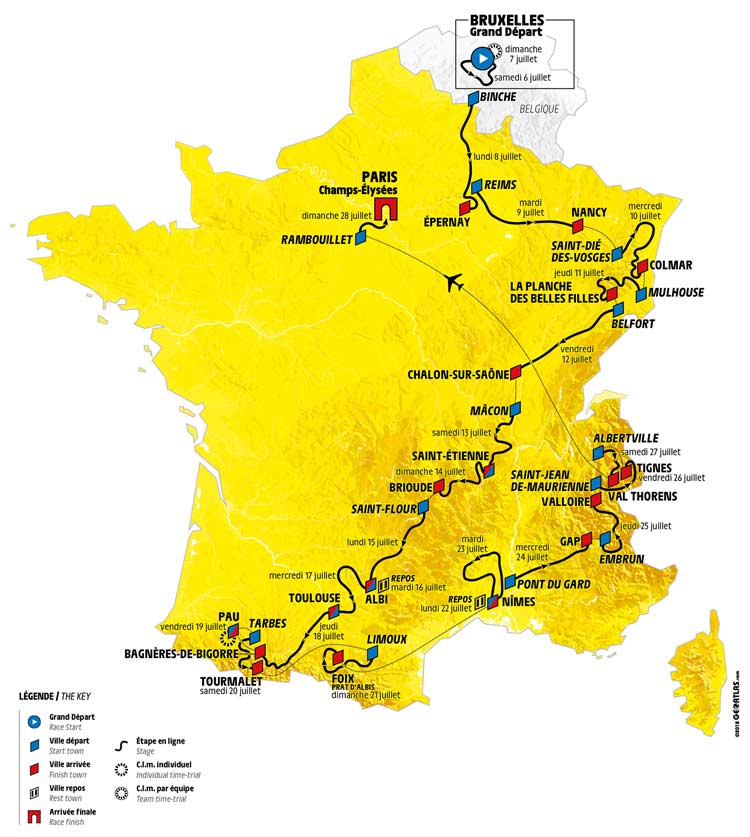 The full route of the 2019 Tour de France was announced on October 25. It's being billed as the 'highest' ever, with three stage finishes eclipsing the 2000-metre mark for the first time.

We have the route overview below – we'll add more details as they come to hand. Specific info on each stage and more detailed maps are usually published each May in the official race program. We'll post links to it when it's released. We have this page for Tour de France road closure information, which we also update as information comes to hand.

The team presentations will occur on Thursday, July 4 at 6pm at Grand Place.

** All the information below is included in the Official Race Guide, which collates stage maps, plus stage start/end times into one booklet. It also has a pullout map of te entire route to help planning. ** 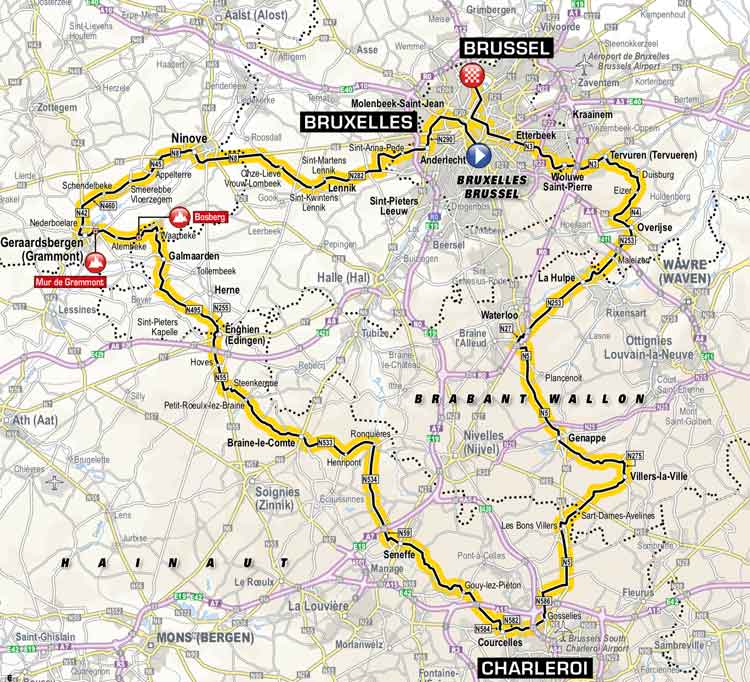 The Grand Depart this year will be based in Belgium as a tribute to Eddie Merckx who won the first of his Tours de France 50 years ago in 1969. That year he also won the mountains and points classifications (oh and the Tour of Flanders and the Liège-Bastonge-Liège as well).

Stage 1 is an interesting stage with some 'murs', including the steep Mur de Grammont and a small 1.1-kilometre cobbled climb (9.2%) to shake things up. The route heads past the Lion Mound memorial where Napoleon was defeated during the Battle of Waterloo, so this could be an interesting place to watch. There are 200-odd steps up for a vista over the battlefield and there is a museum dedicated to that battle. Should be lots of fans around the route here to see a sprinter take the win. The 'Depart reel' is at noon from Molenbeek. The caravan should leave around 2 hours earlier. 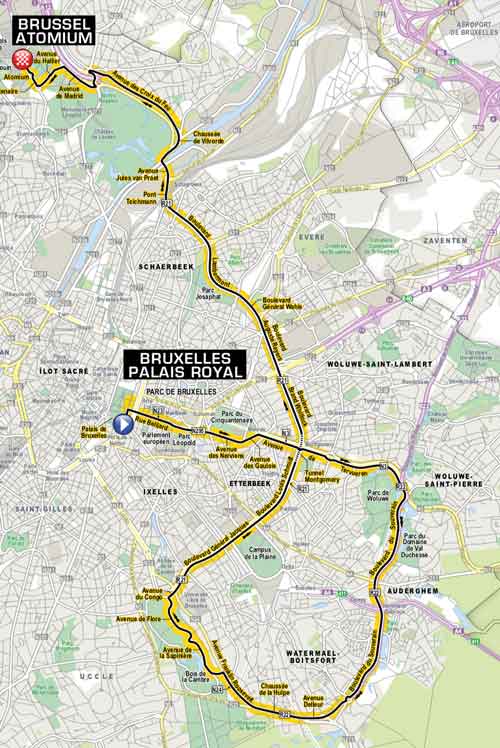 A team time trial with lots of false flats. Expect lots of photos with the famous Atonuim building in the background acting as the finish line. First team departs at around 3 to 3:30pm from Place Royale. The caravan should leave around 1pm.

A long but relatively gentle welcome awaits the riders on the French side of the border, with a succession of punchy climbs coming in the latter half of the stage. The Côte de Mutigny could be ideal for a cheeky shot at glory. 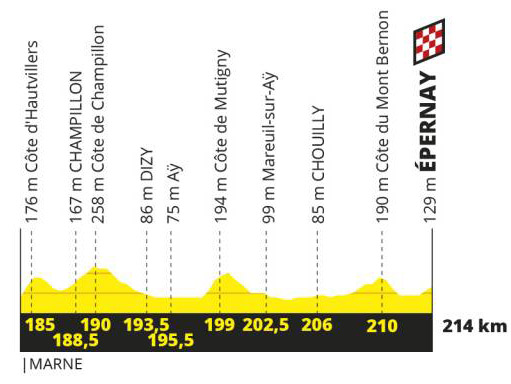 Anyone for Champagne? It may be too early in the race for bubbles in the peloton but there's nothing to say the rest of us can't indulge. Reims is the gateway to France's famous Champagne region, and it's also home to a fast-growing network of leisure bike routes. The pros won't be seeing any of that as they whizz towards Nancy, where a sprint should ensue on the home stretch into the city.

The Vosges are one of the least-cycled mountain areas of France, but people who ride here do so for good reason: the roads are relatively empty and the scenery is stunning. The glorious Haut-Koenigsbourg chateau is just one of the treats on offer today in the Alsace, where the riders will start warming their legs up for the first 'proper' climbs of the 2019 Tour de France with the Côte des Trois-Épis, among others. 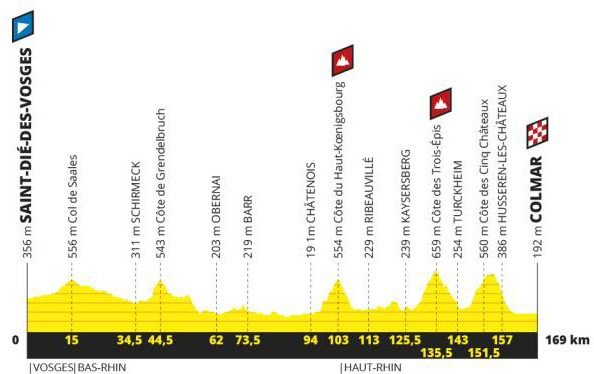 La Planche des Belles Filles is an old Tour de France favourite and it's always a popular place to watch. But it's not the only climb on the cards for today: the Markstein, the Ballon d’Alsace and the Col des Chevrères all come before the showcase climb of the day. This will be a tough day for any stragglers already struggling to make the time cuts. 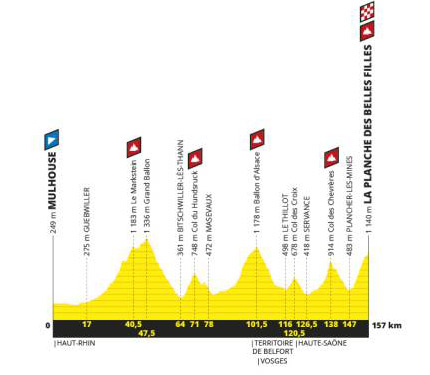 This is the longest stage of the 2019 Tour de France, and it has an artistic theme. The route passes through Ornans, where the French painter Gustave Courbet was born in 1819. The passage of the Tour marks 200 years since his birth, and will give a nod to the 19th century Realism art movement. It should all end in a sprint finish near the banks of te river Saone. This is an ideal stage for spectating if you're interested in exploring the Burgundy vineyard bike routes.

Another hilly stage, this time through the vineyards of the Burgundy region. There is a quick succession of smaller categorised climbs en route to Saint-Etienne. In total there is 3,800 metres of climbing in the 199km. 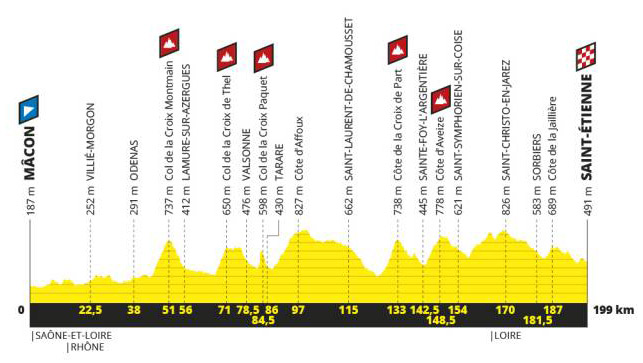 A lumpy stage that could see an exciting breakaway, this stage stretched from this Loire and into the Auvergne. 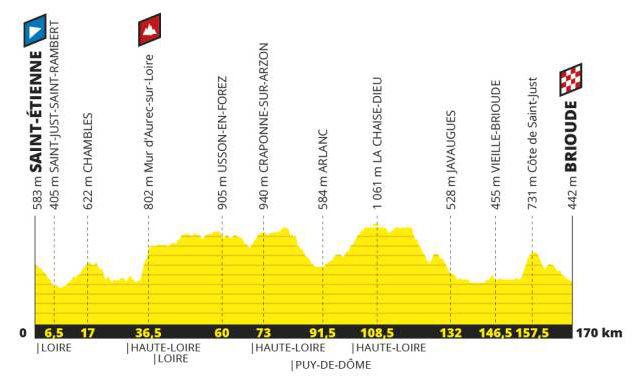 A mostly flat stage as the Tour enters the Pyrenees, starting in the wonderful Tarn department, which is a proper treat for cyclists, as is Albi – for cyclists and tourists alike.

A day of rest in the foothills of the Pyrenees and an excellent opportunity for spectators to stretch their legs into the hills. This is a great area for cycling and within reach of cycling for all abilities. (See here for a few ideas).

Stages 11 and 12 will be two of the most accessible stages for spectating at this year's Tour de France. Toulouse offers excellent transport links, with an airport as well as a fast TGV train link to Paris. This stage itself will be flat and probably best caught as a stage start or end, or on a roadside with the locals just out of town.

Hello Pyrenees. It's up, up, up all day today from the flat streets of the Pink City of Toulouse to the heights of the iconic French mountain range. Stage 12 culminates with climbs up the Peyresourde from Bagneres-de-Luchon and across the top to Bagnères-de-Bigorre via the stunning Hourquette d’Ancizan. This will be a real marker for the climbers and separate the pretenders from the contenders. Accommodation will be at a premium and hard to find here the closer the Tour gets, so book well ahead (see this page for accommodation ideas). For bike hire go here. 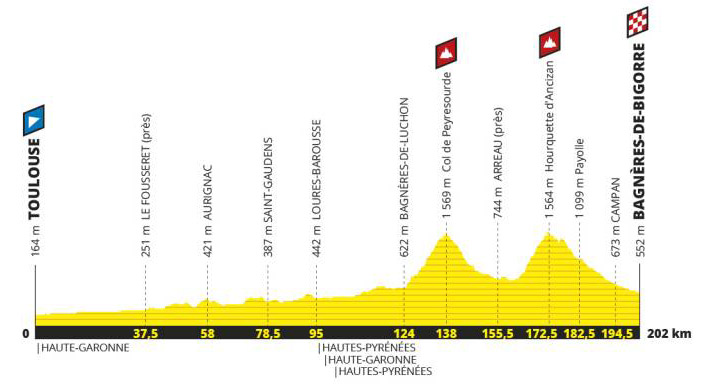 The Tour de France wouldn't be the Tour de France without a stage in Pau (does anyone even remember the last time Pau *wasn't* on the route?) This year it'll be a nippy 27km individual circular time trial. It's the only ITT in this year's Tour and it's a bit lumpy. Whoever wins yellow today will wear a special, one-off 100th anniversary yellow jersey made for the occasion.

Stage 14 will be one of *THE* highlights of the 2019 Tour de France, with only the Ventoux or Alpe d'Huez rivalling a mountaintop finish on the Tourmalet (via the often under-rated Col du Soulor). As with stage 13, make sure you book accommodation and bike hire well in advance. 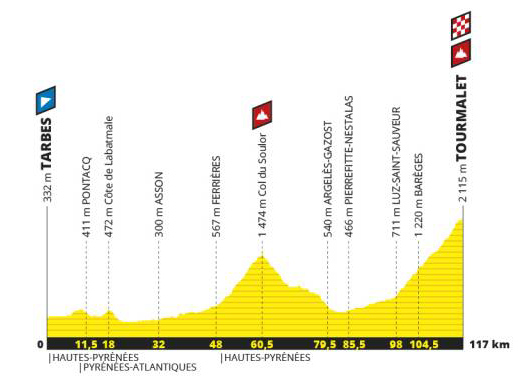 Into the land of Cathar castles and ancient trading routes. None of that will concern the riders, who will be more focused on a few nasty climbs that will bring little relief after the Tourmalet. First up are the Côte de Montségur and the Port de Lurs before the Mur de Péguère, a mountain pass that comes in at 9.3km and 7.9%. The day will end with a bimble up Prat d’Albis – at the end of 12-kilometre climb that averages 6.9%. In total, today has 4700 metres of climbing in the 185km.

Great place for a rest with plenty to see and do locally, in particular a wealth of Roman heritage and natural wonders.

An unusual loop stage that will be ridden entirely within the boundaries of the Gard department. Riders will actually cross the famous the Pont du Gard Roman aqueduct, which should be a spectacular sight. Whether spectators riding the route prior to the main event will be afforded the same privilege is yet to be confirmed. This will be a flat stage and one for the sprinters.

Again Pont du Gard takes centre stage as the heritage theme continues into Provence. Today will be a hillier affair as the Tour heads towards the Alps. The route follows the Rhone Valley, passing Orange and Vaison-la-Romaine – two more sites of historical importance. Orange's Roman theatre is a highlight, as are the ruins at Vaison-la-Romaine – a must-see on any visit to Provence. It may be a stage for the Peter Sagan and Michael Matthews-style riders as the breakaway endeavours to survive the climb into La Sentinelle in the last 10 kilometres.

It's into the high mountains of the Alps for a day of pure climbing. The altitude meter hits 2000 metres in three different spots – this day in no small part contributes to the 2019 Tour being the 'highest' ever. There are big names galore today: we go up Vars, the Izoard and the Galibier. 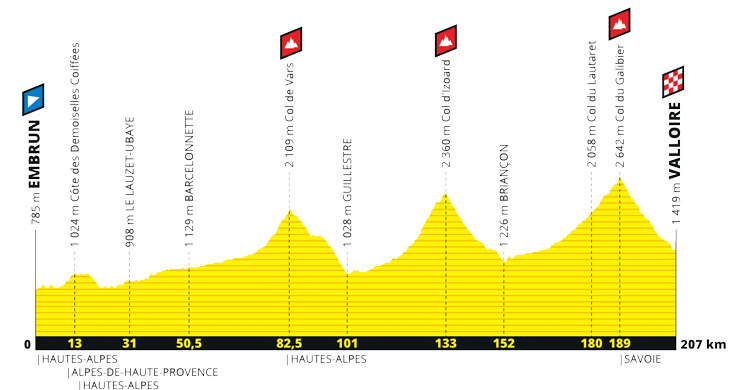 This could be a key stage as the race gets closer to Paris. Stage 19 takes in the brutal Col de l’Iseran (2770m) – just the eighth time it's been used in the Tour and only the second time via the 'harder' south side.

This is where the Tour could be won (or lost). Can the yellow jersey hold on or will it be stolen at the 11th hour? Stage 20 will be the third finish above 2000 metres this Tour – the first time this has ever happened. The stage includes the lovely Cormet de Roselend. In total today will see 4450 metres of climbing in the 131km. This stage doubles as the Etape du Tour for 2019 (entry for which has already sold out unless you travel with a tour company, buy an accommoation package or register via the official charity). 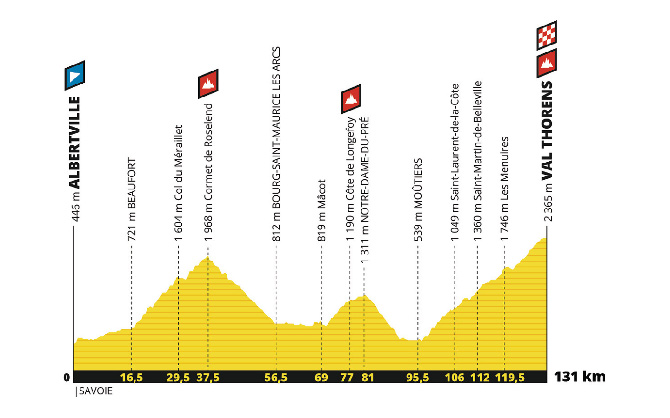 Ceremonial stage from the leafy, forested outskirts of Paris into the city centre for the traditional finale on the Champs-Élysées.

A reminder that if you need bike hire during the Tour de France you should book early. It ALWAYS sells out and it can be hard to find quality carbon road bikes closer to the time. More info here.

This collates all stage maps and race times into one booklet. You can get it here.

See here for cycle accommodation on the route