This year will be the 105th edition of the world's biggest free spectator event. Here's where the 2018 Tour de France will take us. 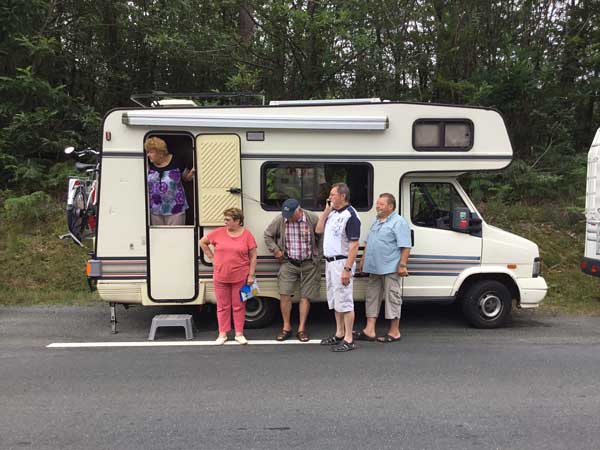 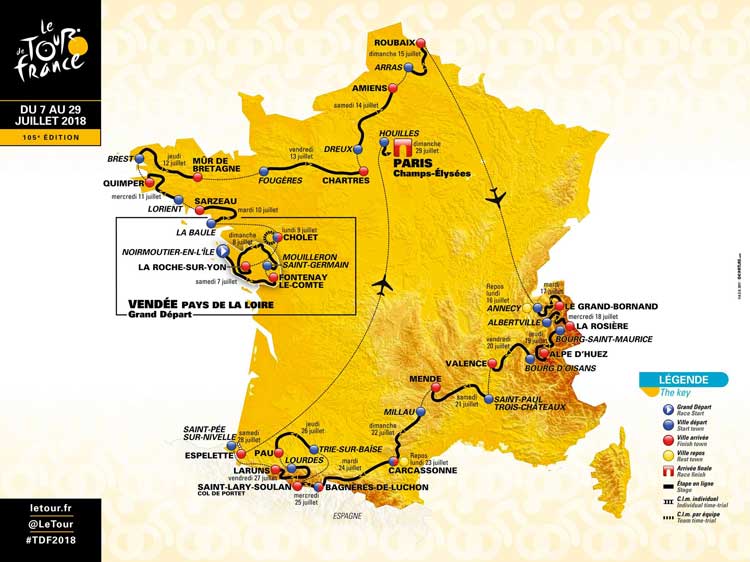 *** The Official Tour de France Race Guide is now available in English. It has all stage times and maps in one place. ***

The full route has been announced and there are some really interesting and beautiful stages to look forward to, unless you are a sprinter, in which case opportunities are few and far between. And will any of the GC contenders get past the 15 sectors of cobbles?

The annual colourful spectacle will start with the Grand Départ in the Vendée region on Saturday, July 7, 2018 from Noirmoutier-en-l'Ile. Below you can see a handy overview of the towns through which the Grand Départ stages will pass. 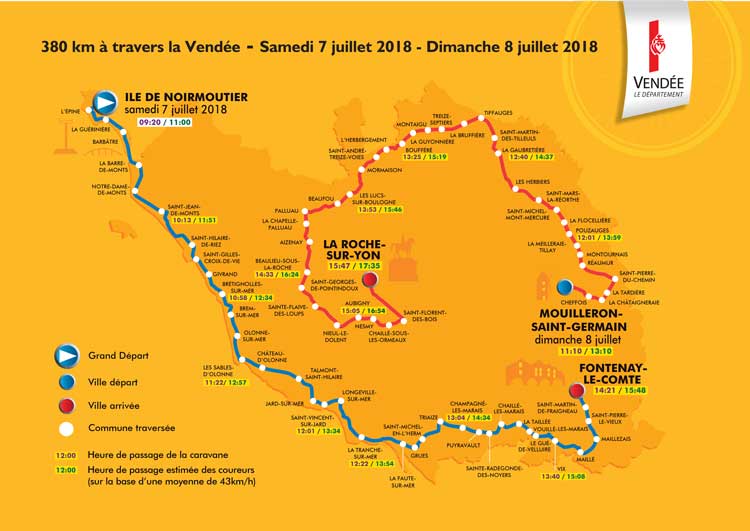 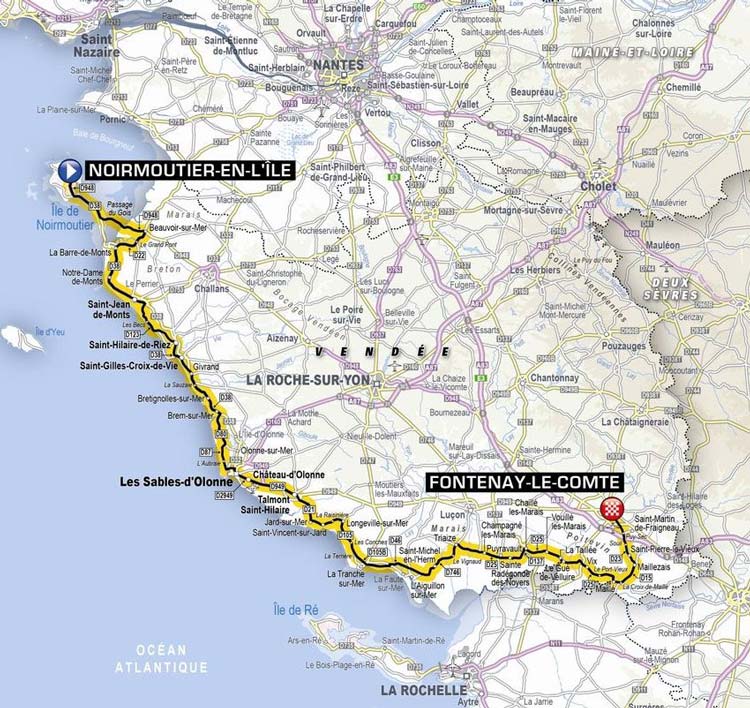 This could be a perfect chance to watch the race if you are on holiday nearby and the coastal route could offer difficult winds for the peloton. Could we see echelon gaps on the first day? 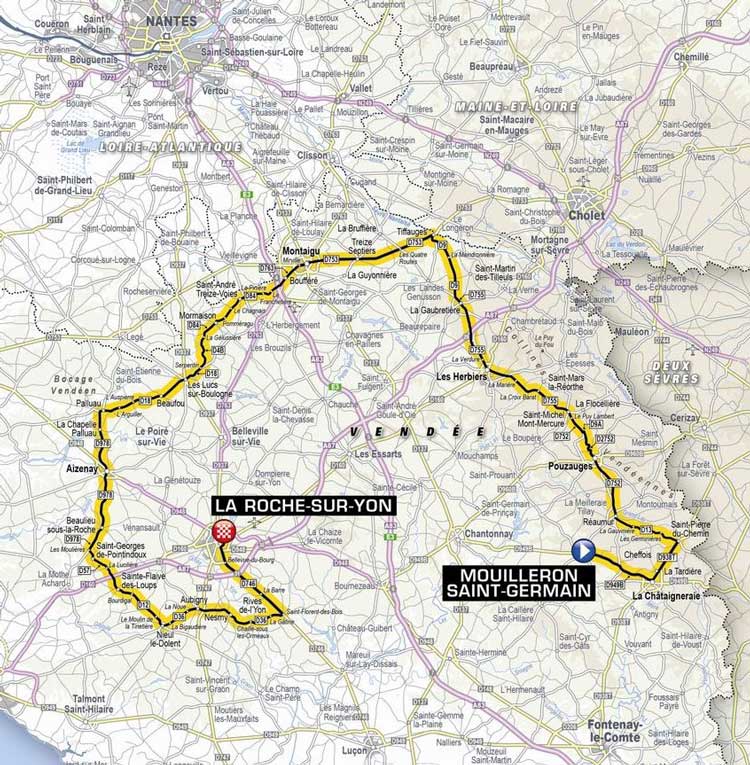 One for the breakaway.

The team time trial returns with a tricky course that starts and finishes in the city and includes an 800m climb towards the end to inflict the pain. Expect some gaps to be already apparent in GC here. 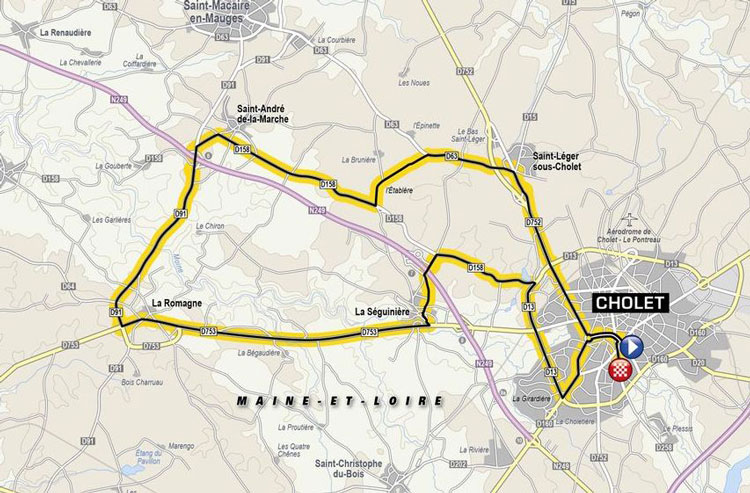 We could see some cross winds during this stage, especially in the last 40km. This stage has the longest straight section of the Tour – a whopping 4km. David Lappartient, the new UCI president, is mayor of Sarzeau, so expect the town to put on the Tour de France ritz.

The race leaves the Morbihan region for Finistère, and it's been quite a wait for these two stage towns. The Tour last visited Lorient in 2011, but it hasn't been to Quimper since 2004 – so expect this area to go all out on the hay bales and bunting. This is a beautiful, long stage with lots of coastal vistas. The finish mirrors that of the local Tour du Finistère. 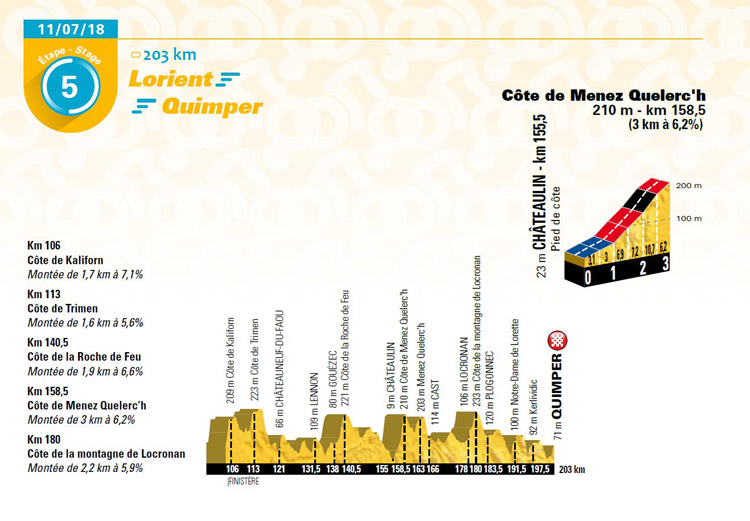 The stage ends with a final 16km circuit, with the coast at Mûr-de-Bretagne climbed twice. It's the same climb on which Cadel Evans claimed a stage win in 2011. Expect the Nantes-Brest Canal to be busy with cyclists in the days before and after!

Fougères is a Tour favourite, having hosted a stage four times in the last six years. In 2018 it gets the honour of setting the riders off on their longest stage of the Tour – a whopping 231km.

On Bastille Day, the Tour goes from the western fringes of Paris to one of the most emotionally moving parts of France – the wartime battlefields of Picardy.

If you're planning on watching in Amiens, here is the arrival:

If this is a wet day it could be brutal with 15 sectors of Roubaix cobbles spread out of the last two thirds of the race. Sector 15 is at 47km and the final sector is 8km before the finish, so the race will be difficult to control. This is also the day of the 2018 World Cup final, so the stage is set for a great day of sport – can you imagine if France makes the final in Russia?

The first mountain stage sees the race take on some epic climbs with the Col de la Croix Fry and the Col de la Colombiere featuring, along with a visit to the limestone Glières Plateau, an important monument to the French Resistance. This section includes gravel. 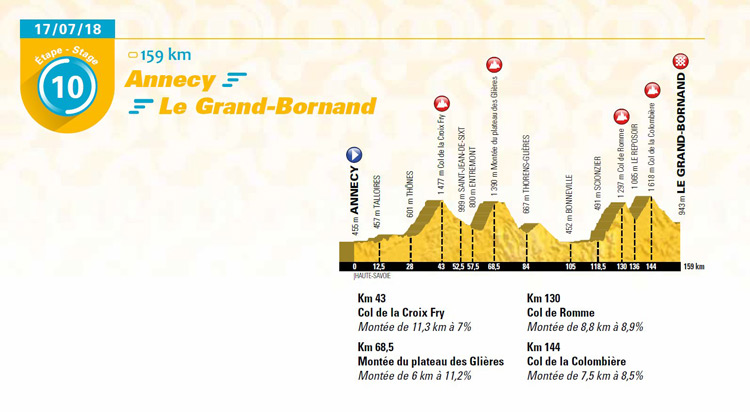 This is a brutal stage with some serious climbing and flat sections that still have an upward gradient.
This stage will also be the Etape du Tour for 2018.

A really interesting stage, not very long but lots and of climbing and descending packed in from the off. 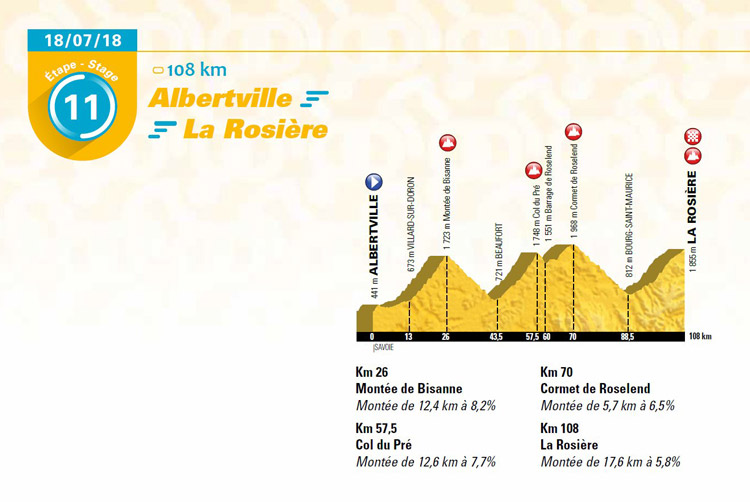 Will the favourites save their legs for this showcase stage that takes in the awesome trio of Col de la Madelaine, Col de la Croix Fer and the 21 hairpins of the Alpe d'Huez? That's over 5000m of climbing. This mountain-top finish is sure to attract a huge crowd – arrive early and be prepared to camp out for a good spot. 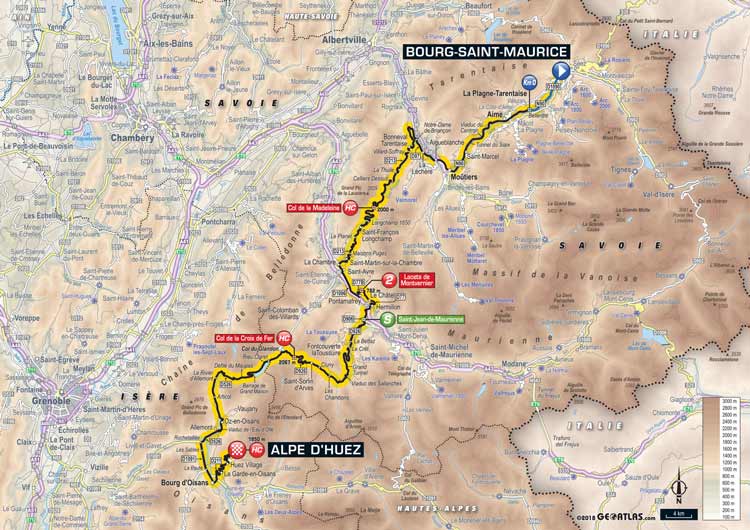 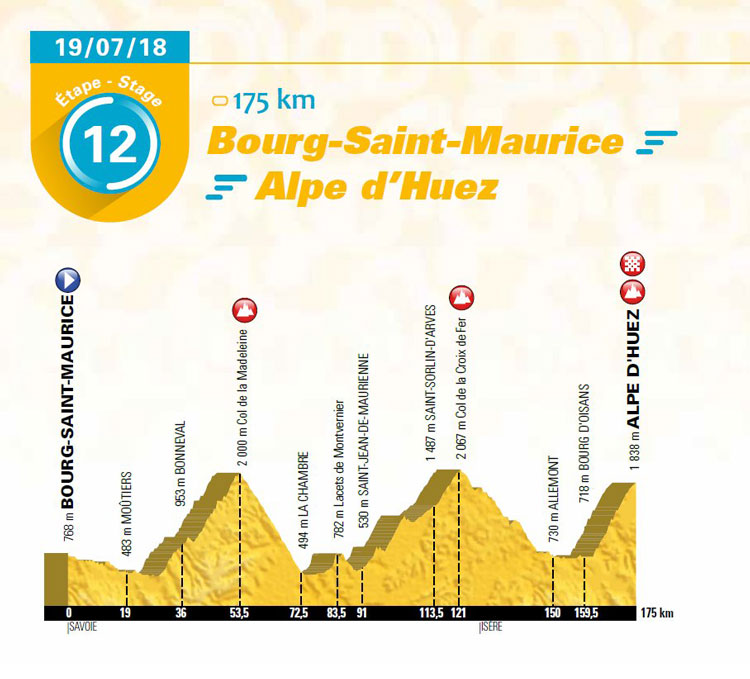 With three days in the Alps already in the legs this stage will in theory give the riders a chance to regroup on flatter terrain.

The route will pass through the Ardèche gorges, but the hills and gorges of the Massif Central will make for a tough ride, perhaps a Valverde type of day. 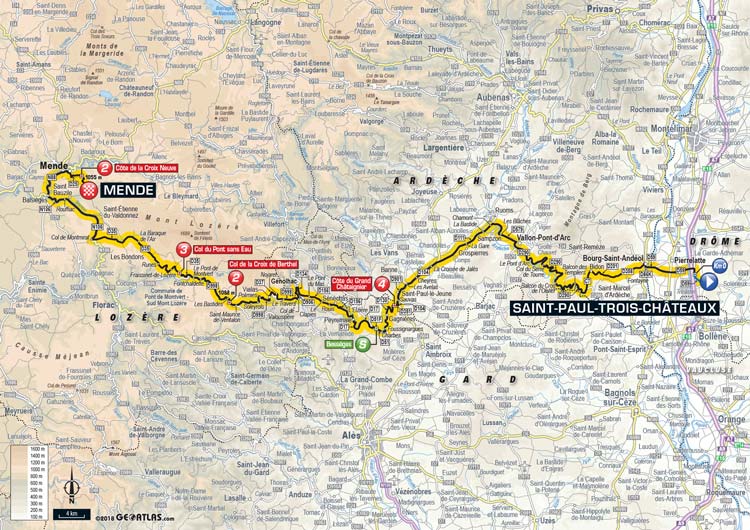 Carcassonne is showcase stage town for this Tour, hosting no less than three days, including an all-important rest day (a great money-spinner locally). For the first of the three stages, expect lots of aerial photography as the race passes under the famous Millau bridge and the finishes among the pointed turrets of Carcassonne. 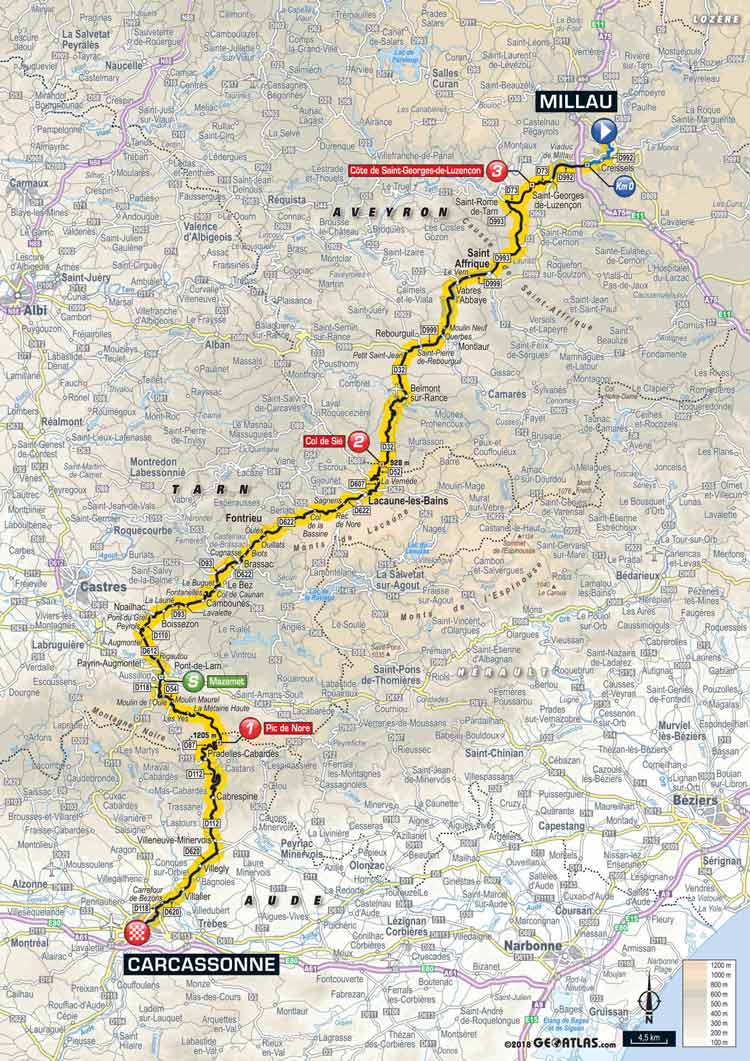 A long stage with the first 155km passing through the Aude and Ariege departments, before tackling the Col de Portet-d'Aspet, Col de Mente and dipping a toe into Spain with a climb up to the Col du Portillion before a final descent into Bagneres-de-Luchon. 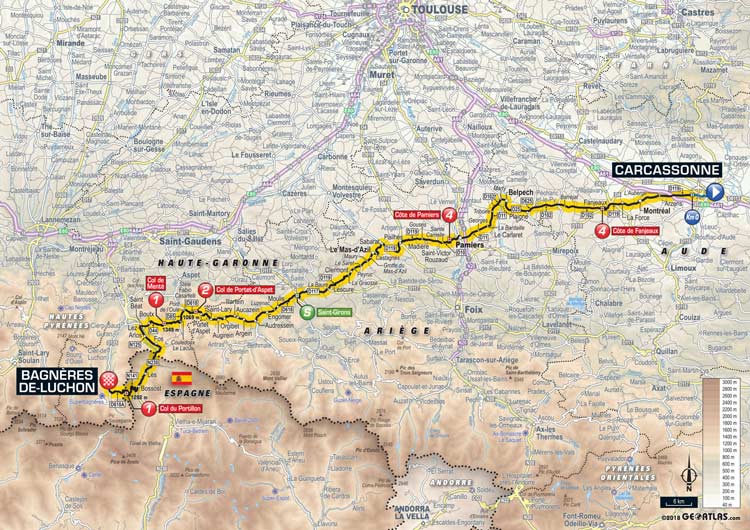 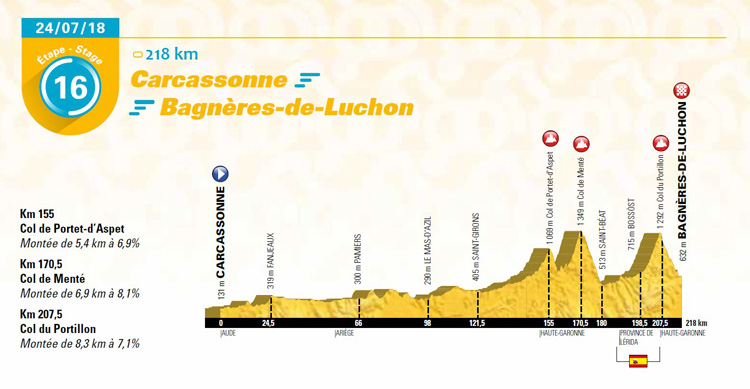 An explosive stage, with Col du Peyresourde, Col de Val Louron-Azet and a mountain-top finish on Col de Portet, a high mountain pass sitting at 2215m, higher than the Tourmalet. The road is really narrow too. 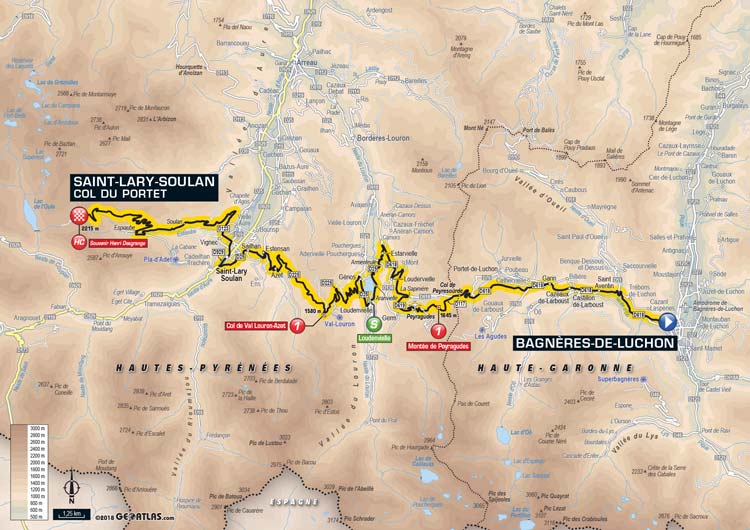 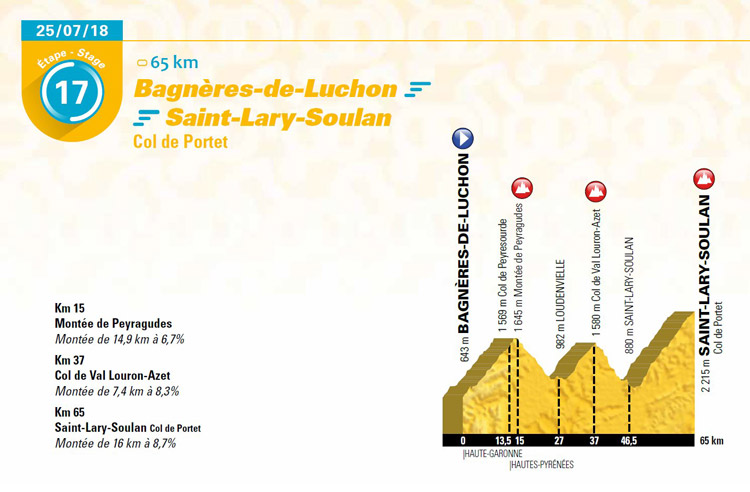 Some respite at last for the sprinters, but it does not last long. 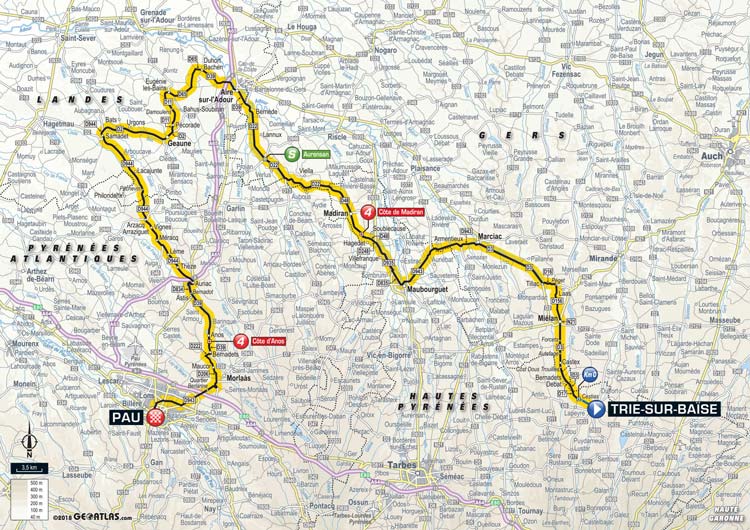 A monster day in the mountains with the Col d'Aspin, Col du Tourmalet and the Col d'Aubisque giving the pure climbers one last chance before the final time trial. 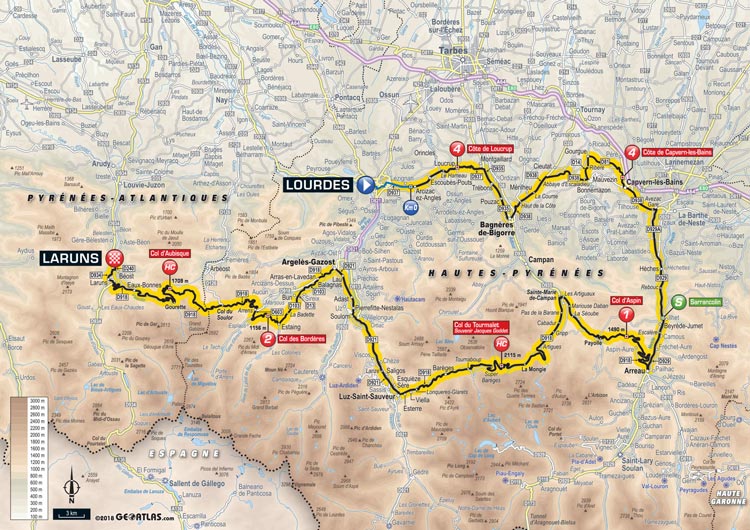 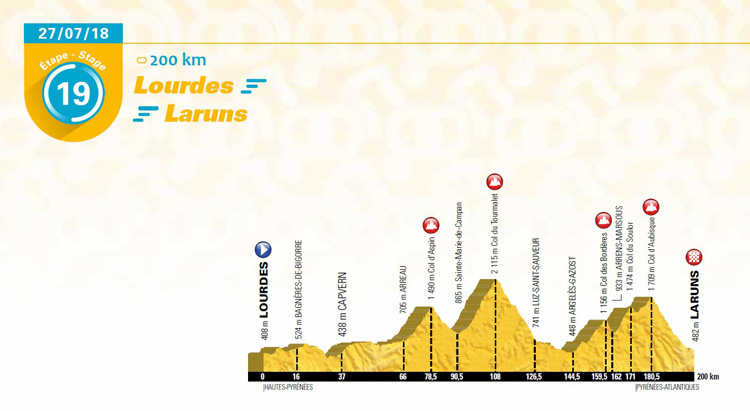 The second time trial finishes in the Basque town of Esplette, famous for its red peppers used in Basque cuisine. The time trial is a lumpy one, including a 10.2% climb for 1km towards the end. It's a perfect stage for Peter Sagan or Michael Matthews. 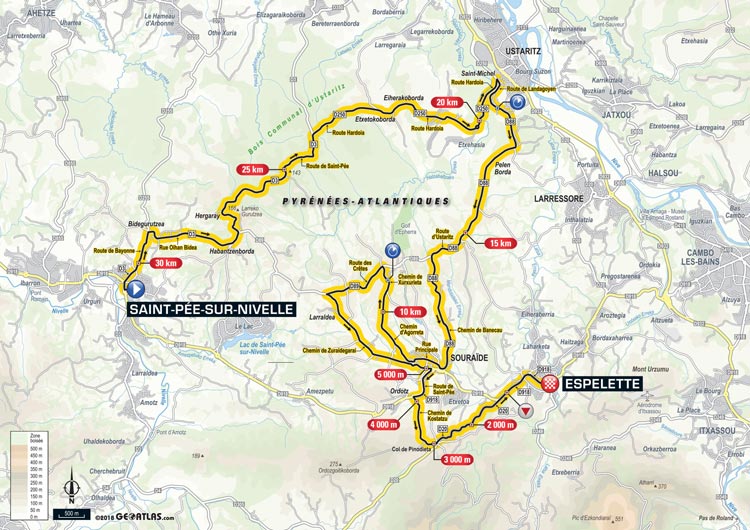 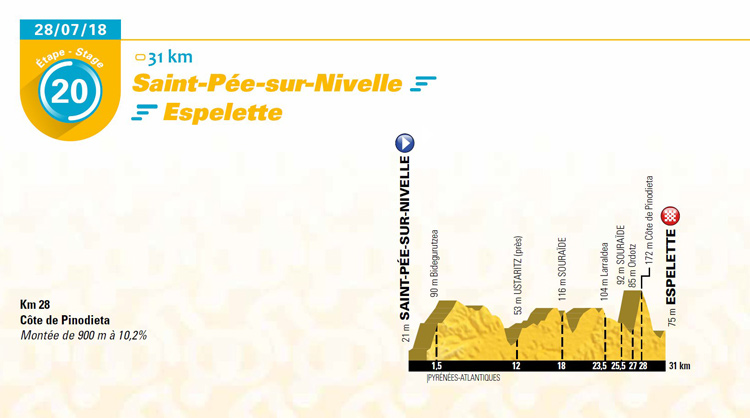 The race finale. The winner of this year's race will have earned it after climbing, taking on cobbles and time trialling their way around this beautiful country. See here for our tips for watching the Tour de France in Paris. 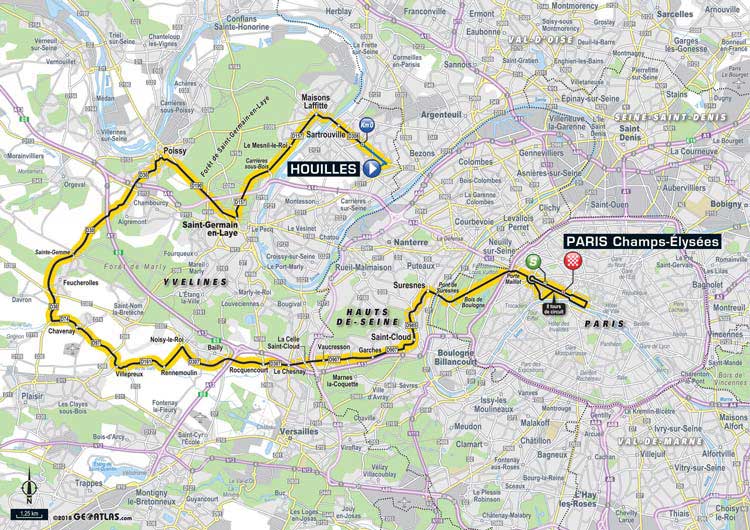 See here for accommodation on the route