It's the biggest annual spectator event in the world. Here's where the 2017 Tour de France will go. 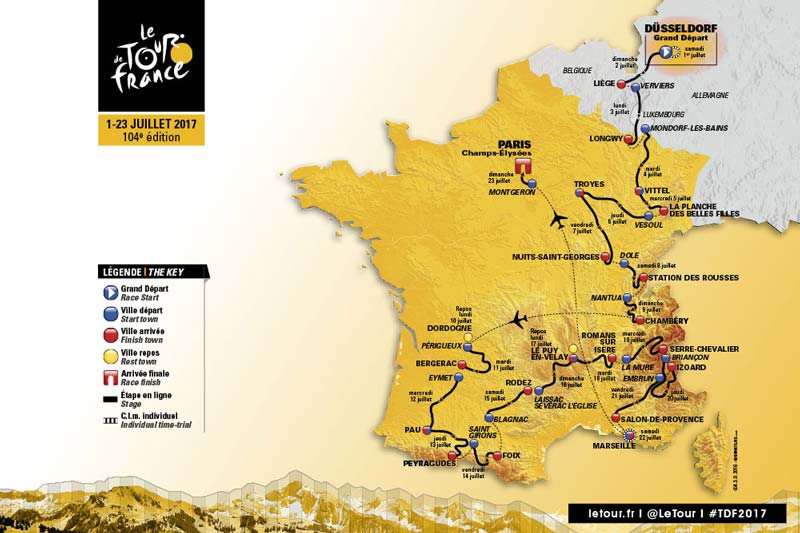 The 2017 Tour de France goes through 34 departments of France, plus it visits Germany, Belgium and Luxembourg, making it a truly international event once again.

The 104th Tour de France run July 1-23. There won't be as many climbs as in 2016 but there are some tough gradients. Allround riders like Sagan should do well.

Five mountain ranges are featured: the Vosges, the Jura, the Pyrenees, the Central Massif and the Alps. It's the first Tour de France since 1992 that all five major ranges are on the route.

There are two individual time trials: one in Düsseldorf for the Grand Depart to open the Tour and another on the penultimate stage in Marseille. 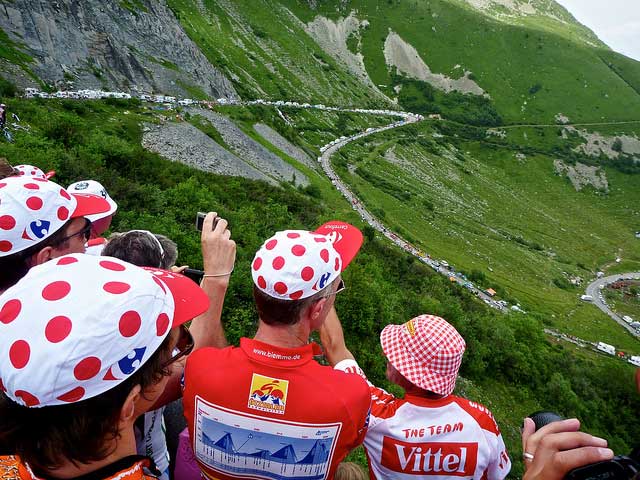 Waiting for the Tour. Photo: will_cyclist

There is a major change to La Course, the women's event that has been run in Paris on the final day of the Tour de France for the last two years. The 2017 edition won't be in Paris but it will instead tackle the Izoard on the same day as the Tour de France.

For reasons I can only imagine come down to time constraints, however, La Course only covers the final 67 kilometres of the Briançon to the Izoard stage on July 20. Bizarrely, that makes the amateur Etape du Tour event – set to run over the same stage on July 16 – longer and tougher than the pro women's race. Strange way to promote women's cycling.

(Every stage is also mapped in the Official Race Guide). 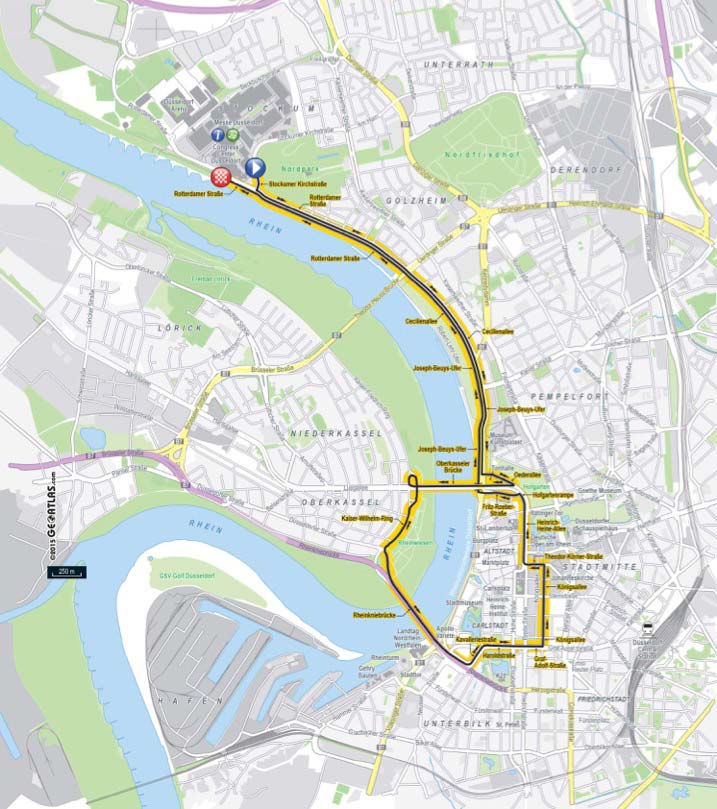 The Grand Départ for the Tour de France will take place in Düsseldorf, a vibrant German city on the Rhine. 2017 marks 30 years since the 1987 Grand Départ was held in Berlin.

Düsseldorf has a funky mix of old and new architecture and makes an interesting destination, with diverse attractions and bustling nightlife. You can find more information here, including maps, tourist advice and a dedicated Grand Depart section.

Düsseldorf is also making huge efforts to promote cycling as a fast and green method of transport. The city is in the process of creating a 300-kilometre-long cycle path network and you can find a handy pdf map here in English.

Dusseldorf will host the Team presentation on Friday, June 31, followed by stages 1 and 2. 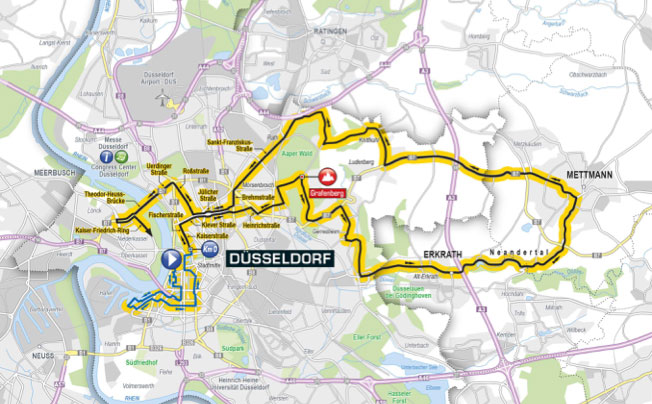 The Tour will leave Düsseldorf, passing along its harbour en route out of the city. 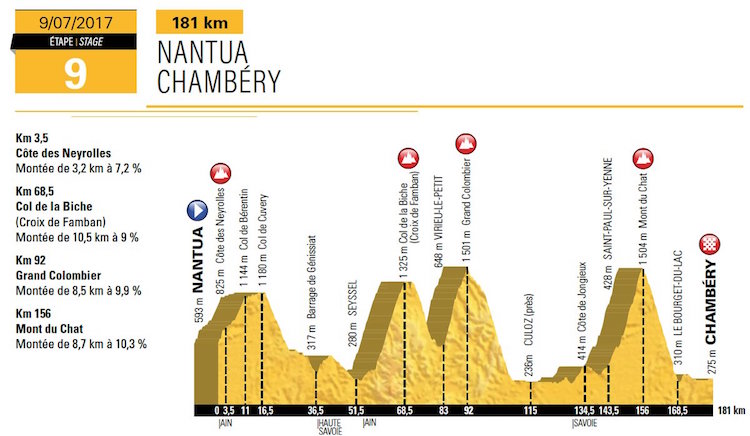 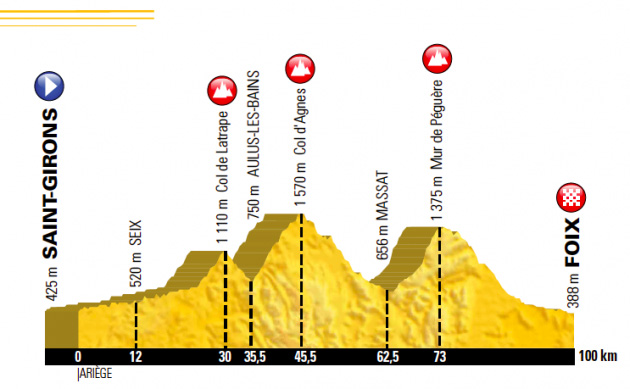 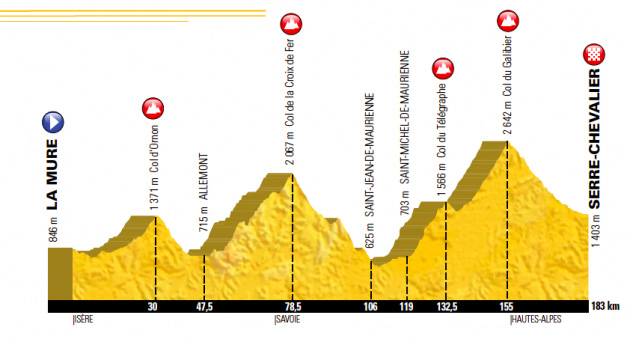 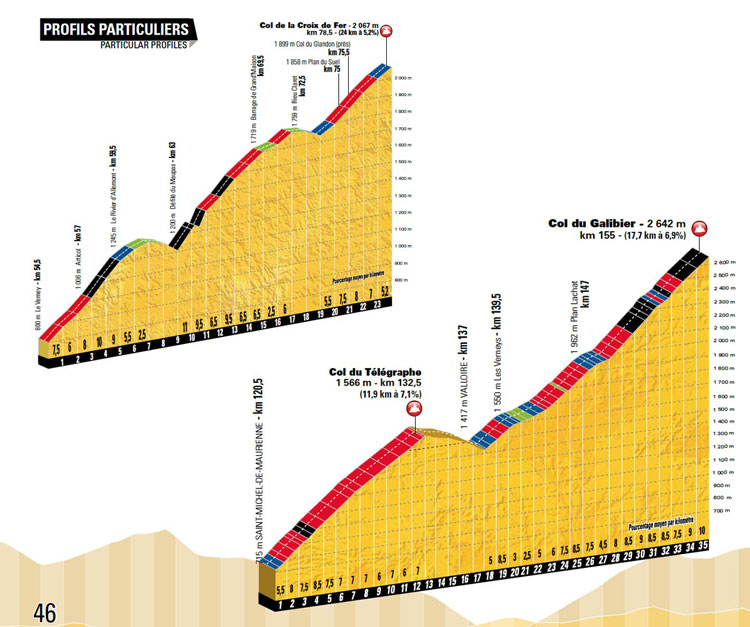 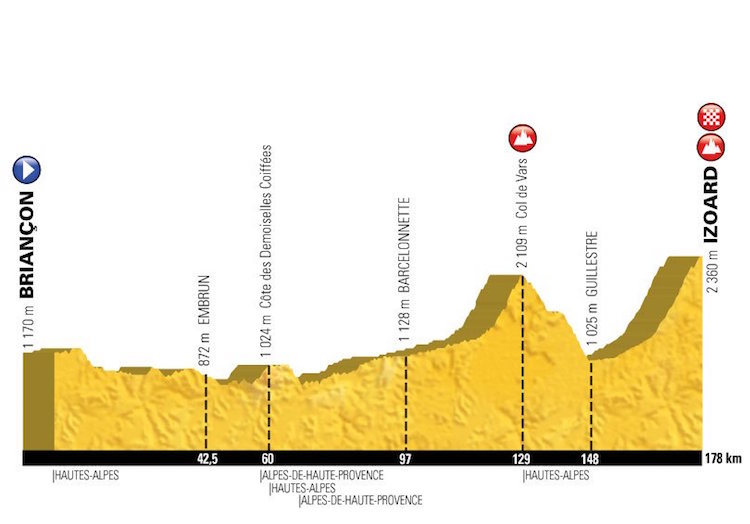 We're adding accommodation that's within reach of the route (generally 50km, but sometimes a little more) to this page. (Or you could zoom in and search the map below).

See our bike hire section. We can't stress enough how you need to BOOK EARLY if you need hire a quality road bike near the route, especially in the mountains. It gets booked out quickly. You can use our bespoke service if you get stuck.

See this page for organised rides and supported packages that take care of your accommodation and bike hire (you'll usually get to ride a stage or part of a stage, plus the chance to be roadside). Again, you can use our bespoke service if you get stuck and can't find a tour that sutis you.

This is really important - we get more enquiries about road closures than anything else in the week before the Tour. We post road closure info here as it comes to hand (there is lots of other general advice on that page too).

See here for ferry info if you're crossing the Channel from the UK with your bike.
We have French bike/train information plus this page for the Eurostar.
See here for driving in France info.