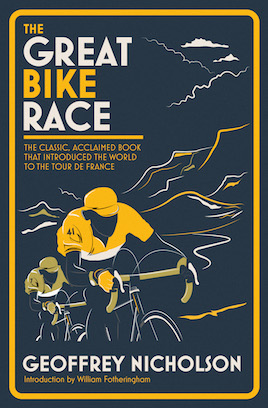 Can you remember when you discovered the Tour de France?

In my case it was July 1947 and a copy of World Sports magazine. The hunger caused by the article on the Tour was further fuelled by French sports magazines sent from a French pen friend. This ignited my enthusiasm, but it was almost impossible to discover more about this elusive subject. Coverage in the sports pages of daily newspapers was sparse and other avenues of information proved difficult to follow.

For those avidly seeking any informed literature about La Grande Boucle, the publication of Geoffrey Nicholson’s The Great Bike Race in 1977 was just what we were looking for.

Suddenly, a practical, lucid and authoritative explanation of what the Tour was about was available in English. Now, to mark the 40th anniversary of its publication, this classic has been reissued and, I’m pleased to say, it has more than stood the test of time.

Following a deceptively simple format, Nicholson – a sports journalist with the Observer – turned his experience of the 1976 Tour de France into what would become a seminal book on the sport.

The Great Bike Race takes the race day by day from the start in Saint-Jean-de-Monts, charts its progress through northern France, on to eastern France and the Alps, on to the Pyrenees and to the finish in Paris. Meanwhile, in alternate chapters Nicholson tells the story of the Tour, explaining how it developed its character, how it is run and how it has dealt with scandals and success.

Throughout, the writing is so skilful that the reader feels part of the vast caravan which accompanies the Tour on its journey. We learn about the riders, about the teams, about the route and the daily stages, about the struggles and rivalries of the individuals taking part.

The Great Bike Race was already one of the finest books ever written about the Tour de France. This new edition, beautifully produced with an inspiring introduction by William Fotheringham and illustrated with 16 pages of photographs from the 1976 race, will only further enhance that reputation.

The Great Bike Race (2016) by Geoffrey Nicholson is published by Velodrome Publishing.

OUR REVIEWER
Peter Stickland was born in Windsor in 1933. Thanks to the French sports magazines Miroir Sprint and But et Club sent to him by his penfriend from Luneville, Lorraine as the Tour de France resumed in 1947, he developed a passion for cycling. While that passion never tempted him to become a cyclist himself, he remains an avid fan of the sport.