Julia Stagg reviews The Foundling Boy, Michel Déon's beautiful tale of a young boy's adventures in France, many of them by bicycle. 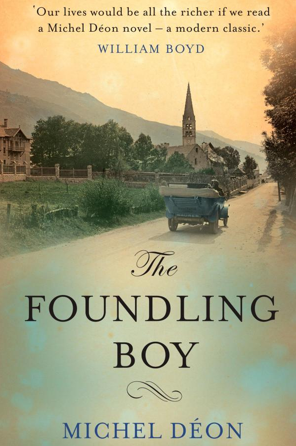 I have to raise a hand here and admit that I’d never heard of Michel Déon before a copy of the The Foundling Boy (UK, US, Fr) found its way onto my desk. I should have, given that he’s won just about every major literary prize France has to offer and is one of ‘les immortels’ in L’Académie Française, the institute which oversees all things pertaining to French language and literature. But can he tell a good tale, I hear you ask. Yes. If this book is anything to go by, he really can.

Set in France in the inter-war period, it follows the life of the boy in the title, Jean Arnaud, who is abandoned at birth in 1919 outside the cottage of a childless couple. His youthful passion for his bike, for a local girl, for the Normandy countryside where he grows up, fills the first section of the book which is redolent with summer and the carefree days of the young. Which could be cloying, if it weren’t for the narratorial voice that intercepts with good-natured cynicism and frequently abandons the story of the youthful hero to follow that of other characters he has met along the way. It is in this respect that Déon’s work is set apart from a workaday tale of a workaday protagonist.

As Jean matures and his interest in the world expands, so does his desire to travel. He journeys to London on his bike and when he survives the experience, sets out for Italy. For me, this was the highlight of the book; the description of Jean’s ride through France in the company of a young German boy of the same age at a point where war is looming, is beautifully portrayed.

Given the meandering nature of The Foundling Boy, it’s no surprise that the novel ends without a definite conclusion. Because conclusions are not what this book is about. It’s a warm, engaging, delightful read. And for those of us who frequent this website, the fact that it also touches upon cycling is an added bonus. Try it. It will leave you wanting more. Luckily, the good people at Gallic Books are in the process of translating the next one.

The Foundling Boy (UK, US, Fr) by Michel Déon was originally published in French as Le Jeune Homme Vert. The English translation by Julian Evans is out now (Gallic Books).