Julia Stagg says there are no more shades of grey after reading Chris Froome's autobiography, The Climb. 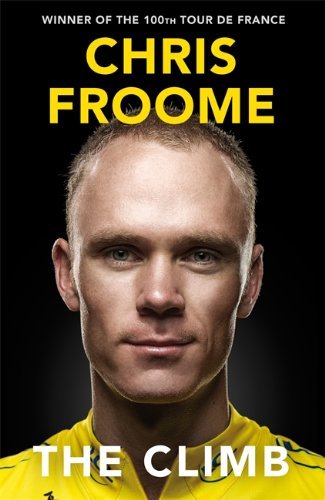 In a world of vibrant lycra, if I had been asked to assign a colour to Chris Froome prior to reading his autobiography, it would have been grey. In interviews, on the bike, he so often comes across as monochrome, which is hardly surprising as so much of his short time in the limelight he has been in the umbra of the more flamboyant Bradley Wiggins.

For me, The Climb has changed all that.

Ironically it starts with the endpapers, those normally wasted bits of space between hardback cover and the first and last page. No waste here. The book explodes with an art deco take on cyclists riding across the Maasai Mara by artist Mark Fairhurst. Flip to the back and there’s a stunning illustration of the Sky team riding to victory under the Arc de Triomphe. And in between? Chapters and chapters of colour.

Froome’s formative years, spent in Kenya and South Africa, burst from the page in vivid prose. No turgid wading through endless accounts of junior racing, waiting to get to the ‘good stuff’; Froome’s childhood and adolescence are worth a book to themselves. His cycling mentor, Kinjah, his pet pythons, his unorthodox route into cycling, his trials and tribulations with the Kenyan cycling authorities.

It all makes fantastic reading.

In fact, the section on the 2006 Melbourne Commonwealth Games and Froome’s enforced participation in the mountain bike race is so fantastic it’s hardly credible.

Then we get to the meat of the story. His arrival in Europe. The difficulties Froome faces getting into a pro-team. And always, those mishaps to which he is so prone, this Calamity Chris of the cycling world who so often seems to be bumbling innocently from one disaster to another.

He recounts his gruelling rise through the ranks with candour and wit, delivering lines such as ‘The meek shall inherit the broom wagon’ and dealing with his sport’s shady past, which is always present, with honesty and openness.

Which brings us to the Sky era. His arrival to that newly formed team. To a partnership with Bradley Wiggins. In style with the earlier chapters, Froome doesn’t hold back. He tells his version of events in the 2011 Vuelta, gives a clear sense of the grievances he carried after the 2012 Tour and deals with his relationship with Wiggins in his usual way; openly and fairly.

But perhaps, for the cycling fan who tires of this relentless rivalry which seemed to rob the Tour de France of something special this year, it is his account of life in Team Sky which is most interesting.

Far from the well-honed machine that Wiggins depicts in My Time, instead, Froome shows the human side of this behemoth of British cycling. The frailties, the mistakes, the sense that even the men in white coats with their stopwatches and machines can’t fully control the sport that is cycling.

To paraphrase Froome’s victory speech on the podium in Paris in 2013, this is one sporting biography that will stand the test of time.

The Climb by Chris Froome published by Viking (UK link, US link)

Julia Stagg writes fiction set in the Ariège region of the French Pyrenees, an area she discovered through her passion for cycling. Her latest novel, A Fête to Remember, is available now, published by Hodder and Stoughton. You can find her on Facebook and @juliastagg