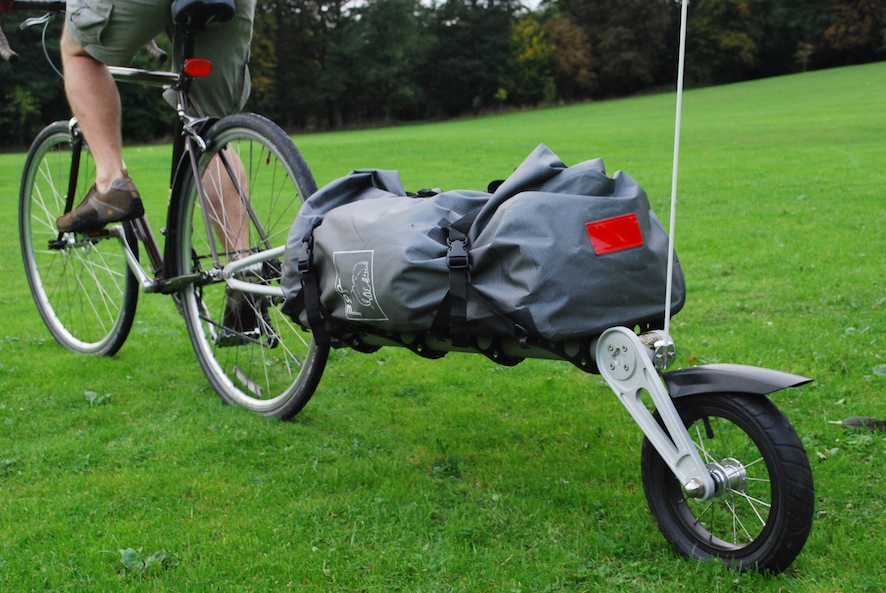 What is it and who is it for?

Single wheel trailers are relatively rare but they have found favour in particular with riders who want to throw in some singletrack riding on tour. Here they are less likely to snag or tip on tight turns or simply to get stuck on very rocky terrain. And if you have a full suspension mountain bike your options for fitting panniers are rather limited and a single wheel trailer might just fit the bill. In urban conditions single-wheelers will also slip through off-road 'pinch-points' and access controls where double wheeled trailers may not. And if you are touring with a lot of gear, trailers add capacity once panniers are full.

Enter the T2 singlewheel trailer, a lightweight Taiwanese design (5.5kg) that allows you to pull a decent load behind you (there is 70 litres of carrying capacity in the fully waterproof rolltop bag). In particular it looks great for lightweight wilderness cycle camping.

How does it work? 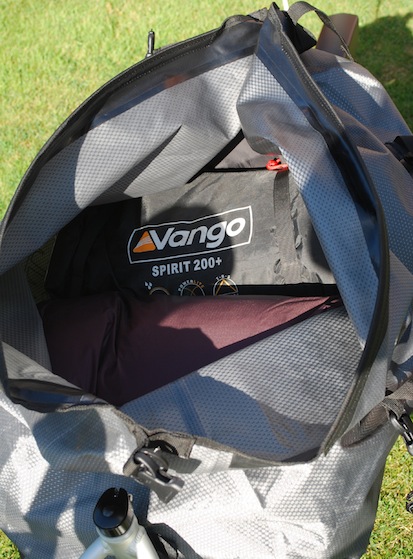 You can clip the trailer on and off the bike thanks to the special fitting that replaces quick release spindles (fittings are also available for Alpine and Rohloff TS hub gears.) However, the bag is pretty easy to clip on and off the aluminium frame and we found this the easiest way to get at all the contents when you need to e.g. pitching tent at the end of the day, only unclipping the trailer when needed.

It's meant for 'standard' size wheels ie 26", 700C and 29ers but I tried it on a 20" wheeled Dahon folder and it worked fine. This design of trailer, attaching to either end of the axle, can affect the handling of bikes, usually when you move the bike from side to side (for example when pedalling strongly or standing out of the pedals) as you are also tilting the load. The light weight of the trailer and load (around 7kg of camping gear) meant this effect wasn't too at all bad on our full sized tourer, but did destabilise the handling of the smaller-wheeled bike (though not dangerously so we felt).

Single wheel trailers come into their own off-road where double wheeled trailers can tip and get stuck easily, especially on singletrack where they can run off the edges of the trail. I found the T2's small rear wheel (used to save weight and for a compact design) didn't cause any problems, and just seemed to skip and hop over most things in its way (no doubt the light but firmly packed camping load helped, rather than having loosely packed items rolling about). 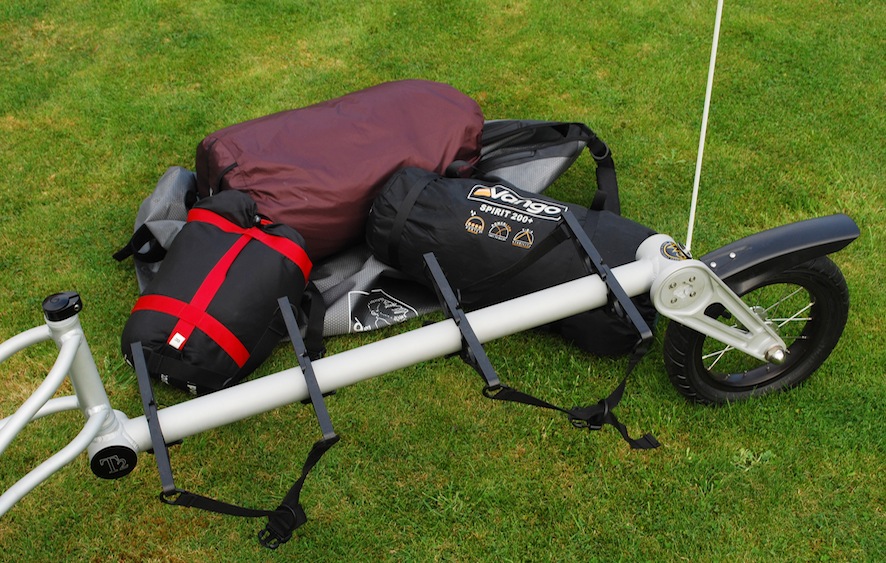 Is it good value and what else is out there?

At £324 it may not look cheap but it is significantly lighter than its most direct competitor, the Bob Yak, and is not dissimilar in price. A cheaper option is the Extrawheel Voyager (£200), though this has slightly less capacity and would struggle to accommodate longer items including some tents. (Tom Allen reviews the Voyager here. He also writes about trailers for touring here.)

The bag hooks tended to detach themselves from the frame when not under tension and so will probably go missing over time (all spares are available though) and it would widen the possible uses if some kind of box option was offered so it could double up for everyday light shopping.

In design terms it would gain a whole new audience if it could be made to dismantle to a smaller and neater size, a detachable front yoke meaning you could probably shoehorn your gear and the projecting trailer elements into the bag, leaving it attached to the aluminium tube; much easier to hop on and off trains with.

These are niggles though; this is a fine little trailer that could expand many cyclists' touring capabilities.

Richad Peace is a cycling journalist who writes for, among others, BikeRadar. He is author of Cycling Northern France and co-author of the Avenue Verte: London to Paris by Bike (UK, US) guidebook, published by Sustrans.