Review: On the Road Bike by Ned Boulting

ITV cycling correspondent Ned Boulting follows his first book, How I Won the Yellow Jumper, with another cracker – an exploration of cycling culture in Britain today. 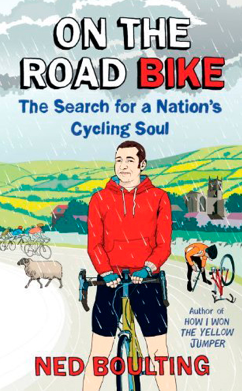 I've cheated a little bit in sneaking this book on to Freewheeling France, a website dedicated to cycling in France – not cycling in Britain. But that's exactly what On the Road Bike: The Search for a Nation's Cycling Soul (UK, US) is all about: British cycling. So apologies in advance to those of you out there who have absolutely no interest in British cycling. My excuses, however, include the fact that the book opens at the Tour de France, with Bradley Wiggins standing on the podium and threatening to draw the raffle numbers. It also (albeit sporadically) dips back into France while tracing the origins of British cycling and the lives of the riders who made the foray across the Channel in the years before British cycling was bathed in Sky blue cash.

On the Road Bike is Ned Boulting's second bike book; it follows the wonderful How I Won the Yellow Jumper – you can read our review and our interview with Boulting. As with Yellow Jumper, On the Road Bike sees Boulting underplay his cycling knowledge and build the title around his apparent ignorance of British cycling, just as he built his first outing around his apparent ignorance of the Tour. However, it's hard to believe that someone who knows so little could produce a book that says so much, with its nuances and its subtle observations providing an everyman's view of a nation's newfound obsession with cycling.

Using a British Cycling Hall of Fame dinner as his spark, he journeys across Britain with his bike (not always in one piece; look out for the dreaded roof-top incident – hilariously re-told, but probably not as funny the first time round). En route he talks to the cyclists who paved the way for today's stars, those who lived and breathed cycling before it became cool; those who still live and breathe cycling, and who are still playing (largely anonymous) supporting roles. He also manages to tackle the Bec Hill Climb, visits Herne Hill, conquers Alpe d'Huez (sort of) and finds himself on the mythical New Romantics Ride with a lot of people who aren't Gary Kemp.

Despite his modesty, Boulting uses his star power to pack the punches. He rides with Chris Boardman, he gets some great quotes from Ken Livingstone, he rides a time trial lap at the Tour of Britain, he uses the Team Sky credit card to go off in search of Champagne to celebrate Bradley Wiggins' Yellow Jersey triumph. Boulting, despite his reluctance, isn't just a bystander, but a player. The honesty with which he critques Rapha and questions whether the middle class/City obsession with cycling has taken it to the masses or further away from the grassroots is not the work of an author unsure of his place or concerned about any backlash from within the cycling establishment.

Combine this sense of purpose with an understanding of how a person can derive such simple pleasure from riding a bike, and you're on the right track. Combine both with good storytelling, excellent writing and a wicked sense of humour, and you get something rather quite special – you get this.

On the Road Bike: The Search for a Nation's Cycling Soul (UK, US) is out now. How I Won the Yellow Jumper is also still available and is highly recommended for anyone with even a passing interest in the Tour de France.