We stayed at the Pierre & Vacances Haguna apartment-hotel during a recent visit to Biarritz. Here’s what we found when we arrived. Review by Lyn. 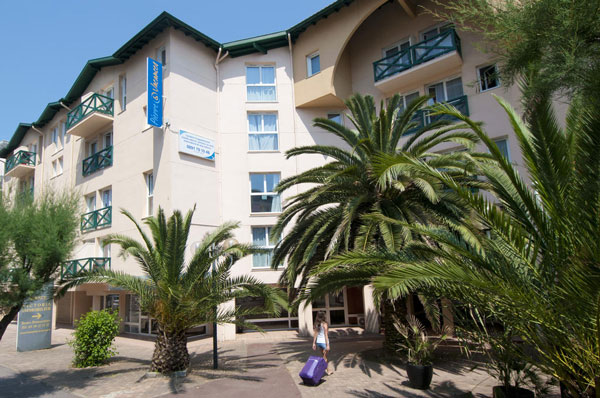 We paid €128 (mid-March) here for a studio apartment with a sofa bed for the kids for two nights (Friday and Saturday). It understandably gets more expensive during summer, when the beaches are heaving and there is a steady flow of cyclists making their way along La Velodysee route. It may become harder to secure shorter stays when week-long bookings are the norm, but the facilities and location here do make it an ideal base for cyclists – especially families and groups wanting some flexibility with catering options.

The hotel had everything we needed for a two-night stay and we’d have happily stayed here longer. The kitchenette was fully stocked with crockery, cutlery and enough pots and pans to cook a feast had we not already earmarked a local creperie for dinner. Even so, the kitchenette saved us €€€ on breakfast and meant cups of tea on demand. There was also a Nespresso coffee machine (capsules can be bought at reception, but bring your own if you can as they are a bit pricey). 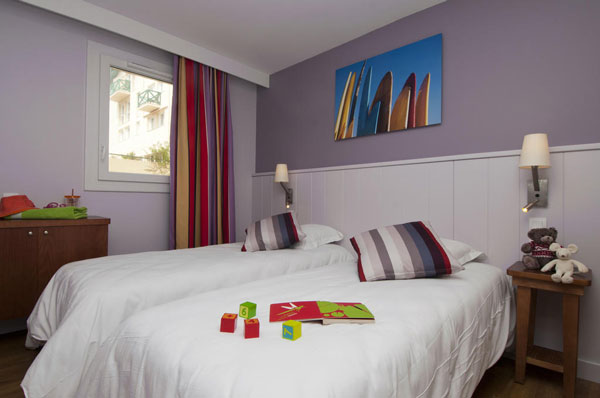 Elsewhere in the hotel there is a breakfast room in case you don’t want to sort yourself out, plus there’s a kids’ play area near reception with books and toys, and a small outdoor play area as well.

Wifi is fast and free throughout the hotel.

Faultless. We could have eaten off the table and the bathroom was also spotless (great shower!) The bed linen and pillows were crisp and white and the sofa bed was already made up or the kids (plenty of extra pillows and blankets). There was dishwasher (complete with a starter box of cleaning supplies that included dishwater tablets, liquid soap and tea towel). 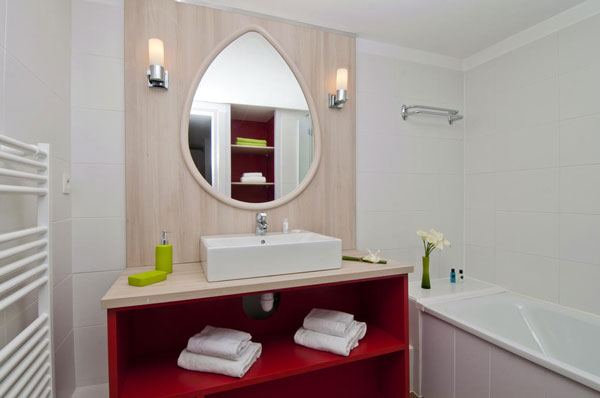 We were in town for a local group ride, and while the bike would have been safe locked in the in car in the secure/private underground car park overnight, we still wanted to take it inside with us. The hotel has a dedicated bike storage room (with coded access), but staff will also let you take your bike with you to your room (which we did).  Secure bike storage is standard at all Pierre & Vacances properties across France.

The hotel is very central. While not on the beach, it is within easy walking distance of all the main attractions as well as restaurants and bars. There’s a boulangerie around the corner with a great selection, plus a Carrefour mini-market nearby for basic groceries, and a very tempting fromagerie.

Biarritz is a popular stop on the EuroVelo (EV) 1 La Velodysee route. The city is also circled by a plethora of other marked routes. We did an 80km circular route that – with the exception of a section through an industrial centre on the ride out of town – was almost entirely on dedicated bike paths. The new EV3 Pilgrims’ route also passes through Biarritz.

Off the bike, there’s loads to do here around the water, with some of France’s best beaches and an aquarium and ocean world for families. There are also dozens of great restaurants (including quite a few Michelin stars), with the fruits of the sea and Basque culture heavily flavouring the menus.

Biarritz lives up to its reputation as one of the country’s leading holiday resorts. Sun, surf, good times – and good cycling – are guaranteed along this stretch of the Basque coast.

Plot your accommodation on the EV1(La Velodysee) and EV3 (Pilgrims’ route) on our map.