He was The Cannibal. Lawrie Jones is blown away by Merckx 69. 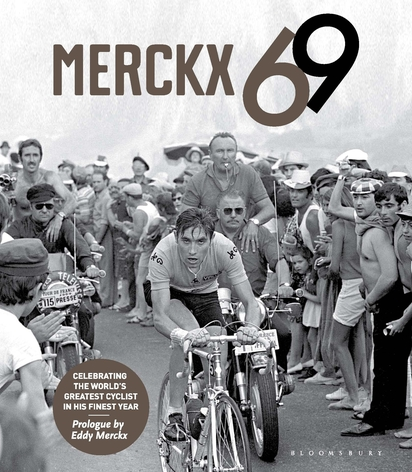 Merckx. The name itself needs no introduction, no context and no explanation. Even my father, a man whose knowledge of the rich history of cycling doesn’t extend much beyond Armstrong and drugs, knows the greatest cyclist of all time.

As the man – the legend – turns 69 this year, Bloomsbury has published Merck 69, a wonderful celebration of undoubtedly his most incredible year, and arguably the greatest season any cyclist has ever had.

Given the sheer number of Merckx books – William Fotheringham’s comprehensive and accessible Half Man, Half Bike the best of them – there’s not much more that can be said about the man’s history.

Thankfully, Merckx 69 doesn’t try. This beautifully presented book is based around the incredible photography of Tonny Stouken and the personal, almost poetic, reminisces of Jan Maes, a long-term friend of Merckx.

The milestone races of Merckx’s season – given his voracious appetite for success there were many more – are introduced by Maes’ letters. Translated from the original Belgian edition, the letters are heartfelt, gentle and philosophical, providing a highly personal context that makes this book stand out.

The rest are Stouken’s pictures. But what pictures.

We see Merckx throughout the season, from being victorious in a number of Spring classics to his utter domination of the Tour de France. We see him receiving a hero's welcome in Brussels, being met by the King of Belgium – another inspired by and in awe of Merckx.

In many we see Merckx, 24 years old but already the king of the peloton, beautifully poised on his bike. On his bike Merckx often wears the same fixed expression – both determined and insouciant – each success dragging him closer to perfection, but youthful enough not to understand quite how momentous this year would be.

But we also get to see the human side of Merckx. We see him slumped on his bed as he’s unceremoniously expelled from the Giro d’Italia after failing a doping test. We seem him in what must have been a rare moment with his wife and the  aftermath of his crash on the track at some forgettable race meet unworthy of his time.

But that was the man, a man who strove for the best. And, with this exquisite publication, he’s got a fitting tribute.

Merckx completists will already be clearing a space for this on their shelf but, given its size, they may need to invest in some new ones. If they do they will also need to be pretty strong as the hardback book itself weighs in at almost 2kg, similar to the weight of Merckx’s handmade wheels and tubular tyres.

For me, the book now has pride of place on my coffee table, a mark of good taste and one of indulgence.

Stopping by one afternoon, my father spotted the book, picked it up and began to leaf through it. The turn of each page resulted in another warm expression and knowing nod. The bikes, the cars, the people and Merckx himself evoking many memories in a man old enough to have lived through the period.

After an hour of silent contemplation, he’d finished. Placing the book carefully back onto the coffee table, he looked at me and nodded. He didn’t need to say anything. What could he say? It’s Merckx.

Merckx 69 is available online from Stanfords.