Richard Peace reviews the Hotel de l’Univers in Arras in the Somme, where he stayed while cycling from Lille to Paris. 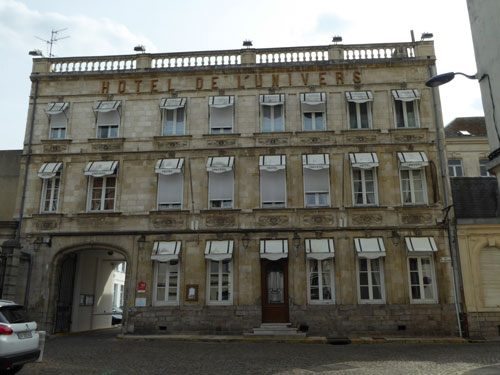 The Hotel de l’Univers was a one-night stay on my Lille to Paris bike route and proved an extremely classy and efficient hotel a little less than 40 miles /64km along the route. It was a great introduction to this relatively little explored area of northern France.

Hotel de l’Univers also offers a touch of luxury on the Véloroute de la Mémoire (Arras to Amiens) route for anyone exploring the battlefields of the Somme. See also our Somme Valley Bike Route overview.

Five things we like about Hotel de l’Univers, Arras

1. Secure bike storage: This is first on the list as it is probably top of most cyclists’ lists too as a basic requirement for an overnight stop. There were several storage and function rooms at ground floor level and the receptionist inspected a couple and decided on a roomy storage area for our two bikes, along with the spare artworks and some chairs! Although there weren’t particular lock up points we were assured the bikes would be quite safe behind the locked door of the room and we also noted that the hotel courtyard was locked at night, providing a very reassuring level of security. 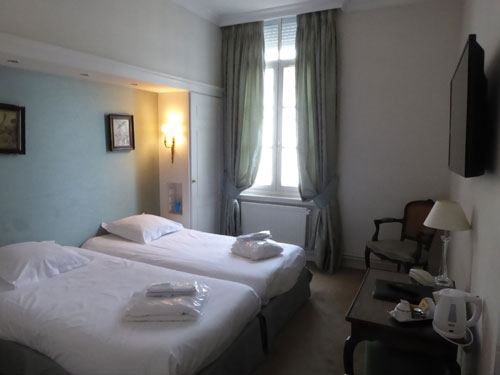 2. The history: Much of central Arras has some very old looking buildings and the Hotel de L’Univers is no exception, starting life as a 17th century Jesuit monastery. I was lucky enough to get a room overlooking the central cloister area; the imposing facade is best described as being typical French ‘shabby chic’ but once through the gateway the atmosphere is transformed by the much smarter cobbled cloister area.

The feeling of stepping back in time was also reinforced by the period-style décor of the room, with French antique style furniture and lush velvet curtains. The room wasn’t massive but fine for our limited luggage – apparently bigger rooms are available, so if you need or want lots of space spread out do request a larger room.

It was well-equipped with an en-suite bath and shower and the all-important kettle and hot drinks selection plus free wifi access (though this occasionally cut out – again request a room with a good strong signal if wifi access is very important).

3. The breakfast: A self-service breakfast providing a wide-ranging choice of bread, pastries, meat, cheese, fruit, yoghurts, bacon, scrambled or boiled eggs and more, plus regular top ups of coffee. The breakfast room faces onto the lovely courtyard too so you can get a window seat and feel you are really eating in style.

Sadly our budget was not up an evening meal, but the extremely elegant looking restaurant gets great reviews. 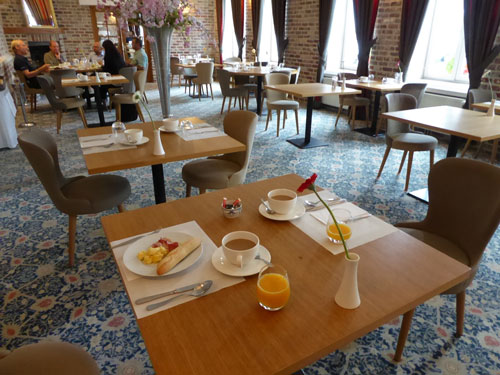 4. The location: It’s a five-minute walk to the breathtaking Place des Heros, the centre of cafe life in Arras. It’s traffic-free, lined with magnificent Flemish buildings and a great place to chill at a cafe table. There’s also the helpful tourist information office here.

5. The James Bond Factor:  I loved being able to wheel the bike out of storage and lean it up next to a Ferrari to load up the panniers for the next day’s travelling, showing that humble cyclists can experience the international jet set lifestyle too.

The whole hotel has that aura of well-heeled international luxury which I only occasionally get to sample.

I wouldn’t have been surprised to see a 1960s dinner-suited Sean Connery heading along one of the elegant corridors here. 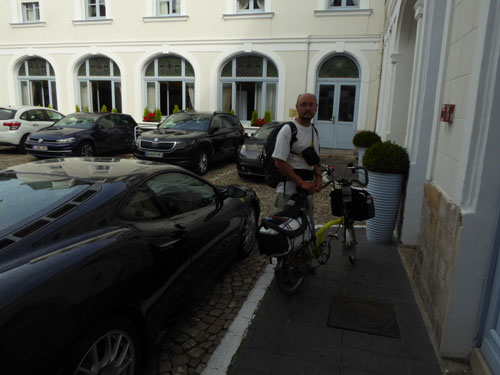 The Hotel de l’Univers is one of the Najeti chain of hotels that are pretty versatile, catering for those who like to play golf and drive fast cars, but it is also happily caters for cyclists too.