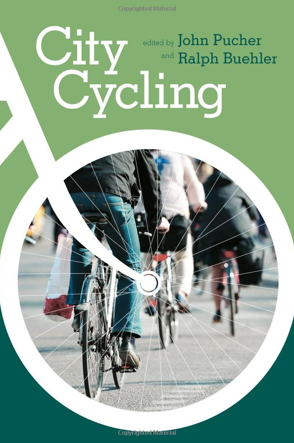 “A bicycle path is a social statement that a person with a $40 bicycle is as important as anyone with a  $40,000 car.”  Enrique Peñalosa, former mayor of Bogotá, Colombia (quoted on p. 42)

The one thing missing from the exquisite Tour de France broadcasts every year is the slightest mention of purposeful cycling: the bicycle as a form of transportation. City Cycling focuses on the worldwide trend where the bicycle is becoming a viable mode of transport: healthier, more enjoyable and more efficient than the automobile.

When the municipality of Paris initiated its policy of redistributing public space to be more equitable for cyclists, the opposition countered that “Paris is not Amsterdam,” as if a forgotten bicycle culture had no chance of being restored. City Cycling refers to France as one of those countries that has been actively reviving the bicycling culture since the year 2000.

In my blog about bicycle culture in Paris for Freewheeling France, I wrote that “in the ten years that I’ve been commuting [by bicycle in Paris] I have seen increasing numbers of oldtimers cycling, more women and more business people.”

It was satisfying to see that my anecdotal evidence has been corroborated empirically in the City Cycling, “Cycling in Megacities: London, Paris, New York and Tokyo”. We learn that women account for 41% of bike trips in Paris, compared to 30% in London, and smaller percentages in New York and Tokyo. Paris and London also lead the standings in percentage of all bike trips for seniors: an extraordinary 8% in Paris and 5% in London.

This is but one example of how City Cycling serves as a practical reference book: “the best single source to date of data on cycling trends and successful strategies,” according to one reviewer. In fact, John Pucher and Ralph Buehler have put together a team of 21 authorities on the subject, all brandishing advanced degrees in order to grab the attention of public policy makers, and to reform a system of town planning that has been dominated by powerful automobile and oil lobbies.

In other words, City Cycling also functions as a strong advocate for policies that would gradually replace automobile use with bicycling and mass transport, for the benefit of public health, citizens’ purchasing power, ecology and urban aesthetics.

Paris serves as an example. According to a percentage-of-trips statistic (page 323), the City of Paris went from only 1% of all trips by bicycle in 2000 to 2.5% in 2010: not a lot compared to Amsterdam but a statistically significant increase. New York lagged far behind, with only 0.6 of all trips by bike in 2009, but that stat came just before New York embarked on the Paris strategy of adding bicycle lanes and protected paths, as well as installing a bike-sharing scheme similar to the Vélib of Paris. London had only 2% of all trips by bike in 2010 while Tokyo led the four-city comparison with 16.5%.

How bicycles can get cities moving

Aside from extensively documenting the health and ecological benefits of a bicycling culture, City Cycling adds the concept of “effective speed” in the Chapter 4 essay by Paul Tranter. Tranter shows why in Melbourne, for example, you would have to cycle only 12.5km per hour to be faster than a car, while in London, you only need to roll at 7.2km per hour to outdo the automobile.

Paris is not included among the 14 cities compared for effective speed, but Tranter’s formula can be applied to Paris with similar results. In Paris, car drivers get stuck in hopeless traffic gridlock, they waste a half hour circling around like starved vultures for a parking space, and they spend a significant percentage of their work time to earn money in order to purchase, feed and service their cars.

Calculating effective speed involves variables of average trip speed, the costs of the mode of transportation, the median income, which determines how much time is devoted to earning the money to pay the costs, as well as other variables. Tranter traces the concept back to several thinkers, especially Ivan Illich in his Energy and Equity (1974). He quotes Illich: “The typical American male devotes 1,600 hours per year to his car. He sits in it while it goes and while it stands idling. He parks it and searches for it. He earns the money to put down on it and to meet the monthly installments. He works to pay for petrol, tolls, insurance, taxes and tickets. He spends four of his sixteen waking hours on the road or gathering his resources for it.  And this time does not take into account other activities dictated by transport … The model American puts in 1,600 hours to get 7,500 miles: less than five miles per hour.”

Tranter follows up on Illich by using contemporary variables to painstakingly calculating the effective speed in today’s cities. It is recognised that the structure of some urban areas simply does not allow for a commuter to do it all by bike. But Chapter 8 of City Cycling, “Integration of Cycling with Public Transportation” offers solutions. In many cities, mass transport has added facilities for bicycle commuters. For bicycle trips that are either too long or contain portions that are too draining, the cyclist can put his bike onto a commuter train or, in some American cities, stick it on the rack of a bus.

There is also the Vélib system of Paris, which City Cycling refers to as a model for other cities. (We should note that other municipalities in France, such as La Rochelle and Lyon, preceded Paris in establishing bike-sharing programs.) With Vélib, commuters from the suburbs needing to do errands within the city no longer have to bring their car to work; they can use a Vélib bike within the city.

But beyond the personal convenience of utilitarian cycling, great societal benefits are achieved when the numbers of cyclers increase. Not only is there increased safety in numbers when you gain a critical mass of regular cyclers but pollution and carbon emissions are reduced accordingly. “With an average of 78,000 trips per day and approximately 20 minutes per trip,” write Shaheen, Guzman and Zhang in “Bikesharing across the Globe” (Chapter 9 p. 199), Vélib users cover an estimated 312,000km per day. A car covering this same distance would have produced approximately 57,720 kg of CO2 per day.”

They add that “Vélo’v in Lyon, France reports that bicycle use replaced 7% of trips that would otherwise have been made by private vehicles.”

City Cycling can be considered a primer in global bicycle geography, with richly complex embroidery of comparisons between urban regions around the world. If you happen to be a bicycle commuter, then consider yourself as one of the characters in this book.

Or, take it a step further and use the information in City Cycling to convince authorities in your town or region to adapt bicycle-friendly measures and to redesign communities to be compact, mixed-use and bikeable. The final chapter, “Promoting Cycling for Daily Travel: Conclusions and Lessons from across the Globe” outlines strategic talking points to back you up.

Since the authors are interested in purposeful or utilitarian cycling, I would suggest a follow-up on the bicycle as a vacationing vehicle, given the increasing popularity of velotourisme. (Here, for instance, is Freewheeling France's advice on how tourism providers can offer cycle friendly accommodation in France.)

City Cycling is a big volume, 393 pages, and there’s no way a reviewer can refer to all the themes covered. Chapters on “Children and Cycling” and “Women and Cycling,” will raise eyebrows. Chapters on policy comparisons between North America and Europe and bicycle safety are also revealing. In cases where the opposite of one valid logic is another valid logic, the authors are nuanced in their approach.

You can see that the 21 contributors to this volume have worked together since they make references to each others’ chapters. Thus, City Cycling is a unified book and not just a series of essays.

City Cycling (US, UK) is edited by John Pucher and Ralph Buehler. It is published by MIT Press (2012).