Richard Peace puts Axiom's 40L Typhoon panniers to the test, and says Ortlieb's long-held superiority at the top of the pannier picking order might be in danger. 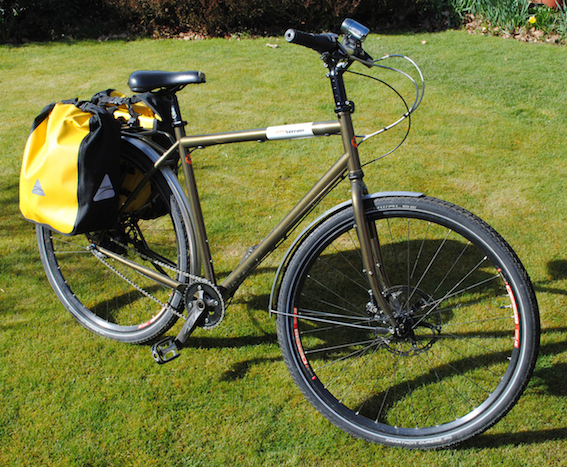 I was attracted to these very simply designed rear panniers by their simple 'roll top' fastenings, with no zips or complicated strapping to bust on you in the middle of your trip? just fill 'em­ up, roll the tops over a couple of times and click the buckles together.

Inevitably comparisons will be made with what have been described as the 'gold standard' of tough waterproof panniers, Ortlieb.

Axiom describe the two-piece fabric design as tarpaulin (that's the tough plasticised yellow front and back that Brits would call PVC, and the black 600D – ie very strong – waterproof polyester). The all-important seam welds (welded in this sense meaning fused together ultrasonically) appear very strong and the all-important waterproof test ­ involving several minutes under a garden hose ­ was also a great success (no need for extra dry bags inside these panniers). 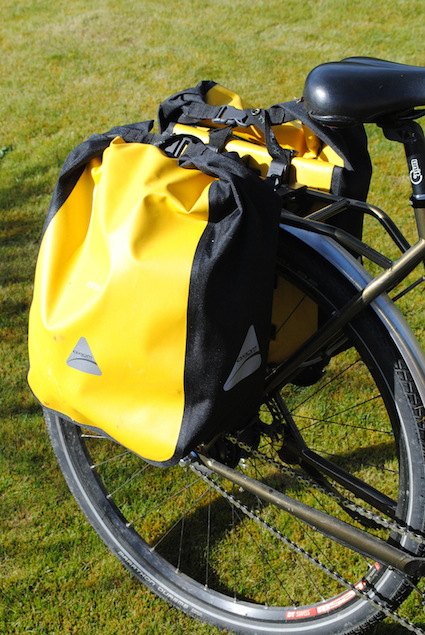 Manufacturers of top­-end touring panniers have tended to develop their designs of mounting to accommodate the varying shapes and tube thicknesses of the plethora of pannier racks out there, and Axiom are no exception. Again Axiom have gone for simplicity, using a system of three hooks pulled together by strong elastic chord. I tried this on three pannier racks and the Vario system of hooking worked on all three contrasting thicknesses of rack (Axiom claim the hooks will fit racks of diameter 6­-20mm).

The system certainly seems to be rather less sophisticated that the Ortleib system, with no lateral movement of the hooks, meaning it may be difficult to align all three hooks – the top two top mounting ones and the tensioning hook on on the elastic bungee. On one rack I couldn't find anywhere to hook to bungee onto and ended up using quick release tie wraps? it worked perfectly fine but meant popping the panniers on and of the bike was not almost instantaneous is it is with the hook.

There is not a great a deal to say about the panniers in use, which is as it should be. The securing latches work well alongside the bungee­-cum­-hook system, meaning the panniers remained solidly anchored to the bike at all times – even off­road – with no discernible movement on the rack.

The excellent securing latch on the Axiom Typhoon Panniers (below). 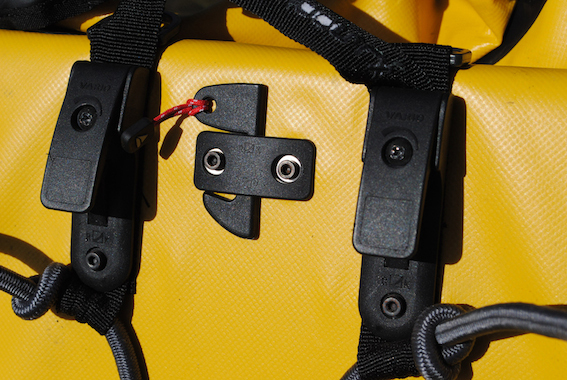 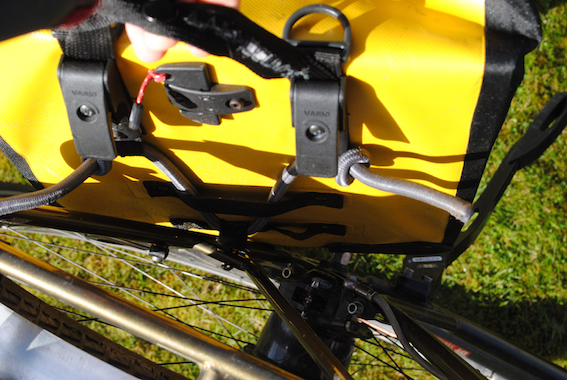 Axiom Typhoon Panniers hook and elastic tensioning system.
Loading and unloading with the roll top clips couldn't have been easier. The panniers come with shoulder straps for easy carrying off the bike.

The only downside of this pannier design is a lack of compartments and pockets for storage, but zips and pockets are really weak points when you are looking for the toughest panniers out there, and this is the accolade Axiom and Ortlieb are fighting for with this kind of design.

So far it might seem the Ortliebs are ahead in the value-for-money stakes, with a similar price and greater flexibility of mounting. However, Axiom have an ace up their sleeve in the form of a lifetime guarantee as against Ortlieb's five-year offering. In my book, knowing that you have a great set of panniers for life makes these look a tremendous deal.

More pannier and bag reviews on our site