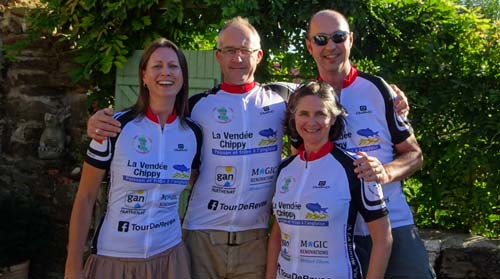 As I type, one of our regular contributors, Jacqui Brown, is en route around the Deux-Sèvres department of France as part of a bike ride in aid of a local charity for kids. (You can read about their preparation here on Jacquis blog).

Jacqui and her husband Adrian, who wrote about the Sarthe bike route and the Ardéchoise cyclosportive for us, have joined another couple, Sarah and Rob Berry, for the six-day 435km ride. The charity challenge is in aid of Rêves, a local association that raises money to help make the dreams of seriously ill children and teenagers come true.

While Jacqui and Adrian are regular cyclists (Adrian is the mastermind behind the route-planning), Sarah and Rob are completely new to cycling – this is their first ever bike tour and they had to invest in bikes and kit before even starting their preparations. They prove what we're been telling you for ages here at Freewheeling France – that anyone can enjoy cycling in France, even if you've never done it before.

Sarah can't have children herself, so she chose the Rêves charity to help other people's kids who were going through tough times. Through Rêves, children are able to escape from everyday life to enjoy special moments with their families, giving them strength and confidence to fight against illnesses.

You can donate directly to Rêves here.

The four are riding an average of 85km a day over the six days. Keep an eye out for the guys if you are cycling in these areas of south-west France this week.

We have more on cycling for charity here