Tips for cycling in France - add your tips

This is a page for everyone – a collection of tips we've all picked up cycling in France. 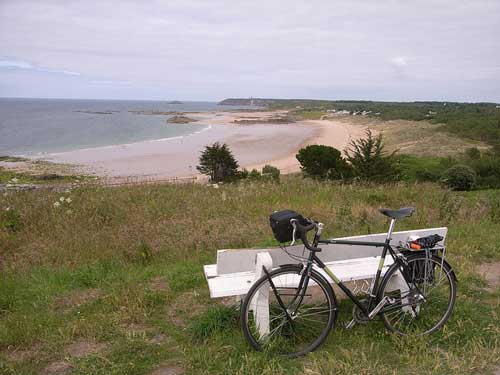 I'm using this page to collate all manner if tips that have drifted in to me from all corners of the world. It's a work in progress and I'm adding to it whenever I have time. It's a chance to pool resources and share tips – no matter how bit or small – that can help others make the most of their cycling holiday in France.

Tyres for bike touring in France

Touring bikes are the best tool for the job, fitted with 700c or 26" wheels and tyres of 32mm width or more. You won't find wider 700c tyres so easy to get in the smaller towns - you'll need a Decathlon store for those. Tony Bennett, Australia

No matter what you do or do not end up taking, it's good to remember that France is well geared up for cycle tourism – even if you do forget something important, you will be able to pick it up en route in larger cities and towns and in the popular cycling areas. Stephen Fox, author of Cycle Touring in France (see Stephen's packing checlist here).

Brittany's Green Ways: A Guide to Re-Used Railway Tracks and Canal Towpaths is an excellent resource for anyone wanting to cycle in Brittany on dedicated bike routes. Peter Andrews, Omaha

David from the US sent these tips for the Canal du Midi.

We spent two days riding in the Tarn-et-Garonne, using the village of Saint-Nicolas-de-la-Grave as our base and another two days in the Minervois hills. Both were detours from our Canal de Garonne and Canal du Midi ride from the Atlantic to the Med. This region of France is laced with quiet back roads perfect for cycle touring. If time permits, detour to Auvillar in the Tarn-et-Garonne and Minerve in Languedoc-Roussillon. Steven Herrick, author of Bordeaux and Bicycles (UK, US, FR)

In any town or village at noon, look out for all the parked white vans. They are all the tradesmen parked at the cheapest and best restaurants in town tucking into a menu du jour set-menu lunch for around €16. Great refuelling for hungry cyclists! Tony Bennett, Australia
(Lyn @ FWF writes: Sometimes they are even cheaper than €16. Long-distance truckies also use these places, so look out for a line of trucks as well).

Storing luggage while cycling in France

There is a luggage store at Charles de Gaulle Airport in Paris for bike boxes and other baggage. Donna's reader Q&A

Bikes and trains in France

All French trains accept bikes if they are dismantled and carried onboard in a bike bag (maximum size 120cm x 90cm), which can be stored in the luggage area. From our French trains page

Maps for cycling in France

Get any Michelin map 1:200,000 and follow the smaller white roads and explore and you'll have a wonderful time. Tony Bennett, Australia

The leisure docks in Brest (Brittany) have been completely rebuilt with a lot of brand new restaurants and cafes. (Ideal for lunch or refreshments). sapindenoel

Insurance for cycling in France

I often get asked for recommendations but am loathe to recommend specific companies as everyone's situation and holiday is different. I've put together this page on travel insurance for cycling in France. It's heavily weighted to the UK, just because we have more readers there than anywhere else and more people send me UK links). Happy to include other companies if anyone has had a good experience from elsewhere in the world. Lyn @ FWF

I've never encountered any problem with being on an electric bike – I've been on French trains and the Eurostar, as well as ferries in much the same way I would with a normal bike. Be aware though, if flying to France (or anywhere else for that matter), you're unlikely to be allowed onto a plane with a large lithium-ion battery, whether it's in the hold or hand luggage, as carriage of the very reactive lithium is strictly regulated by the airline industry. Richard Peace, author of Electric Bicycles: The Complete Guide

I have just completed a solo cycle from Dublin to Barcelona (June 2016) and found your site very useful when making my plans. I would make a few comments that might be useful to your readers
1) Canal du Midi continues to be almost impassable for cyclists. After the joy of Canal du Garonne I (and other cyclists I met) were forced to abandon this part of the journey and go back on to main roads. After any rain fall the track beside the canal becomes a quagmire.
2) There is a EuroVelo route marked on maps (EV8) from south of Perpignan over the Pyrennees into Spain. As an alternative to the very busy D900, it is worth examining. It starts just outside Le Boulou and is well marked along quiet tarmac and concrete roads right up to the Spanish border. However on the Spanish side the signs are a little confusing and the road deteriorates into a very unsuitable track which could be dangerous in wet weather. I would not like to attempt this route going from Spain into France.
3) Google Maps has a cycling option for France and Spain which is very useful. You can download the map for the area each day and it will bring step by step directions even if you have no network coverage. (It uses GPS). However if you leave the route, it goes silent. It cannot recalculate until you are back in wifi or network coverage. Also be aware that the algorithms tend to seek out mountain bike tracks which may be difficult for cyclists with thin tyres. However, despite these limitations it was easily the outstanding app that I used.
Kind regards and thanks for your wonderful site,
Pierce.

Accommodation for cycling in France

There is a special page here for hotels, B&Bs and self-catering accommodation near the Tour de France route.

For guided and self-guided options, see our Organised Tours section. We have a dedicated page here for Tour de France cycling holidays.