This is 11-year-old Felix Leckie. In July, he'll be riding from Newark, Nottinghamshire to Slovenia to raise money for a local kids' charity. He'll be dipping into France en route. Here's his story. 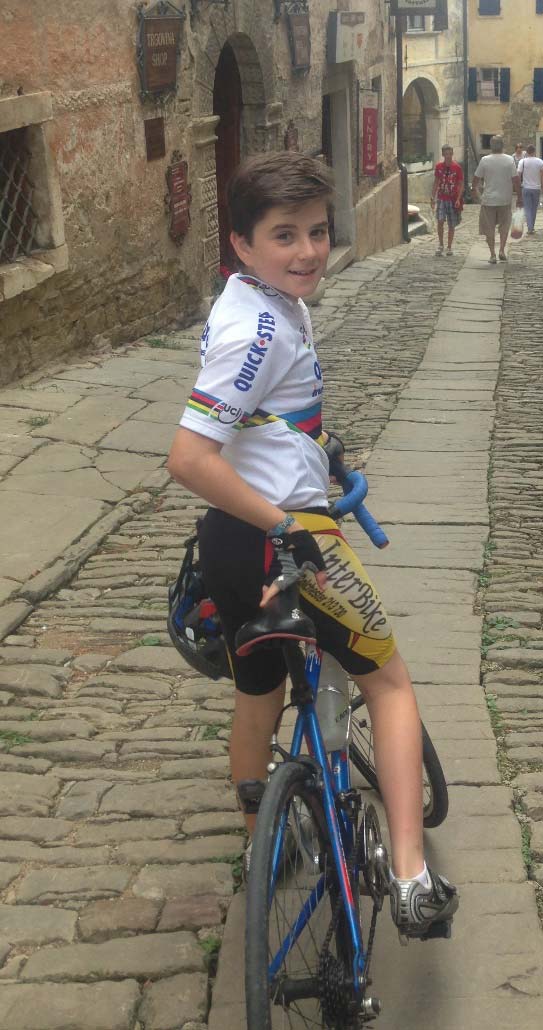 Felix is 11-year-old and he's from Newark-on-Trent, which just happens to be the lovely Midlands market town where my other half grew up and where most of his family still lives.

In July, Felix and his dad will set out on a 2300km charity bike ride from Newark to Slovenia to raise money for the very excellent Children's Bereavement Centre in Newark, which provides support for kids who are affected by the loss of a loved one, be it through death, divorce or separation. They are hoping to raise £5,000 for the centre (on Felix's JustGiving page, he says that every 22 minutes one child in the UK is faced with the death of a parent).

The trip will take them three or four weeks at around 70 miles – or 112km – a day. They will ride from Newark to Harwich for the ferry across to Holland. From there it's down through Europe, and on to the Rhine River route to the river's source in Switzerland before crossing the Alps and heading down into Slovenia.

"We will actually be cycling in France, in south Alsace," says Felix, "coming over near Karlsruhe, through Strasbourg and back over into Switzerland at Basel (about 200km).

I emailed Felix and his dad, Justin, to find out more about their trip. 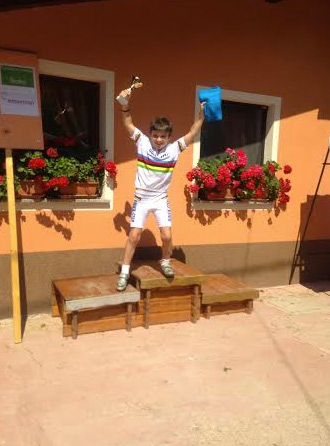 "I bought Felix his first road bike when he was 8," says Justin. "It was an old-school Decathlon Sport with the gears on the stem – like my first bike, a Raleigh Arena. The Decathlon was perfect as it taught Felix how the gears worked and got him used to the roads. It wasn’t long before we were doing 20-mile rides and as he got older we started going further afield. By the time he was 10, we were up to 40 or 50 miles.

"A couple of years ago, Felix and I entered a road race in Slovenia while we were on holiday. It went from the bottom of the valley at 180 metres above sea level up to 900 metres over 9km. Felix came third in the under 16s category and won a cup for being the youngest ever competitor finishing the climb in 52 minutes.

"Last summer we cycled the first leg of the Tour in Yorkshire and then cycled 700 km in 6 days from Trieste in Italy down into Croatia and around the coast. We loved being on the road just the two of us and said we’d do a really big ride for charity the following year."

How did you decide on the route?

"We have been to Slovenia a few times on holiday and love it. It’s a hidden jewel tucked away in the heart of Europe. Lots of people don’t even know where it is – in fact, before we went I don’t think we knew. It used to be the northern end of the old Yugoslavia and where Tito’s mother came from, so he had a soft spot for it and spent time at Lake Bled, which is probably the most famous spot outside the capital Ljubliana. 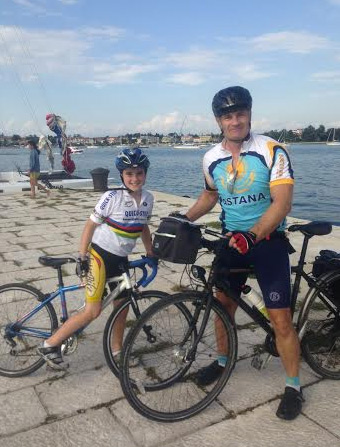 "There’s something about Slovenia which just draws us back, it’s how I imagine Switzerland to have been a hundred years ago – very natural, tiny and safe. So when we’ve been it’s been all about walking, cycling, swimming in rivers and diving off rocks. So it seemed the obvious destination.

"Once we had decided where we wanted to get to it was then a question of the best route. Last year I read Cycling Across Europe on a Bike Called Reggie by Andrew Sykes, so originally thought we’d cycle the Eurovelo 5 route, from Lille to Metz and then taking a left somewhere near Lucerne to head over the Alps. But when I started really looking into it, I found Eurovelo 15 which takes us the entire length of the Rhine through Holland, Germany, into France near Strasbourg before going into Switzerland. From there we’ll head over the Alps into Italy and head towards Slovenia. It seemed a more direct route with even more traffic-free sections.

"Neither of us know much about sat navs so we don’t have a Garmin or anything – we are relying on good old fashioned maps and guide books. Felix bought me Mike Wells book The Rhine Cycle Route which gives us a blow by blow of the route, at least from the Source of the Rhine south east of Basel down to the North Sea by the Hook of Holland. We’ve only really started our planning to be honest, but where not too worried as it’s a fairly well trodden route. Hopefully we’ll be able to average around 70 miles a day so should cover the 1400km from the North Sea to the source in around two weeks. Getting over the Alps will be more difficult but depending on the route we should be able to keep the averages up around 60 or 70m. But we should be fit by then, right?"

How are you preparing for the ride and what's the longest ride you've done before? 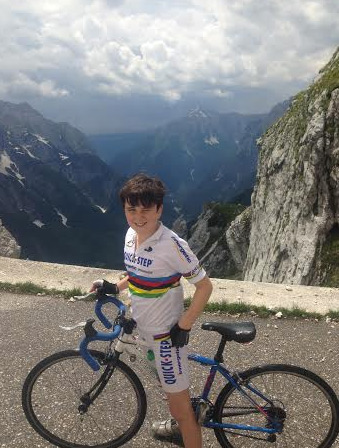 "The training is going to have to start soon, we know that, but the when it’s wet and windy it’s more difficult to put the miles in. Before we set off I think we need to be happy doing 200-300 miles a week as we have to be averaging around 450 miles a week if we are complete the ride in three and a half weeks.

"Last summer we rode with some Slovenian guys for the day. I think when they first saw Felix they thought 'Oh no we’re going to be hanging around all day. After about 80 miles, Felix and I were about half a mile back on a long drag. We were over taken by a young club rider and Felix decided to put his foot down and sit on his wheel. Within 5 minutes we were overtaking our guys and instead of peeling off, we stayed on the wheel. So half an hour later when we were drinking Coke at a road side bar, we got a knowing nod from them as they crawled back up too. That was a long day – 220km in total."

Can you tell us about your bikes?

"I ride a Specialized Secteur, but also have a faithful Cannondale touring bike," says Justin. "Very heavy, but bullet-proof. Felix has an Isla bike (a Luath 24). He’s just about on the limit for it now so we’re looking at buying something a bit bigger. For the big trip the jury’s out – whether to take a road bike or a hybrid. We’ll see what’s most comfortable over the next few months before we decide."

Can you tell us a bit about where you usually like to ride your bike?

"Where we live is flat, very flat! We often cycle around the villages out towards Lincoln and then Boston way. But if we want to push it a bit more, we stick the bikes in the car and head up to Harrogate and cycle in the Dales. We particularly like it around Leyburn or around Fountains Abbey near Ripon."

Will you have a support team with you on the ride?

"No, it’s just the two of us," says Justin. "We’re raising money for the Children’s Bereavement Centre as you know – but also need to raise some sponsorship to pay for the trip. We figure that if we use youth hostels we can get by on around €80 a day for the two of us – for accommodation and all food. It will be tight and may need to camp every now and then to keep the costs down – the only problem with that is the weight (I need to carry a tent and sleeping bags like I need a hole in the head), but if needs must we’ll do it."

Is there a particular reason you've chosen the Newark Bereavement Centre as your charity?

"We wanted to make a difference with a local charity. The big national ones do great work but the money we’d be able to raise wouldn’t even touch the sides. The Children’s Bereavement Centre was suggested to us by our very good friend, Sarah Coen. Sarah manages the local Specsavers in Newark and has supported this charity for a few years. She told us about it so we went to check it out. It does great work and relies almost exclusively on donations and fundraising activity. Plus a little girl in Felix’s class tragically lost her mum in a car accident 18 months ago and she and the school were supported by the charity, so it seemed the obvious choice."

"Amazingly – after only 3 weeks – we’ve already raised £1200 on Felix’s justgiving page. We’ve written to everyone and their dog to tell them about what we’re doing – from Prince Harry to Lord Sugar, Jonathan Ross to Bradley Wiggins. Local companies have been really supportive and we’ve had donations of £600 from four businesses so far. The £5000 target looked a mountain when we first set it, but now we think it’s really doable. We may even up the target if we look like it’s getting too close."

Please sponsor Felix and Justin on their justgiving page to help the Newark Children's Bereavement Centre.

See our charity cycling section for more on mixing riding with fundraising.