The annual La Montée du Géant du Tourmalet event has been cancelled for 2022. 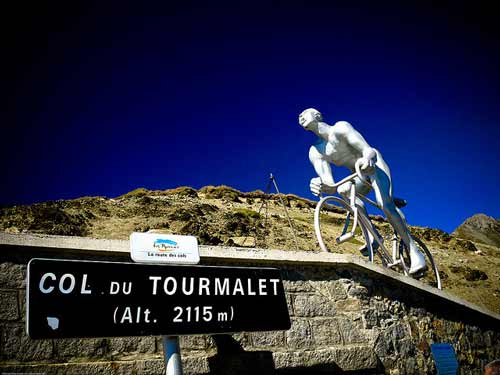 The iconic Tourmalet statue in his summer home. Photo: David

The Montée du Géant du Tourmalet is an early summer tradition in the Pyrenees that sees hundreds of cyclists gather in June every year to help take the iconic statue of Octave Lapize back up the Tourmalet.

But this year the event has been cancelled due, I'm told, to work being done on the mountain – having hundreds of cyclists at a building site was deemed a safety risk.

Each year, the Géant du Tourmalet statue is removed from its summer spot up top and taken down for winter. He's taken back each June after the snow has melted.

Lapize was the winner, in 1910, of the first-ever stage of the Tour de France in the Pyrenees. Lapize famously called race officials "assassins" after the staggering 325km stage (remember: no support cars, gears or carbon bikes, either!)

His statue has become a popular photo spot for cyclists ever since its debut on the mountain in 1999.

Guiding him back to the Tourmalet has since become a ritual for the local cycling community – hundreds of riders gather to pace a truck carrying the statue up the mountain.

The departure village usually rotates between local mountain towns – in 2022, the statue was meant to have left from Pierrefitte-Nestalas on June 4.

In ordinary times, participation is free (and there is usually also lots of cake, cheese and wine), so mark it in your calendar for 2023.

The Lapize statue won't be mounted this year while work takes place in and around the Maison Tourmalet-Pic du Midi at the summit, where the statue usually resides. A spokesman for the Office Départemental des Sports des Hautes-Pyrénées told me the work would mean the Tourmalet would be "transformed" for the 2023 season.

While there will be no Montée du Géant du Tourmalet procession this year, there will be a randonnée from either Bagnères or Lau Balagnas on June 11 for cyclists as part of a promotion to get people actively involved in the 2024 Paris Olympics. Watch this page for info on the ride.

(And if you're bringing non-cycling family or friends with you, see here for things to keep them occupied!)

Did you know we also have a closed Facebook group where you can chat with other cyclists?

Zoom in for bike routes in the High Pyrenees