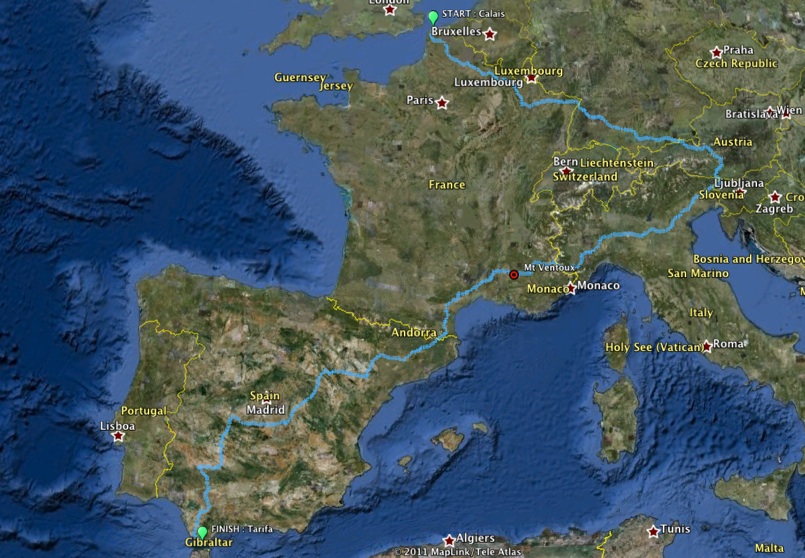 ** UPDATE MARCH 30, 2015: Unfortunately I've just received an email saying this ride has been cancelled due to various unforseen circumstances. **

Round-the-world cyclist Mark Beaumont will be back on the road through France in October hoping to raise up to £2.5 million for children's hospitals.

Beaumont will join Joe Mearns, founder with Laura Mearns (nee Stone) of the Race Across Europe, event organiser and novice cyclist Donald MacDonald, and British Cycling regional development manager Dan Small on the month-long 5900km ride from John O' Groats to Gibraltar. There are two more places up for grabs on the ride, which may be filled via crowdfunding or sponsorship.

Here's Joe Mearns introducing some of the work being done for kids at Great Ormond Street Hospital.

The route will be 2239.5km longer than this year's Tour de France (and there won't be any rest days), and take in more than 47,000m of climbing. It covers no less than 209km (and 6000 calories) every day – a bit like eating Christmas dinner each day just to maintain weight.

The ride starts on October 1, aiming for an October 31 arrival in Gibralter. It will start in Scotland, and go via England, France, Germany, Austria, Slovenia, Italy and Spain before arriving in Gibraltar.

The group is currently crowdfunding in addition to seeking corporate sponsorship to cover the costs of the logistics associated with the ride. Among the incentives for supporting the ride is the chance to join a leg of the ride. It is also possible to donate directly to the hospitals via the ride website.

Cyclists across all nine countries the ride passes through are also be encouraged to raise money for the children's hospitals involved.