Margriet Derksen is a regular at La Limousine André Dufraisse, an annual sportive based around the city of Limoges. She has this overview. 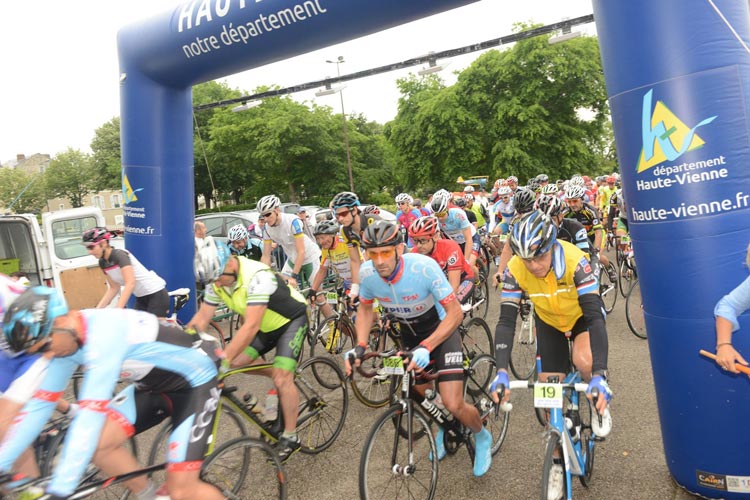 France is blessed with timed sportives large and small. La Limousine is one of the latter when compared to internationally recognised events like the Etape du Tour or Marmotte. Yet it’s these local events that truly capture grassroots French cycling culture.

Here’s what you need to know about riding La Limousine André Dufraisse.

What is La Limousine André Dufraisse?

It’s a well-organised, hilly sportive open to riders of all abilities.

La Limousine sportive is officially known as La Limousine André Dufraisse after a French cyclist who was born in the Silord, a local commune in the Haute-Vienne in 1926. One of the best cyclists France has ever produced, Dufraisse won the world cyclo-cross title five times in a row from 1954 to 1958. The only son of a peasant mother and a mason father, he first rode a bike aged 10 or 11 after finding an old one in the attic of his parents’ house. The story goes that the bike was too big – he used crates to help him climb on board, rolled six or seven metres and fell off.

La Limousine starts in Limoges town centre and ends in Panazol. Limoges is the largest city in the Haute-Vienne department of France and the capital of the old Limousin region (now part of Nouvelle-Aquitaine). We have a full overview of cycling in the Haute-Vienne here.

When is La Limousine?

This is a real local ‘event’ that’s very well organised. It attracts a wide range of cyclists with different abilities. (In 2017 French pro rider Sylvain Chavanel was invited and I had the honour of cycling a few kilometres in his wheel!)

It is perfect for more experienced riders, as well as those wanting to try a timed sportive for the first time.

There are support vehicles and regular feed stations and – being France – a nice meal upon arrival at the finish line.

How far do I have to ride? 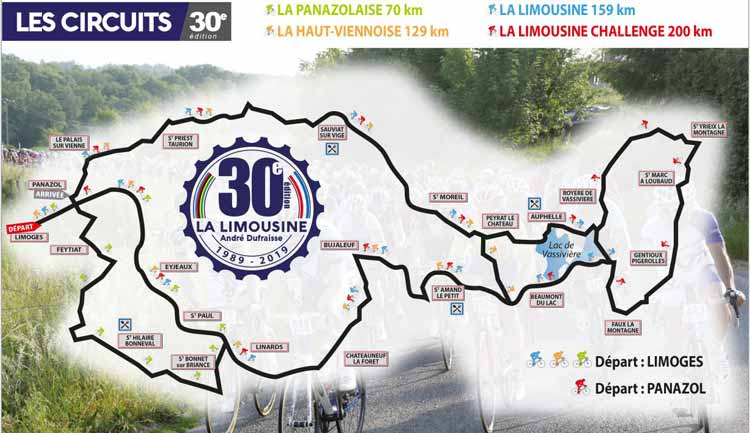 There are usually four distances – they change little bit every year so we have mapped a sample (from 2018) on the accommodation map below so you can see the area (you can click on the coloured lines to open the descriptions and download the GPX traces for an idea of terrain etc but bear in mind this year may be a bit different. The route will, however always be marked out on the day and the official website usually always links to GPS traces for that year):

The area around Limoges is a great base ordinarily for a cycling holiday because it attracts a lot fewer tourists (including cycle tourists) than the Dordogne to the south. The roads are quieter and the villages still generally authentic. But there is also a growing cycling scene with more and more bike-friendly accommodation providers, bike hire outlets and cycle tour operators based in the region.

That said, opportunities are still a little limited for high quality road bike hire – leisure/hybrid hire is still much more common in this area. You can use the map below to find bike hire and accommodation, or you can use our bespoke bike hire service if you get stuck.

See the offical website. See 'inscription' to register. Entry costs €21-€43, dpeending on the course you choose and whether you hold a racing license. The meal at the end of the day costs €12 extra. You will also need a medical certifcate – see here.

About our contributor
Margriet Derksen is Dutch cyclist (road and MTB) who lives in the French Auvergne. She is active in local cycling clubs and runs specialist cycling accommodation in Le Mont-Dore, 40km south-west of Clermont-Ferrand.