One of our readers, David from the US, has emailed us these tips for anyone cycling the Canal de Garonne and/or the Canal du Midi. (Thanks David!) 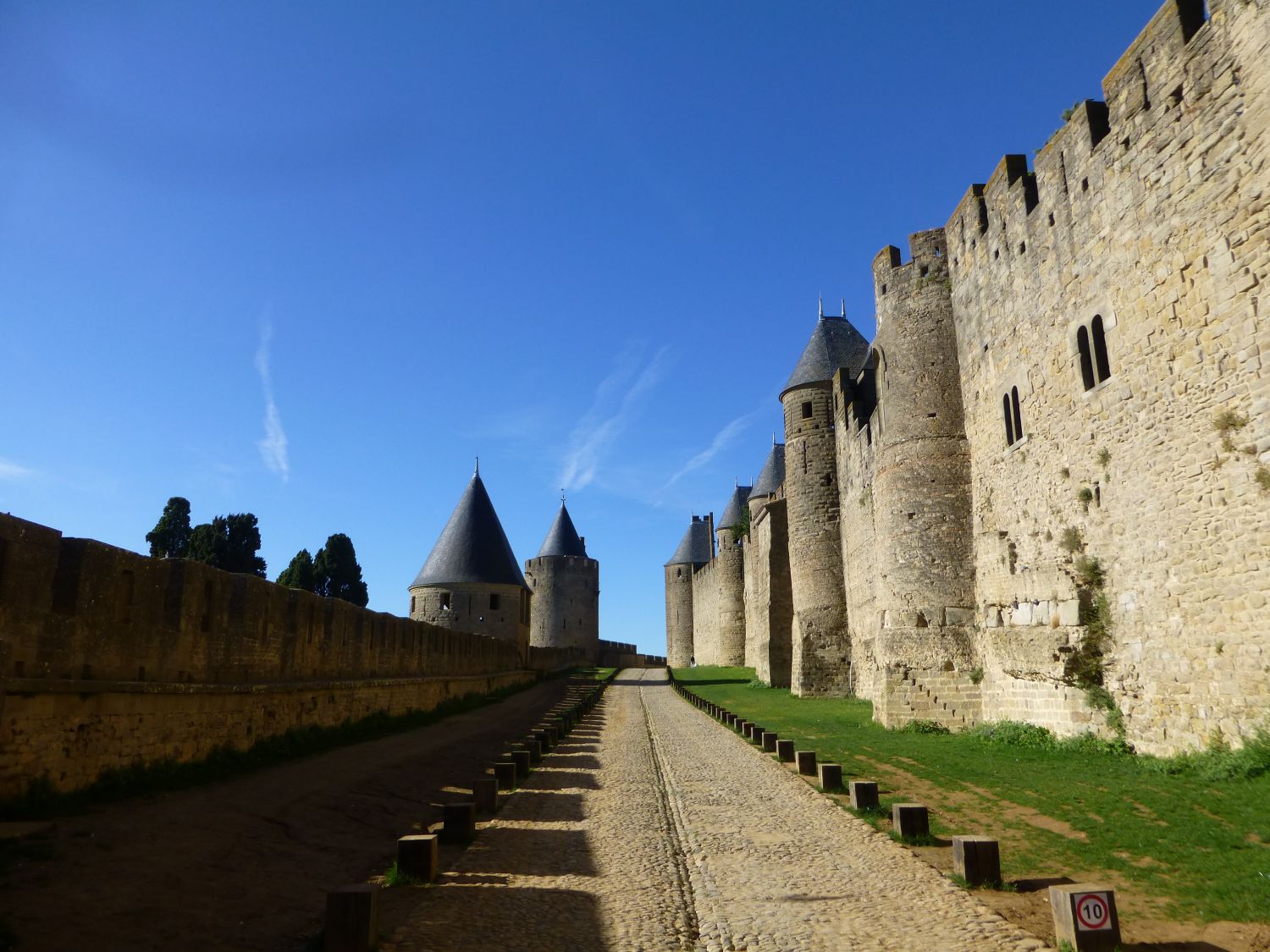 Just a quick update. My wife and I just got back from a wonderful cycle trip from the airport in Bordeaux to Gruissan on the Med coast via both the Canal Latteral du Garonne (now the Canal de Garonne) and the Canal du Midi. We assembled our bicycles in the airport and rode from there to Bordeaux proper where spent a couple of days to overcome jet lag and then onto the canal(s).

A couple of quick thoughts:

Cycling from Bordeaux to the Mediterranean

Canal Latteral du Garonne: Wonderfully marked, each small city proudly diplaying a small billboard/placard with what they offered and a short brief history along the canal. Canal path surface wonderful. A pleasure to ride.

Canal du Midi: Over hyped in our opinion. The path could be called "fair" tending to "poor" for the most part but just plain terrible in many stretches with lots of roots crossing the pathway. The section between Ecluse de l'Ocean and Castelnaudary has some of the worst paths – more like a mtn bike single track and after a rain I can see where it would be close to impassable. We were two days since the rain and the mud was still deep in places. We were very glad we brought mtn bikes as we saw a couple with loaded skinny tired bikes really struggling.

Small cities were unmarked and more than once I had to hunt up a local to get the name of the place we were enjoying. Compared to Canal Latteral du Garonne, the cycling experience was a far distant second.

We were lucky in choosing to ride from the north (Bordeaux) to the south as the prevailing strong winds during our time there were from the north. We encountered serveral cyclists headed north who were not enjoying the wind at all as for large stretches of the Midi the trees have been cut down and there was no protection from the wind.

Canal de la Robine: Not as much traffic but better surface for cycling than Canal du Midi. Narbonne is a very beautiful city. We took the side route to the coast from the Robine south of Narbonne: Itin. Cyclable "La Littorale" to Gruissan and Gruissan-plage which was excellent, although very windy. We were very glad we had left our panniers in Narbonne at our hotel as the sharp north wind along the treeless canal made cycling back less fun. 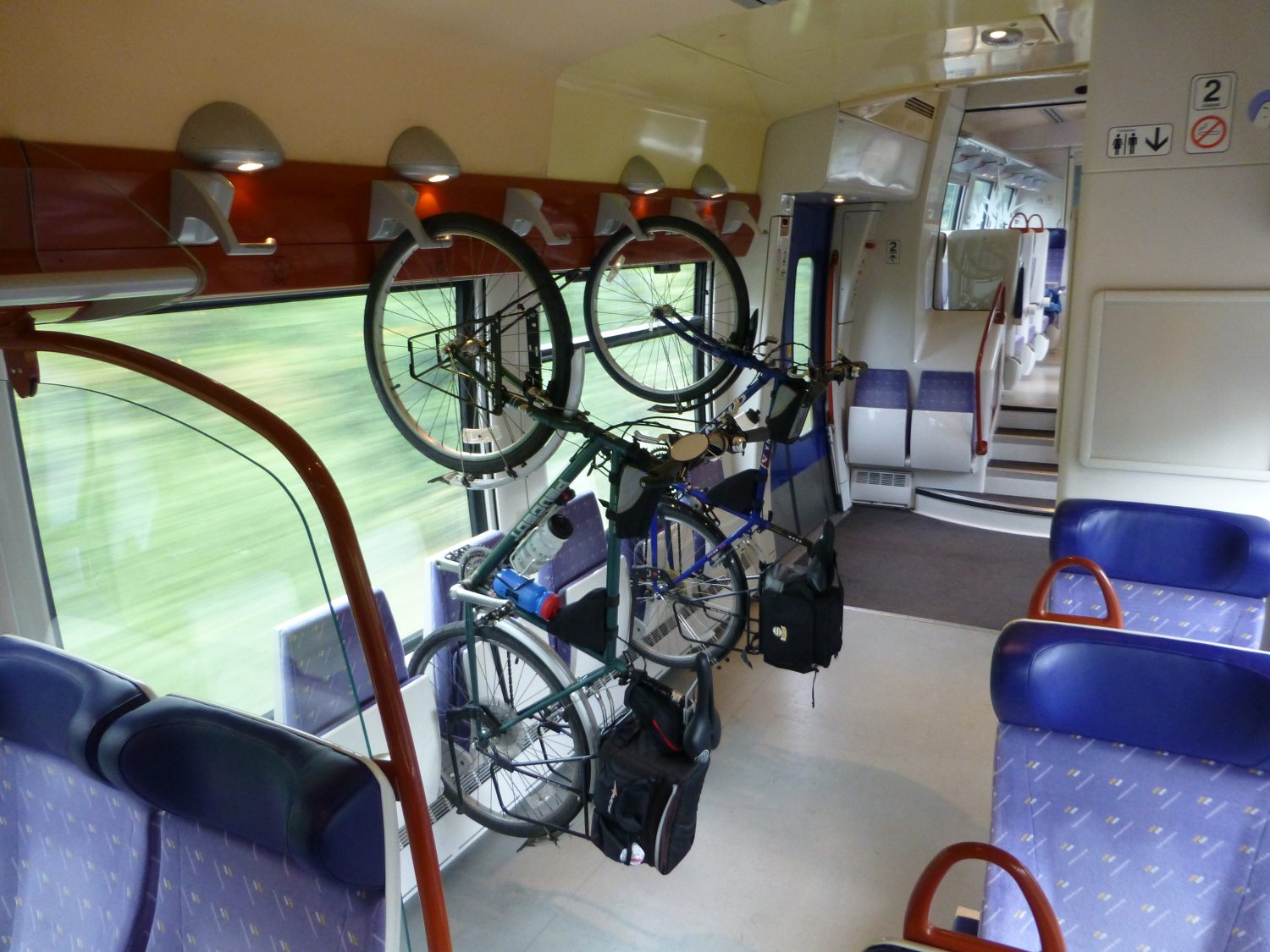 Commuter train storage for David's bikes. See David's feedback on his experiences catching French trains in the comments field at the bottom of our French bikes and trains article. Photo: David Lord

We found Richard Peace's Cycling Southern France heavy to carry with volume of information that didn't equal the extra weight. Lots of synthetic paper (absolutely waterproof) which weighs far less and is very durable is available these days. Fine for a overview but I will leave my copy home next trip.

There's a really fine Cave Cooperative right next to the canal path in Creon – it would be good to tell readers about this sort of thing and how you can fill your extra water bottle with some fine local wine for €0.85. Odd that this sort of thing and the very poor marking of the path at Ecluse de lÓcean were not mentioned in the book.

Both the Guide no 1 and no 2 Association Velo books are worth every euro spent. Even though my French is not good, they were a reliable source of information.

Note that in reference to one leaving the Canal du Midi to go on the Canal de la Rubine just after le Somail; in the Guide no 1 from Assiciation Velo", "A velo, le long du canal du Midi". It would be best amended to make a note that where one leaves the tracks after the bridge to get on the Canal de la Rubine. The track down off the bridge embankment is very very steep and hard to find from the top. This is on page 42. However, if one cannot find the way down off the bridge embankment, if one continues along the tracks and takes the first crossroad to the left, one soon rejoins the canal. We couldn't find the way down and ended up walking partway along the tracks, which is hard going as it is very rough one has to walk one's bicycle.

There is a small service type road on the left hand side of the tracks which starts fairly soon and taking that would be preferred to walking the whole distance on the tracks to the cross road.

Later we encountered a New Zealand couple who said they only found the route down the embankment because someone was happening to come up when they were there. And that the wife was too frightened to move her bike down the slope because of the steepness so her "hero" husband moved both bicycles. Perhaps they have reballasted that part of the track since the book was written and thus the difficulty in finding the track down. Leastways we couldn't find it and we spent some time looking. It would be nice if someone made some sort of marker for the track.

One more tip: we purchased a older Nokia e72 phone before we left the US. We bought it on ebay. It is a quad phone and one simply purchases a SIM card when one arrives in France (I bought one from the La Poste). The cool feature is the GPS and the free maps system from Nokia called ovi. The GPS feature is very worthwhile and the phones have a long run time on each charge (14 plus hours and we never had ours give a low battery warning).

The maps are a free download and include US maps (state by state) as well as most of Europe. It is wifi equipped and if one visits locations when connected, one can get the satellite photos which stay in the phone's memory. For example I had all of Bordeaux in the phone which made for easy navigating within the city and from the airport to our hotel. Sorry if this is unclear. It is my first "smart phone" and at times smarter than I. One can plan a route or create a deviation as needed and the cost is quite low when compared to a GPS specialized for one's bicycle. I got that tip and suggestion from a posting on the Warm Showers website.

We left our bicycles at our friends in Chef-Boutonne and plan of returning next year for further adventures.

Thanks to David for sharing his tips. If you have any tips or advice on cycling in France, please email lyn@freewheelingfrance.com so we can share your experiences with other cyclists.