Australians at the Tour de France

A little walk down memory lane to pay tribute to one of Australian cycling's forgotten heroes. By Lynette Eyb.

With Cadel Evans' win at the 2011 Tour de France – the first ever by an Australian – Lynette thought I'd indulge in a little history of Australians in the Tour de France, and at the same time pay tribute to one of cycling's forgotten heroes.

The win by Evans comes 30 years after Phil Anderson became the first Australian to wear the Yellow Jersey at the Tour. He was followed by a succession Aussie Yellow Jerseys, mostly cyclists ultimately chasing the Green points jersey: Stuart O'Grady, Robbie McEwen and Bradley McGee.

You need to go back to 1914 to find the first Australians (and the first native English speakers) to ride the Tour de France. They were Don Kirkham and Snowy Munro, who finished 17th and 20th respectively out of a field of 143.

But it wasn't until Hubert Opperman ventured abroad that an Australian cyclist really made a mark on European racing. Opperman was – and in some circles still is – considered one of the greats of European cycling during the 1920s and '30s. He won the Paris-Brest-Paris in 1931, and finished 12th in 1928 Tour de France (riding in a team of just 4 cyclists from Australasia, he was mostly cycling alone) and 18th in the 1931 Tour. Four years later, he rode 461.75 miles in 24 hours to set a new world record. There are some great anecdotes listed in his Wikipedia entry.

Exactly why he's not eulogised in Australian sporting circles like the cricketing great Don Bradman, the race horse Phar Lap (yes, I know, I  know – he was actually born in New Zealand ...), and countless men who have played codes of football that no other country bothers with, I'm not entirely sure. Likely it's because cycling is still a marginal sport Down Under.

Perhaps his successful post-cycling foray into politics – where he rose to hold various ministries in the Holt and Menzies governments – overshadowed his earlier life as a distinguished rider. Opperman's knighthood in 1968 was, after all, for his services as a diplomat (he was High Commissioner to Malta), rather than for his talent for riding a bike very fast over long distances for extended periods of time. Perhaps it's just that there was no 24-hour media back then and cycling was an obscure, poorly understood and under-appreciated sport Down Under. (Some would argue that until Evans claimed the Yellow Jersey, that was still the case.) Regardless, the Cycling History Collection is helping to redress the balance and lift Opperman out of his relative sporting obscurity.

The collection is made up of a series of historic photos from the 1928-31 Tours de France that were bought from the Opperman Estate by a group of cycling enthusiasts headed by ex-Tour de France cyclist and current Australian cycling administrator Stephen Hodge.

The black and white images – there are 41 in total – are printed on square glass slides and are believed to have been part of a photographic collection Opperman displayed at Town Halls across Australia to fund the 1931 Australian Tour team.

Hodge's organisation has restored and released the best 15 slides from the 1930 Tour as limited edition reprints.

The photos feature iconic moments and famous riders from the 1930 Tour, including Yellow Jersey winner André Leducq (he won again in 1932); Charles Pelissier, who won a 8 sprint stages (a feat matched only by Eddy Merckx and Freddy Maertens); and five-time Giro d'Italia winner, the Italian Alfredo Binda, who won the Tourmalet stage in 1930.

It's a fascinating collection to browse online even if you don't have A$295 to shell out for a reprint of your own (though there's no doubt any of the photos would make a great gift for any cycling fan).

While I'm at it, there's an exhibition of Australian Tour de France highlights at the National Sports Museum in Melbourne until December 20. Originally staged to commemorate the 30 years since Phil Anderson wore yellow, the organisers are no doubt chuffed to bits with the outcome of the 2011 Tour and hastily adding Cadel Evans memorabilia to the display (though as I write, the website is yet to be updated, so perhaps not...)

For anyone interested in the history of Britons at the Tour de France history, see William Fotheringham's Roule Britannia (UK, US) and Graeme Fife's Brian Robinson: Pioneer (UK, US).

Irish cycling fans should look to Shay Elliott: The Life and Death of Ireland's First Yellow Jersey (UK, US). 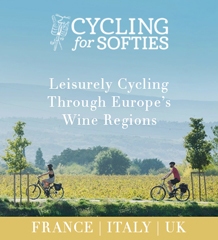