Hilde Morris and Heather Godrey are back cycling (and writing) for us. Here they report from the Canal du Midi. 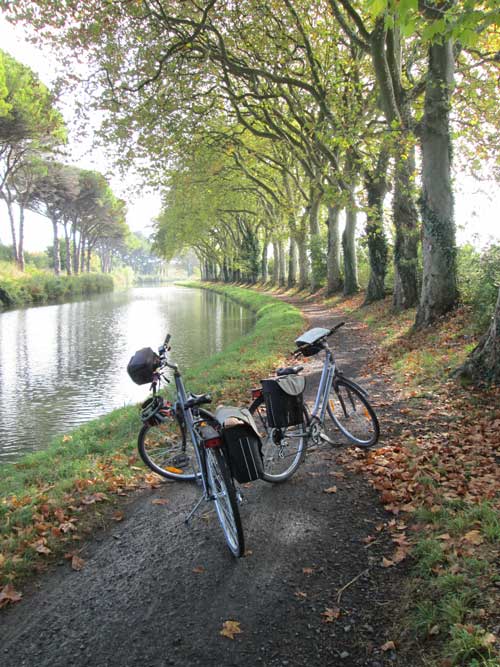 Last year was stressful for us – a very busy summer and a death in the family, so we did not manage our usual self-organised velo-jaunt in the north of France.

Instead, we thought it would be great to get someone else to do the planning for us. I had always wanted to visit the Minervois and really fancied Inntravel's Carcassonne to the sea holiday along the canals (mostly the Canal du Midi). I must say I really missed planning and researching the ride myself, however the countryside is so fabulous that we enjoyed every minute (well, almost, read on ...)

We spent the night before our trip in a hotel at St Pancras, ready to take the 9.30am Eurostar to Paris. Arriving around noon, we swiftly crossed to the Gare de Lyon and our train to Narbonne. We arrived at Carcassonne just after dark and the sight of those battlements, lit up in the dark, was such a thrill.

We stayed in the heart of the Old Town at the Hotel du Donjon, a bit more upmarket than our usual stopover. but it was perfect for us – the day after we arrived, we spent exploring the narrow alleys and ramparts.

Then, bright and early the next morning, our bikes were delivered to us at the hotel. We would have preferred our own, trusted bikes but we could not face the hassle of getting them all the way across France on the train, so we were happy with the biesk arranged via the Inntravel package. They were well-maintained and well-equipped.

Before commenting on the route, I must point out that at the time we cycled it, 70% of the Canal du Midi towpath was officially closed. That is, there were barriers in place when we were there in October 2015.

The problem is that the beautiful plane trees that line the Canal have a bug which is slowly destroying them. The authorities are in the process of cutting down the trees and replanting, but instead of doing a short stretch of the Canal path at a time, they have cordonned off large swathes of the towpath.

Despite his, we only saw recently cut trunks and mechanical diggers on the stretch just out of Carcassonne, and thereafter, we could tell from the state of the cut trunks that the work had been done months (a year?) before.

In most places, the barriers had been pushed apart/pushed down, either by frustrated cyclists or local joggers/dog walkers and we just carried on, hoping to be able to leave the path at the next village. It was a bit stressful, never knowing if we were going to have to retrace our steps if the path was blocked at the end, but this only happened once at Le Sommeil and we managed to get our bikes down a steep bank, avoiding the closed barrier.

Riding along this section of the Canal was just perfect. The path was easy enough to be able to look around and enjoy the scenery, while at the same time wave to folk on the boats or admire picturesque locks and ancient aquaducts.

The towpaths were at times narrow and bumpy but quite navigable. The village of Homps is pretty insignificant, but an important stop for all the boats, and there is not much to see other than the cafes along the bank, near where the boats tie up.

We stayed in Le Jardin d'Homps, a lovely tranquil place, superb garden, beautiful decor, steeped in history, where we had a warm welcome from Guy. (You can read our review here). The highlight of this stopover for us was a fabulous restaurant, Le Foudre where we ate both nights. It's just on the edge of the village, with a small menu of local food – I am pretty fussy, especially after a day's cycling and this was some of the best food I have ever eaten anywhere. 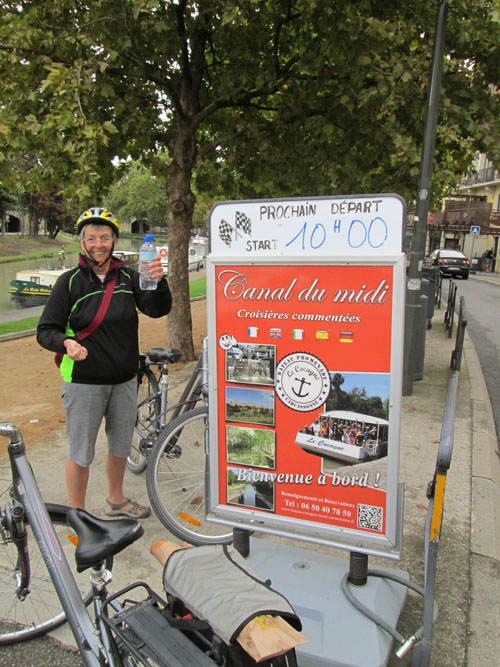 Option to lock your bike and take a boat.

This day was absolutely FANTASTIC! We cycled out of Homps, through villages and vineyards up into the foothills of the Montagne Noire to reach the picturesque village of Minerve, an ancient place with a bloody history, a citadel with ancient walls towering above the scenic Gorge de la Cesse. It was challenging and we had to push our bikes up the last few kilometres, but it was worth it. Not to be missed! And the way back was amazing – the best downhill ride ever, it went on and on, spiralling down till we reached the plain, totally exhilarating. We stayed for a second night with Guy and Nina at Le Jardin d'Homps.

We left the Canal, heading north through gently undulating vineyards and olive groves. The grape harvest had just finished and the scent of fermenting grapes filled the air; it did not take us long to notice that the picking machines always left the lowest bunches, so there was never a problem with refreshments en route.

Our destination was Cruzy to stay at Le Clos Mazerolles, a small guest house in the centre of the village. Madame provides the evening meal as there seems to be nowhere else to eat nearby. There isn't a lot to recommend in Cruzy; the guesthouse was OK, but we've stayed in many more welcoming places (with better breakfasts!) in France.

We joined an offshoot of the Canal du Midi, the Canal de la Robine, which we followed into the heart of the lovely Roman town of Narbonne. This is a short ride, around 27 kilometres so you can easily arrive by lunch time, which is perfect as there is a lot to see in this place.

We stayed for two nights at the Hotel de la Residence, and I cannot speak too highly of this hotel. (You can read our review here). 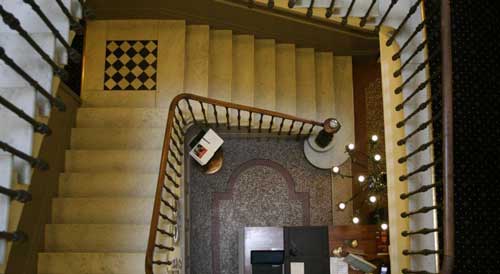 What a total delight! Staff lovely, room good, breakfast good, perfectly situated to explore the town. But what I loved most was the place itself! It still feels like the rather grand family home that it once was. The décor is superb! Totally modern but everything, the pictures, the lamps, all in keeping with the lovely old Fin du Siecle banisters and stunning black marble fire-places.

What a find, a superb place to stay. We spent that afternoon wandering round the old town on foot, taking in the magnificent 13th century cathedral, climbing the famous tower, checking out the Roman paving and generally relaxing. 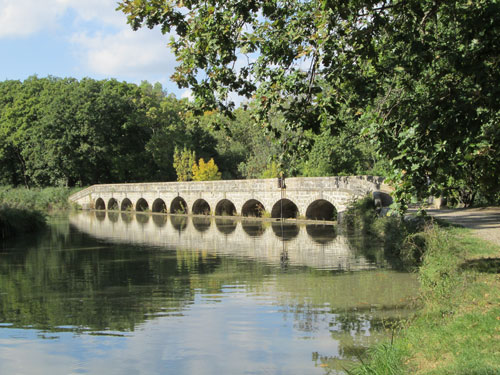 We again took to the towpath along the canal, this time going south out of town to spend the day cycling through the salt marshes and lagoons of the Parc Naturel de la Narbonnaise.

Our goal was Gruissan, a fishing village on a hill between two lagoons, with narrow alleyways encircling the ruins of a 12th century watch-tower. There's also a large marina and a fabulously long sandy beach. Most of our ride had been cloudy, but for our last day the sun came out and we had a lovely swim in the Med before cycling back, looking out for flamingoes and storks. The perfect end to a lovely ride.

Hilde Morris and Heather Godrey are two sixtysomething cyclists who live in England. They are always planning their next French cycling holiday.

We recommend that before riding the canal this year you check locally on towpath closures. Hotels and B&Bs are generally well informed about the situation on the ground, as are local bike hire companies. If you're taking an organised tour, ask for route maps that take in any necessary detours.

See here for a general overview of cycling the Canal du Midi. We also have these tips and these tips. See here for the full Canal des Deux Mers bike route.