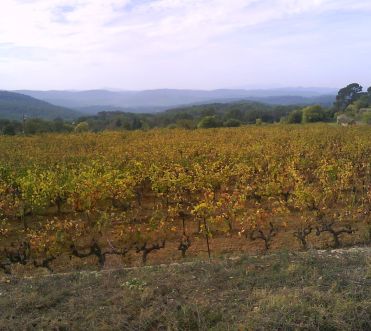 The countryside surrounding Lorgues. Mountain views just over 30km from the Mediterranean. 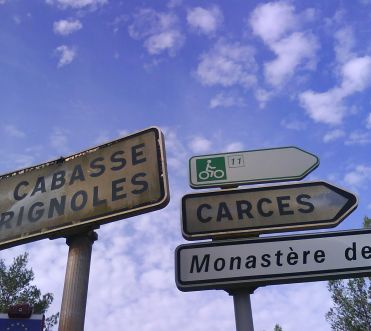 Becky Allen and Mark Goodson chart this 72km circular bike route that loops around from Vidauban through Lorgues in the Var department. Coupled with this other 72km route, it makes for a great weekend of cycling in Provence.

If you've wondered about cycling in the south of France but written it off because you think it's all about the beaches of the Côte d'Azur, think again. Although the coastal areas of the Var department of Provence-Alpes-Côte d'Azur offers few decent day rides, if you travel just a few miles inland onto the plain between the Massif des Maures and the higher mountains of Verdon, you'll find some beautiful day rides.

For committed grimpeurs, there are some pretty demanding routes, with stiff climbs and fast, technical descents. For the rest of us, while there are no flat routes, plan sensibly and you'll find wonderful day rides around the 80km mark that will take you on quiet roads through the vineyards, olives, cork oak and pine of the Var – one of France's most wooded départements – with no shortage of village cafes to delay you.

This is one of the regular club runs of the Velo Club Vidaubannais. It's around 72km. We'd steer clear of it in midsummer when it's usually over 30C, but in spring you'll find the verges covered with flowers and in the autumn as the vines, chestnut and poplar yellow and redden it's just as colourful. 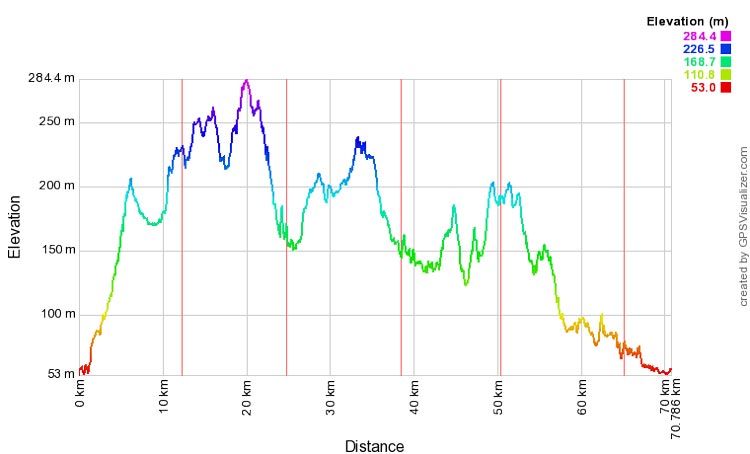 The ride starts in Vidauban. There's a big, free car park behind the Spar on the N7, or if you come by train a few services between Nice and Toulon stop in the village, and many more at Les Arcs-Draguignan, 4km away.

Leaving the village on the D48, the road heads off towards Lorgues under a magnificent avenue of plane trees. The road climbs gently but steadily past vines, pine and cork oak. Just after the 5km from Lorgues marker the road heads back down hill. Where it joins the D10, turn left and you'll soon see the town of Lorgues, and its enormous church, the Collégiale Saint Martin.

The D10 is a busier road but a cycle lane runs almost all the way to Lorgues (11km). Cross the roundabout and head uphill into the town, past the Collégiale, which is the second largest church in the Var, and dominates the town.

When you reach the main street head left, where there are plenty of cafes – including the Hôtel du Parc – for your first coffee stop.

Continue up the main street, passing the elegant Hôtel de Ville (Town Hall). The road bears right and when you get to the roundabout, take the second exit along the D50 towards Entrecasteaux. The road undulates through small, terraced olive groves and vines and after the Château Sainte Foy the views stretch almost 80km to Mont Caume near Toulon. As you descend into Entrecasteaux, there's another lovely view of the village and its castle before you turn left onto the D31, cross the river and enter the village (26km).

Like Lorgues, Entrecasteaux is dominated by a single building, its 17th century chateau. Never too soon for another coffee stop, there are a couple of small cafes where you can sit and enjoy the view of the castle.

The run down to Carcès is a welcome long, swooping, downhill stretch through more vineyards. When the road meets the D222, turn left towards Carcès (43km) and then right across the river before bearing left on the D13 towards the Lac de Carcès.

The road climbs out of Carcès and as the D279 forks left you have a choice of routes: either continue along the D13, following the shore of the lake and then left up the D79 to the Abbaye du Thoronet; or take the shorter and slightly less hilly D279 which undulates through vineyards on a very quiet road to the abbey (51km).

Either way stop at the abbey, which is a gem. Hidden in the forest this simple 12th century Cistercian abbey is – together with Silvacane and Senanque – one of the Three Sisters of Provence. The abbey is open all year and during the season often hosts classical concerts. There's a small cafe in the car park.

Continue on the D79 up and then downhill into the village of Le Thoronet and as you leave the village turn left onto the D84 which follows the valley of the River Argens all the way back to the N7. Turn left and head into Vidauban, past the excellent village cycle shop – Velo Pro Shop – and back to the car park (72km).

Becky Allen is a freelance journalist based in Cambridge. You can read more of her work at www.beckyallen.org. Mark Goodson is a sales consultant and business coach. He enjoys cycling long distances, slowly. He has started charting his adventures here.

Bike hire in the Var

For bike rental throughout Provence, see our bike hire listings. Book well ahead in summer, especially if you are after high-spec road bike hire.

Accommodation for cycling in the Var

See our map at the top of the page for accommodation nearby or browse our accommodation listings for B&Bs, hotels, campsites and self-catering accommodation that welcomes cyclists. See also this advice for finding bike-friendly accommodation in France, or search a reliable site such as booking.com.

If you prefer a guided or self-guided cycling holiday, or if you'd like some local advice planning your routes, see our organised tours section for a range of companies offering cycling tours of Provence.

More information on cycling in the Var

The official Var tourism website has a range of information available on cycling in the Var, including some suggested routes and additional accommodation options. See also this excellent brochure of 22 cycle routes in the Var. It's in French, but the route maps are great and the ride descriptions are clear, making it relatively easy to follow.