You can cycle the ViaRhôna bike route for 815km from Lake Geneva to the Mediterranean. Here's what you need to know.

Distance: 815km
Difficulty: Varies – some of the northern shared road sections in particular can be busy with motor traffic. The route (June 2017) is still a mix of fully signposted sections and provisional sections.

The ViaRhôna forms part of EuroVelo 17 Rhone Cycle Route, which loosely follows the river as it connects the Alps the Mediterranean coast at Provence via Lake Geneva. Importantly, it links into Lyon, which along with Strasbourg is a leading light for cycling in France. Lyon is home to a hugely successful public bike hire scheme that provided the blueprint for Paris. It also happens to be the gastronomic capital of France, with an absurd number of Michelin-star restaurants.

Back on the bike, we have a report on the northern end of the Via Rhona from Geneva to Belley here.

Midway down the route there's the Dolce Via bike route, a lovely diversion west into the Ardeche as the Via Rhona heads south from Valence.

Right at the southern end of the ViaRhôna there are two branches. The first goes south to Port-Saint-Louis-du-Rhône, where the river itself comes out at the Mediterranean, having travelled along the eastern fringes of the Camargue in Provence.

The other branch of the ViaRhôna contnues west to Sete to link up with the Canal du Midi bike route. From there it becomes the Canal des Deux Mers bike route that eventually links to Bordeaux and the Atlantic coast (and in turn links with the EuroVelo 1 La Vélodyssée).

So you're beginning to see how all these wonderful bike routes are interwoven to provide stepping stones across France. The ViaRhôna provides an important piece of the puzzle.

The route is (or will soon be) signposted – look out for this sign:

We'd love your feedback if you've ridden all or part of the ViaRhôna. You can leave your thoughts in the comments below to help other riders plan their trips. We are also keen to hear about bike-friendly places to stay on the route.

See our map above for accommodation on the route. For bike hire, use our bespoke service – we work with several local companies that can deliver a bike to you in Geneva and pick it up in Provence (or vice versa). 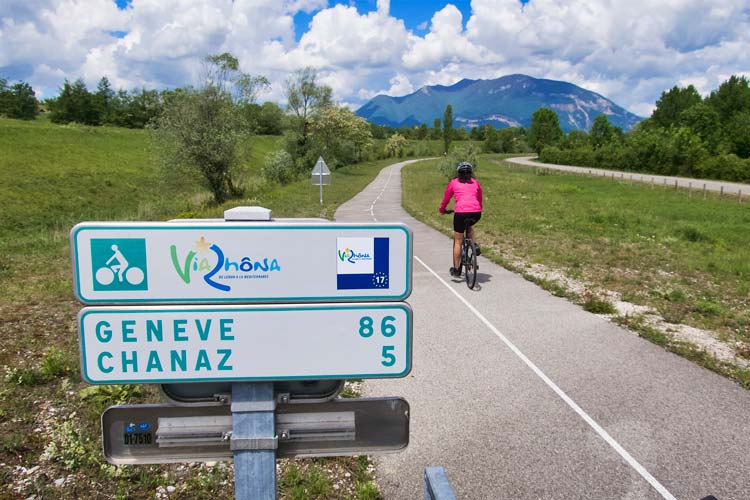