The circular Circuit du Duc de Lauzun near Eymet south of Bergerac is a gem of a bike route through vineyards, bastide towns and valleys.

The area in the Bordeaux-Bergerac-Cahors triangle is, for us, one of the hidden cycling gems of south-west France (we know this because we live west of Bergerac and we ride this area A LOT).

This particular route is within easy reach of Bergerac and Bordeaux, so it's a super ride around which to base a cycling holiday. Stronger riders can ride it in full as a day ride or it can be ridden as part of a multi-day cycling tour. From nearby Eymet, a 2017 Tour de France stage town, you can even retrace the TDF route.

This route can also be incorporated into a series of smaller day rides by taking shortcuts and diversions along quiet back roads. The roads are generally empty (particularly compared to 'Dordogne proper' further east). Hills are undulating and not impossible for the leisure cyclist.

This route at the south-western edge is less than 20km from the Bordeaux-Mediterranean route at the Canal de Garonne. It can also be combined with the Circuit Vignes et Vergers en Duraquois, a vineyard and orchard route from Duras).

This is a little-cycled part of France – it's a wonderful area for agriculture and old villages, yet close enough to tourist hotspots to ensure there is plenty of things to do when you're not on your bike. Saint-Emilion is a 60km away, while Ste-Foy-la-Grande – whose Saturday market has been voted the best in France – is a lovely day ride away. The area is also scattered with vineyards for wine-tasting. 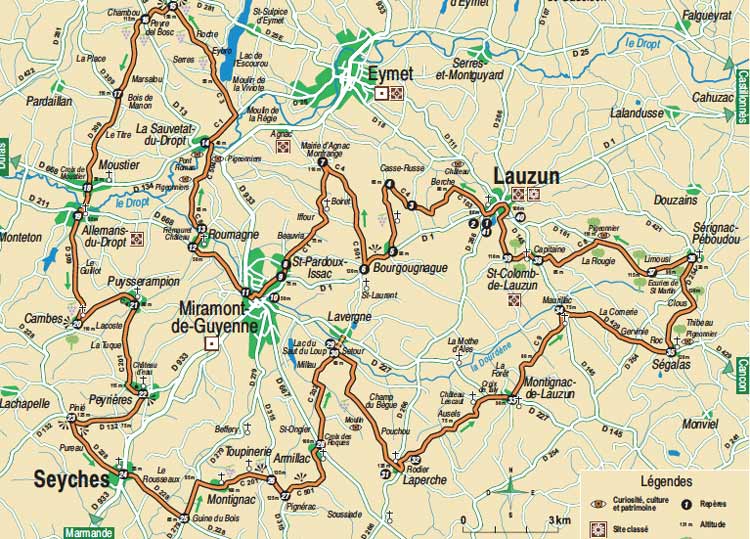 Other relevant bike routes and pages for this area