10 things to eat while cycling in Normandy

Eating local specialities is a huge part of enjoying a cycling holiday in France. We've done the hard work for you to come up with these must-eats in Normandy.

We get a lot of questions about planning cycling tours in France – from ideas for where to stop overnight to lunch stop tips or advice about which routes work best for X, Y or Z. Often, we find our responses are centred on two things: food and wine.

Normandy is one of France's more under-rated foodie regions, often overshadowed by the big food and wine hitters of Burgundy, Provence, Bordeaux and the Loire. But whether it's in a glass or on a plate, Normandy is a haven for foodies.

We've come up with 10 great foodie ideas you can incorporate into a DIY biking holiday in northern France. 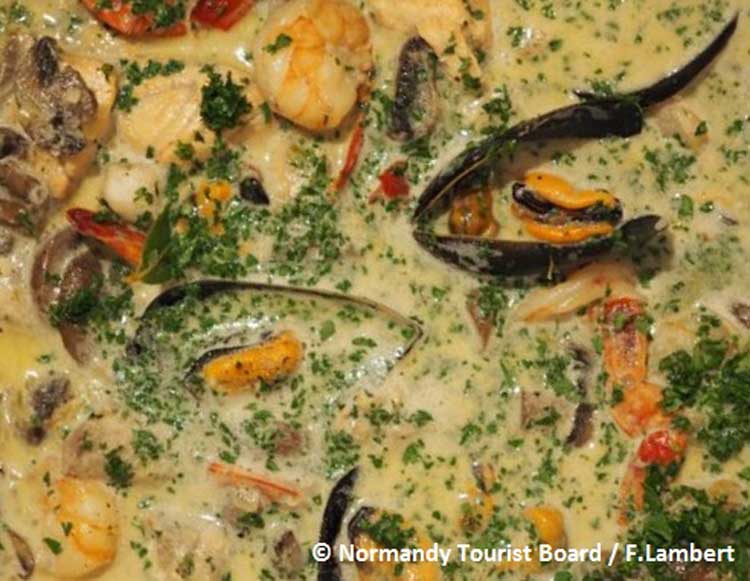 Legend has it this Normandy classic was created in the 1960s in a mariners and sailors’ tavern called La Marmite Dieppoise on the quays of Dieppe. The owner, Madame Maurice, was renowned in the region for her delicious fish dishes à la dieppoise (Dieppe-style). Named after the restaurant in which it was invented, Madame Maurice’s dish is to this day prepared using local fish and seafood: sole, red mullet, turbot, prawns and mussels, which are complemented with fresh celery, parsley, leek, onions and spices such as paprika and cayenne pepper. This rich and hearty Norman fish stew could certainly give its Provençal counterpart bouillabaisse a run for its money!

Cycling tip: Dieppe is on both the Avenue Verte and EuroVelo 4 cycle routes, so why not stop off for a bite at La Marmite Dieppoise en route?

The Busnel Distillery is one of the oldest producers of calvados (apple brandy) in the Pays d’Auges, a ‘controlled designation of origin’ (AOC), meaning that anything produced in this area receives a quality label. The distillery arguably performs nothing short of a miracle, turning apples into cider, then distilling cider to producing eau de vie, then distilling eau de vie in oak casks for years until it becomes the golden calva that is used to make calvados. The Busnel Distillery runs guided tours in English which lets visitors see the different stages of distilling and sample a selection of the distillery’s best-selling products – but best have a break before you hop on your bike again!

Cycling tip: The Busnel Distillery is located in the town of Cormeilles, which is 12km away from Saint-André-d’Hébertot on the EuroVelo 4 cycle route. Why not combine your tour of the distillery with a lunch break at nearby foodie hotspot and brainchild of Chef Alexis Osmont, Gourmandises? 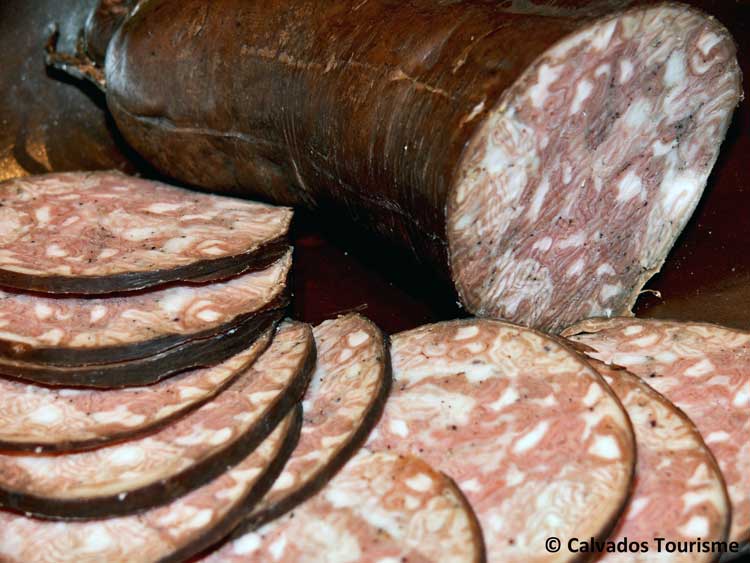 Chitterling sausage (known in French as andouille) is a Norman specialty. Made from pig intestines, regarded as somewhat of a local delicacy, and seasoned with Guérande sea salt, andouille was first cooked by local butchers in the town of Vire, and its distinctive earthy taste has contributed to the popularity of this French region with foodies. A staple dish in many Norman restaurants, this tasty sausage has been perpetuating the traditions of gastronomy in the region for centuries. Enjoy it cold with farmhouse bread or warm with a salad, caramelised onions or apples. For lovers of simple, rustic French food, sampling andouille is a must. (Vegetarians should go here!)

Cycling tip: Vire is located on the Tour de Manche, EuroVelo 4 and D-Day Beaches to Mont-Saint-Michel cycle routes. Why not visit the annual andouille festival late October/early November or visit a local producer to discover the secrets of its production?

4. Poiré in the Pays de Domfront (Véloscénie and Vélo Francette) 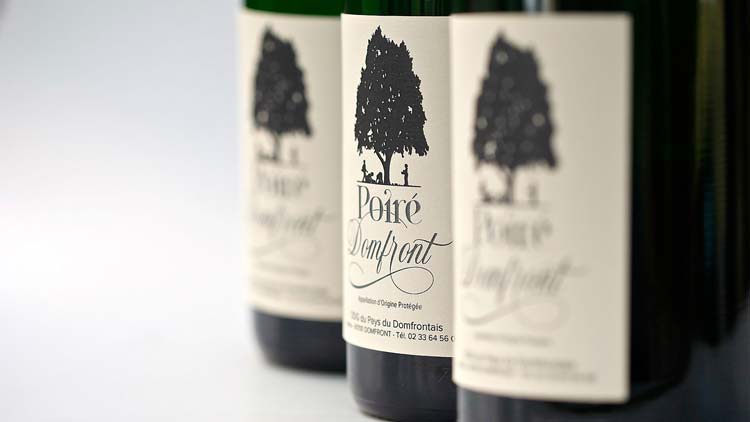 Poiré (or perry) is apple cider’s more refined cousin. A pale yellow, lightly sparkling beverage, poiré may not be as popular as cider but it is known as ‘Normandy’s answer to Champagne’ thanks to its light, bubbly character. Poiré has been produced in Normandy for hundreds of years, with the first records of pears growing in the region date back to the 11th century. With more than 100,000 pear trees and almost 100 varieties, the Pays de Domfront produces around 25,000 tonnes of pears that are then used to make poiré.

Cycling tip: Domfront is right on the crossroads of the Vélo Francette Caen to a Rochelle bike route and the Véloscénie, the official Paris to Mont-St-Michel cycle route, so it's a natural overnight stop-off. You can sample the local tipple at a poiré farm such as the Ferme des Grimaux. Don't forget to save time to explore Domfront’s beautiful medieval town centre – beware the hill, though the views (as always) are worth it. (See here for more things to do on the Véloscénie). 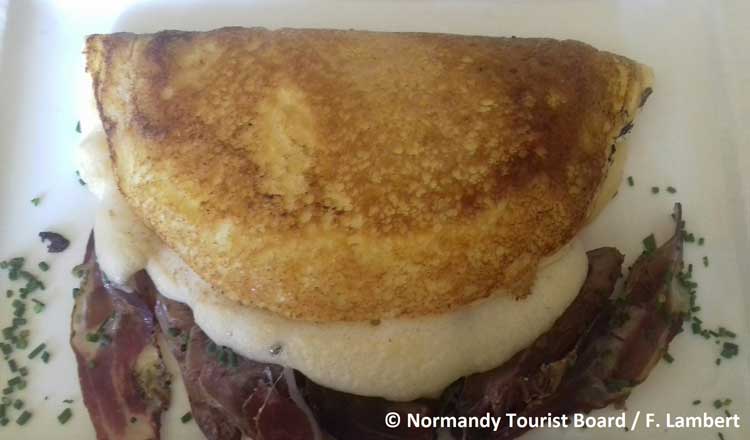 The Restaurant de la Mère Poulard on the Mont-Saint-Michel is something of an institution and its famous fluffy omelette is the stuff of legends. Founded in 1888 by Annette Poulard, the restaurant was originally an inn where pilgrims visiting the mount would stay, and among a multitude of other delicious dishes, she would make them an omelette over a wood fire. To this day, chefs at the restaurant still follow her secret recipe, and visitors from all over the world come to the restaurant to sample Mère Poulard’s omelette, roast lamb, fish, seafood, and other delicacies.

Cycling tip: The Mont-Saint-Michel is conveniently situated at the end of both the Vélocénie Paris link and the D-Day Beaches Mont-Saint-Michel cycle route, and is also on the EuroVelo 4 and Tour de Manche cycle routes, so there’s plenty of scope to incorporate an energy-boosting omelette into your itinerary. 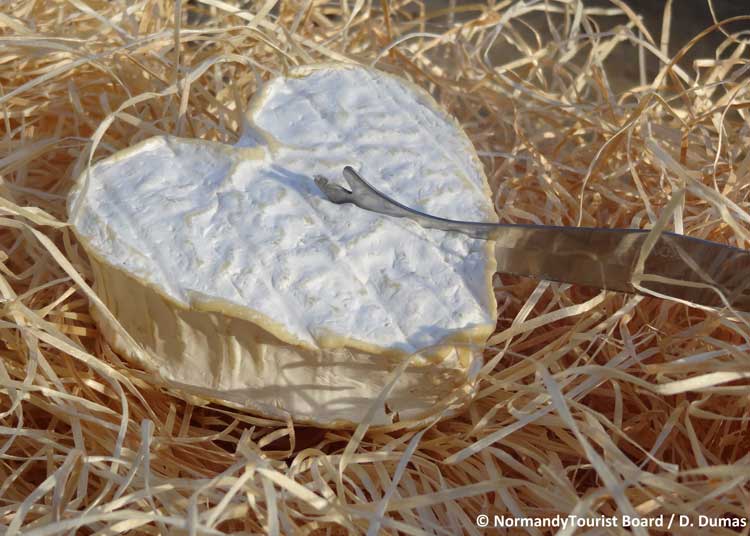 Made from cow’s milk, this soft, slightly crumbly, mould-ripened cheese is one of France’s oldest varieties, dating back as far as 1035. Usually sold in the shape of a heart, legend has it that the young farm girls of Neufchâtel-en-Bray fell in love with English soldiers during the Hundred Years War and started making heart shaped cheeses for them to show their affection. Neufchâtel’s taste and texture is reminiscent of its more famous cousin Camembert, only with tones of nuts and mushrooms, and it's the perfect accompaniment to a glass of cider or red wine.

Cycling tip: Neufchâtel-en-Bray is on the Avenue Verte route, about 35km inland from Dieppe. Why not go for the full-on cheese experience and visit the annual Neufchâtel-en-Bray Cheese Festival held every autumn, or see how Neufchâtel is made at one of the local cheese factories? 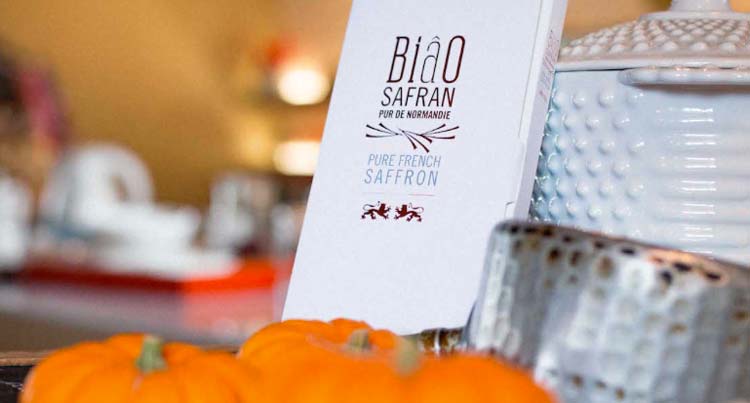 Saffron production became very important in the 17th and 18th centuries in France, and between then and now, several saffron farms have cropped up in Normandy. The Domaine de Gauville is one such farm. Founded by Myriam Duteuil, who in 2014 quit the hustle and bustle of Paris to embark on a more rural way of life, this organic saffron farm has gone from strength to strength, and Myriam’s delicious saffron is even served up at restaurants in the area. Take a guided tour of the farm, enjoy a saffron?themed weekend away in Myriam’s gite, do a saffron cooking class, and take full advantage of all the tasty saffron treats on sale in the farm shop!

Cycling tip:The Domaine de Gauville is located just 8km off the local Voie Verte d'Evreux Au Bec-Hellouin, a cycle track that runs from Evreux (which has direct train links to Paris) up to the town of Pont-Authou. You can also stay at the hotel restaurant Le Logis de Brionne on your way back to the cycle route and try Chef Alain Depoix’s famous scallops, prepared with saffron from the farm.

8.   A seafood platter in Ouistreham (Vélo Francette and EuroVelo 4)

There’s no better place to enjoy all that the sea has to offer than on the coast, and when it comes to seafood, Le Channel in Ouistreham has it all sussed out. This restaurant, situated just five minutes from the ferry terminal, has brought together an impressive medley of mouth-watering dishes, such as oysters with shallots, mussels served in a choice of wine, cider or camembert sauce, and of course, the flagship seafood platter – all caught that day. Always happy to recommend a calvados aperitif or small glass of pommeau to go with your scallops, manager Pascale Charpentier and her team give a warm welcome and a wide selection of all the Norman classics.

Cycling tip: Ouistreham is at the end of the Vélo Francette La Rochelle to Caen route, as well as on the EuroVelo 4 Central European route – and it's a perfect stopover for anyone coming in and out of France via the ferry port.

Mortagne in the Perche Regional Natural Park is surely the world’s black pudding capital. Said to be the oldest refined meat product in Europe, the story goes that boudin noir – which the French call their superior version of black pudding – was first made by ancient Celts out of the blood of their enemies. When it’s done right (as it certainly is in Mortagne), boudin noir is gloriously rich, tender and flavoursome, and thanks to the Black Pudding Festival, which has been held in the town every March since 1963, it is well and truly an integral part of any Norman menu. It even has a dedicated fraternity with their very own robes: the Brotherhood of Black Pudding Knights.

Cycling tips: Mortagne-au-Perche is situated just 2km off the Véloscénie cycle route where it passes Saint-Langis-lès-Mortagne. Spend the night at the beautiful former courthouse, the Hôtel du Tribunal and try Chef Freddy Pommier’s delicious take on the famous boudin noir of Mortagne. 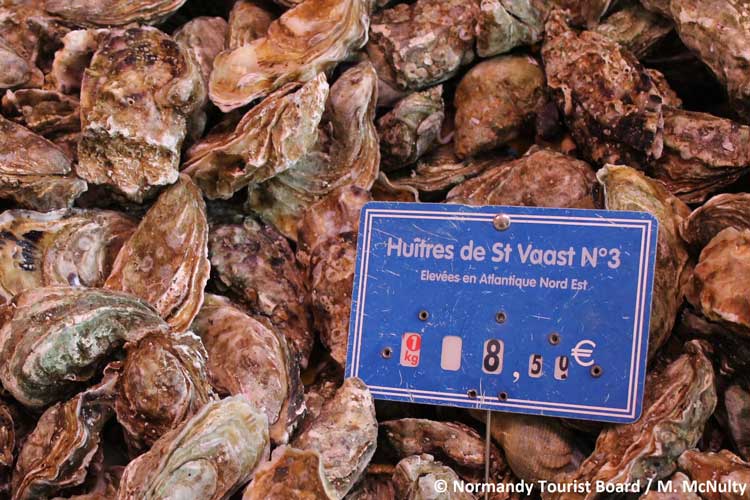 Did you know that oyster farmers in Normandy produce roughly a quarter of all oysters produced in France? If you’re a lover of oysters, Saint-Vaast-la-Hougue in the north-east corner of the Cotentin Pensinsula is a particularly good place to go. Saint-Vaast oysters are well known for their subtle nutty flavour, and are delicious eaten raw, whether with zingy lemon juice or sharp shallot vinegar. Particularly popular in the winter months, no Christmas table in Normandy is complete without them. In summer months, local oyster farms run tours of the oyster farms in the area, and visitors flock to the pretty harbour area of Saint-Vaast to enjoy oysters outside on the restaurant terraces.

Cycling tip: Saint-Vaast-la-Hougue is located on the EuroVelo 4 cycling route and is the perfect place for an overnight stop-off. Enjoy oysters at Le Débarcadère, enjoy the views out over the harbour and taste the sea.

Where to stay in Normandy

Match your route to our bike-friendly accommodation map below.

See here for how to survive France as a cycling vegeterian. We have this page on campsite cooking (and these recipes), plus this overview of French gastronomy for cyclists. See here for stacks of cycling inspiration for Normandy.

Liked this article? Please share it with your friends to help us spread the cycling love.