The History of the Nantes-Brest Canal

Wendy Mewes, author of the excellent Nantes-Brest guide for cyclists, has this history of the Nantes-Brest Canal – one of the most pleasant cycle routes in France.

The Nantes-Brest canal runs right across Brittany from Pays de la Loire although it does not actually begin in Nantes nor end in Brest. The total length is about 365km, and it can be walked or cycled in entirety along a well-made towpath. You have to change sides of the water occasionally, but you won’t get lost and any changes of gradient, as locks take the canal up and down the contours, are gradual – it really is easy riding.

The canal was conceived for economic benefits in the 18th century, but it was not until Napoleon wanted secure inland transport between the military arsenals at Nantes, Brest and Lorient that funding was forthcoming. In 1804, planning began in earnest. Most of the route was to utilise existing waterways, with only 20% of the final canal being manmade, so the route is far from monotonous with wide, sinuous rivers and ever-changing scenery. Four major river valleys – the Loire, the Vilaine, the Blavet and the Aulne – and some minor rivers were to be connected by artificial sections, crossing hills by ladders of locks.

There were originally 237 locks altogether, but some have been lost, especially those in the area flooded to create Lac de Guerlédan and its hydro-electric station, which opened in 1930. The Musée de l’Electricité at nearby St-Aignan is well worth a visit for its endearing quirkiness and a full account of the building of the barrage, including old black and white films. Unfortunately the creation of the lake, cutting the canal in two, means it is not fully navigable for boats today, as no boat lift was installed, despite original promises. Many of the locks on each side of the lake have now fallen into disrepair. 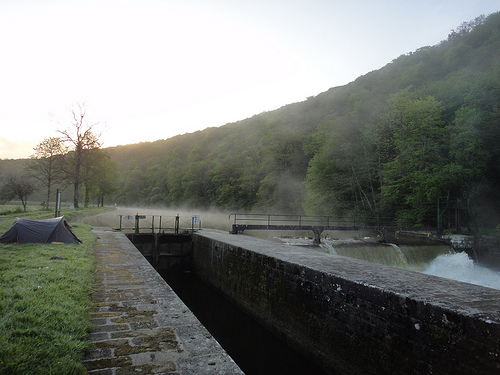 Just be careful where you walk when you pop out for pee in the night. Photo: Mathieu Dreo

The construction work was undertaken by local day-labourers in some areas, but the pay was very low and the work often too gruelling, so prisoners of war were used for the hardest tasks. Those from the prison at Brest built La Grande Tranchée, a 3.5km section near Glomel at the highest point of the canal (183.5m). They were housed in a makeshift camp and suffered appallingly through such dangerous work in disease-ridden conditions. There was no machinery, so labour was manual, and many accidents occurred as a consequence of primitive blasting methods.

Just be careful where you walk when you pop out for pee in the night. Photo: Mathieu Dreo

The enormous cost of construction was never recouped by economic profits in the transport of goods. The canal opened bit by bit in the 1830s and enjoyed a heyday at the end of the 19th century when up to 800 barges were involved in moving goods such as slate, building stone, sand and wood. Organisation and storage facilities were poor, however, and boats often made return journeys empty. One positive and lasting benefit was the transport of seaweed based fertilisers from the coast for the thin soils of central Brittany. 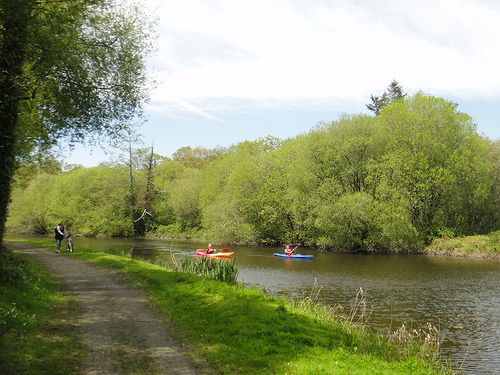 Cyclists sharing a peaceful stretch of the canal with kayakers. Photo: Mathieu Dreo

This area was traditionally very poor and remote from urban centres, so the canal made a big difference in the respect of improved communication too. But this method of transport could not compete with the speed of the rapidly developing railways, and then the increasing use of lorries after WW1. Once through travel was impossible with the creation of Lac de Guerlédan, things deteriorated further. The excellent Musée de la Batellerie (Waterways Museum) at Redon details the lost life of the bargemen, lock-keepers and their families in the 20th century. 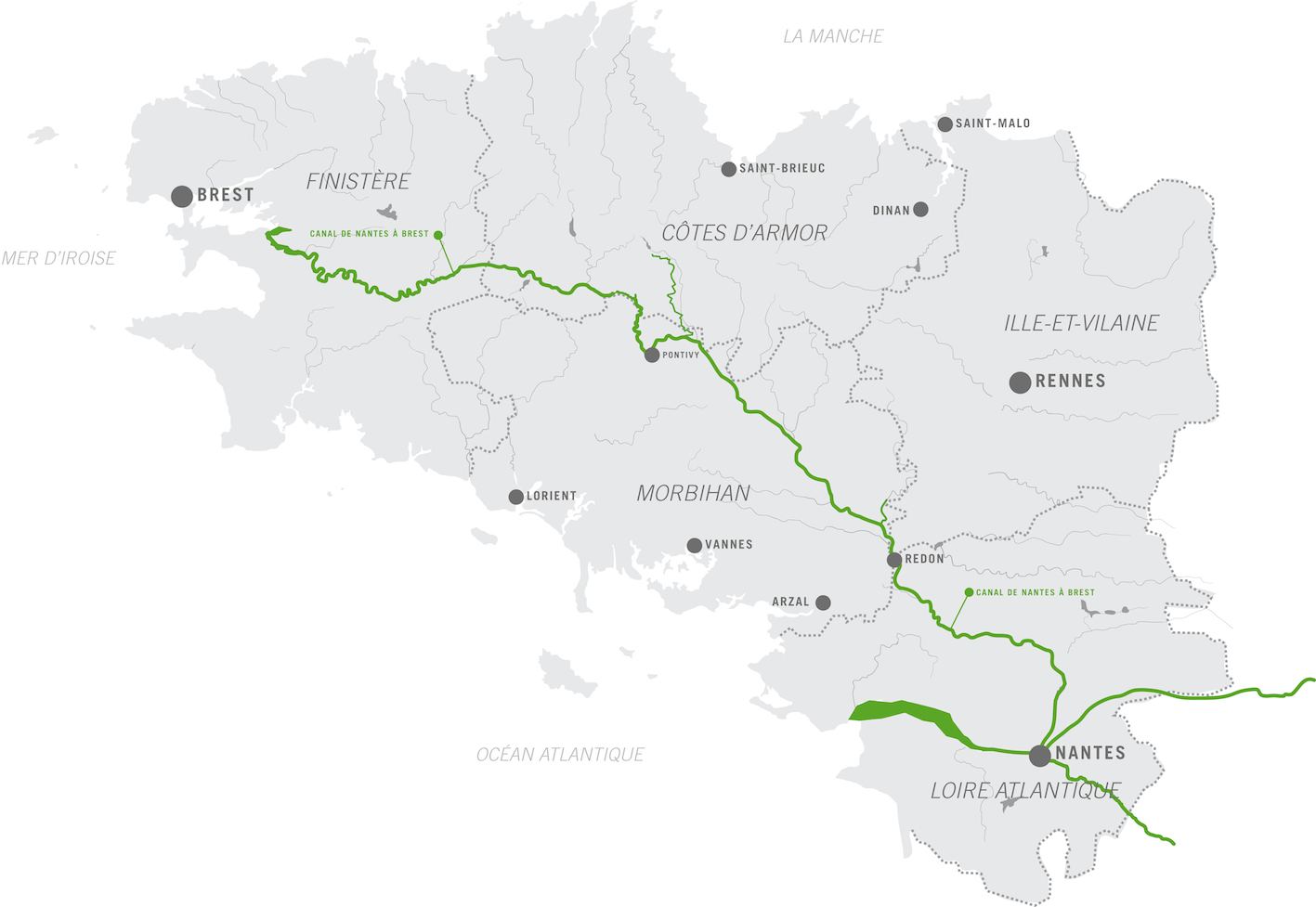 Map thanks to Canaux de Bretagne

But the canal still has a symbolic significance for Brittany today as it unites ‘historic Brittany’, which once included what is now part of the Pays de la Loire, Nantes and the department of Loire-Atlantique. Nantes, capital of Brittany for many centuries, and its surrounding industrial area were separated from Brittany by the Vichy government during WWII for political and economic reasons, and post-war territorial arrangements confirmed this. Many Bretons still routinely regard Nantes and Loire-Atlantique as part of Brittany, which can be confusing for visitors. The movement to reunite Brittany with its missing department often uses the canal as a focus for activities.

Today the Nantes-Brest canal is a major leisure resource, part of the greenways network in Brittany, and can be cycled at a leisurely pace in a week, or walked in little over two.

See Wendy's guide to cycling the Nantes-Brest Canal, as well as her regional overview of Brittany, and her profiles of St-Malo, Vannes, Brest, Quimper and Rennes.

Wendy Mewes is the author of eight books about Brittany, including the The Nantes-Brest Canal guide for cyclists an walkers, and the Footprint guide to Brittany (UK, US). She organises many walks and provides professional guided visits through Brittany Heritage Services. You can follow Wendy on Twitter @brittanyexpert The sun setting over the canal at Josselin, a perfect stretch along which to cycle in Brittany.
Photo: Martin Selway