A network of 14 cycle routes snakes its way around Europe – Andrew Sykes, author of a book about his journey along the Eurovelo 5 – has this introduction to the EuroVelo routes. 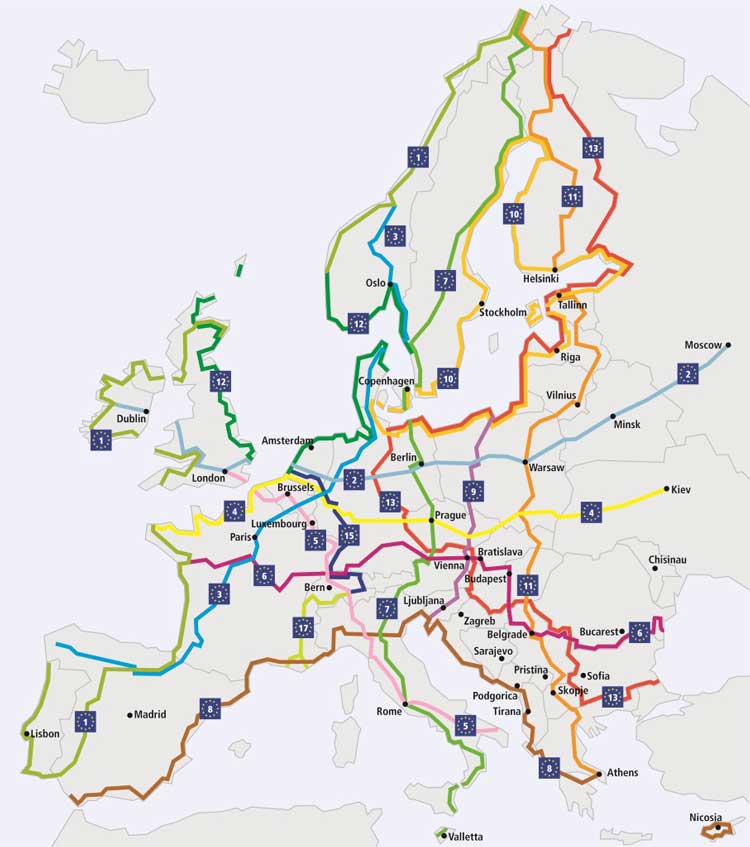 The EuroVelo long-distance cycle routes were set-up by the European Cyclists’ Federation (ECF), a Brussels-based organisation that brings together the various national cycling organisations that exist throughout Europe. There are currently 15 routes, numbered 1 to 17 (number 14 and 16 do not exist yet), with each also carrying a more descriptive name such as EuroVelo 12, The North Sea Cycle Route or EuroVelo 2, The Capitals Route from Galway to Moscow.

The extent to which the routes have been mapped and described varies greatly from route to route. With limited resources, the ECF encourages national and regional organisations to promote and develop the infrastructure of the routes. As a result, some of them have an impressive array of support materials available for prospective cyclists – the best example being the Rivers’ Route or EuroVelo 6 from Nantes to Constanta. It's well-mapped and has online support via a dedicated website – Eurovelo6.org – and published maps; on the ground, it's also signposted.

Other routes do not have this level of support. EuroVelo 5, the Via Romea Francigena from London to Brindisi in the south of Italy, for example, remains unmapped and un-signposted. The ECF had produced a brief overview of the route which states the main towns and cities that it passes through and also where it's possible to piggy-back on already established regional and national routes, but when I cycled EuroVelo 5 in 2010, I was left to fill in most of the route myself as I made my way south. (My planning and route descriptions can be found at CyclingEurope.org.)

EuroVelo 1, The Atlantic Coast Route, North Cape to Sagres (8,186km): From the very north of Scandinavia to Sagres in the south-west corner of the Iberian Peninsula, this is the longest of the fourteen EuroVelo routes.
Full route here

EuroVelo 2, The Capitals Route, Galway to Moscow (5,500km): An east-west route from Ireland across the UK, Germany, Poland and Belarus and on to the Russian capital.

EuroVelo 3, The Pilgrims’ Route, Trondheim to Santiago de Compostella (5,122km): There are many routes that lead to Santiago de Compostella in north-western Spain. The one chosen by the ECF for EuroVelo 3 starts in Norway and then heads diagonally across Europe, passing through France before heading due west along northern Spain. The French sections of this pilgrims' route are covered in John Higginson's The Way of St James: A Cyclist's Guide.
Full route here The famous 'pink onions' of Roscoff, which is the starting point for EuroVelo 4. Photo: Felix

EuroVelo 4, The Central Europe Route, Roscoff to Kiev (4,000km): This is the only route to be known simply by its number. Again, it's one that travels for much of its journey through France, across central Germany, the Czech Republic and Poland before arriving in the Ukrainian capital.
Full route here

EuroVelo 5, The Via Romea Francigena, London to Rome (3,900km): This is a route that I know well. It follows the ancient pilgrimage route from Canterbury to Rome, albeit slightly further east than the route walkers would take through France. The cycling route continues after the Italian capital all the way to the Adriatic coast at Brindisi.

EuroVelo 6, The Rivers Route, Nantes to Constanta (3,653km): This is most popular of the EuroVelo routes, with a wealth of information available to support cyclists as they head along the Loire Valley in France, through southern Germany and across Austria along the border between Slovakia and Hungary. It then heads south, taking a route across southern Romania to Constanta on the shores of the Black Sea. Cycling the River Loire by John Higginson and Cycling Southern France: Loire to the Mediterranean by Richard Peace both cover off French sections of this route. The Sustrans shop also has a dedicated guide.
Full route here

EuroVelo 7, The Middle Europe Route, North Cape to Malta (6,000km): The Middle Europe route is dominated by the two long countries at either end: Sweden and Italy. Between the two, the route passes through eastern Germany, the Czech Republic and Austria. Lonely Planet's Cycling Italy is worth checking out for related routes.

EuroVelo 9, The Amber Route, Gdansk to Pula (1,930km): The shortest of all the routes that cuts across Europe north to south from Poland to northern Croatia en route passing through the Czech Republic, Austria and Slovenia.

EuroVelo 10, The Baltic Sea Cycle Route, circular (7,930km): The first of the circular routes and second only in length to the Atlantic Coast route. It winds its path along the shores of the Baltic Sea from St. Petersburg in the east to Denmark in the west, from the border between Sweden and Finland in the north to the coast of Poland in the south.

EuroVelo 11, The East Europe Route, North Cape to Athens (5,964km): Like routes 1 and 7, route 11 starts at the northern-most tip of continental Europe at North Cape. So if you like your journeys to start cold and end hot, this is the one for you. It passes through most countries in eastern Europe before arriving in Athens.

EuroVelo 12, The North Sea Cycle Route, circular (5,932km): The second of the circular routes and a EuroVelo route that, along with EuroVelo 6, has a well-developed infrastructure. Courtesy of a few ferry journeys, it joins up the countries that share a coastline on the North Sea: the United Kingdom, The Netherlands, Germany, Denmark, Sweden and Norway. Bernie Friend's Cycling Back to Happiness is the story of one cyclist's experiences along the North Sea Cycle Route. The Danish section of the route is covered in a Bikeline map (Bikeline produces excellent cycle guides in English and other languages).

EuroVelo 13, The Iron Curtain Trail, The Barents Sea to the Black Sea (6,800km): This, along with EuroVelo 15, is a recent addition to the network of routes. Like the EuroVelo 11, its path is across the east of the continent but takes a route that is predominantly through Russia, Belarus and Ukraine before it arriving at the Black Sea. The Iron Curtain Trail is covered in a Bikeline guide of the same name.

EuroVelo 14, The as yet non-existent route (this is due to a N-S or E-W numbering methodology)

EuroVelo 15: The Rhine Cycle Route, Andermatt to Rotterdam (1,320km): Although a new addition to the network, The Rhine Cycle Route has existed in its own right for many years. It has a well-developed infrastructure both online and in maps, and is well sign-posted from the mouth of the great river in The Netherlands, along the border between France and Germany (where you can choose which side of the river you would like to cycle) before heading into the Alps to find the source of the Rhine at Andermatt, Switzerland. (It's still possible to get hold of John Powell's Cycling the Rhine Route, which provides some inspiration, although much of the practical 'where to stay/where to eat' content will be out of date (the boko was published in 2000). For this, you'll need Cicerone's new Cycling the Rhine River guide book. Bikeline has several guides covering the Rhine.
More info here.

EuroVelo 17: Eurovelo 17 was inaugurated in 2016. It is a combination of the Swiss R1 Rhone and French ViaRhôna routes. It totals around 1000km and heads south, connecting the Alps, Lake Geneva, the lavender fields of Provence and the wild white horses of the Camargue marshlands to the French Mediterranean sea on safe and quiet cycle friendly paths and roads. Mike Wells has a guidebook that you can use for tackling the route here.

Seven of the 15 EuroVelo routes pass through mainland France; these are Eurovelos 1, 3, 4, 5, 6, 8 and 17. For a cyclist interested in staying within the borders of France, the French portions of the EuroVelo network make excellent stand-alone routes. All but one of the six routes pass continuously through France. Only EuroVelo 5 in broken by a detour through Belgium and Luxembourg (although I chose an alternative route that straddled the Franco-Belgian border rather than heading to Brussels).

See our separate article dedicated to the French legs of the EuroVelo network.

Zoom into our map below to find accommodation on your route.

Sources of other information

The official site of the European Cyclists’ Federation gives some information about the network, but of more practical use are the websites dedicated to particular routes. There is also a EuroVelo map published by the ECF in 2008.

Each of the EuroVelos has its own dedicated section on my website, CyclingEurope.org, where you will find links to official websites, blogs, books, routes and discussion forums. If you would like to add any links, please contact me via the links on CyclingEurope.org and I will be happy to add them to the list.

Andrew Sykes is the editor of the CyclingEurope.org website, and the author of Good Vibrations: Crossing Europe on a Bike Called Reggie about his EuroVelo 5 bike ride. He lived for many years in various corners of France, initially working in the tourist industry before settling in Tours where he taught English during the 1990s. He returned to the UK in 1999 and now works as a Head of Modern Languages in a secondary school in Oxfordshire.