The Sarlat Voie Verte bike path from Sarlat to Cazoulès is a great day out if you're cycling in the Dordogne. 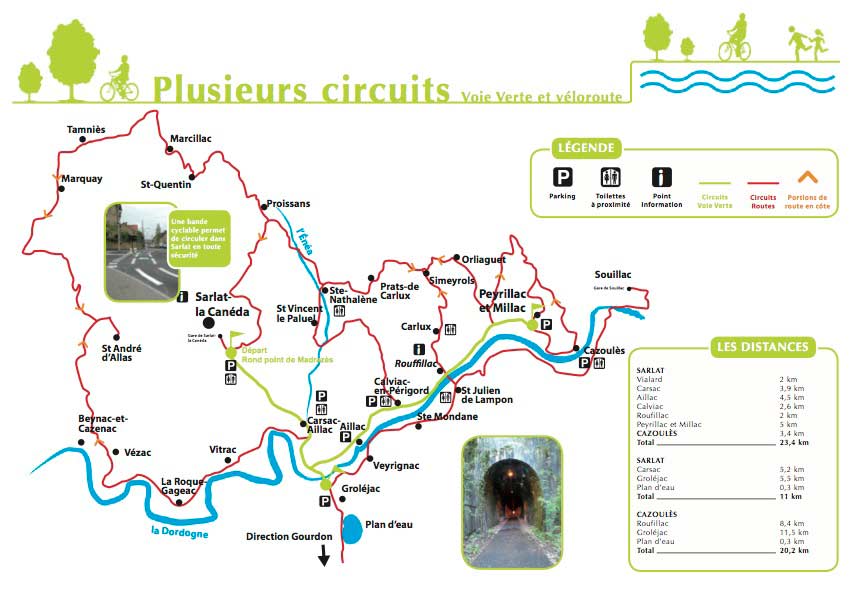 Map via sarlat-tourisme.com, where the map plus ride notes (in French) can be downloaded.

The Dordogne Valley is blessed with lovely bike routes for cyclists of all abilities (see here for our regional summary). The area in the south of the region (see here for the north) is a honeypot for tourism, especially in the summer, with the villages of Domme, La Roque Gageac and Beynac a hive of activity. The area also provides eash access to the nearby Vezere Valley with its world-renowned wonders both ancient and beautiful. (The area has almost 147 prehistoric sites and 25 decorated caves, and is on the UNESCO World Heritage List).

The Dordogne River itself attracts more than 3000 canoes a day, according to official tourist board figures, making the region a hotspot for outdoor activities.

And then, of course, there is the cycling.

The Sarlat Voie Verte is a lovely, flat bike path stretching for 29km from the region's medieval capital, Sarlat-la-Canéda, and running parallel to the river en route to Cazoulès. It's marked in green on the map above. 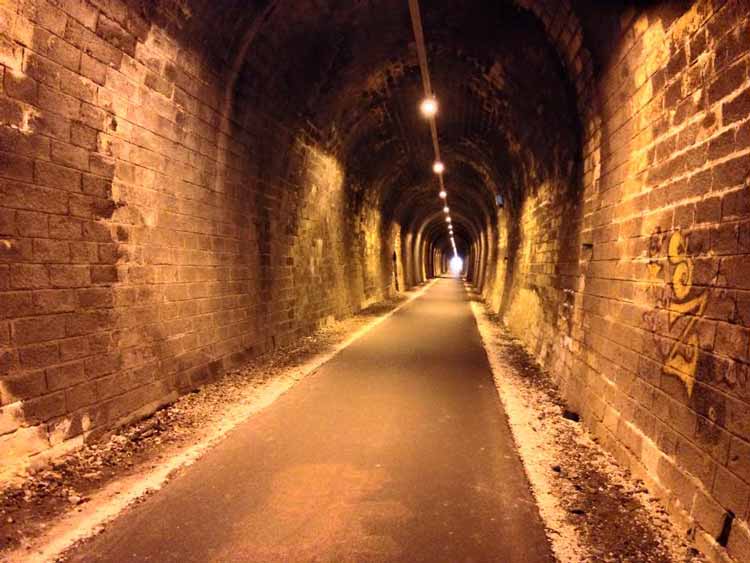 The super tunnel on the Sarlat to Cazoulès voie verte. Photo: cycle-the-dordogne.com

The area also has several other officially endorsed road routes (marked in red above) that take in the area's famous medieval and prehistoric sites. Also see here for another nice 60km road circuit written just for us.

The voie verte intersects with the other main road routes at a number of points, offering detours to main villages and townns and longer add-on loops, meaning the route could be ridden in a day or used as a base from which to explore extended routes.

As with all official voie verte or greenway routes, the Sarlat path is almost dead flat, and largely follows an old railway track that's been converted for recreational use.

The starting point is near the centre of Sarlat, and easily accessible for those arriving by train.

It crossed the Dordogne after just 7.5km, putting you in touch with the region's main artery and draw. From here, it continues along the valley parallel to the D703 until it reaches Peyrillac, where it links with a quiet rural road to continue on 3km to Cazoulès, and a further 3km beyond that to Souillac.

This is a lovely, protected route, with the path often cutting through the valley below ground level along a shady embankment. There's also a lovely long tunnel that for many (espeically kids!) is a highlight.

The bike path fully signposted and almost motor traffic-free, with road crossings rare (it mostly utilises underpasses), making it a safe route for all ages and abilities.

Bike hire in the Dordogne

Cycle tourists to the Dordogne are spolit for choice when it comes to bike hire. See our Aquitaine bike hire listings, and also the bike delivery services page – a number of firms will deliver to your door (or to the start of the bike path and pick the bikes up from the other end).

Organised cycling holidays in the Dordogne

Cycling accommodation in the Dordogne

See our Dordogne and Bordeaux bike-friendly accommodation listings of browse the pop-up map below for links.

See www.dordogne-perigord-tourisme.fr as well as the Sarlat Tourism office website at www.sarlat-tourisme.com. The Vézère Valley tourism website is at www.vallee-vezere.com.