Cycling the Roger Lapébie bike path from Bordeaux to Sauveterre

After a few years off the bike, Ravi Nookala gets back on to ride the Bordeaux-Créon section of the Roger Lapébie bike path to Sauveterre. 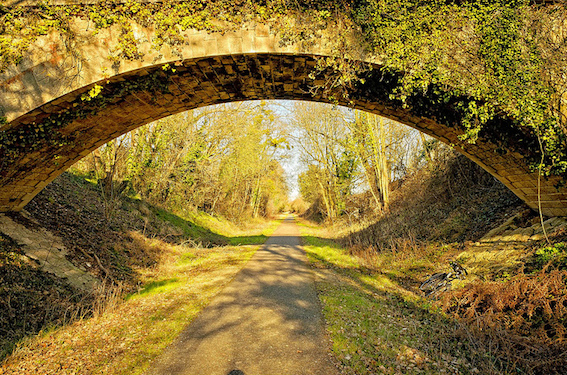 A few years ago, a friend of mine introduced me to cycling. Before then, it was just another sport that I didn’t bother with. So when I took up cycling, I wasn’t sure what I was letting myself into. I restored an old Raleigh that I picked up from a second-hand bike shop. I went for a ride alongside my friend who sported a flashy bike and some tight looking clothing. He disappeared in front of me in the thin Cambridgeshire mist and I was left gasping for air.

Sooner than I thought, I became one of 'them', a MAMIL. I bought an Orbea bike (I christened it Beryl), all the accessories and the Lycra outfits. I was enjoying cycling. Soon, I clocked up 1500 miles. And then we had our daughter.

Many things happened since and if you are interested in a ‘brief history of mine’, then you can catch it here.

Getting back on Beryl

Finally, after three long years, I took Beryl out in the mild Bordelaise weather. I had a choice of many routes ranging from 25km to 250km to Toulouse. ‘Let’s not get carried away, Beryl’, I said to myself. So, I decided to go for a introductory ride south of Bordeaux to Créon, a small town about 25km from Bordeaux, along the Roger Lapébie bike path.

Map via David DB on RouteYou

It started the usual way, a few side streets and then the main road. After about 5km, the cycle path turned off the main road and the ride felt a bit bumpy. Not being used to Lycra, combined with an uneven cycle path, equals a lot of discomfort at the bottom end. The cycle path undulated alongside the Garrone river and you can catch a glimpse of an occasional bird fishing (for this you need to be cycling slowly like I was). Soon, I had to cross over a busy national road and it didn’t appeal to me at all.

For about five more kilometres, I contemplated turning back as the path got quite a bit bumpier and the noise louder (big lorries, you see).

But then it happened. She was lying in front of me. Black. She looked newly laid. I could see her as far as the horizon. Straight and as flat as a pancake. The cycle path to Créon.

Unable to control the drool, I quickly lined up Beryl. And boy we rode or what! First, the cycle path cut through vines: endless rows of barren winter vines. Soon, I was in thick woods and the path become serpentine. Every corner I turned, I saw more tarmac stretching out for kilometres. I liked it.

I was clocking up speed despite the head wind. I heard a few shots of what could only be a farmer shooting pheasant. Soon, I hit upon civilisation and I was in Créon. Where did the time go? I was not ready to stop, I wanted to go further and further but I didn’t. I turned around and headed home. Just looking at the beautiful path that lay ahead, I got goose bumps. This time, tail wind. Oh Yes! I was cruising on the way back. Top speed almost 45kmph. Thoroughly satisfied with the route, I hit the main road again. And home.

It took me 1 hour and 38 minutes and I cycled an unplanned (and unexpected) 50km. Now, I walk like John Wayne!

Ravi Nookala was a cancer biologist in Cambridge, UK before moving to Bordeaux in search of the sun, the sea and fine wine. He clocked up close to 1,500 miles riding in the south-east of England, including an epic night ride to the Suffolk coast. Ravi is now enjoying riding the French countryside. He runs EnPro Language Solutions, which provides professional editing and proofreading services.

The Roger Lapébie bike path officially starts in Latresne, south-east of the city centre on the eastern side of the Garonne River. It runs for 57km from Bordeaux, through Créon and onto Sauveterre-de-Guyenne.

The best way to access the Roger Lapebie bike path from Bordeaux is to follow the river bike path to Latresne. (Ravi could have avoided the bumpy paths and big lorries by taking this route).

The full route map is included in this downloadable guide to cycling in Gironde (in French). The Bordeaux Tourist Office has maps of bike paths - or pistes cyclables - in and around the city. A region-wide maps is also available from the Aquitaine Torist Office.

Here's another, older, account of taking the bike path all the way to Sauveterre-de-Guyenne.

Zoom into our Aquitaine accommodation map to find hotels, B&Bs and self-catered accommodation that welcomes cyclists in or arond Bordeaux. You can search the Aquitaine listings in our Where to Stay section for more information on each.

We have a number of options for bicycle rental in Bordeaux covered in our bike hire in Aquitaine section. Bordeaux also has a bike share programme. See here also for companies that deliver bikes to your hotel or B&B.

A number of companies run self-guided cycling holidays in and around Bordeaux – see Bordeaux and Dordogne tours page.