Want to see Paris by bike? Local cyclist Mark Cramer has this insider's guide to 5 discoveries to make in Paris by bike. 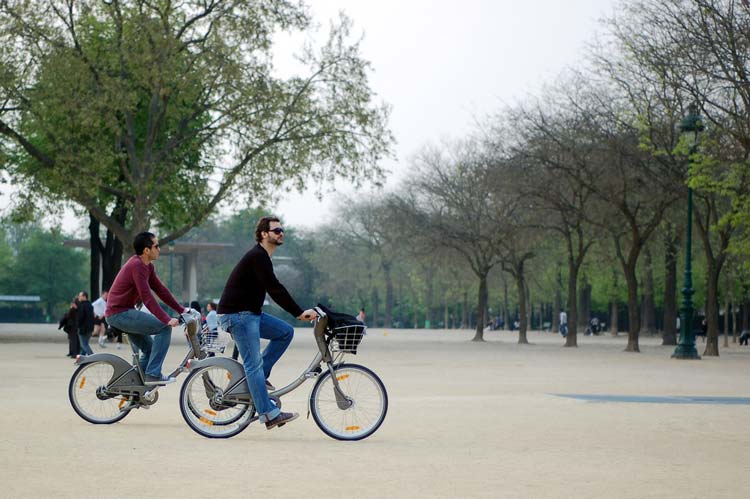 Click here for a downloadable map of bike lanes in Paris

Cycling purists may look down on those of us who relish cycling in Paris. Where’s the challenge, they may ask? Where’s the open road through nature? What about Airparif’s pollution warnings? What about the notorious traffic jams and gridlock?

We can’t alter the realité géographique, but you’d be surprised at the variety of refreshing experiences just waiting for the cycling adventurer. I’ll suggest five routes, but you can concoct alternative itineraries.

The Alpe d’Huez of Paris

Beginning at Metro Parmentier, the climb is mild at first, along the tight Rue Overkampf, allowing you to gather momentum while watching bobo bar goers hang out splendidly. Once you pass Bd de Belleville, the street name changes to legendary Menilmontant, and it gets mighty steep. Some sidestreets are outdoor stairways. The neighbourhood blends bobos with proletarians and the bars get funkier. To fight fear or fatigue, take a pit stop for legal doping: energising café or courage-inducing beer.

You’re on your way to the highest spot in Paris (and it’s not Montmartre at 426 feet). Turn left on Rue du Télégraphe and when you reach Rue du Belleville, you’ll be at the highest point in Paris: 485 feet.

Next comes the reward. Turn left downhill on Rue de Belleville, through Edith Piaf territory, and at Metro Pyrénées, turn right on Pyrénées. In about 200 metres you’ll be at the hidden wonder of Parisian nature, the multilevelled Parc des Buttes Chaumont, with rolling hills, waterfalls and a tall stone-arched bridge. It's Paris' largest (and steepest) public park. From the neoclassic observatory high above the duck pond, you can gawk at the other high place, Sacré-Coeur.

Begin at the circumference of Longchamp race course in Bois de Boulogne, west end of Paris. You can get here via bike paths from Trocadero.

The herd of fashion-keen cyclers does multiple high-speed laps around the outside of the race course. It’s tough to say which view is the most vibrantly colourful, the cyclist jerseys in tandem or the jockey silks of the race riders, flowing as fast as 40 miles per hour on glistening thoroughbreds.

If doing laps is not your thing, cycle through the crisscrossing wooded paths of Bois de Boulogne, all bicycle friendly. But beware to not bowl over streetwalkers peddling strange trade as they come out from the bushes.

Especially pretty are the Lac Superieur, Lac Inferieur and the Pré Catalan. And of course the Hippodrome de Longchamp, with free weekend entrance in the months of April and May.

Cross the city from the richest neighbourhood to the poorest, and beyond, with bike lanes throughout. Begin at Parc Monceau, framed by gilded mansions. Before you take off, admire feudal ruins, pagoda and Roman temple within the park.

Proceed eastward skirting the north side of Monceau. Not far past Place de Clichy, the bike path veers right onto the inside of a boulevard. You’ll soon be in the X-rated district, passing the Moulin Rouge and then Montmartre, both to your left. It gets gritty and grungy around here with a mix of tourists and street hustlers. Watch out for aimless pedestrians straying onto the bike path.

Upon arriving at the only remaining place in the world named Stalingrad, make a tricky left (or walk your bike over a crossing lane) to the Canal de l’Ourcq. This is the 19th Arrondissement, containing some of the poorest neighbourhoods of Paris, but rapidly gentrifying. Old factories and péniches line the canal until you arrive at the modernistic Parc de la Villette, a great hangout for students and families. You’ve now cycled 7km.

To finish off Paris Sociology 101, continue beyond the Périphérique along the same Canal de l’Ourcq into suburban Pantin, economically one notch below the 19th Arrondissement, where people who were priced out of Paris find cheaper apartments.

Canal de l’Ourcq goes on and on. You reach farmlands by sticking with the Ourcq bike path until the end, about an hour later and a half, just past the shady Forêt de Sevran. 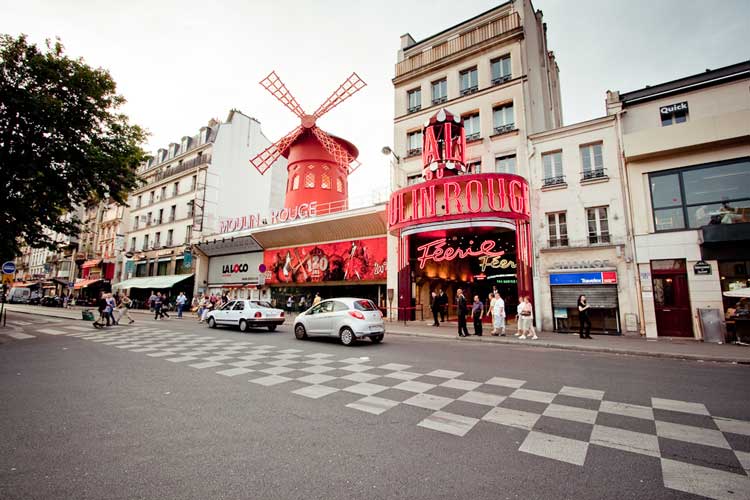 Begin at Place Stalingrad. Like the Sociology Route above, this trip is made up entirely of bike lanes, most of them protected, with a dazzling variety of scenery. Cycle south on the right-hand side of Canal Saint-Martin. Thanks to fine engineering, the calm canal water rises above the road at certain points!

When the canal moves underground, continue along Boulevard Richard Lenoir until Bastille. Once across the daunting Place Bastille (you may prefer to walk bike over crosswalks), continue on the bike path along Avenue Daumesnil, with beautiful red brick aqueduct arcades to your left.

Another stop if you wish, to climb atop the aqueduct, discovering a raised garden walkway called Viaduct des Arts.

At Town Hall, turn left for a few metres, then hang a right into what seems like a stone tunnel. You’re now entering the Promenade Plantée, a submerged corridor shared by cyclists and pedestrians, lined with hanging gardens, and romantic nooks with park benches. On a hot summer day, the temperature here plummets to comfort level.

The Promenade Plantéé will take you all the way to the Bois de Vincennes, the immense forest on the east side of Paris. Following a mild climb to the end of the Promenade Plantée, turn left for a block until Porte de Saint-Mandé.

Turn right on a street with no bike lane for two short blocks until you enter the forest. Swoop down to the beautiful Lac St-Mandé. Follow signs to the immense fortress, Chateau de Vincennes, with gothic cathedral and expansive moat. Then continue to the Maison Rouge gardens and art gallery and the extraordinary Lac des Minimes, with three bird-haven islands of wild vegetation.

Have a lakeside picnic. You will have travelled nearly 11 kilometres. An optional continuation is to take Avenue de Tremblay south until the flowery Pont de Joinville. Left and down after the bridge will lead you to the exotic Bords de la Marne bike path and within a few hundred metres, some attractive riverside guinguettes. The bike path continues along the Marne.

But on Sunday the air is clear. If you get up early enough you’ll be the king or queen of the road and the visual splendor of Paris will be magnified by the silence, with only an occasional car and no trucks: no threat from ozone, nitrogen dioxide or diesel particles. Take a deep breath and do your a la carte Tour de Paris. The riverfront is car-free on Sundays.

More ideas for cycling in Paris

Mark Cramer has written this article on great day and overnight trips around Ile-de-France that are accessible from Paris, plus this guide to getting out of Paris by bike. See also Bruce McAleer's Cycling Fontainebleau to Milly for a lovely dayride outside of Paris. 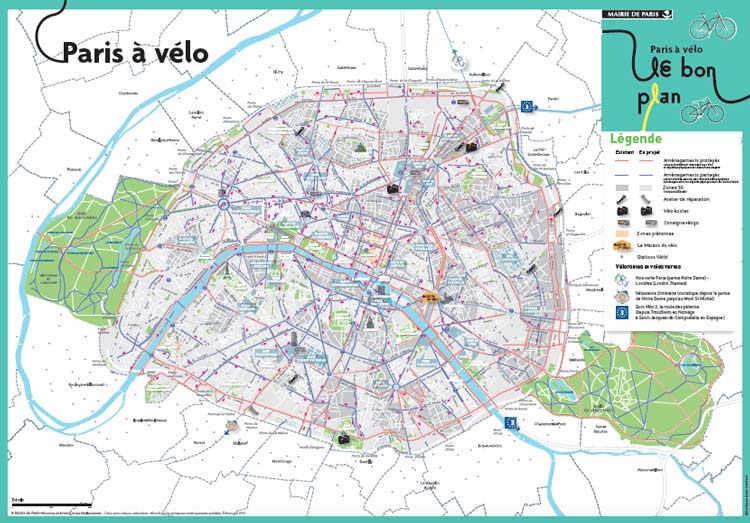 A free hard copy Paris à Vélo map like the one above is published by the Mairie de Paris and is available at all tourist information centres. There is also an online database of all Vélib' stations.

For general planning and orientation in Paris, see IGN's street maps. Michelin has a 'Paris environs' map that includes Chatres and Fontainebleau.

For tourist guidebooks to Paris, see Lonely Planet's city guide or their 'best of' guide. The excellent and independent Stanfords Travel Bookshop in the UK has a full range of maps nad books and delivers worldwide.

Bicycle hire in Paris and cycling accommodation in Paris

You can read more about how years of campaigning by cyclists ultimately led to a more cycle friendly Paris on our guest blog by campaigner Audrey de Nazelle. You can also take our cycling in Paris safety quiz.

Mark Cramer has written books on social ecology, off-beat travel, and adjusting to foreign cultures. He does animated speaking engagements on these and other themes, with bicycling as a leitmotif and France as the context. In 2012, he rode 200km from south of Orléans to the Longchamp racecourse in the Bois de Boulogne to raise money for Crohn’s disease and ulcerative colitis. He's also written for Freewheeling France about cycling the Loire from Laval to Renazé. In part one of this cycling in Ile-de-France series, he wrote about how to get out of Paris by bike. You can reach him at cramerjazz@gmail.com