Every August, cyclists take to France's most famous car racing track for the madness that is the Le Mans 24-Hour Cyclosportive. For some reason, I thought it was a good idea to join them. Here's how I got on.

France is home to some of cycling's most challenging rides: the Haute Route (see here for a first-hand account), a swathe of Tour de France cols (this website is a good place to start), the Raid Pyrenees. There are a host of sportives for people wanting to test themselves and their bikes against France's toughest terrain.

At first glance, the Le Mans 24-Hour Cyclosportive may not sound like one of them. After all, how hard can it be riding round and round a dead-flat car racing track?

Let me answer that for you.

a) The hint is in the name: it goes for 24 hours. Straight.
b) It's not "dead-flat". There is a (small) hill that seems to grow a little taller after a few laps.
c) If it wasn't at all hard (or serious), it wouldn't attract people riding bikes like this: 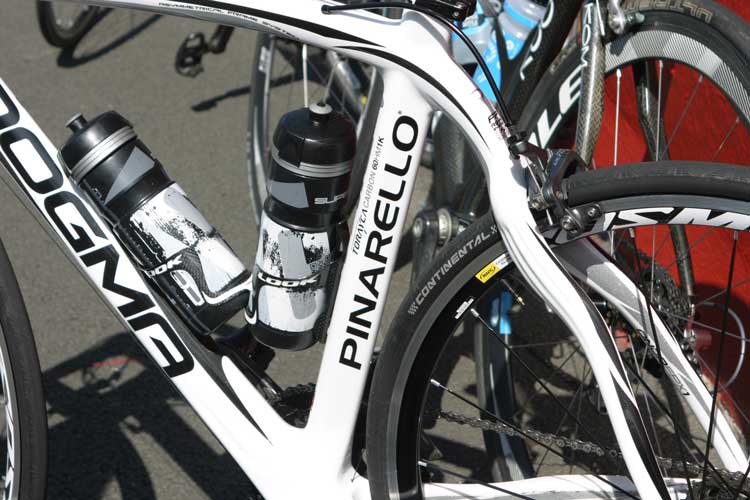 Yet this isn't a snobby or exclusive event. Perhaps because the track *is* (almost) flat, it attracts a wonderful mix of hard-core cyclists who keep the main peloton moving at well above the 50km/hr mark, as well as everyday riders pottering around on flat-bar hybrids and even mountain bikes.

One extremely tall man was riding this rather wonderful machine: 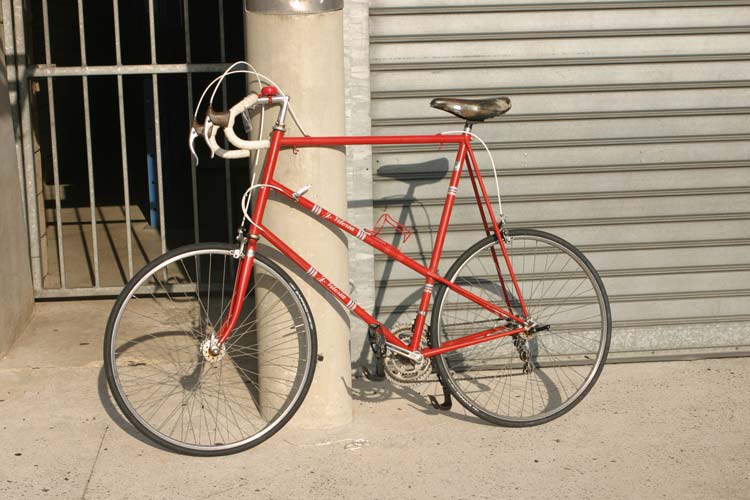 How seriously you take the event is up to you, but over the course of the weekend it was possible to deduce a rider's level of competitiveness by observing:

a) Whether or not they sustained themselves on pot noodles, crepes and energy gels for the entire 24-hour period, and stole two hours' sleep in a tent brought on the back of a bike (like I did)
or
b) Whether they arrived in a camping car towing a trailer with a double mattress and enough food to sensibly sustain themselves for a 24-hour bike ride (like I did not).

What exactly is it?
The Le Mans 24H Velo is a timed sportive at the Bugatti Circuit in the Sarthe department of Pays de la Loire.
If you need a few training rides beforehand, Le Mans is roughly in the middle of the 400-odd kilometres of itineraries that make up the Sarthe à vélo network (based largely on the V44 Alençon-Le Mans-Sablé-La Flèche bike route).

How far do you need to cycle?
The goal is to cycle as many laps of the race track as possible in 24 hours. The full 'Circuit de la Sarthe' race track is just over 13.6km long, but the 24-hour sportive (thankfully) uses the smaller 4185m Bugatti Circuit that sits within the main race track.

Is it *really* flat?
Yes, for the most part. There is a small uphill section as you leave the home straight, but the rest of the track is either slightly downhill or flat. It can be quite exhilarating (and at times scary) finding a line on the corners as the peloton closes in behind you.
Here's the elevation:

Do you have to ride all 24 hours on your own?
No. You can ride solo, in teams of two, four, six or eight. You can see the team configurations here.

How much does it cost to enter?
Registration for 2015 was €200 for solo riders up to €880 for teams of eight, with discounts for early bird entries (before February 28). See the website for updates and future fees.

What does registration include?
* Entry into the event
* Chip-based ankle band to electronically track your team's performance
* Entry to pit lane for your team and two supporters/helpers (you get allocated a garage to use as your base)
* Campsite entry from Friday to Monday
* Goodie bag (ours included a bidon, lights, energy gel, etc)

Here's the registration desks where you confirm that you'd like to go ahead with this madness, and where you pick up your electronic tag and goodie bag. 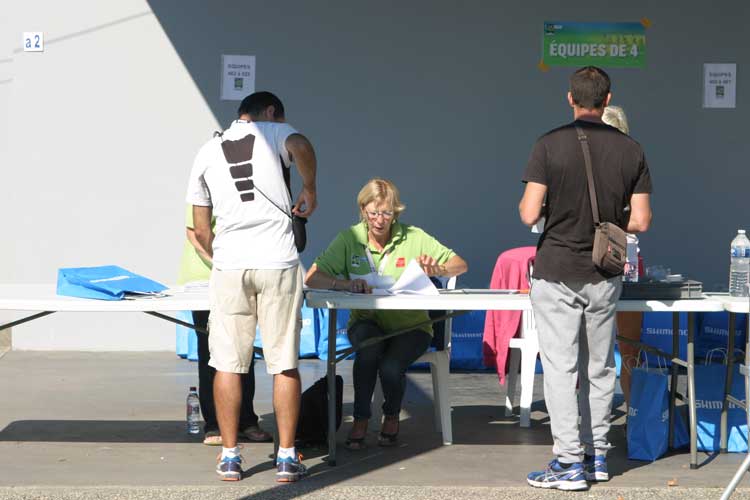 What else do you need to know?
As with most French sportives, you'll need a medical certificate confirming you're fit enough to ride in a competitive event and that you have no health problems. It can be in English, that's fine. You also need to take a cheque to give as a deposit when you receive your team's electronic tag. (You get the cheque back when you return the tag; in 2015 it was €75).

What do you need to take?
Yourself and your bike (with rear red light), plus a helmet and whatever (legal) stuff you need to get through the night. We took the basics as we'd all arrived by bike, but the more serious teams had blowup mattresses (and in some cases proper mattresses), exercise bikes, rollers, support crews with chalkboards to tell riders when to come in for a rest, and an endless supply of yummy-looking food. One rider from the Champagne region told me they felt like novices their first year, but that they had come fully prepared second time round (they had a trailer with supplies and a camping car); he clearly had me picked as a novice.

Enough of the formalities – how did we get on?

This is me all numbered up and ready to go. It felt vey professional. (This was before the semi-pro teams and serious club teams arrived in their matching outfits and with their high-spec Boardman bikes). 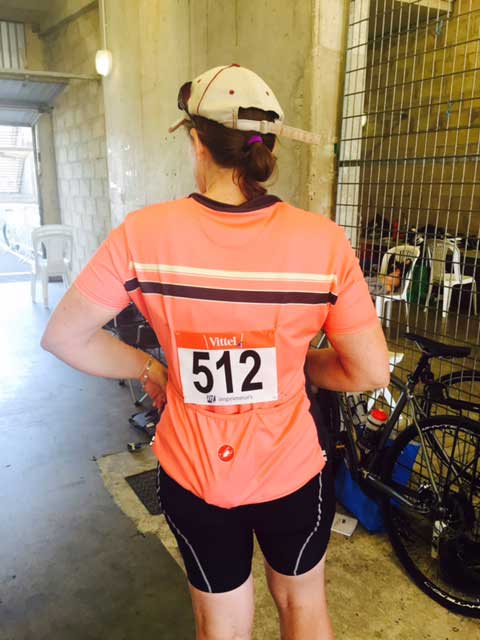 This is our team selfie prior to the start. Notice the distinct lack of matching outfits. We were entered into the 4-man category. Yes, it WAS called '4 Hommes Prestige' but we somehow sneaked in with 2 girls ... there's no 4-person mixed category, which seems a peculiar oversight. That's Will at the back, me, Scot and Fiona. Notice how optimistic we all look? I think this photo was taken before the professional-looking teams all arrived with their matching outfits and their matching bikes. 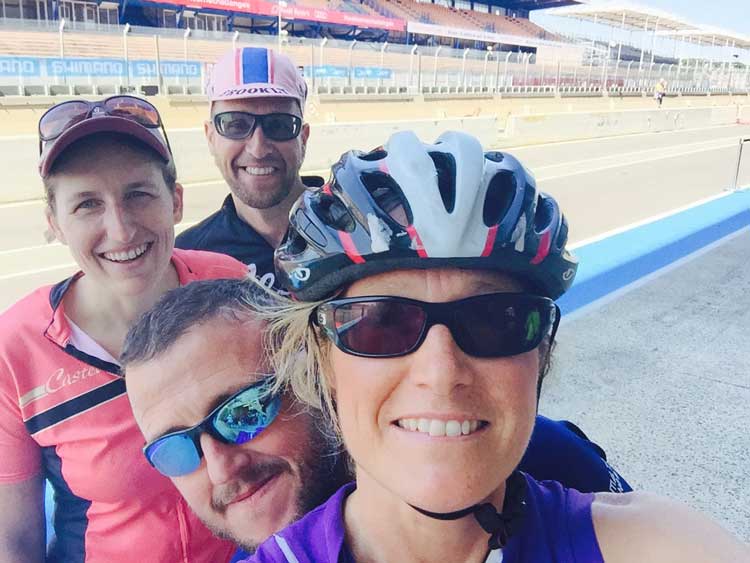 Scot had volunteered for grand départ duties the night before when we wrote down our team plan on a serviette over a few glasses of wine and dinner (yes, yes, I know, wine wasn't a very good way to prepare...). For no particular reason (because we really had no idea what we were doing or what to expect), we'd factored in one-hour afternoon slots followed by longer two-hour shifts overnight when we figured it wouldn't be so hot. 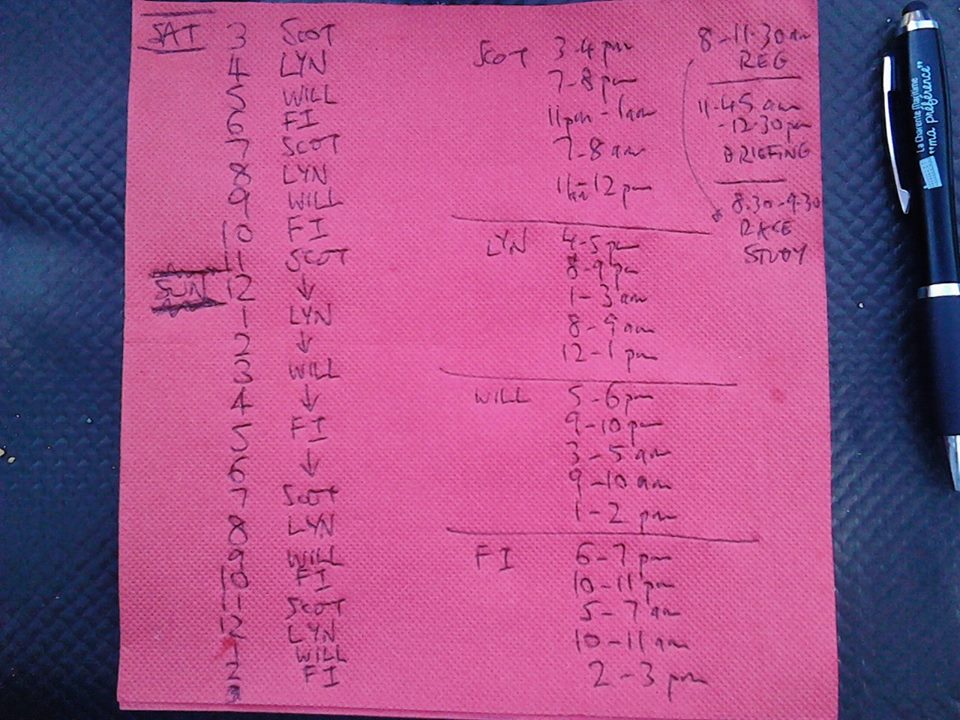 It's a running start, so the first riders line one side of the track while a team member props up the lead rider's bike on the other. Here's Will in charge of Scot's bike as the anthems ring out. 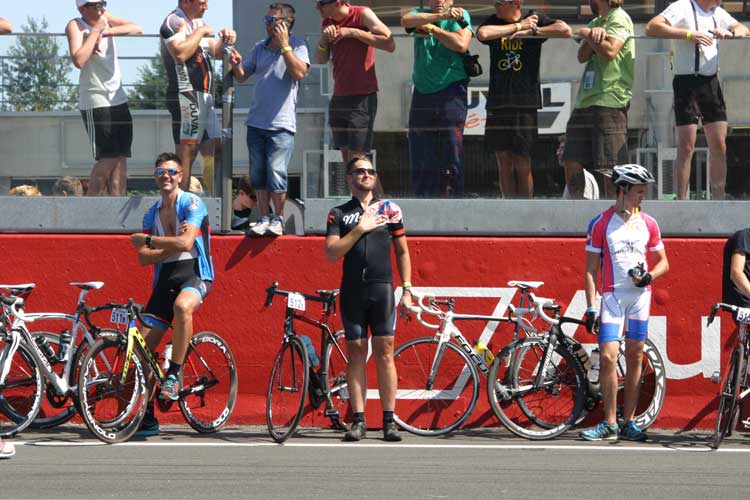 This is the relaxed look of a seasoned pro who's done it all before: 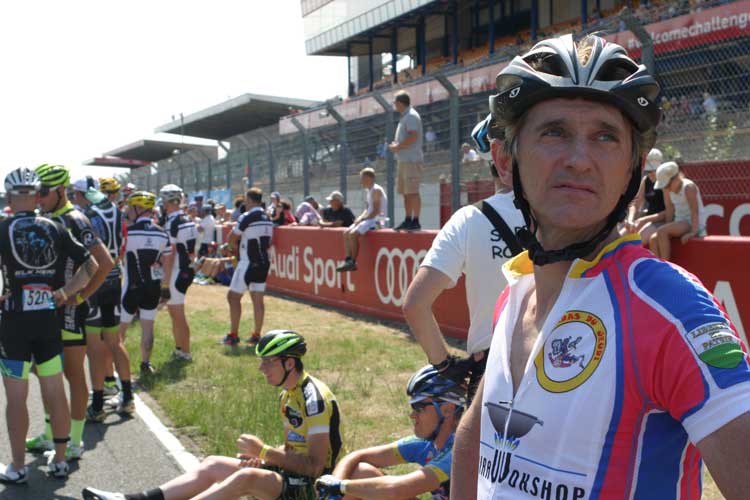 And these are riders who'd had the foresight to bring an umbrella-carrying friend to help save them energy in the baking heat. 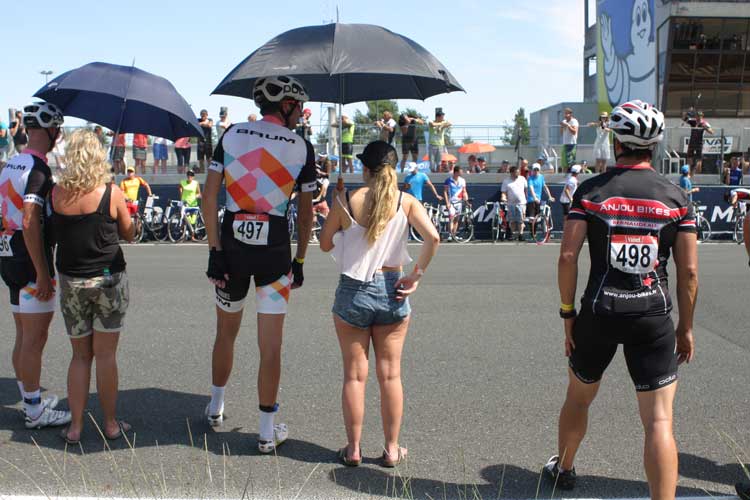 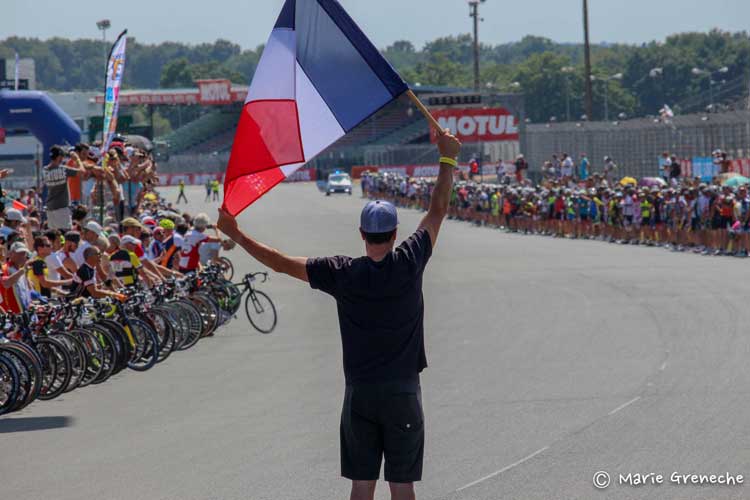 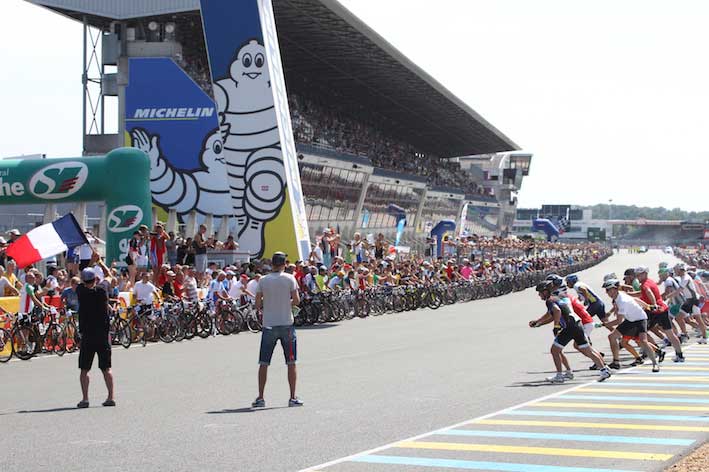 The first hour was tough. It was in excess of 35 degrees on the track; it was hot, hot hot. 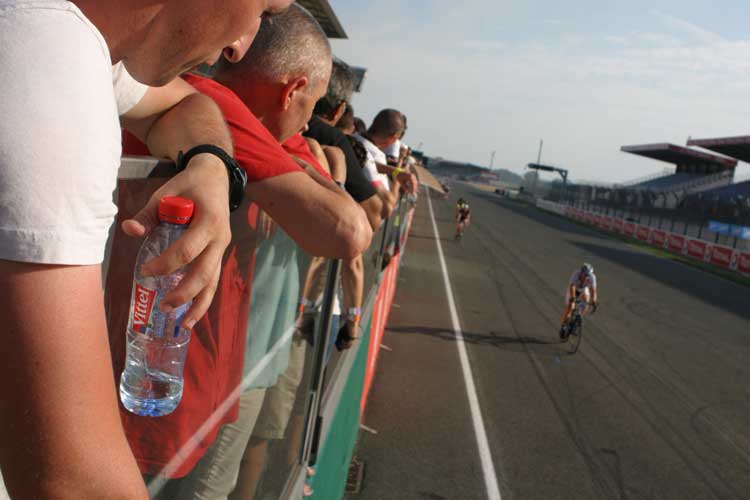 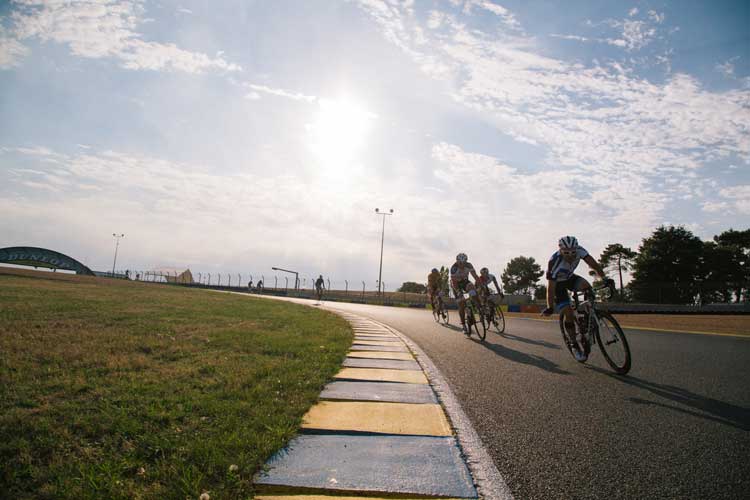 Here's what I looked like in reality as I pedalled down the home straight (again). 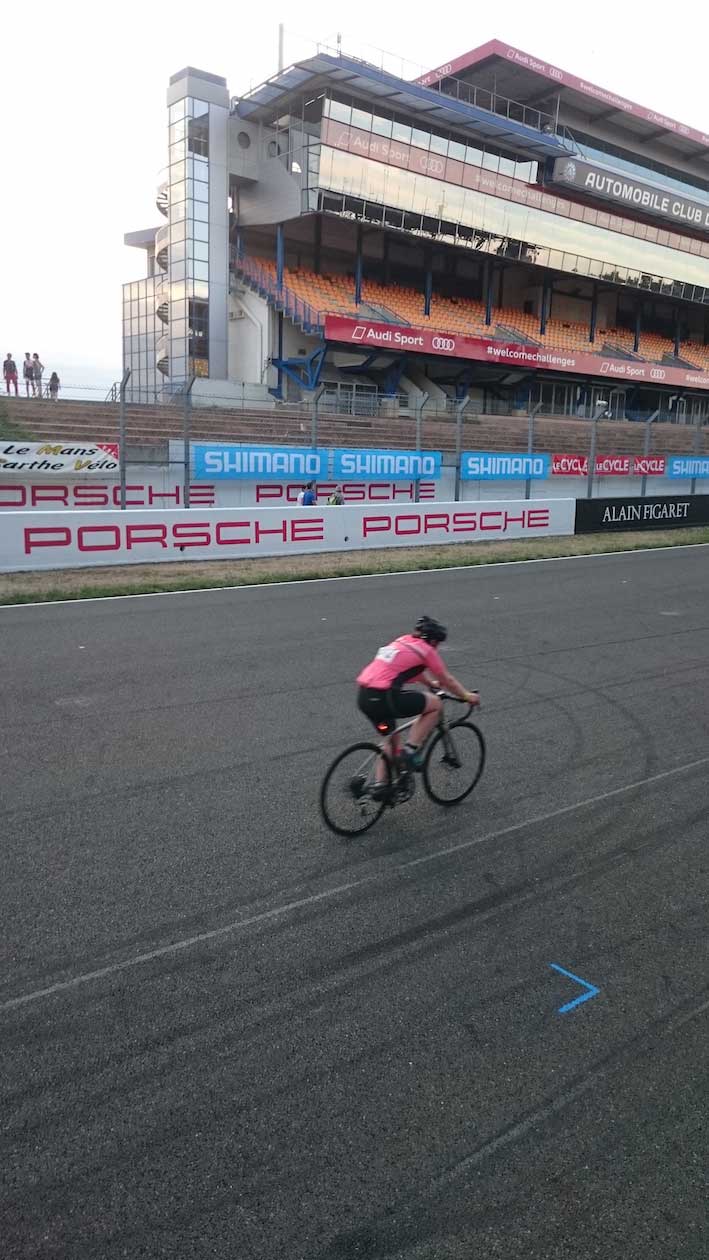 Still, we did OK. We weren't setting the rankings alight (we knew this because the TV screen in our shed told us we were coming somewhere down around 400th), but we had mastered the electronic tag changeover: 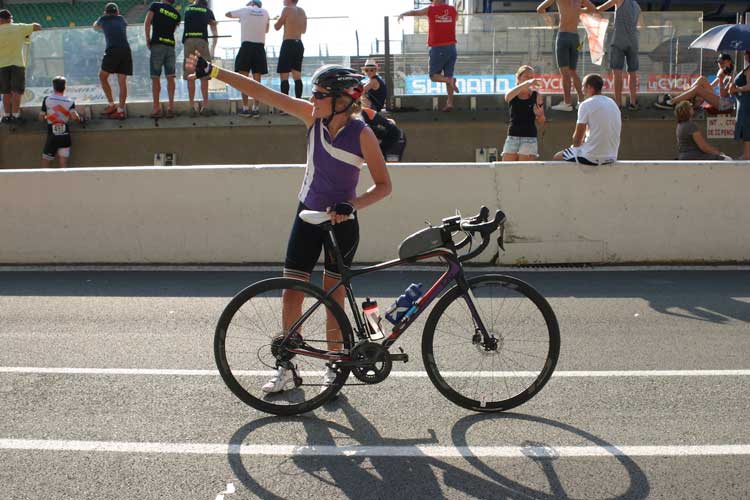 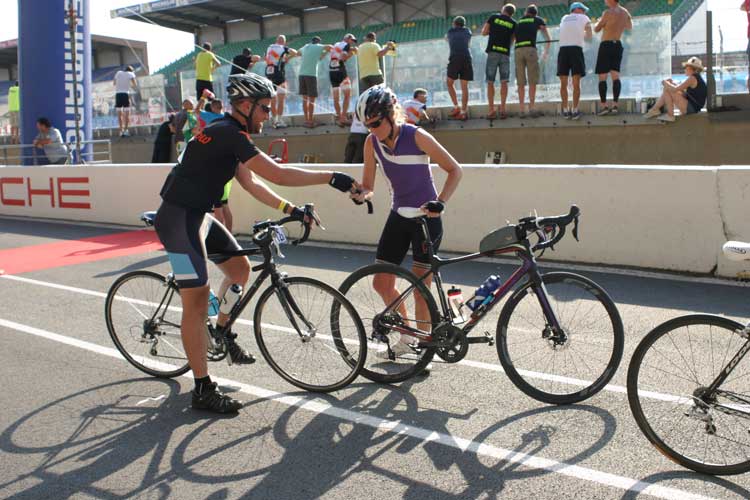 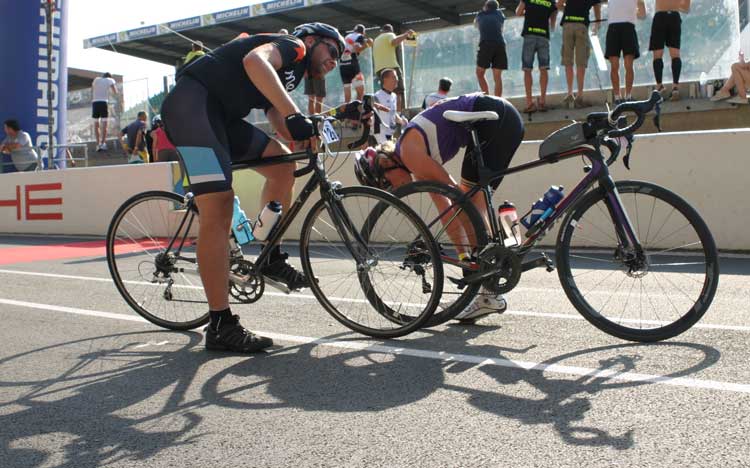 And we all enjoyed being out on the track at night time; riding with the track fully flood-lit was a real highlight. 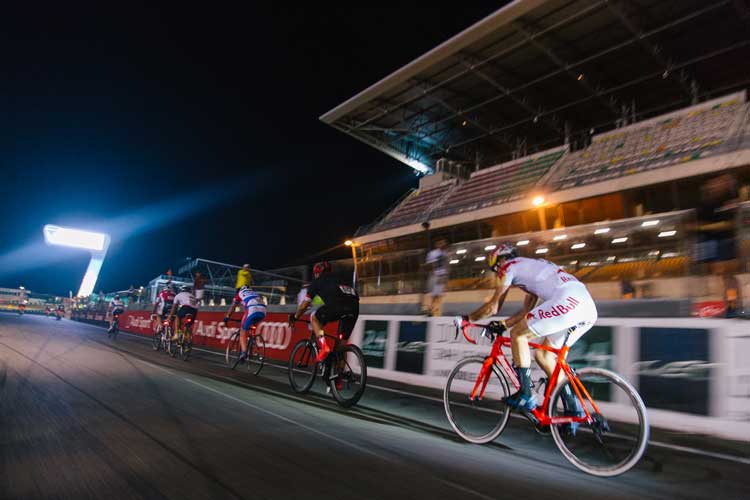 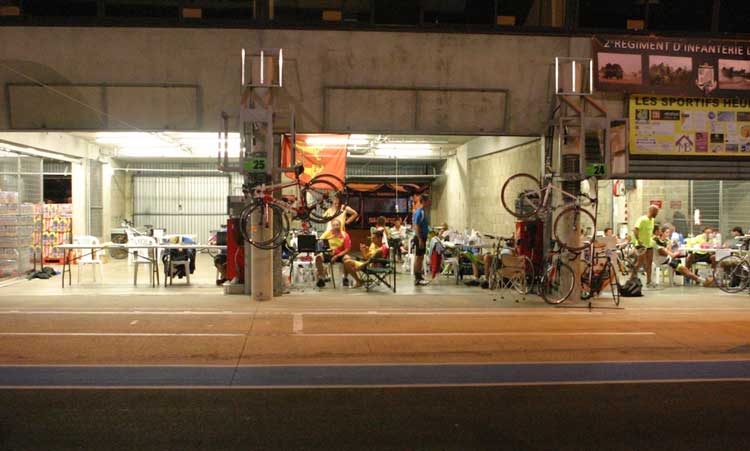 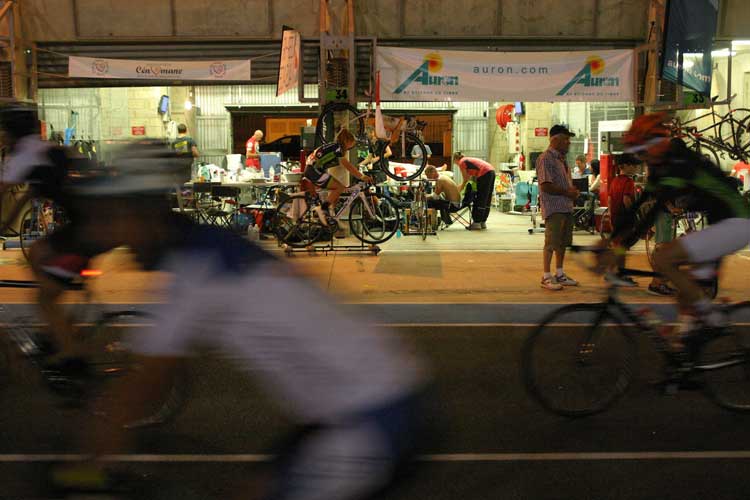 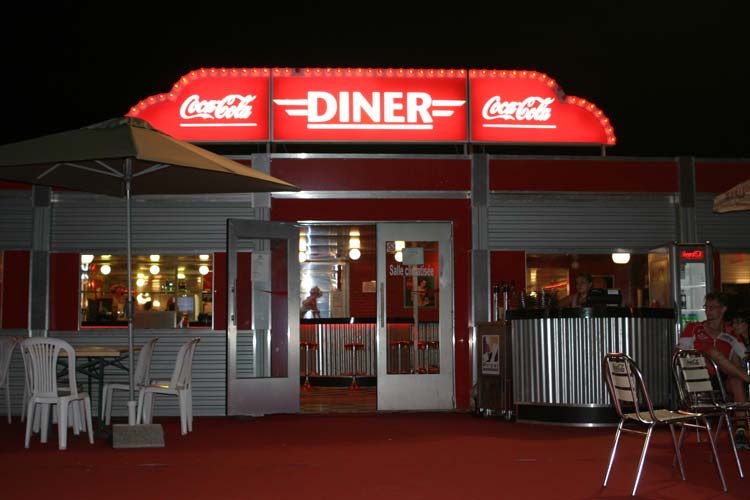 Luckily this wonderful woman was there serving crepes right through until 2 or 3am. Sophie, who owns this 2000 square metre saffron farm near Le Mans, served up a steady supply of crepes and coffee. They were delicious (especially after my pot noodles ran out). 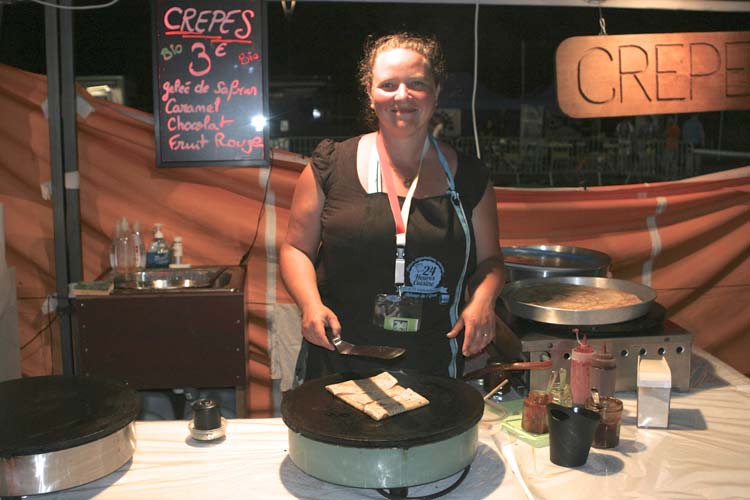 Riders who were 'off' tried to get some rest either over in the tents in the camping ground or in the shed. 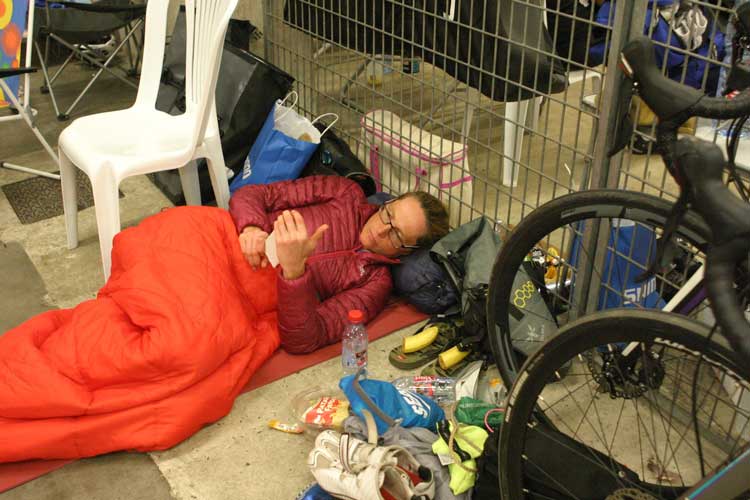 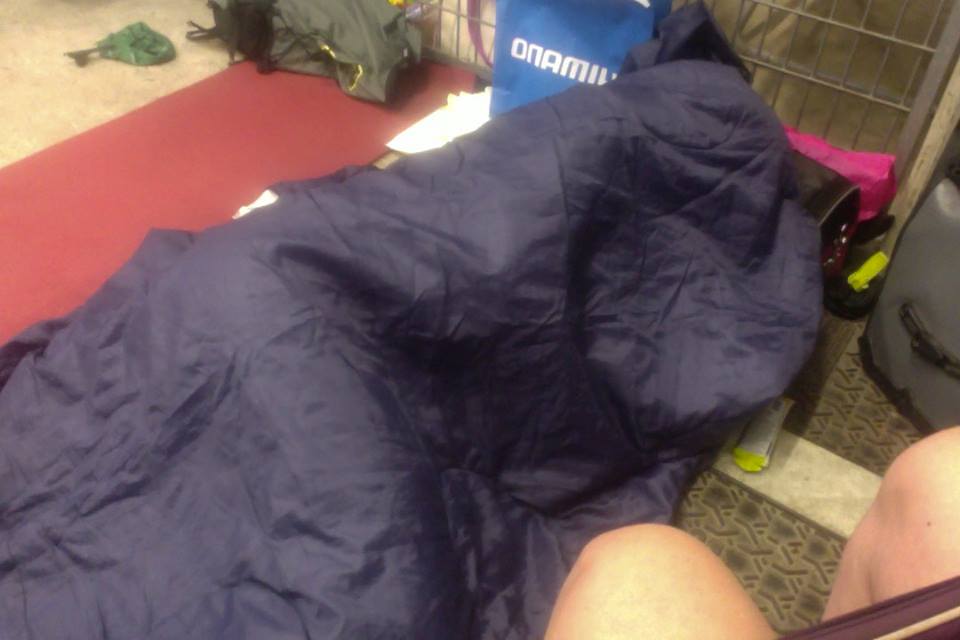 It was all calm before the storm.

Somewhere around 4am our serviette plan went out the window.
There was thunder, there was lightning, there was this: 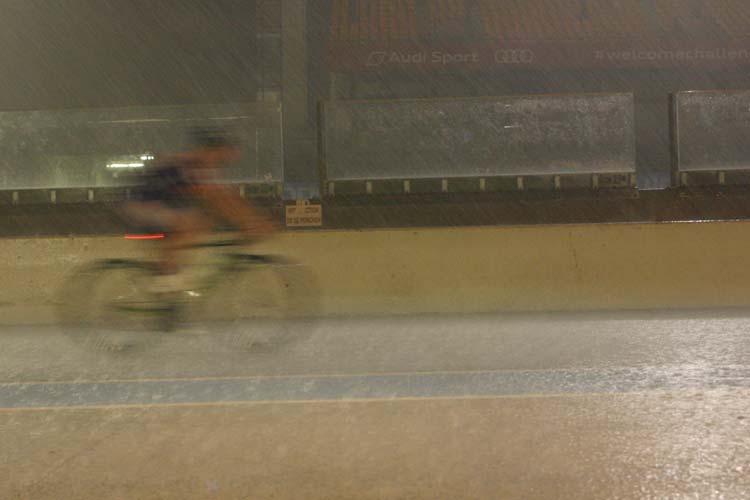 These hours were challenging. Fiona came in, unable to ride any further having caught the full brunt of the storm.  One-hour slots were reduced to 45 minutes as we tried to stay upright on the slippery track. The peloton, mind, motored on around the track with apparent ease, its buzzing sound as it approached only occasionally interrupted by the sound of carbon on tarmac.

The rain eventually cleared and the sun came out again for the final few hours. Our shed-mates in their matching outfits changed into new sets of matching outfits while ours dripped dried. Fatigue turned to exhaustion as 3pm neared. We did our final calculations and divided up the final few hours. I was running on empty; my final three laps – done not much faster than it took me to do six laps 20 hours earlier – were the most challenging of all.

I watched from behind the barriers as the clock ticked on. As the peloton swished by a few minutes shy of 3pm, the last lap bell rang out. Relief turned to celebration. We'd made it.

We may not have made it here with the S1NEO team that racked up 232 laps or 970.69km to claim overall victory. 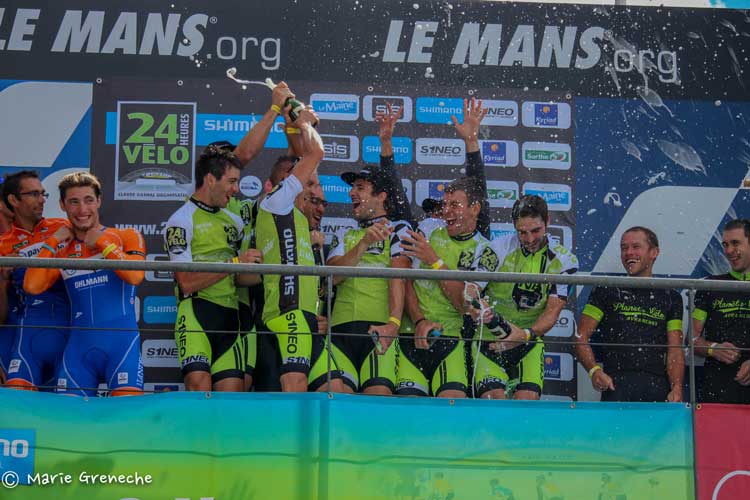 Ukrainian MTB champion Elena Novikova rode all 24 hours ON HER OWN, finishing with 160 laps (669.44km) to win the solo female category. Here she is warming up 25 hours before she rode victoriously across the line. 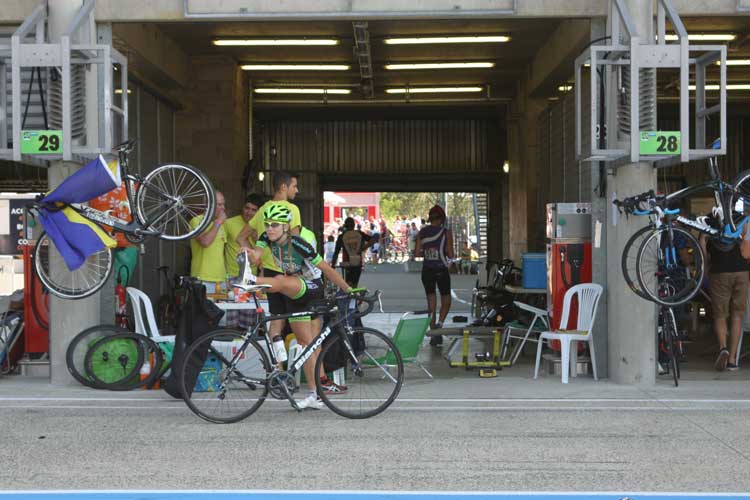 And here she is at the 23-hour mark, still moving. 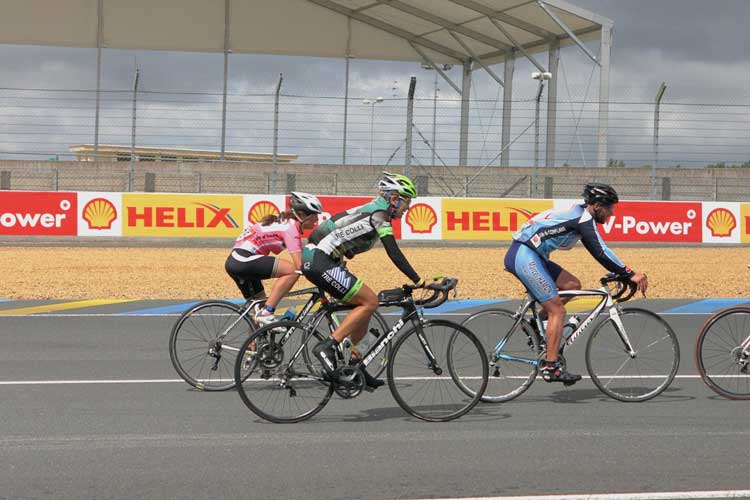 French rider Sébastien Bertholet won the solo men's category for the second year in a row, clocking up a staggering 199 laps or 832.62km in 24 hours.

These riders all won well-deserved trophies, but so did I: this photo was waiting in my email from my mini-cyclist (she was probably just pleased to learn I'd survived and would be coming home to tuck her in...) 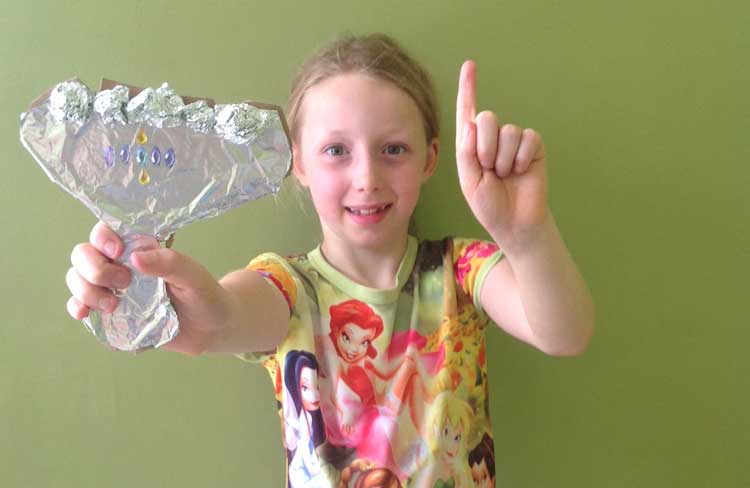 The Le Mans 24-hour cyclosportive is an exhilarating, exhausting, bewildering event, thoroughly unique and entertaining in equal measures. There's the seriousness and commitment of the top-line competitors, the determination and humour of the journeymen and women, and the camaraderie that over the course of 24 hours binds them all together. And, above all, there's the cycling.

For more information on the Le Mans 24-Hour Cyclosportive, see the official website.

Getting to Le Mans

I travelled by train from Bordeaux to Le Mans (via Paris Montparnasse on the way and via Nantes on the way back) with Voyages-sncf.com. Le Mans station is excellent, with ramp and/or elevator access to the platforms for bikes. If you're travelling by train from the UK, see Voyages-sncf.com for Eurostar travel from King's Cross St Pancras and onwards to Le Mans. See here for info on taking your bike on Eurostar, and here for bike/train travel within France. Make sure you reserve a space for your bike at the time of booking (call 0844 848 5848 from the UK or see the website). See here for bike/train reservations for travel within France.

If you're arriving by bike, check out the extensive Sarthe à vélo network of bike routes.

We stayed at Le Charleston hotel in central Le Mans on the Friday night – you can read my review here.
We pitched tents at the track campsite on the Saturday in the deluded hope of achieving some sleep during our breaks. Entry comes with free access to the campsite for all riders and two supporters (extra friends and family can pay for access). On the Sunday night – incapable of enduring another sleepless night – I checked into the Premiere Classe budget hotel, a short ride from the railway station, and slept for many, many hours.