Bob Zeller usually goes touring by himself or with a friend or two. He makes an exception for the Dieppe Raid. He tells us why. 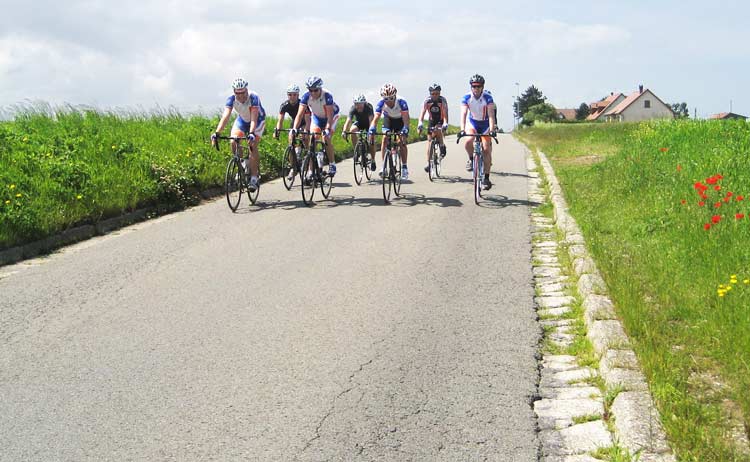 All photos thanks to Caroline at the Dieppe Raid.

One of the great weekend events for touring cyclists has to be the Dieppe Raid, or the Tour des Trois Vallées as many of the French participants call it. Commemorating the thousands of losses suffered by the Allies during an ill-fated World War Two assault on the French coastal town, the Raid offers a choice of rides through some wonderful cycling countryside. But there's much more – even for family and friends who might not be cyclists – including a couple of fascinating walks, social gatherings and a bang up celebratory dinner on the Sunday night.

Started in 1972 and co-organised by the Cyclo-Club Dieppois and an English team led by Caroline Street – all volunteers – the Raid attracts between 350 and 400 cyclists, many of whom are regulars.

It's not hard to see why the Normandy event attracts so many. It's just a really good weekend for all – whether experienced or rookies. Most come from the UK and France, but there are usually others from further afield. They come for lots of reasons. Other than the actual cycling, which is fantastic, Dieppe itself is a marvellous city. The Daily Telegraph once described it as having "unfashionable charm" and that's a really good description. There are wonderful cafés, bars and restaurants, as well as a number of first class tourist attractions. But it is the fabulous rides that the Raid organisers provide that are the real draw for cyclists of all skills and abilities on this particular weekend. 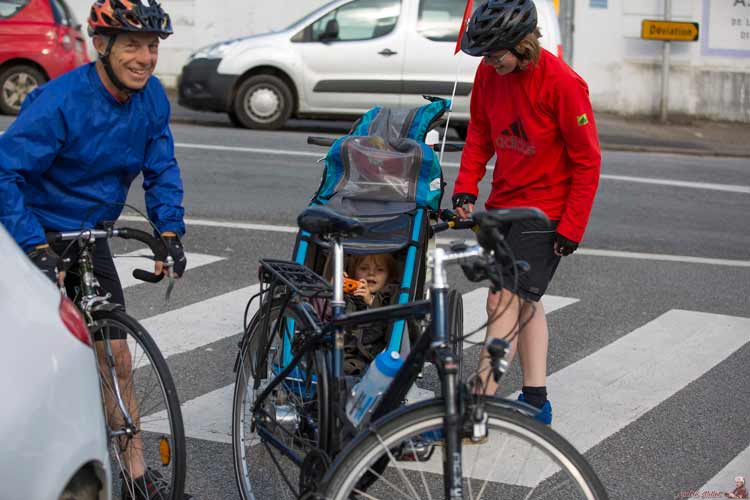 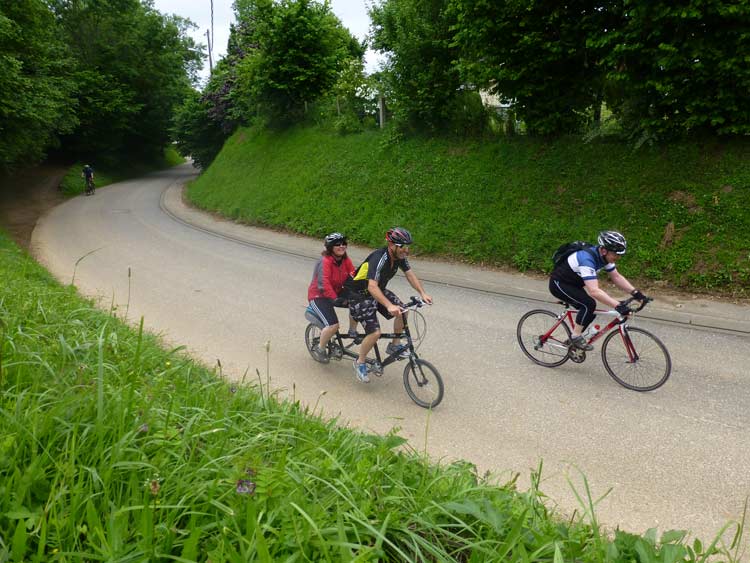 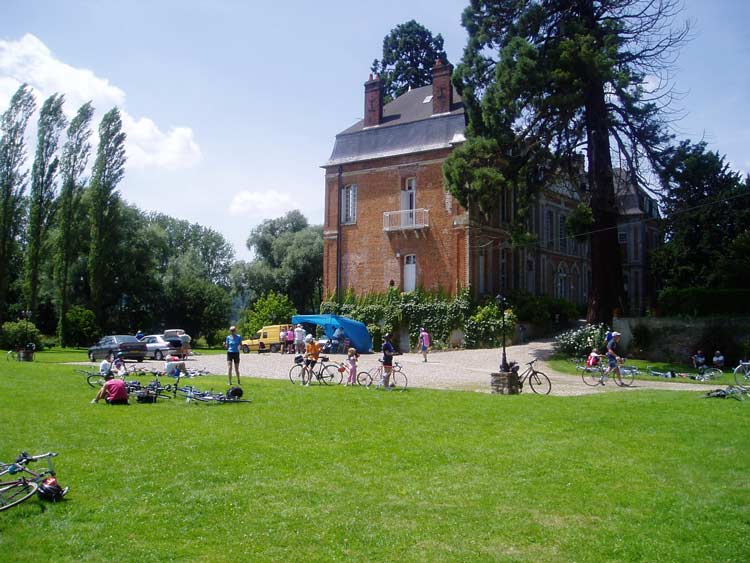 There are four choices of routes: 30km, 60km, 100km and 140km. For MTB enthusiasts there is a 40km trail. If you aren't riding, there are two walks: the shorter one stays within the town centre while the 15km one gets out into the countryside.

Everything is well planned and there are lovely touches that you don't often see on the professionally organised sportives. For instance, each ride uses the same food stop so friends cycling different routes can still meet up on their lunch break. And navigation is seldom difficult, and maps and route instructions are issued the day before. And, just in case you need some extra navigation assistance, turns and other instructions are spray painted on the roads at appropriate places. 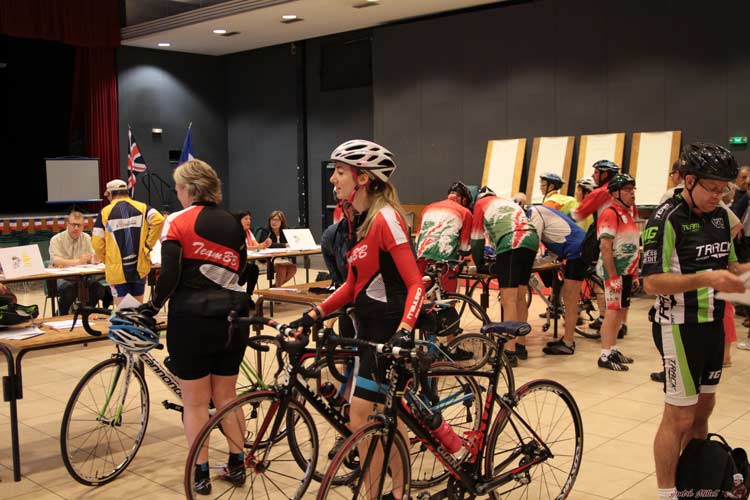 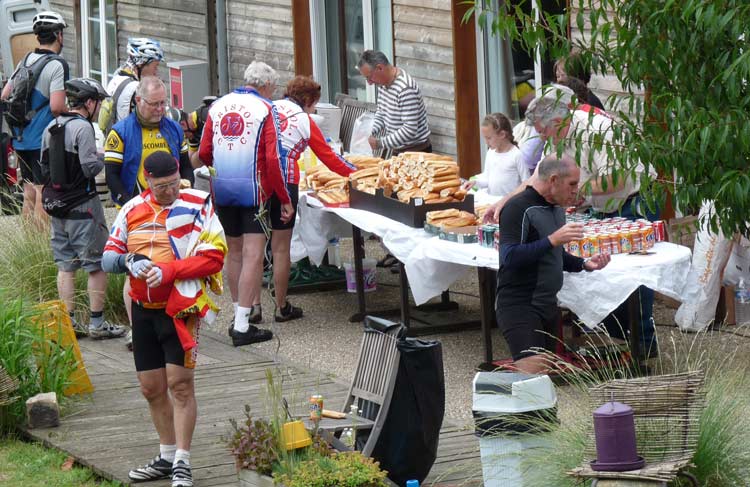 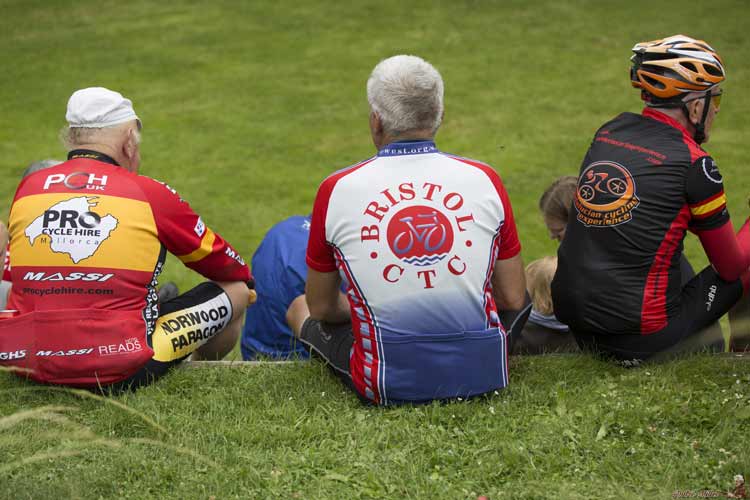 Mind you, a few years ago, when I was doing the event for the first time with my great touring friend Jim Burke from Canada, we got to a stretch of road when we realised the painted instructions seemed to have disappeared. Instead, there was fresh asphalt which the local works department had kindly put down the day before to resurface that stretch of road. I guess they were trying to spruce things up for the visiting cyclists. But we were soon back on track having been given the correct information from other riders who, being much faster than us, were doubling back to the correct turn.

I've done the Raid twice, and both times the rides were through beautiful countryside and with no difficult motor traffic. But if there is a bunch creating a bit of a delay for cars wanting to get past, the drivers never seem to be in a selfish rush. Instead, they wait for the right opportunity, and if they do toot their horn as they move ahead, it is only to wish you well.

The longer the route, the more climbing there is. One year, the 30km ride had just 12m of climbing while the 140km ride had 1300m. But the organisers put as much effort into ensuring that those who are new to this sort of cycling get looked after just as well as the more experienced. They therefore try to design the various routes to intersect at one or two points so that those who misjudge their ability can change to another course – longer or shorter – as they wish. 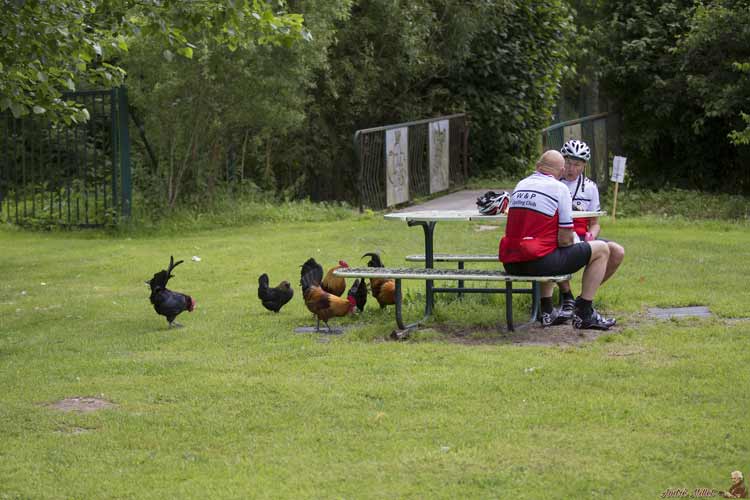 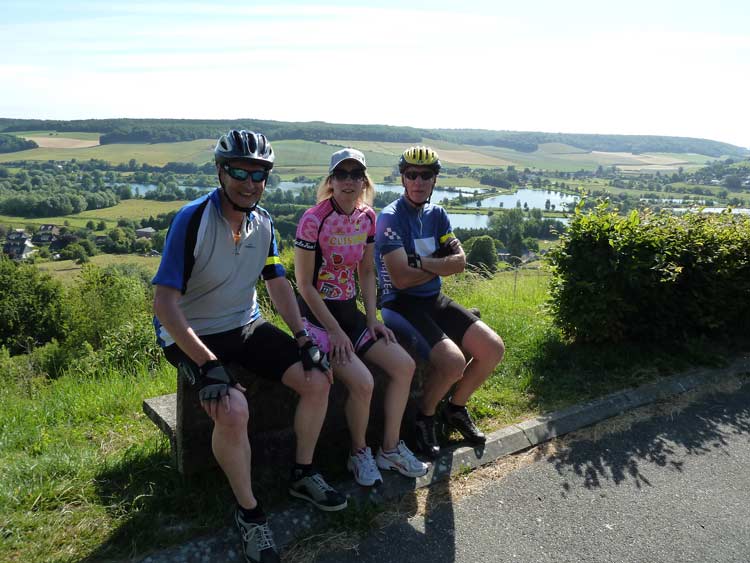 Many entrants arrive a day or two before the event to take the chance to wander about, look for old friends from previous Raids and to just enjoy themselves and the atmosphere. Some will retrace their rides from previous years and have another go at them. Families, especially those with kids, will visit the 50m municipal swimming pool or the aquarium. On Saturday morning, there's the market, which is ranked one of the best in Normandy.

It's on Saturday afternoon that things really get underway with a reception hosted by civic officials at the Town Hall. For regulars, this is a chance to meet up and have a glass of wine with old friends. For first-timers, it's an opportunity to make some new friends. Whether new or veteran, by yourself or with a large group, the reception provides just the right tone. I doubt that I have ever been to a cycling event where I was made more welcome by town officials, town folk and the other entrants.

On the Sunday, it's the raison d'être. Whether you're doing 30km or 140km, it's your day. Everyone starts together, but the fast riders are off the front quickly while others settle down to a more workable pace. Groups form while others choose to go solo. But whether you hammer your way across your chosen length, or take a much more leisurely pace, there are plenty of folk to share the ride with. If you have a mechanical, someone will give you a hand. Even if the bike is working well but you're not, someone will let you tuck in behind him or her and give you a bit of tow. 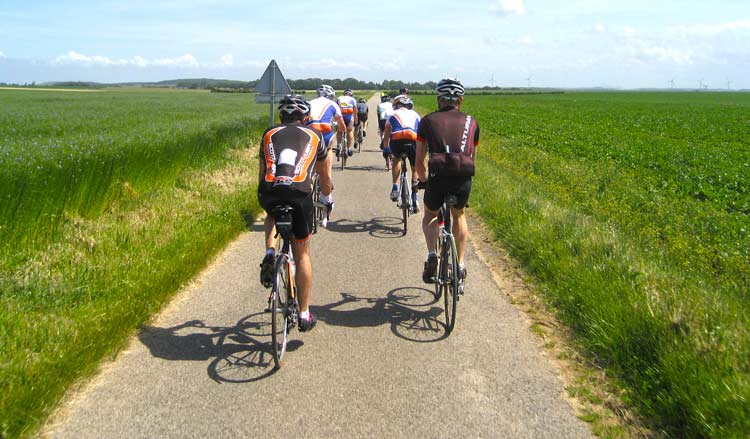 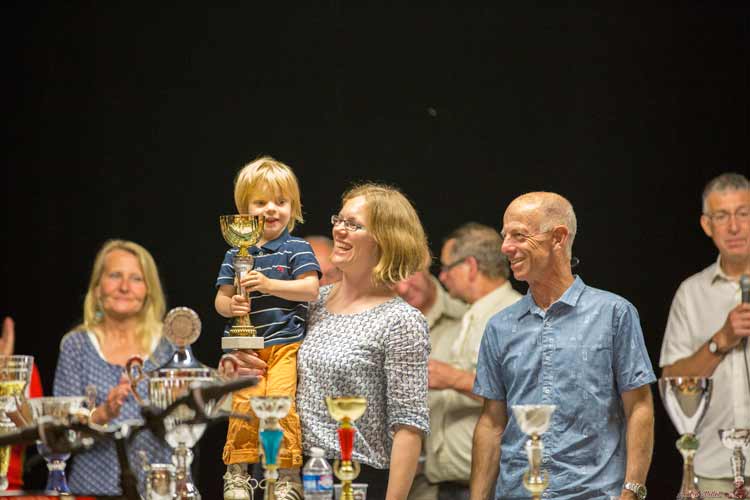 After the ride, there's the prize-giving – and there are always plenty of prizes. Some are for the youngsters and others for the adults. Some reward times while others recognise distance travelled to get to the event. Afterwards, people head off to the Hotel Windsor for the evening meal.

In the past, the organisers tried to sit everybody with club mates or other friends, but now they try to encourage people to sit not with old friends but to use the opportunity to make new ones.

On Monday, things wind down. Some spend the day on their bikes – I can tell you that a short ride to the west along the exceptionally beautiful Cote d'Albatre (part of a 2015 Tour de France stage) will take you through any number of interesting villages and small towns (there are scenes along here from paintings by Monet, Pissarro, Renoir and more). There are also any number of lovely restaurants with outdoor patios facing the water, offering oysters, mussels and other delights. But whatever you do on the Monday, you will take with you the quiet satisfaction of a weekend exceptionally well spent.

What you need to know about the Dieppe Raid 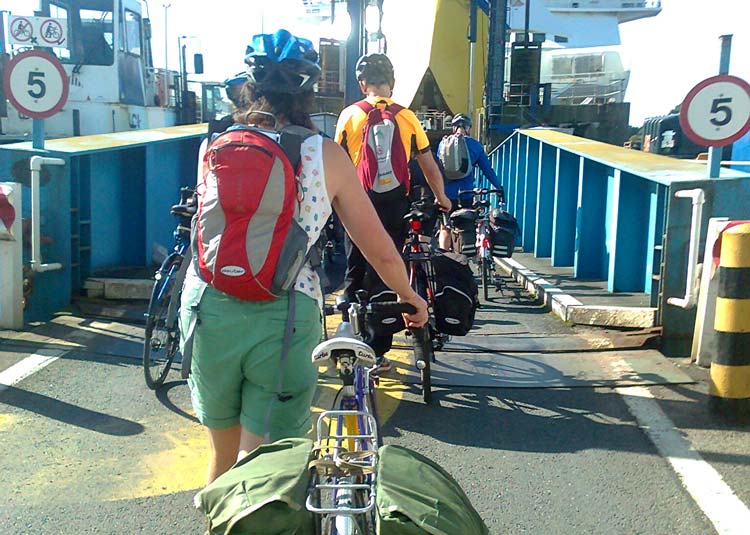 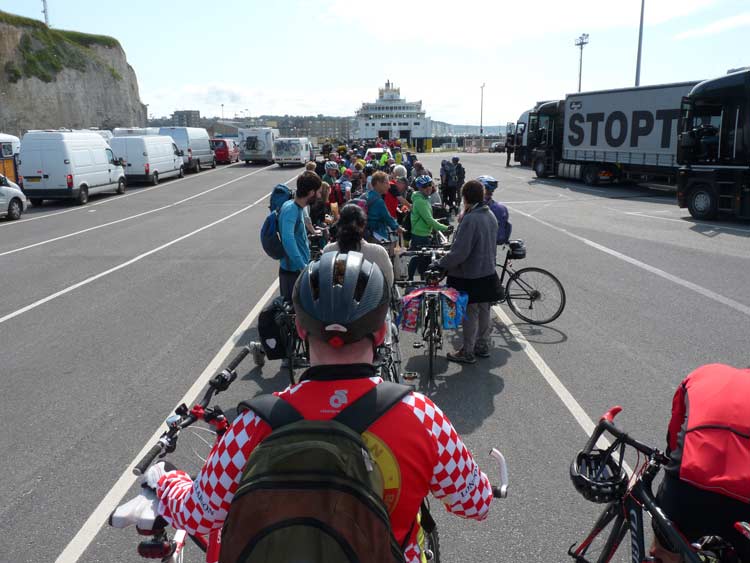 DFDS Seaways has ferries into Dieppe from Newhaven in the UK, as well as from Dover to Calais. Brittany Ferries sails from Portsmouth to Le Havre, just 100km to the west. See our ferries information page for more info and links.

Dieppe is also on the French rail system – see our bikes and trains page for info on booking tickets.

We have a number of affordable bike-friendly Dieppe hotel options on our Normandy accommodation map.

The Hotel Windsor, which hosts the Saturday evening meal, also has rooms.

Dieppe, of course, is the beginning of the French section on the now very popular London to Paris route so this might be a super opportunity to do a significant portion of what has become an iconic ride. You could cycle to Paris, and then take the train back to a ferry and England. Or, you could ride back using one of the many alternative routes.

On the other hand, you might prefer to do as I did two years ago. I was anxious to see the Pegasus Bridge, and the sight of one of the most famous D-Day battles so I headed for Rouen (one of my favourite cities in France) and then followed the Caen and Ouistreham voie verte (the bridge is on the bike path) before taking the ferry back to Portsmouth. I went to Ouistreham via Anceaumeville, Pont Audmer and Dozulé – about 170km.

Another great route involving Dieppe is the Véloroute du Littoral d'Albatre. It's actually part of the Euro Vélo 4 so while you could cycle to or from as far as Kiev (2600km), a shorter jaunt to or from Roscoff (550km) where the are plenty of ferry options between England and Ireland might be a great way to get to Dieppe or back home.

But whatever you choose, in Dieppe, you are in the midst of some wonderful touring territory. Enjoy it – I can promise you'll never get tired of riding your bike, or eating in Normandy.

Bob Zeller, a now-retired UK-based Canadian journalist, spent much of his professional life covering major European and North American professional cycle racing the (Toronto) Globe & Mail, Canadian Broadcasting Corporation, Winning Magazine and others. His beat included the the spring and autumn Classics, the Tour de France and world championships. While he has enjoyed just about all types of cycling – sportives, audax and just riding his bike to the shops – it's touring that he has always loved the most. And it's touring in France that he enjoys the most.